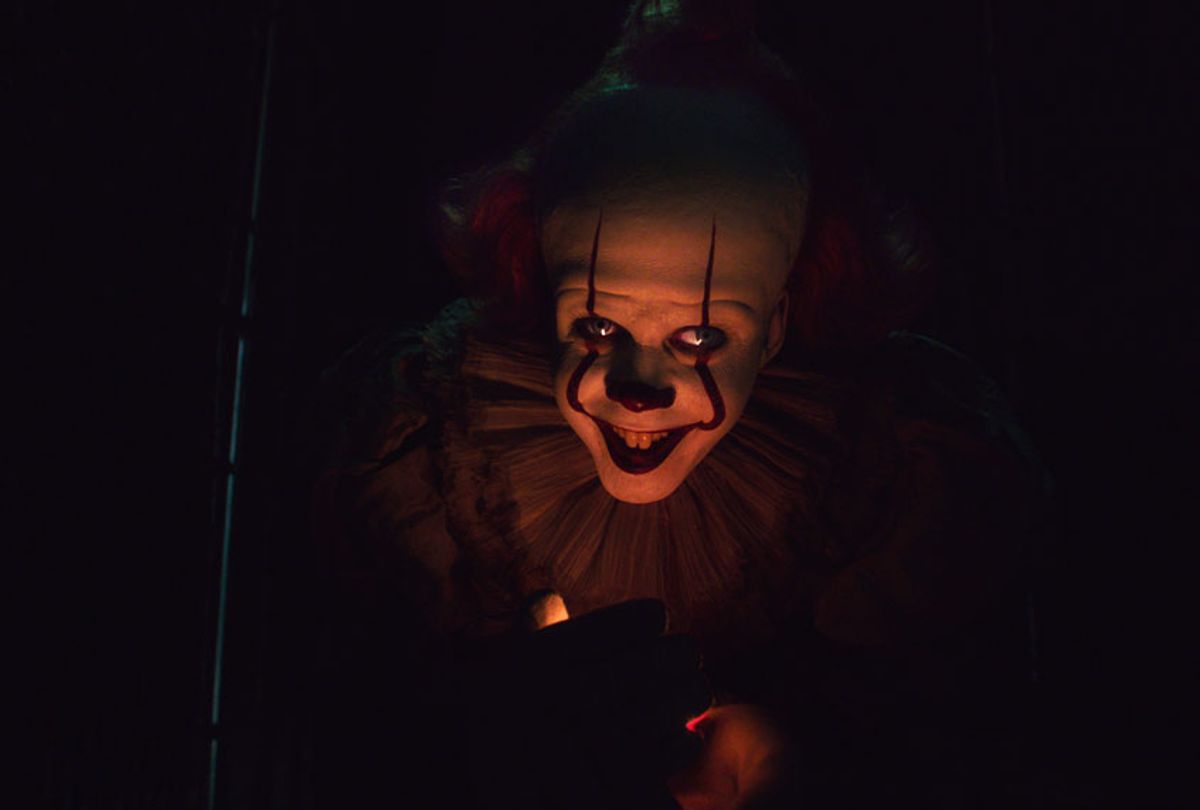 Bill Skarsgård as Pennywise in "It Chapter Two" (Courtesy of Warner Bros. Pictures)
--

“It Chapter Two” director Andy Muschietti delighted fans and worried others when he revealed to Digital Spy that the current runtime of his horror sequel is two hours and 45 minutes. At 165 minutes, “It Chapter Two” would be one of the longest studio releases in recent memory, not quite as long as “Avengers: Endgame” but more or less on par with Christopher Nolan’s “Interstellar” and Quentin Tarantino’s “Once Upon a Time in Hollywood.” When it comes to the horror genre, the runtime trounces over such classics as “The Shining” (144 minutes) and “The Exorcist” (121 minutes) and it’s even a full half hour longer than Muschietti’s first “It” installment.

“At the beginning, when you’re writing and building the beats of the story, everything that you put in there seems very essential to the story,” Muschietti told Digital Spy. “However, when you have the movie finally edited and it’s 4 hours long, you realize that some of the events and some of the beats can be easily lifted but the essence of the story remains intact.”

The director continued. “You cannot deliver a four-hour movie because people will start to feel uncomfortable — no matter what they see — but we ended up having a movie that is two hours and 45 minutes, and the pacing is very good. Nobody who’s seen the movie has had any complaint.”

Considering what an enormous box office success “It” was in 2017 ($700 million worldwide, unadjusted the biggest horror release ever), it’s not surprising Warner Bros. would release the sequel with such an elongated runtime. But is a two hour-and-45-minute “It Chapter Two” really needed? More importantly, can it even work?

For the sequel to succeed at 165 minutes, it’s going to have to approach horror in a dramatically different way than its 2017 predecessor. “It” might have been a huge box office blockbuster, but it was creatively undone by being almost entirely made up of jump scares. There’s nothing wrong with a well-crafted jump scare (see James Wan’s terrifying work in “The Conjuring”), but the gimmick becomes exhausting and ineffective the more it’s used in a single piece. A tight horror movie can get away with a reliance on jump scares (there’s a reason Blumhouse movies, often dominated by jump scares, rarely exceed two hours), but a longer horror film built on jump scares almost always runs out of steam (“The Conjuring 2” is far less effective because it runs 22 minutes longer than its predecessor without changing its approach to scares).

For “It Chapter Two” to justify its two-hour-and-45-minute runtime, it’s going to have to abandon its predecessor’s commitment to jump scares and prioritize mood and atmosphere as its primary scare factor. Two of the longest recent horror releases are Luca Guadagnino’s “Suspiria” (153 minutes) and Ari Aster’s “Midsommar” (147 minutes), both of which barely feature any jump scares and instead create fear out of a dread-inducing atmosphere. The lengthy runtimes of these movies are justified because in order to scare you they have to spend a great deal of time letting the director’s unnerving pacing and off-kilter mood sink into the viewer’s subconscious. Kubrick achieves a similar effect in “The Shining,” where continuous long takes create a hypnotic effect on the viewer and elevate the film’s atmosphere onto a level of surreality.

A long horror movie isn’t impossible to pull off, but it takes a kind of patience and commitment to atmosphere that Muschietti’s 2017 “It” showed no regard for. The first “It” installment is constructed almost entirely by repeating the same jump scare: A character roams around a shadowy location for a minute or two before a creepy figure pops out and the music blasts. Some of these beats are effective, especially Richie trying to navigate a room filled with clown dolls, but the more “It” repeats the same jump scare construction the more predictable the film becomes and the less scary it feels. By relying on jump scares, “It” becomes a series of tethered-together set pieces and not a unified film with a cohesive atmosphere. Muschietti’s approach worked fine enough for 135 minutes, but it will certainly become tiresome at 165 minutes in “It Chapter Two.” In order for the sequel to work at such a runtime, it’s going to have to do more than provide two hours and 45 minutes of jump scares. Here’s hoping a 165-minute “It Chapter Two” is less “It” and more “Midsommar.”

Warner Bros. is set to release “It Chapter Two” in theaters nationwide September 5.