Embracing paella will blow up your mid-summer grilling game

Grilling paella is about rice, fire, a mission-critical pan and a whole lot of traditional lore. Do it anyway 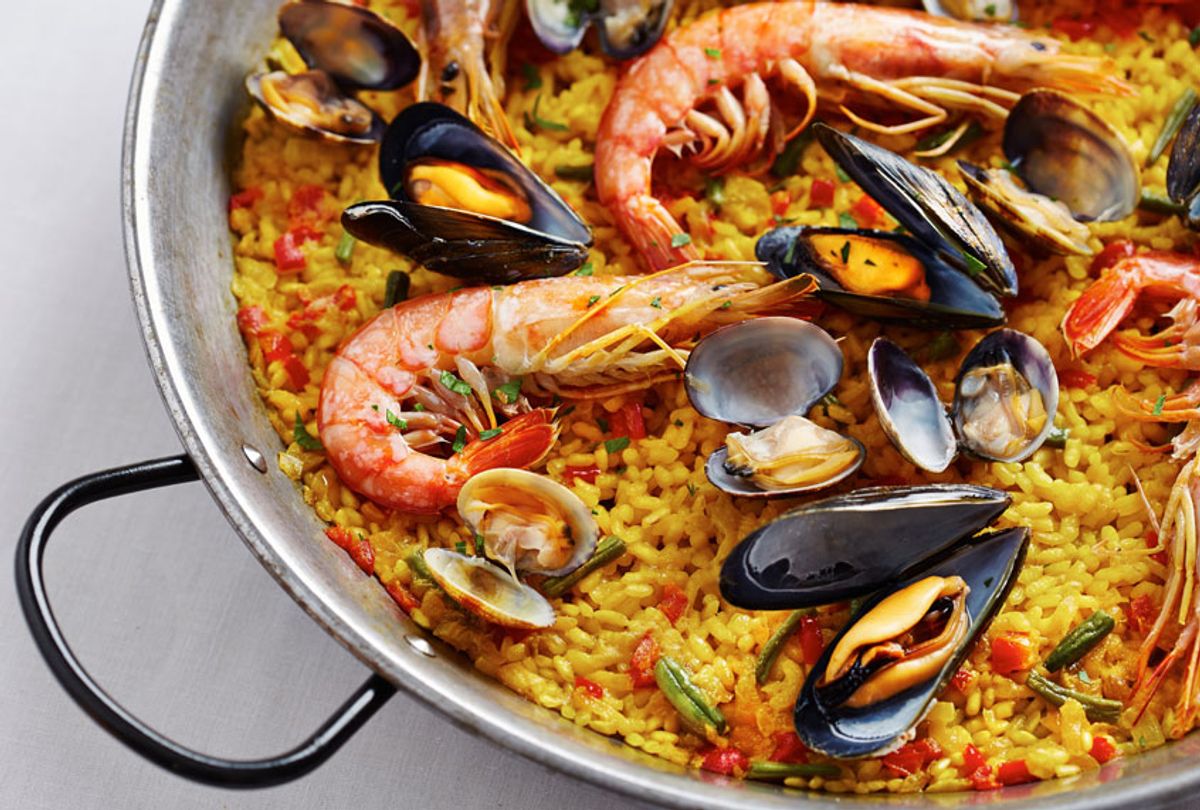 My culinary instinct for the grand gesture is what got me thinking about paella. The avalanche of traditional methodology should have scared me off. Happily, I'm not built that way.

Ten years ago my wife and I were young parents planning a single-digit birthday party for one of our kids, painfully aware that our breeder peers spend way too much time shuttling between birthdays almost every weekend for the first ten years of their childrens’ lives. We wanted to lay on a spread that would reward parents for showing up. In colloquial Spanish, Ir de paella (literally “to go for a paella”) means to have fun. I suppose that’s what sold me.

Early research buoyed my belief that paella was the proper choice for an afternoon house party in the fall. The three essential elements for paella are the rice, the pan, and fire. Simple enough. I was led to believe everything else involved in the process is relegated to a supporting role. “It’s not possible to define the authentic paella recipe because paella is not a recipe but a method of cooking linked to a particular utensil: the pan,” writes the Spanish chef and author, Alberto Herraz. “Nowadays, it is a culinary moment that warrants reinvention.”

Entertain and reinvent was exactly what I set out to do when I first started inviting folks over for paella. The paellero is the name of the outdoor grill that paella is cooked on. It is a rig that allows the hammered steel pan to be raised and lowered above the flame. The rice and complementary ingredients meld, first at very high heat and eventually raised away from the fire to achieve a busy simmer. In lieu of a paellero, I pressed my banged-up 26” diameter Weber kettle into service. With a standard Weber there’s no method to raise or lower the pan — but, I reasoned, I’d address that challenge when the time came.

In traditional Spanish settings Paellero is also the title of the person who runs the show. This newly-minted Paellero got right to work. Rice (Oryza sativa) is indeed the beating heart of the dish. The storied grain has two subspecies: indica and japonica. Indica (think basmati and jasmine) is a long-grain kernel with a more robust hide and does not readily take on flavors; that is why paella (like risotto in Italy) requires japonica’s absorbant short oval grains.

Bomba is everybody’s favorite variety for paella, because it’s like a Dyson vacuum on flavor. But calaspara is a fine, much more affordable Spanish variety commonly available outside Spain (both are available on Amazon). In a pinch, a fine quality Japanese-style sushi rice does the job — if you are using sushi rice, ignore package instructions to rinse it before use. In fact, don’t rinse any rice for paella. For an easy-going peasant supper, the rules are beginning to pile up.

Sofrito is the foundation on which rice rests. It is typically a combination of flavored oil, onions, garlic, grated fresh tomato and dried peppers, but there are countless varieties — and each of these is defended by a passionate champion as the only legitimate beginning of a true paella.

Ferran Adrià, fabled chef of elBulli in Roses, Catalonia, was known to infuse olive oil with the flavor of the Ibérico ham by soaking scraps of ham in oil for months in the fridge. The same thing can be done for garlic. Heating scraps of fresh sardines in canola or grapeseed oil until the fish heads and bones are crispy, and then discarding the bits and reserving the oil makes a great, smokey fish-inflected oil. Use grapeseed or canola oil when making hot infusions, as olive oil loses its flavor at the relatively low temperature of 176°F (80°C).

Cooking the sofrito until all the liquid has cooked off the tomatoes is key because the rice goes in the pan immediately after and is cooked until it begins to toast in the pan. If there’s any liquid left in the pan from the sofrito, the grains will start absorbing it, adulterating this first important step, say the culinary guardians.

After toasting the rice add stock to the pan to cover plus about an inch. Most of the stock will evaporate from the uncovered grill. The amount of stock you use is entirely dependent on the amount of rice you’re cooking and at what temperature. Do not get caught short. Make more stock than you could possibly use (freeze what remains and save it for later). Be sure to have stock on a monitored burner; you want to keep it energetically boiling so that you can add stock to the rice if the liquid cooks off too fast.

Adding cooler stock means the rice cooking process has to begin again. Experts say a radical temperature shift can make rice grains stickier than you’ll want. This is a hard lesson I learned years before while making risotto. Play it safe — deputize an onlooker to run the stock operation. It has always been necessary that I top off the pan in the middle of the process.

It really is essential that all the salt you are cooking with is added by hand before the rice starts to take on the stock and then starts to swell (only two or three minutes). Taste the food to make sure it’s properly seasoned; it cannot be adjusted (by adding more rice) after the rice has started to soften. Keep in mind that the dish’s saltiness intensifies as the stock evaporates.

After the rice and the stock have started to meld, the banda, or everything else — the chicken, fish, sausage that is used to flavor the rice — gets turned into the pan. These solid ingredients, often proteins but just as pleasing when they are vegetables, are viewed by purists as a tool for flavoring the rice. Some, insisting that the banda has surrendered all its useful flavor to the rice, go so far as to discard the ingredients before serving the rice by itself.

That seems a little extreme.

The Spanish smoked pepper Pimentón was husbanded from a variety of pepper that Christopher Columbus carried with him when he returned from the New World. The explorer presented this plant to the monks of Cáceras as a gesture of his gratitude for some kindness lost to history. The monks went to work refining it and the resulting peppers are now dried and some are smoked and ground into powder. In the western province of La Vera the smoked variety, picanté and ahumado, are preferred. In Valencia, in the southeast, the unsmoked, sweeter blend, dulcé is always the choice.

The inclusion of chorizo in paella is inexplicably controversial. Chef Herraz insists that rather than the sausage, it is the paprika that misguided cooks are after when the include chorizo. And so, says Herraz, chorizo fans should just add more paprika.

Since when has anybody added sausage to any dish wishing it was something else? Chorizo is pork. Pork is delicious. If you are so moved, go ahead and put chorizo in your paella.

Socarret is the all-important technique that distinguishes a successful rice casserole from an epic paella. It is the Maillard process applied to rice, crispy and caramelized at the bottom of the pan. It is the result of very tightly calibrated heat management while cooking it on a grill. If you can smell the rice toasting in the pan, your doing everything right. In order to maintain a consistent toasting temperature on a Weber I always use a grill surface with the trap door and shift the embers around to keep the temperature even.

Still more traditionalists dictate that the ideal number of servings of paella is six. Paellas for ten are not uncommon, admit purists, but if you are serving a dozen folks, they will recommend you prepare two independent paellas. A pan with a diameter of 13.5-inch is perfect for two people, pans as large as 24-inches are required when your serving more than six people. It really is about the pan.

Shrugging the chains of tradition to my feet I have been known to serve as many as thirty people from a 30-inch pan. I took some shortcuts like par-cooking the rice — a heresy, no question — and it takes half the night, but the pan is always scraped clean and I've fielded requests for a repeat performance, so I use all this rich tradition as launching pad. Just as chef Herraz proclaimed, the tradition is ripe for reinvention.