First, parents turn over guardianship of their teenagers to a friend or relative 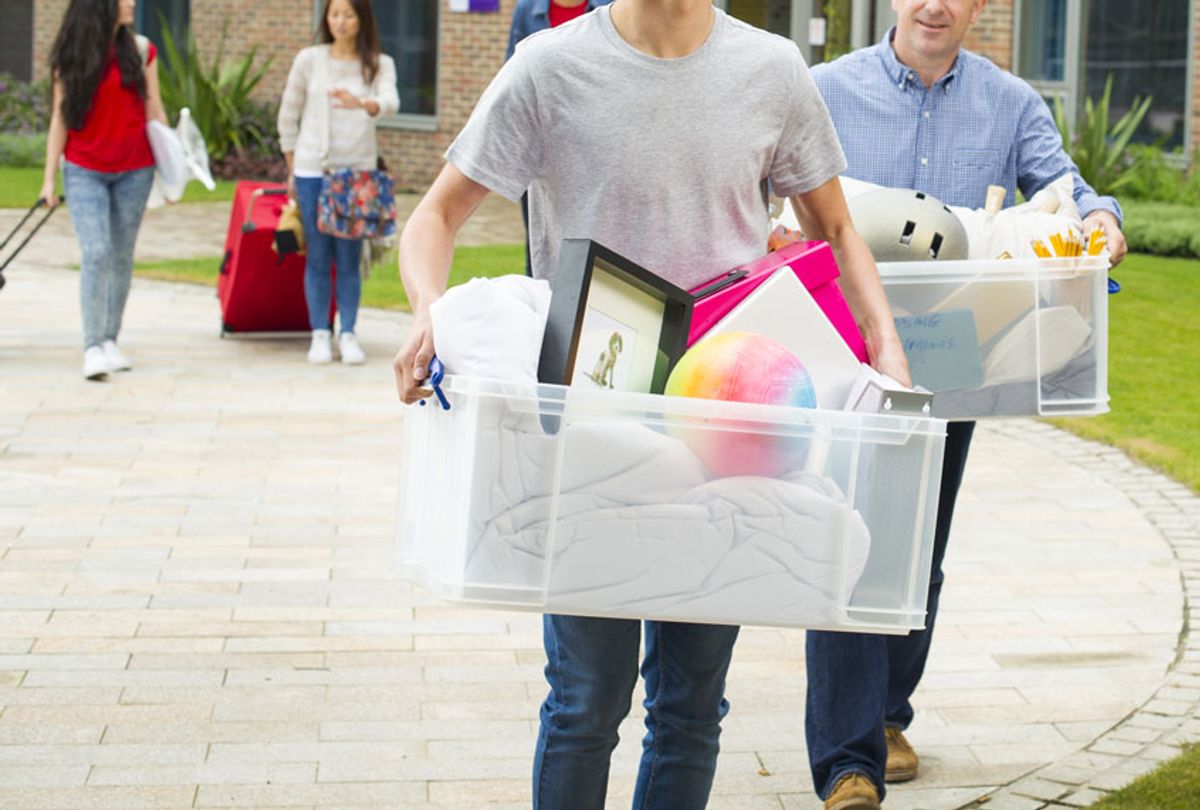 Dozens of suburban Chicago families, perhaps many more, have been exploiting a legal loophole to win their children need-based college financial aid and scholarships they would not otherwise receive, court records and interviews show.

Parents are giving up legal guardianship of their children during their junior or senior year in high school to someone else — a friend, aunt, cousin or grandparent. The guardianship status then allows the students to declare themselves financially independent of their families so they can qualify for federal, state and university aid, a ProPublica Illinois investigation found.

“It’s a scam,” said Andy Borst, director of undergraduate admissions at the University of Illinois at Urbana-Champaign. “Wealthy families are manipulating the financial aid process to be eligible for financial aid they would not be otherwise eligible for. They are taking away opportunities from families that really need it.”

While ProPublica Illinois uncovered this practice in north suburban Lake County, where almost four dozen such guardianships were filed in the past 18 months, similar petitions have been filed in at least five other counties and the practice may be happening throughout the country. ProPublica Illinois is still investigating.

Borst said he first became suspicious when a high school counselor from an affluent Chicago suburb called him about a year ago to ask why a particular student had been invited to an orientation program for low-income students. Borst checked the student’s financial aid application and saw she had obtained a legal guardian, making her eligible to qualify for financial aid independently.

The University of Illinois has since identified 14 applicants who did the same: three who just completed their freshman year and 11 who plan to enroll this fall, Borst said.

ProPublica Illinois found more than 40 guardianship cases fitting this profile filed between January 2018 and June 2019 in the Chicago suburbs of Lake County alone. The parents involved in these cases include lawyers, a doctor and an assistant schools superintendent, as well as insurance and real estate agents. A number of the children are high-achieving scholars, athletes and musicians who attend or have been accepted to a range of universities, from large public institutions, including the University of Wisconsin, the University of Missouri and Indiana University, to smaller private colleges.

ProPublica Illinois reached parents or guardians in 15 of these cases and none agreed to speak on the record. Some hung up, others declined to comment and some demanded anonymity.

Borst said the university told the three students midway through last school year that their university-based financial aid would be reduced. “We didn’t hear any complaint, and that is also a big red flag,” Borst said. “If they were needy, they would have come in to talk with us.”

The university now asks more questions of students who have recently entered into a guardianship, including whether they have contact with their parents, who they live with and who pays for their health insurance and cellphone bill. The questions have deterred some families from continuing to seek university aid, Borst said.

While the university has discretion over offering institutional aid, it is obligated to distribute the federal and state grants for needy students, known as the Pell Grant and the state Monetary Award Program, or MAP grant in Illinois, Borst said. Combined, they can total about $11,000 a year.

In Illinois last year, about 82,000 students who were eligible for the MAP grant, up to about $5,000, did not receive it because there wasn’t enough money. The grant is awarded on a first-come, first-served basis.

When filling out the application for financial aid, called the Free Application for Federal Student Aid, or FAFSA, students have to prove formal separation from their parents to qualify as an independent. One of the few ways to do that is through a legal guardianship change. Students cannot just declare financial independence — even in cases where parents are able to pay but refuse to do so, Borst said.

According to the U.S. Department of Education website, “a student in legal guardianship does not need to report parent information on the FAFSA form because he or she is considered an independent student.” Independent students are evaluated for financial aid based on their own income and resources and not that of their parents.

“It’s not like these families are close or on the tipping point” of being eligible for the aid, Borst said. “I don’t know how big this is, but I hope we can nip this in the bud now. … If it is legal, at what point is it wrong?”

The process starts in the courthouse.

The petitions filed by Rogers, whose firm specializes in real estate, are very similar, with language saying the guardianship would be in the minors’ “best interest” and typically citing educational reasons.

Many, for example, say: “The Guardian can provide educational and financial support and opportunities to the minor that her parents could not otherwise provide.”

Reached by phone, Rogers declined several times to comment about the families he represented, the process or why he sought a legal guardian for his son. 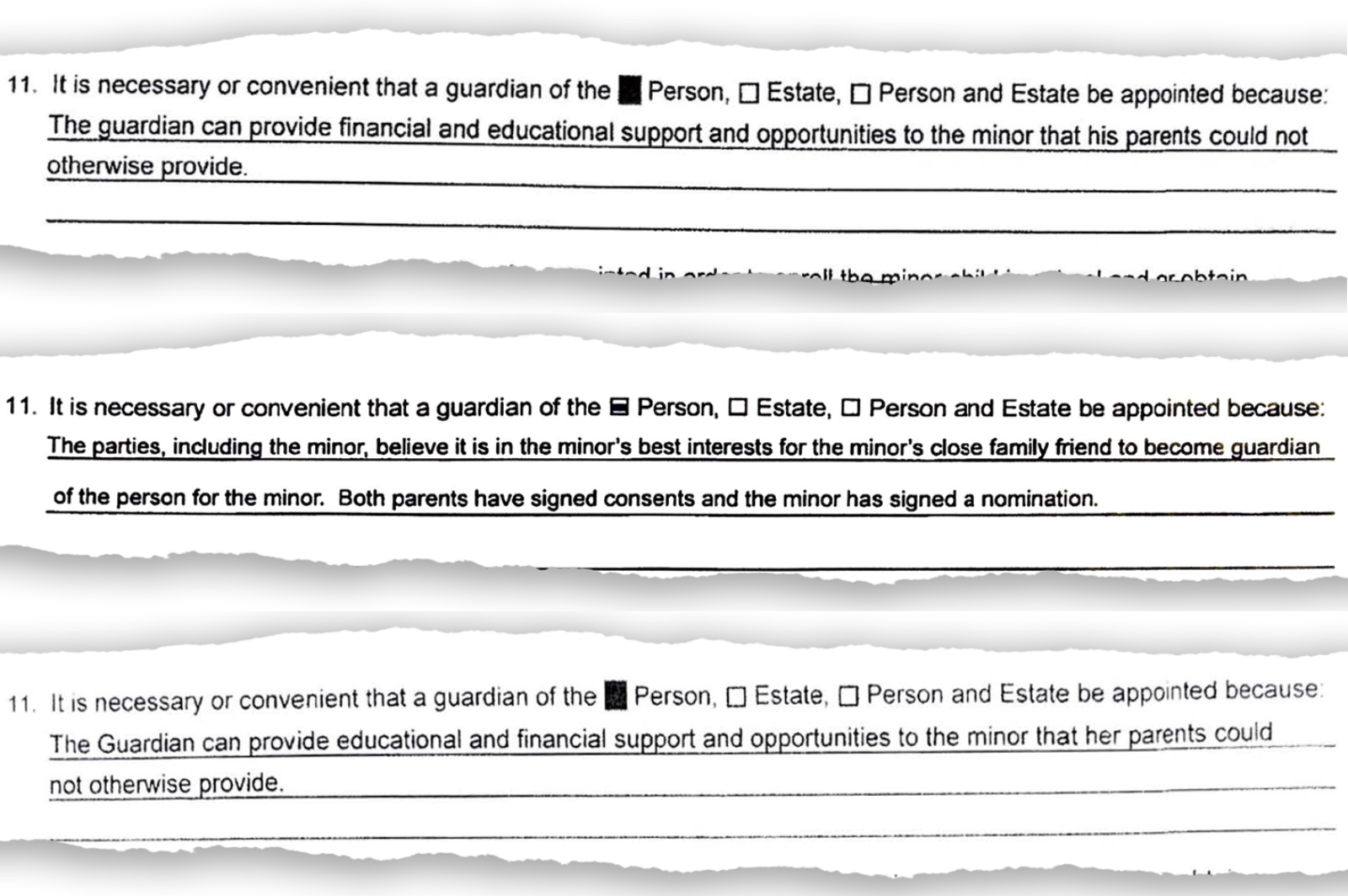 Lake County court records show parents giving up their rights to someone they say can provide their children with “financial and educational support” better than they can. The children can then get financial aid they wouldn’t otherwise get.

That is what was happening routinely in the Lake County courthouse until late last month, when Judge Joseph Salvi, who recently began hearing guardianship cases, questioned a petition involving a high school student who lives with his parents in suburban Long Grove. The judge denied guardianship and, in response, the attorney for the guardian, a “close family friend” of the student, wrote a brief arguing why the judge should use his “broad authority” to grant the guardianship.

In the brief, attorney Mari Berlin argued that the student’s parents are finalizing a divorce and can’t afford to support his college education. It said that the family is “working with a Certified College Planner to help him find a way to independently support himself through college, with specific focus on how to afford tuition.”

Berlin wrote in the brief that the student, who dreams of becoming a doctor, would be best served by a guardianship “that would allow him to attain the independent status necessary to achieve his goal.”

Berlin, of the Kabbe Law Group, said the firm has represented families in about a dozen cases in Lake County. She said the firm has filed between 20 and 30 cases in all, with varying success, throughout the Chicago area during the past two years, including in Kane, Will, DuPage, Cook and McHenry counties.

Berlin said families who are going this route are in a financial position where their income is too high to qualify for financial aid but they still will struggle to pay for college. While this is an atypical use of guardianship, Berlin said, families have a strong legal basis for bringing the cases. The law doesn’t preclude it, she said.

“It’s a solution they have been able to find as college costs go up and they are unable to pay,” she said. “It is in the best interest of the minor, which is the statute’s purpose.”

In typical guardianship cases, an adult is stepping in to care for a child after an unexpected or troubling event: Mothers are homeless, seeking mental health care or working two jobs and can’t care for a child, fathers are in prison, addicted to drugs or deported. One Lake County guardianship case describes a child suffering from “severe physical and emotional abuse” by a parent, while another pleads: “He is a good kid. He is alone. He needs someone to take care of him.”

Those are the types of cases Rebekah Rashidfarokhi usually deals with at Chicago Volunteer Legal Services, a legal aid group that she said handles more than 300 guardianship cases in Cook County annually. While she said she hasn’t seen the so-called college guardianship cases, she said the law is intended to address the life of a child as a minor and who will care for the child on a day-to-day basis, not an “11th-hour petition” right before the teen turns 18.

“That’s not the way guardianship is supposed to be used,” she said. “If someone is trying to do that at the very last minute, it seems that they might be trying to take advantage of the system.”

The children obtaining guardianships for educational opportunities have attended some of the area’s most prestigious schools, including Stevenson High School in Lincolnshire and Glenbrook North High School in Northbrook. Others go to high schools in Vernon Hills, Grayslake, Libertyville and Lake Forest.

A guardian interviewed by ProPublica Illinois said he felt conflicted when some family friends asked him to be their daughter’s guardian. He wanted to help the girl, whose work ethic and grades he admires.

“I did wrestle with this,” said the man, who agreed to speak as long as he was not identified. He said his wife works at a university and “knows it from the other side,” he said. “And her comment was, ‘Is it going to deprive someone else of … financial aid?’ And so that’s the issue. I was told it does not.”

“It’s one of these gray areas, and my heart wanted me to do it for the family,” the man said. “But I also have a conscience. I wanted to make sure we were doing the right thing.”

The man eventually agreed to become the teenager’s guardian, though the guardianship lasted only about a month, until she turned 18. He said that he did not provide financial support for her, and that she did not live in his home.

The man said he asked “a lot” of questions of Rogers, the attorney on the case, and a college consultant named Lora Georgieva with whom the family worked.

Georgieva runs a Lincolnshire-based college consulting company, Destination College, which offers “strategies to lower tuition expenses.” The company’s logo is a graduation cap with dollar bills spilling out of it. In video testimonials, clients praise the company for saving them money.

She is tied to at least several of the families, as well as to Rogers, the attorney, who is also featured in the video.

The description for the company’s “premier” services includes a “College Financial Plan, Using Income and Asset Shifting Strategies to Increase Your Financial and Merit Aid and Lower Out of Pocket Tuition Expenses.”

Reached Monday morning, Georgieva said she was “in the middle of something” and would call later. She then contacted an attorney, Phillip Zisook, who called ProPublica Illinois on her behalf to say she was worried about being depicted in a false light.

Zisook said he would relay ProPublica Illinois’ questions to Georgieva. As of publication time, she had not responded.

Mark Kantrowitz, a leading financial aid expert and publisher and vice president of research for savingforcollege.com, called the guardianship changes “an extreme measure.”

“This is the first time I have heard of something so brazen,” Kantrowitz said. “It’s completely unethical.”

Christian Basi, a University of Missouri spokesman, said the school is investigating to ensure that guardianships are not filed “simply to try and gain financial advantage.” He said university officials are flagging accounts that may have benefited from this practice and have been in contact with other schools in the Midwest.

“We are and would be extremely disappointed with anyone who would try to change their information with the sole purpose of taking money from a need-based program when they would typically not be eligible,” he said.

A spokeswoman for the University of Wisconsin-Madison said the university may review and adjust its financial aid award at any point if evidence emerges that a student is actually receiving parental or other financial support not reported on the FAFSA.