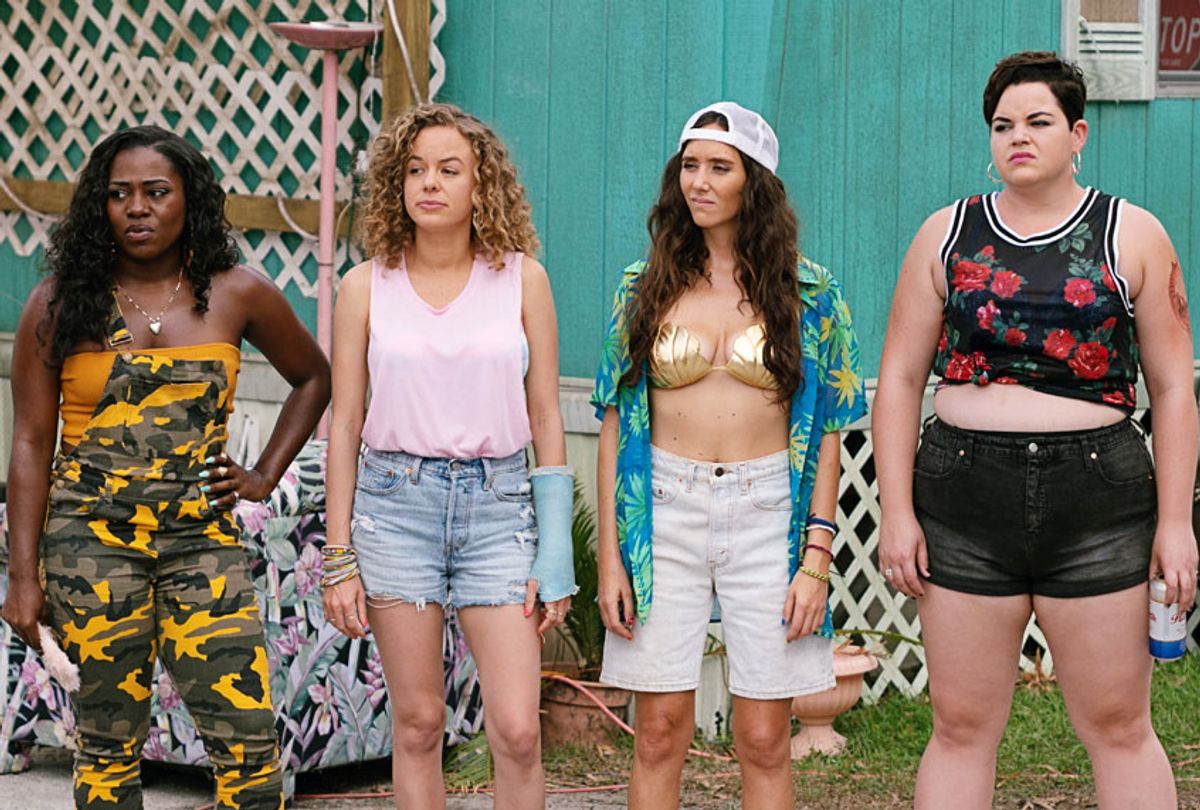 During the first season run of “Florida Girls” on Pop TV, series creator Laura Chinn said she’s been gratified and humbled by the emotional messages she’s received from fans, especially women who find her comedy within the content flood.

But one particular message let her know that she’d struck a chord with viewers. “Underneath a photo of me on Instagram, a man wrote, ‘This woman got me watching a show with all females. LOL.’”

As she recalled this during a recent sit down with Salon, Chinn and her “Florida Girls” co-stars Laci Mosely and Patti Guggenheim start cracking up. “I sent it to them and Laci was like, ‘We're getting the problematic men!’”

As well they should. “Florida Girls” has been airing its too-short first season on Wednesdays at 10 p.m. since early July, and it’s the exactly the kind of comedy everybody should be watching. (Episodes can be streamed via the Pop TV website or its app.)

It’s legitimately hilarious, bluntly forthright and neon-bright enough to quickly reel a viewer into the broadly comedic misadventures of Chinn’s Shelby and her best friends Erica (Guggenheim), Jayla (Mosely) and Kaitlin (Melanie Field, of “Shrill”) perhaps without realizing they’re watching a feminist, profoundly thoughtful take on what it’s like to scrape and struggle to get by in America.

Their highest goal (at the moment), one they hope to realize in Wednesday’s season finale, is to help Kaitlin capture the mantle of hosting the local Island Party, a massive kegger held on a small unclaimed off-shore spot, previously hosted by a local guy who died young and stupidly.

For Shelby, Erica, Jayla and Kaitlin, young women who live in a trailer and work at local dive bar where they put up with the owner’s harassment in exchange for doing whatever they want, this is viewed as an epic achievement. All of them are high school dropouts, and only Shelby sees the value in pursuing her GED, inspired by a fifth friend who graduated from high school and left for greener pastures they can only fantasize about.

But the others are too stubbornly devoted to the pitfalls and limited choices they’re familiar with to aspire to do anything different with their lives. Erica is a sweet, honest, illiterate kleptomaniac. Kaitlin is stubborn and solves most of her problems through physical aggression. Jayla aspires to marry her way out of poverty and, until then, do as little actual work as possible.

Assuming you’re of a middle-class income bracket, these character descriptions may sound exploitative, depressing or rife with slapstick. And that’s precisely why Chinn wanted to make a funny, heartwarming comedy about Florida, the most belittled state in America, the place that made the "Florida Man" meme a shorthand for ignorance and idiocy.

The place where she was born and raised.

“Florida, a lot of the time on television shows, is like Miami: bright and colorful and beautiful and, like, there's wealth, or there's cops, or whatever,” Chinn said. “In my personal experience of growing up in Florida without a lot of money, it wasn't glamorous… I couldn't relate to it at all. And it felt like something must be wrong with my life because no one wants to talk about it. It can't be in a comedy. It has to be a drama, or it has to be a documentary where we're studying poor people, and isn't it so sad to be poor?”

“But my life didn't feel that way,” Chinn continued. “I had lots of fun. I had an amazing group of friends. It was super non-traditional, in that my parents weren't married. I had no supervision. We were getting into trouble at a young age, but it was like there was still so much love and heart and joy and tough situations. So I always had the goal of bringing light to that life and doing a series about it.”

“The women I grew up with didn't act like ‘girls,’” she said. “They peed in the woods, you know, like climbed into windows and stole shit and banged up their knees and you know, they just acted like flawed people.”

One of the greatest compliments Chinn says she’s received about the 10-episode first season of “Florida Girls” is the summary that it describes the red states to the blue states. A couple of years following the widespread hand-wringing over TV’s failure to adequately tell the stories of working class America, here is a half-hour portraiture of the working poor that’s closer to the way these communities look.

Shelby is biracial, a character trait Chinn said was not negotiable. “Florida is a super diverse place, and it  would have been a full-on lie for to be like, everyone in Florida is blonde and white. Because it's just not true.”

“The takeaway is, without getting too political, is that I just think we have to realize that we're one country and we have to find some way to get along and see that…we’re all humans,” she adds.

Our television-abundant era favors big series and broad ones, shows blessed with name-brand talent and healthy budgets for glossy sets and glamorous locales. Pop TV's biggest hit, after all, is "Schitt's Creek," a farce about a wealthy family that lost everything and experiences a ludicrous level of difficulty acclimating to their new state of poverty.

Sunday’s season premiere of HBO’s “Succession,” a dramedy that follows the machinations of one of the wealthiest fictional families on earth, represents this concept at its apex. The Roys rank among the so-called “beautiful people,” who travel by limos and helicopters and choose from a buffet of properties they own where they can get away from the prying public or one another. They also can’t stand each other and actively plot against their father and whichever sibling demonstrates the most weakness.

But they’re also evocative of an extreme exclusive status society presented in popular culture as symbol of success.

“I know for a fact," she added, "that having little money doesn't mean that you're having a little life."

On the whole, TV prime time revolves around slices of American life considered to be closer to the norm but still don’t reflect reality for a sizable portion of the population. Their characters live in fancy apartments located in some of the nation’s most expensive zip codes, yet exactly how they’re able to afford those lifestyles is never justified or explained.

“Florida Girls” owes a debt to some of these series; Chinn name-drops “Sex and the City” and “Friends,” obvious references for a show about four closely-bonded buddies living together. Each of those shows was preceded and in some respects influenced by “The Golden Girls,” the iconic comedy that helped solidify a baseline image of the Sunshine State for millions of people.

The Florida postcard in our minds probably draws from “Miami Vice” too, as Chinn infers. Owing to the grace of syndicated repeats, though, the TV viewer’s concept of Floridian community is more likely formed by Blanche, Rose, Sophia and Dorothy as opposed to Crockett and Tubbs.

But the “Florida Girls” world exists at the opposite side of the character age spectrum obviously, while also representing life at the other end of the economic scale.

The “Golden Girls” split a comfortable living space in a retirement community; Shelby, Kaitlin, Jayla and Erica squeeze into a trailer that doesn’t have enough mattresses for all of them.

Forget retirement — the first episode involves the quartet’s quest to scratch together enough cash to pay their $70 electric bill.

Mosley also cites the fact that the series is entirely about women dealing with their own problems, the least of which is seeking out male companionship or salvation through some notion of happily ever after.

“A comedy doesn't have that heavy patriarchal vibe of, like, nothing in your life is good without a man controlling it or being a part of it,” she said. “These are women who care about other women and who are living rich, fully fleshed out lives.”

Chinn agreed with her. “Everything is filtered through that survival thing. So even when we're talking about men, it's like as a means to survival, you know?  It's not like, ‘I'm heartbroken. I need this guy.’ It's like, ‘I need the money so then I can get what I need to survive.’”

A huge part of that message, Chinn and Mosley point out, is reminding viewers to appreciate the luxuries people take for granted, like a garbage disposal or a refrigerator, or a mattress.

“And get so excited about the smallest things? Like getting Pop Tarts!” Guggenheim said. “That's so huge for them. And those are the tiny little wins!”

“We watched the show with someone in LA,” Chinn recalled, "and that scene where we get all this [junk] food and we're so excited, he was like, ‘I haven't been that excited in a long time.’”

Kaitlin’s pursuit of the Island Party, Jayla's relentless pursuit of economic stability by any shameless means necessary and Shelby's yearning to earn her GED are modest aspirations by Hollywood storytelling standards. But for “Florida Girls” and their audience, it’s enough. “The best reception that we've gotten so far are from girls who were like, I grew up with an alcoholic mom and my dad was in jail, and my stories have never been told. And if they are told, it's from the perspective of 'aren't you so sad and shouldn't we feel so bad for you'? Getting messages from these people, especially women who are feeling empowered and relating to the series in a new way… I mean, it makes me want to cry.”