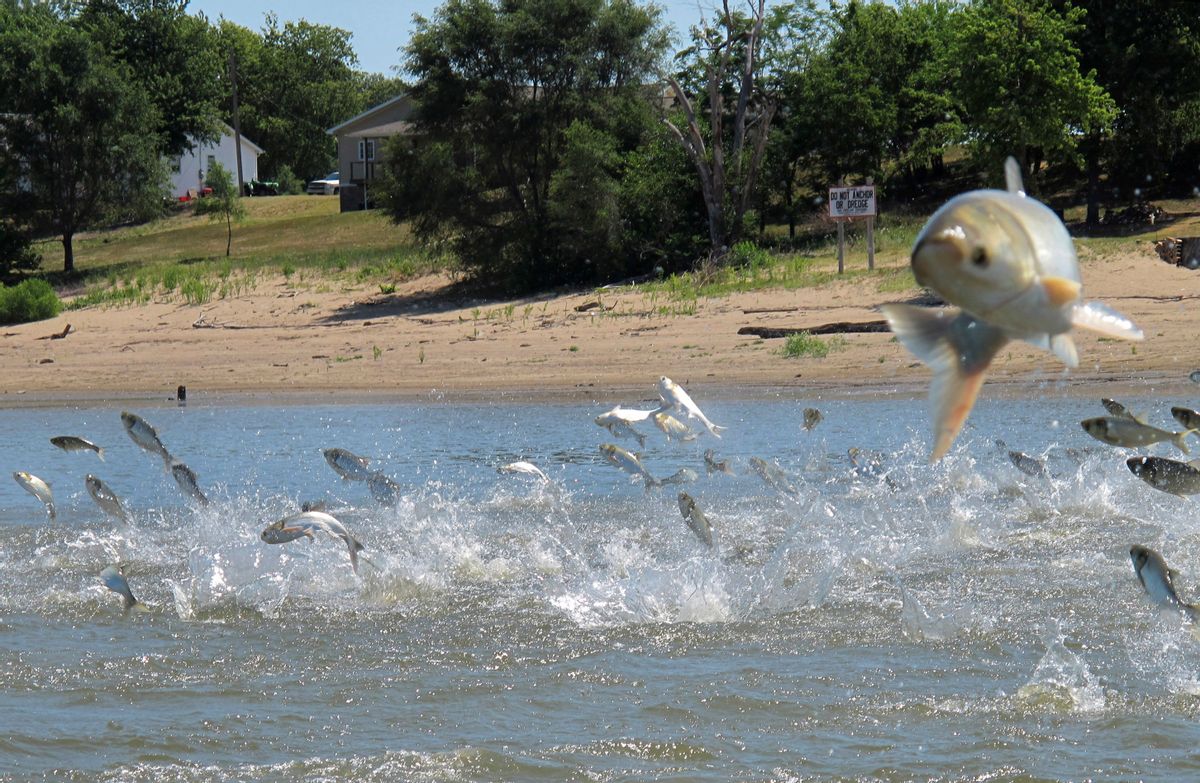 FILE - In this June 13, 2012 file photo, Asian carp, jolted by an electric current from a research boat, jump from the Illinois River near Havana, Ill. An effort is under way to reintroduce alligator gar into lakes, rivers and backwaters of several states possibly to help control populations of the invasive carp. (AP Photo/John Flesher, File) (AP)
--

Republicans sat on a report for months about how to block Asian carp from our nation’s Great Lakes, but now environmentalists are hoping Congress approves money this year to fund preliminary work for a $778 million plan to stop the fish at a dam near Joliet, Ill.

Todd Semonite, commanding general of the U.S. Army Corps of Engineers, is recommending the plan which includes building a channel with additional electric barriers, flushing lock systems and using underwater speakers to bombard the fish with noise.

“With the Asian Carp on the doorstep of our region’s most vital natural resource, we have a small window of time to stop this invasive species before it inflicts irreparable damage on our Great Lakes and our $7 billion fishing industry and equally important tourism industry,” said Rep. Marcy Kaptur (D-Ohio) who chairs the Appropriations Subcommittee on Energy and Water Development.

An appropriations bill approved by the House in June, H.R.2740, contains a $10 million increase in the corps investigations account that could be used to fund preliminary work on the proposal. The bill passed 226 to 203 with all the Republicans and seven Democrats voting against it.

The American Waterways Operators, which represents the barge industry, gave $108,500 in campaign contributions to the representatives who voted against the appropriations bill. The Senate, where the barge industry’s PAC has donated $50,500, will now consider the bill.

Semonite, the corps commander general, is not recommending detaching Lake Michigan from waterways that flow from the Illinois River which researchers say has the highest concentration of silver carp on the planet. Five states – Michigan, Wisconsin, Minnesota, Ohio and Pennsylvania – unsuccessfully sued the corps to try to get it to close off a canal that acts like a superhighway for invasive species.

More than a century ago, Chicago rerouted its sewage through the Chicago Sanitary and Ship Canal so the city wouldn’t dump it into Lake Michigan, opening a conduit between the Great Lakes and the Mississippi River basin.

Asian carp can grow up to 4 feet long and 100 pounds and eat the food native fish depend on. The fish were brought to the United States to control algae in catfish ponds and waste-treatment plants in Arkansas and Mississippi. They escaped into rivers after flooding or were released and made their way up the Mississippi River.

Release of the corps report was blocked for months in 2017 by Republicans and the Trump administration and released only after the U.S. Senate Appropriations Committee approved a bill to force its release. The original cost of the plan to block Asian carp from reaching Lake Michigan was $275 million but now is projected to reach as much as $832 million.

The leading edge of adult bighead and silver carp is about four miles from the Brandon Road Lock and Dam on the Des Plaines River near Joliet. Traces of DNA from Asian carp have been found in Chicago’s Lake Calumet, just 7 miles from Lake Michigan. Another type of Asian carp, grass carp, has been found in the lower four Great Lakes, and evidence suggests it is spawning in Lake Erie.