Plastic debris is altering the blood composition of seabirds

Seabirds have lower blood calcium levels, body mass and wing length — but their demise is bad news for us, too 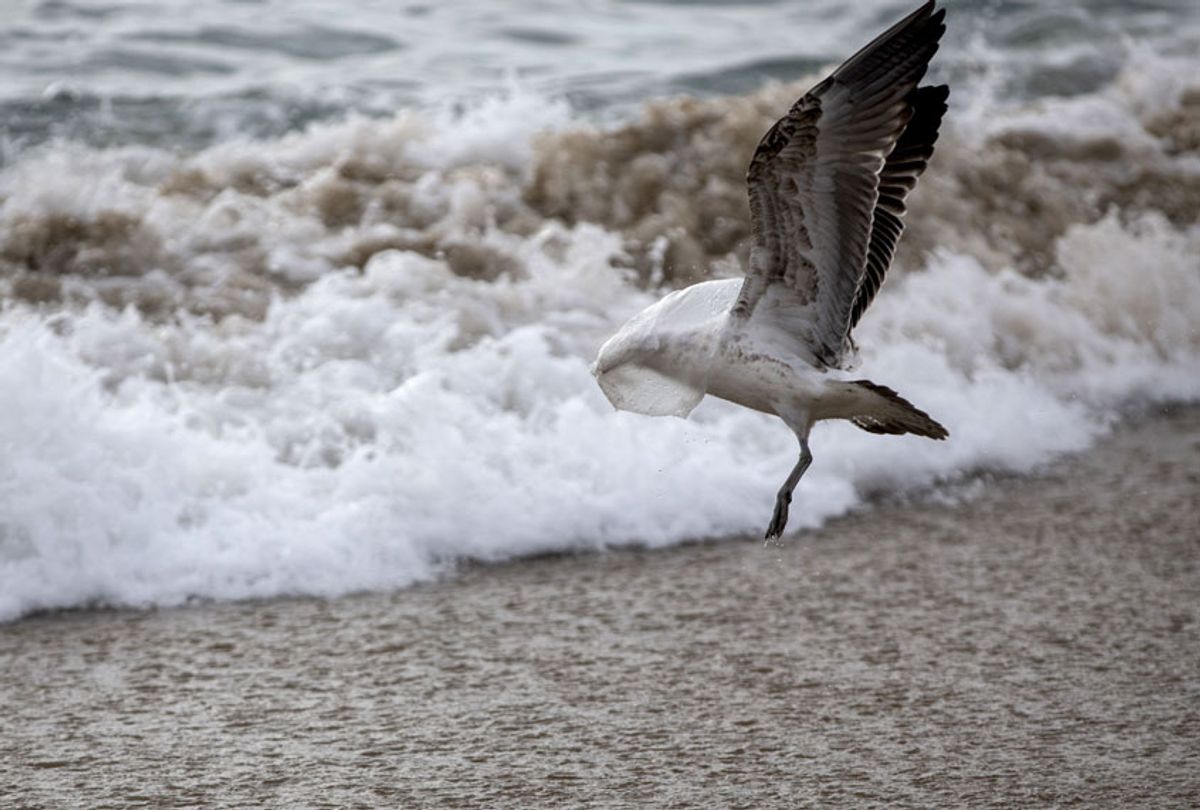 A seagull struggles to take flight covered by a plastic bag, on the seashore at Caleta Portales beach in Valparaiso, Chile on July 17, 2018. (Getty/CLAUDIO REYES)
--

Harrowing photographs of seabirds with plastic in their mouths, splashed across newspapers and magazines, have raised public awareness over plastic pollution's squirrelly tendency to harm sea life. In particular, seabirds, like albatrosses and fulmars, are dying from swallowing plastic and getting tangled in plastic debris. This month, scientists deepened their research around how plastic ingestion is affecting the marine avian population.

In a new study published in the journal Environmental Science & Technology, scientists outlined how ingesting plastic seems to be altering the health and overall physiology of seabirds. The study analyzed blood and plastic samples collected from Flesh-footed Shearwaters, whose populations are declining across the Southwest Pacific Ocean, off the coast of the tiny Australian island, Lord Howe Island.

“We caught birds as they left their nest to depart the colony for the sea for the first time, when they were about 90 days old,” co-author Alex Bond, senior curator of birds at the Natural History Museum, explained to Salon in an email. “By gently flushing their stomach with water using a hand pump, we can make them regurgitate anything in their stomach (they’ve not been fed for a few days at this point, so we rarely get their dinner!). By taking a small blood sample, we can then compare the compounds in their bloodstream to the amount of plastics we found in their stomach.”

The study found that the seabirds had reduced blood calcium levels, body mass, wing length, and head and bill length. Plastic worsened the birds’ kidney function, in addition to affecting their cholesterol and enzymes levels. Until now, there has been little information about the blood composition of seabirds who have ingested plastic. Partly because mortalities usually happen out at sea, and the carcasses are decomposed before scientists can get to them. Perhaps the most surprising finding, though, was that for some blood parameters the mere presence of plastic had an effect.

“In other words, the values weren’t necessarily related to how much plastics the bird had ingested, but just the fact that it had ANY plastics in its stomach,” Bond said. “This gets us closer to understanding how much plastics is needed before it starts affecting wildlife.”

What is it about plastic that is altering blood composition in these birds? Scientists still don’t know.

“This is the million dollar question” Bond said. “It could be a combination of the plastics themselves or the contaminants they bring with them. Ultimately that’s the next step is for us to understand what this means for the birds themselves, and figure out what they’re trying to tell us.”

Understanding the impact of plastic on a seabird’s health is also crucial because various populations continue to decline, and time might be running out. Seabirds are at a high risk for eating plastic because it can often look like food they would normally eat.

Noreen Weeden, volunteer director at the Golden Gate Audubon Society, said the organization holds cleanup events each month in the San Francisco Bay Area to keep seabirds in Northern California safe. Weeden said within the past year, volunteers have removed 128 bags of trash and 24 bags of recyclable materials from beaches.

“Much of the plastic debris is quite small, and it is colorful and it can be easily confused as something they would normally be eating that floats in the water,” Weeden told Salon.

When it comes to seabird dying by plastic ingestion, the numbers are high. An estimated 70 percent of Northern Fulmars who have died and washed up on shore have plastic inside them, a trend that has been on the rise over the last several decades.

“Plastic ingestion in these fulmars is among the highest recorded globally,” researchers asserted in 2017. “Compared to earlier studies in the North Pacific, our findings indicate an increase in plastic ingestion over the past 40 years.”

Globally, researchers now estimate that 90 percent of the world’s seabirds have pieces of plastic in their stomachs. In 1960 they estimate only 5 percent had plastic fragments in their stomachs. As for what this means for the future of seabirds, which are descendants from theropod dinosaurs, is unclear. However, given that an estimated 4 million to 12 million metric tons of plastic waste wash into the ocean around the world every year, it is hard to imagine the problem will get better before it gets worse.

In an interview with National Geographic, Adam Nicolson, author of “The Seabird’s Cry” explained that seabirds are very resilient.

“Albatrosses can live 80-90 years, so they can spring back from one failure or disaster for a year or two,” Nicolson said. “But the pace at which ocean systems are changing may be too much for those resilient systems to work.”

“One encouraging thing is that after the great extinction, 66 million years ago, when most life — including the dinosaurs — died, quite a few bird lineages survived,” he added.

As for the seabirds that Bond and his colleagues studied, the survival outlook even with their changes in blood composition are unclear.

“Ultimately, we don’t know what effect the changes in blood calcium or other components means for the birds, which might seem quite surprising,” Bond said. “But because these birds spend their entire life at sea, we don’t know what ‘normal’ is. When people go for blood work, their results are compared against thousands or millions of other results to give an indication of health. We don’t yet have those data for most seabirds.”