From the beautiful surrealism of OWN's new drama to the absurdity of AMC's "Lodge 49," TV is good and weird 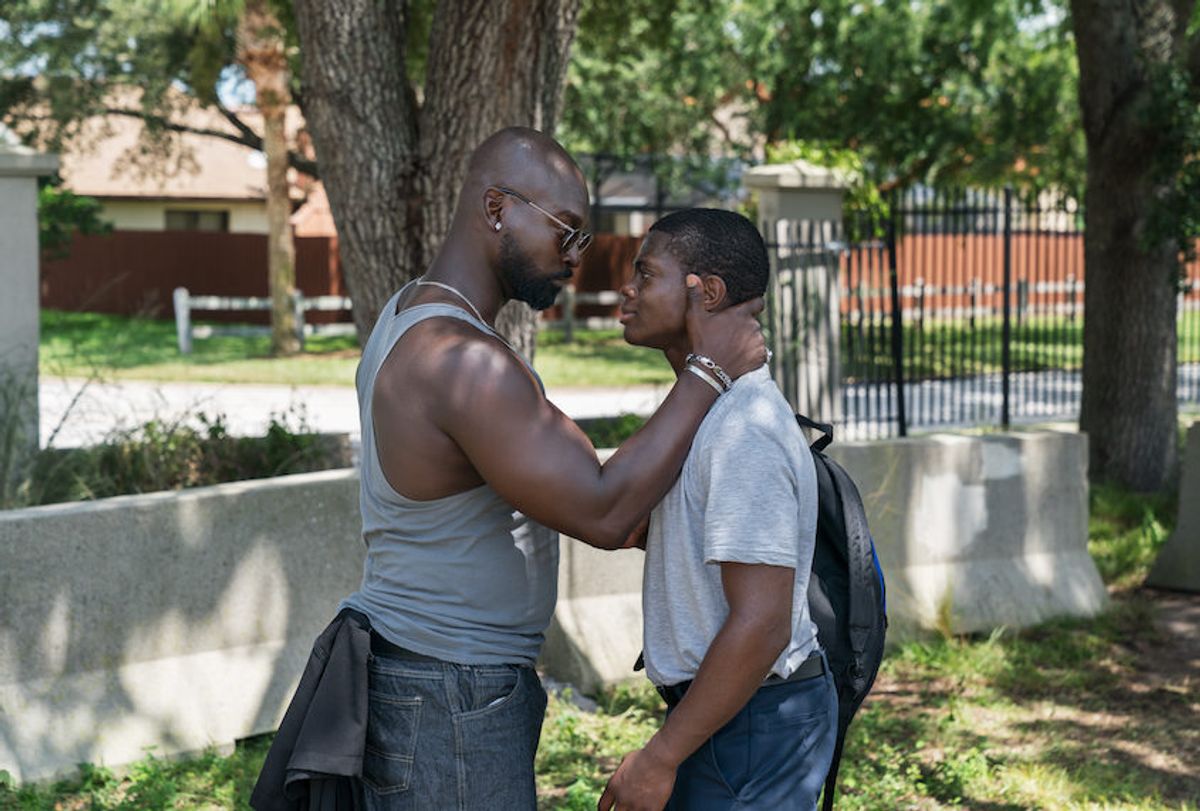 If you ever want to make a TV critic’s eyes roll to the point that she’s staring backwards at her own brain meat, go ahead and describe a series like this: “Think of it as a (blank) hour movie.”

No. Just, no. Nonononono. This is excuse-making. A producer or a show’s fan might think that this somehow suggests that the show in question requires patience and a certain interpretive sensibility to get why the plot is dragging even though the cinematography is so damn pretty. In truth, the “it’s a 20-hour movie” gambit is actually weak tea; an attempt at an explanation as to why a show doesn’t fully justify its existence until multiple hours have passed, if ever.

Having said that, there is a legitimate kind of freeform artistry afforded in filmmaking that is rarely expressed effectively on television. A network has to commit to nurturing it, as HBO has done with Terence Nance’s “Random Acts of Flyness” but, as the title suggests, its six-episode season isn’t linked by a cohesive narrative, and the sections within episodes only have a theme in common. And it’s no accident that it and surrealist shows like it tend to air late at night.

Tarell Alvin McCraney’s “David Makes Man” isn’t nestled way in the midnight line-up, but it is close enough to the veil of sleep for its languid dance between solid serial plot and visual flights into not-quite-reality to make sense. The new drama is a leap into experimental storytelling on the part of executive producers Oprah Winfrey and Michael B. Jordan, but it is decidedly a TV series

Each episode contains and depicts its distinct arcs with sure-footed certainty, although visuals are meant to seduce us and make us question if what we’re seeing is real. But McCraney, who co-wrote the Oscar-winning “Moonlight,” ensures there is a reason behind each dreamlike flourish.

Fourteen-year-old David, played with heartbreaking assuredness by Akili McDowell, is a boy straddling two very different lives. He’s highly gifted and inquisitive, and he sees enchantment everywhere, even in a lot overgrown by weeds or the ceiling of his small bedroom in the public housing apartment he shares with his little brother JG (Cayden Williams) and his mother Gloria (Alana Arenas), a recovering addict.

David attends a magnet school at which he’s one of a smattering of black students, and very likely the only one who doesn’t always know where his next meal is coming from or whether there will be one. This instability wears on David and makes him behave erratically and even lash out at confidantes like Seren (Nathaniel McIntyre), but owing to the grace and patience of his teachers, David — or DJ, as he’s known to his peers — can receive the care he needs.

The question is whether he’s willing to accept their kindness. His home life is far more tenuous, owing to his mother’s frequent absences and the community of drug-runners eager to pressure him and younger kids into service. Their leader Raynan (Ade Chike Torbert) vacillates between offering fraternal connection to David, who he calls Dai, and intimidating him by threatening to pull in the mischievous JG into their illegal business.

Watching over David, JG and others is Mx. Elijah (Travis Coles), one of many queer characters inhabiting this world who meet its unyielding brutishness with their own ferocity without abandoning their own devotion to kind. (Trace Lysette evokes this beautifully in an episode 2 cameo in a scene that makes her both savior and a menacing force; both sides are necessarily to survive this world.)

Consistently hovering nearby is David’s surrogate father figure Sky (Isaiah Johnson), the neighborhood dope king who, depending on the moment, acts either as David’s intellectual sensei or the devil on his shoulder.

Only a few people, like his caring teacher Dr. Woods-Trap (sensitively portrayed by Phylicia Rashad) and his counselor Dr. Bree (Ruben Santiago-Hudson) appreciate the stress of expectations bearing down on the boy.

But these stressors also explain why David inhabits other characters — the tough-shelled Dai, the jokester DJ — to cope with his hardscrabble life, or splits off into entirely different worlds we’re allowed to glimpse. A large part of this show’s mystery is finding out what is real and what, or who, lives in David’s mind.

The drama’s title announces this as a coming-of-age story, one very different from the usual versions where the protagonists don’t have to worry about starving or living in the dark because the electrical bill hasn’t been paid. McCraney’s gift as a storyteller is to get inside the pressures faced by young, specifically young black men — and explicitly this young black man — and enable the audience to intimately understand why David makes the choices that he does and, more to the point, that they are choices informed as much by momentary lapses as overall circumstances. Nothing is inevitable.

Tight shots on McDowell’s face give the viewer insight into David’s inner turmoil that others might not see. That also places the young actor in a position of towing most of the story’s emotional load, a feat he demonstrates he can handle over the three episodes I viewed.

This is not always an easy viewing experience, and the writers don’t hide the dangers lurking all around David. As the 10-episode story progresses, David strains from the tension between sinking into the cycle of easy money and high risk or channeling his high intelligence into fiery ambition. That pressure explodes the line between linear reality and daydream, or hallucination.

An effort to conceptualize a class project about his heritage diverts into a visual choreo-poem blending images of his African ancestors with memories of splashing through water on a hot day with other children. A wall might dissolve into sparkling waves, or during a feverish, parched nighttime walk, a public fountain is lit to resemble an enchanted desert oasis.

Again, these are not flourishes for their own sake but to take us inside the brain of a kid who is breaking apart at the seams. Showrunner Dee Harris-Lawrence leans heavily on the poetic imagery in the first episode, which moves more slowly than subsequent hours but establishes the tone of a drama most accurately described as lyrical.

For all of its artistic and surrealist vaults, “David Makes Man” isn’t impossible to elevator pitch. “It’s a coming-of-age story about a poor kid in Florida at a crossroads between crime and success through academics and higher learning.”

This AMC show, on the other hand, is a doozy. The first season introduces retired surfer, pool cleaner and slacker Dud (Wyatt Russell) and his similarly aimless sister Liz (Sonya Cassidy). But Dud happens upon a lodge for a weirdo community known as the Fraternal Order of the Lynx, where he befriends a plumber named Ernie (Brent Jennings). Absent anything else going on in his life, Lodge 49 becomes Dud’s reason for being, while Liz stumbles through her own maze of life adventures. That season ends with a shark attack, because why not.

The new season somehow gets weirder, opening with Ernie and Dud on a plane that’s going down with, as tends to happen, not enough parachutes. It’s a smart card for showrunner Peter Ocko and Gavin to play as they open a new string of episodes for a show that makes less sense to describe as a drama than a general state of being.

The lodge itself is at a crossroads, with resident alchemist Blaise (David Pasquesi) puzzling over a discovery unearthed within the lodge, journalist Connie (Linda Emond) flailing with writer’s block, and the lodge’s Sovereign Protector (aka resident cop) Scott (Eric Allan Kramer) cranky about tightening up the books. Ernie, meanwhile, is caught in a general malaise following a setback at work. Just for kicks, Bronson Pinchot pops in as Liz’s high-strung, abusive and totally inept new boss.

“Lodge 49” is a character showcase where every person has something off-kilter about them, and after a while the show makes it feel like you’re just on the verge of tripping. Somehow the actors and writers throw equal parts of mundane reality into a bowl of bizarre and whipped the combination of reality and fantasy into a cream thick enough to hold up. It feels right and not quite right at the same time.

But if you’ve ever experienced that liminal buzz between clarity and not being able to safely drive home, then you might get a sense of why “Lodge 49” has its fans. Dud and Liz’s journey launches out of grief — their father is dead, and the family business is sunk. The show feels rudderless because its heroes are suspended in loss.

Strange as the story sounds and looks, though, “Lodge 49” also is easy to laugh with and at, and the separate and combined adventures meander on a structured plan. We know somehow Ernie and Dud will have a plane to catch, and despite its indescribable nature I can assure you that you’ll be eager to tag along for the winding trip leading to that runway.