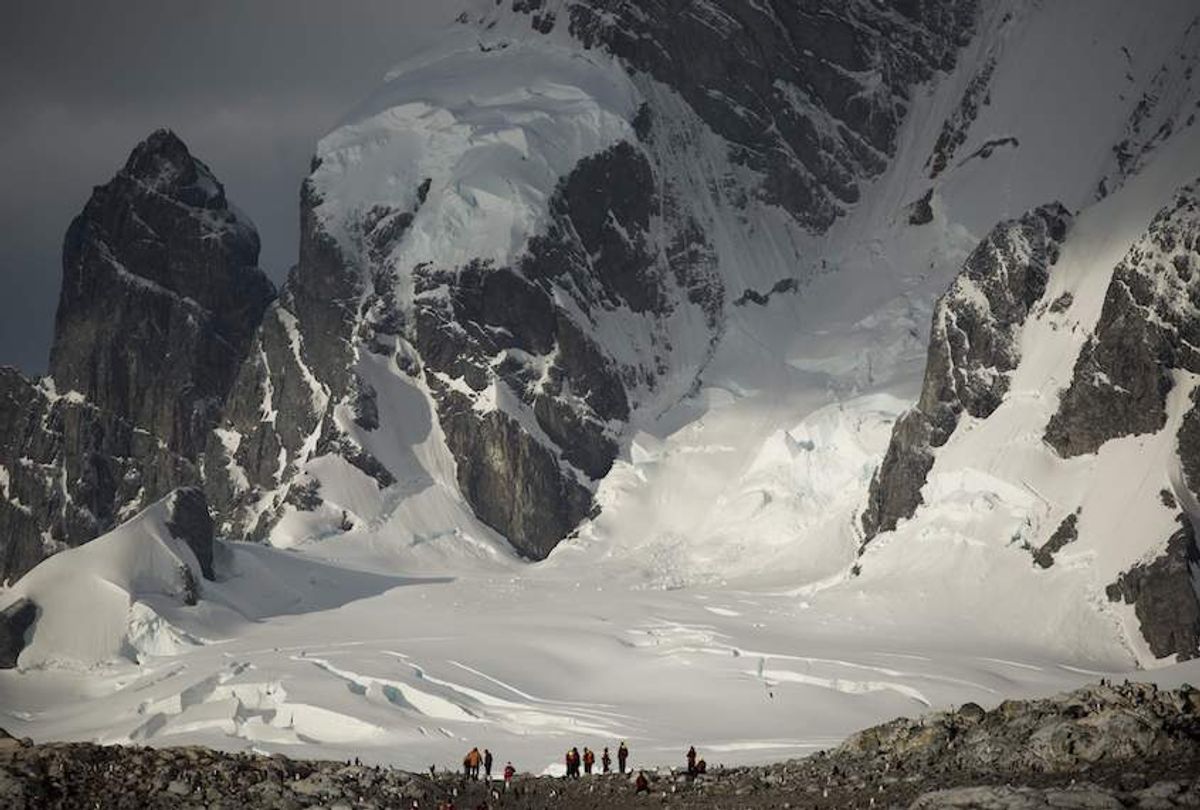 Tourists visit Cuverville Island, Antarctica, on March 04, 2016. The Antarctic tourism industry is generally considered to have begun in the late 1950s when Chile and Argentina took more than 500 fare-paying passengers to the South Shetland Islands aboard a naval transportation ship. The concept of 'expedition cruising,' coupled with education as a major theme, began when Lars-Eric Lindblad led the first traveler's expedition to Antarctica in 1966. Prior to this, human activity in Antarctica was limited to the early explorers, those seeking fortune in the exploitation of seals and whales, and more recently to scientific research and exploration. Antarctica's physical isolation, extreme climate and remarkable wilderness values are a great part of its attraction for tourism. AFP PHOTO/EITAN ABRAMOVICH / AFP / EITAN ABRAMOVICH (Photo credit should read EITAN ABRAMOVICH/AFP/Getty Images) (Eitan Abramovich/AFP/Getty Images)
--

Antarctica is the coldest, windiest, and driest continent on Earth — a place so raw in its geography and climate that early scientists and explorers were almost magnetically drawn to it in a quest for knowledge and glory. And thankfully, Antarctica’s geographic remoteness has protected its fragile ecosystems from the destructive and widespread development and human activity seen elsewhere on the planet that has caused an alarming 36% decline in global biodiversity since 1970.

However, a growing body of evidence suggests that Antarctica and the Southern Ocean face increasing threats in the near future. A rapidly warming climate is permitting an expansion of both commercial fisheries and tourist activity, all of which threaten this fragile environment - which is also an internationally shared and managed resource - that serves as a refuge for marine species and plays a keyrole in regulating global climate systems

In response to these threats, the 25 nations who are signatories to the Convention for the Conservation of Antarctic Marine Living Resources (CCAMLR) have been debating proposals to establish a network of marine protected areas (MPAs) that would balance commercial fishing activity with conservation. In 2009, CCAMLR successfully established the South Orkney Island Southern Shelf MPA, followed in 2016 by the Ross Sea Region MPA, which together (at least until the designation of the latter expires in 2052) protect 1.64 million km2, an area roughly the size of Iran.

Since then, however, the parties have struggledto agree on additional MPAs. At its core, the underlying dispute is whether fisheries should be constrained in favor of conservation objectives. On one side of the debate are countries including the United States, New Zealand, Australia, and France) that cite scientific evidence showing that MPAs can serve as a precautionary tool for reducing anthropogenic pressures on the environment. Used in combination with other fishery management techniques, such as seasonal closures and catch quotas, they provide some baseline protection for nature in case the more traditional approaches fail.

On the other side are countries such as China and Japan that do not support expanding the network of MPAs. They argue that fishing has not reached a level that might cause Antarctic fisheries to collapse. More fundamentally, these nations are opposed to permanently placing large ecosystems off limits to fishing interests without some documented threat, such as ecosystem collapse or species extinction, or evidence that MPAs are the solution to protecting against these outcomes.

On its surface, this second argument may seem convenient — one that we would expect diplomats to argue because they want access to marine resources. But my doctoral research, which focuses on how CCAMLR participants negotiate and implement management actions, suggests that this type of opposition to MPAs is an authentic and deeply held belief: a true cultural divide.

Based on interviews with participants in CCAMLR meetings, it is not just a position of convenience to argue that MPAs should only be established if there is a scientifically documented threat to a specific ecosystem. Rather, it emanates from a value system that believes the natural environment is to be used for human benefit — one that American, Australian, South American, and many European delegations may struggle to comprehend because the underlying beliefs are profoundly different. It may be the case that no amount of ‘reasoning’ will change this perspective

For the past three years, I have been investigating the process by which CCAMLR designates MPAs. Through interviews, surveys, and participatory mapping exercises, I have been documenting the evolution and negotiation of the RSRMPA, assessing the impact of external events and politics on CCAMLR negotiations, probing relationships between delegations, investigating individuals’ primary objectives and motivations, and examining the key factors that lead to successful agreements.

Together, these datasets paint a picture of an organization that is undergoing a significant period of institutional growth and learning. As CCAMLR confronts increased pressure on its natural resources, it is being forced to expand beyond its traditional focus on fishery management to implement a more comprehensive ecosystem-based management regime that includes MPAs. This means that CCAMLR is having to construct new scientific, legal, political, and institutional mechanisms needed to support spatial management decisions - for example, new MPA guidelines, research and management plans, and staff support at the secretariat in Australia.

Based on all of this work, I suggest two different paths forward. The first is recognizing that the current process in which proponents of MPAs develop proposals and present them to other delegations needs to be re-oriented to more clearly include a more utilitarian view of what should be ‘valued,’ ‘protected,’ and ‘conserved.’ In other words, parties of the CCAMLR must recognize that not all countries conceptualize or define biodiversity in the same way. This does not mean that opponents of MPAs do not see value in nature or are unwilling to set conservation targets and objectives to pursue as a collective group. Following this approach would entail securing ‘buy-in’ from countries that currently oppose MPAs by encouraging them to take greater ownership of the process and final proposals.

The second path would be to identify a specific “threat” to which each MPA proposal intends to remedy. To date, many delegations have voiced opposition to this because they fear it may set a precedent that undermines the ability of protected areas to serve as precautionary management measures. But clearly articulating the potential for overfishing, or modeling how climate change may affect specific regions, is an actionable step towards implementing broad-scale conservation actions. The very concept of an MPA is one of protection, and by definition, we protect vulnerable species or ecosystems from something that threatens their persistence or current state of being. In short, this is a step towards opponents and one that will provide more science and evidence in favor of establishing new protected areas.

In the meantime, refusing to creatively approach or circumvent these political barriers will only delay the establishment of Southern Ocean MPAs, which is an unacceptable outcome considering the scale of the threats facing Antarctic marine ecosystems, the speed with which global climate systems are changing, and the rate at which species are blinking out of existence.