"This monument is to acknowledge that we know what is happening and what needs to be done." 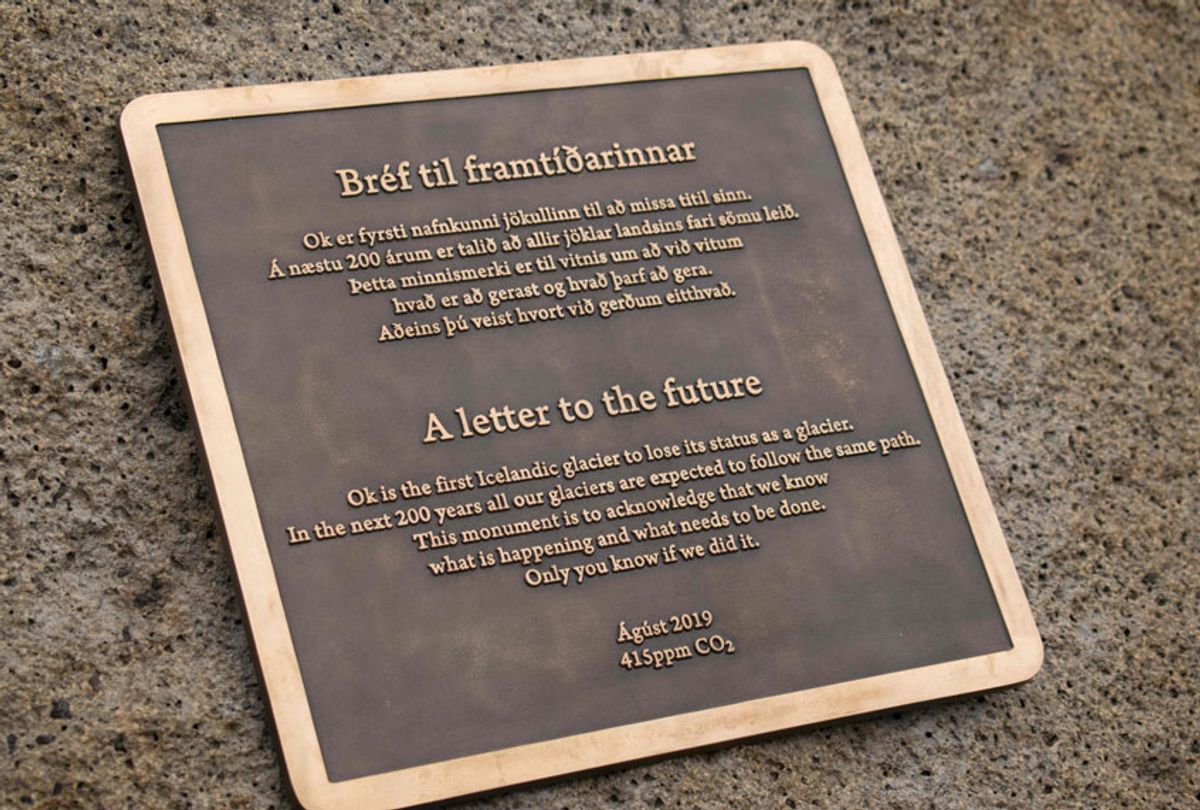 A monument is unveiled at site of Okjokull, Iceland's first glacier lost to climate change in the west of Iceland on August 18, 2019. (Getty/Jeremie Richard)
--

Gathering on a vast rocky landscape which until recent years was covered in a thick sheet of ice, Icelanders on Sunday took part in what was both a show of mourning and a call to action as they held a funeral for the country's first glacier to be lost to the climate crisis.

About 100 people marched to the top of what used to be the Okjokull glacier, commonly called Ok, led by the country's president and a number of climate researchers who have warned that the loss of the glacier is a sign of things to come if world governments fail to stop the planet's temperature from warming.

"The symbolic death of a glacier is a warning to us, and we need action," former Irish president Mary Robinson said at the event.

Speaking to Time, Jakobsdottir pointed out how the loss of glaciers may be destructive to the burgeoning renewable energy sector—which climate action groups are pushing governments to shift towards in order to cut carbon emissions to net zero in the coming decades.

"If the predictions of the scientists, if we see them happening, we will see other glaciers disappear in the next decades and centuries," said Jakobsdottir, "which is obviously a very big thing for our landscape, nature, ecosystems, but also our energy system, because we produce renewable energies from the glacial rivers."

As Common Dreams reported last month, the text on the plaque was written by Icelandic author Andri Snær Magnason.

"This monument is to acknowledge that we know what is happening and what needs to be done," reads the plaque, addressed to those who may come across it in future centuries. "Only you know if we did it."

The rock is now also labeled with the measurement "415 ppm CO2"—the level of carbon that was detected in the Earth's atmosphere in May.

At the time, one journalist at TechCrunch wrote that the record-breaking level of CO2 was "yet another indication of the unprecedented territory humanity is now charting as it blazes new trails toward environmental catastrophe."

Okjokull's funeral was held days after the U.S. weather and atmospheric monitoring agency NOAA reported that July 2019 was the hottest month on record, since it began recording global temperatures in 1880.

Scientists announced in 2014 that Okjokull would no longer be considered a glacier, after its size measured at less than half of one square mile. In 1890, the glacier covered more than six square miles.

Glacier experts say that at the current rate of global warming, Iceland could lose the more than 400 glaciers which cover over 10 percent of the country by 2200.

"I hope this ceremony will be an inspiration not only to us here in Iceland but also for the rest of the world," Jakobsdottir told AFP, "because what we are seeing here is just one face of the climate crisis."