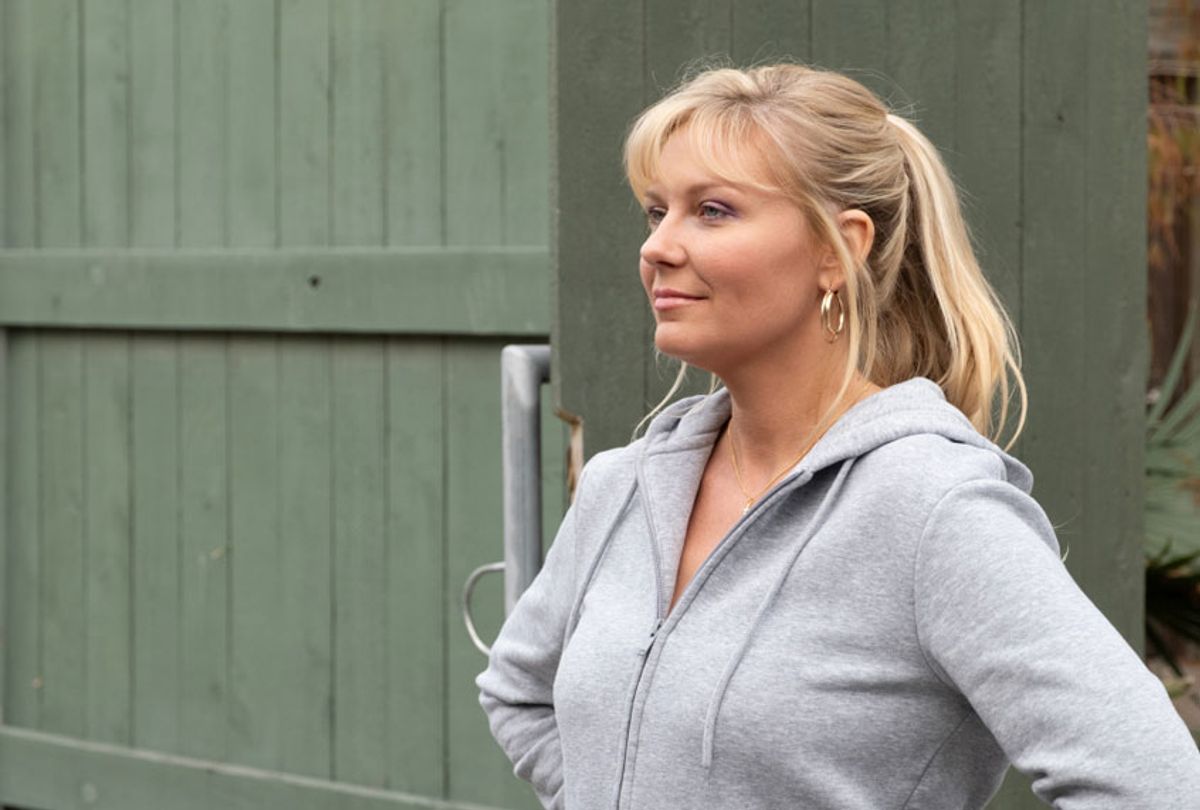 Everything that’s wrong with America today can be traced back to the false gospel of the American Dream of success, and the idea that anyone can be rich if they’re just willing to reach for it. Maybe that used to be truer than it is today, but it hasn’t been for some time now — decades in fact — and for a group of folks, it was always a lie.

If you doubt that, check out the first season of Kirsten Dunst’s “On Becoming a God in Central Florida,” Sunday at 10 p.m. on Showtime, and see if it doesn’t disabuse you of that unreality.  The show doesn’t walk us backward to where and how it all went wrong for everyone, but to the hard awakening of Dunst’s Krystal Stubbs, circa 1992.

Krystal’s 10-episode odyssey, steered by showrunner Esta Spalding, is a viciously funny smashing of the sandcastle that is American capitalism, a rigged system illustrated by an Amway-style pyramid scheme, the type of cultish, pseudo inspirational multilevel marketing plan that preys on the working poor and persuades them to hand over their money to manipulative charlatans promising one day they’ll be the ones moving up the ladder, they’ll be the ones collecting their cut.

This drama’s MLM goes by the jingoistic name of Founders American Merchandise, or FAM, purveyors of cheap everyday products available at any supermarket but, in the form sold by its contractors, supposedly better in some way.

To participants FAM is the answer to all their problems as long as everyone sticks to the almighty system constructed by Obie Garbeau II (Ted Levine), a mysterious millionaire who recruits “future founders” by sending them a series of inspiring tapes, sparking their enthusiasm through high-strung rallies and promising that all of his wealth can be theirs, if they just follow his orders.

To Krystal and her husband Travis (Alexander Skarsgård), FAM is their all-in ticket to next-level wealth. Travis is blazingly passionate in his belief, whereas Krystal isn’t so sure that her husband’s zealous enthusiasm is paying any noticeable dividends. Nevertheless, she hangs onto his dreams and promises of plenty: “Our hearts will be free and open and we will own a helicopter!” he tells her as they cling to their hungry baby in the middle of their shabby home.

Every day Krystal grinds it out at a minimum wage job at a water park while a deeply bored Travis sells insurance at his 9-to-5. Every night she cares for their infant while Travis heads out on the road to move FAM product and sign up more recruits to sell for him. A contractor is only as successful as the number of “downlines” he can get to feed him; his ability to achieve new levels of wealth is controlled by his “upline,” a figure that’s equal parts motivator and slave driver.

“Go Getters Go Get!” is a refrain that transforms in a heartbeat when a terrible reversal clarifies Krystal’s vision, allowing her to see FAM for exactly what it is.

What she does with that information tells the truth of the modern rags-to-riches fairy tale, a story fed by sharp hunger and a roiling fear of being destitute again.  As Krystal’s quest to rise gets underway she’s motivated by sheer desperation and the realization of how deep in the red her family is to FAM, but she's determined to get out by any means necessary.

Dunst, not surprisingly, demonstrates a firm grip on this tale and its loopy tone, channeling a beauty queen’s alluring sweetness and a vengeful mother’s tired rage with the same vigor with which creators Robert Funke and Matt Lutsky slather the story in a layer of bizarre not-quite-reality. The actress (an executive producer on the series alongside George Clooney and Grant Heslov) makes her character so naturally earnest and aflame with will that at times the line between the con artist and the savvy business woman is nonexistent.

The actor’s performance is worth paying attention to from the start, but the show finds its muscle the moment Krystal realizes that the only way to crawl out of the beast’s belly is to dive into the heart of it, then gut it and strut around in its skin.

This is also the moment Krystal realizes that means ensnaring the people closest to her, including her sweet and loyal friend Ernie (Mel Rodriguez, wonderful in this part) and his wife Bets (Beth Ditto).

At the same time, Krystal also must find a way around the sexism endemic to the FAM system; my earlier usage of the gendered pronouns, and possessives him and his, was not on accident. This is a profit web built around the sexist notion of men being providers and their wives being the loyal support system, a structure that isn’t welcoming to innovations and good ideas offered by a woman.

Nevertheless, she’s determined to rise on the backs of those who support her, and leap over anyone in her way. Once the empires tumbles, as it inevitably must, what then?

Indeed, “On Becoming a God in Central Florida” is not merely a story of a down-on-her-luck beauty queen clawing her way to the middle. It’s an effective allegory of unfettered capitalism as a rigged and failing game. And when it moves, it is darkly hilarious and grim in its honesty. Even when the momentum slows, performances by Rodriguez and Théodore Pellerin, Travis’ direct upline and an unswayable FAM zealot, grasp our attention until the story jumpstarts again.

As for the Florida-ness of it all, the writers don’t play its reputation for laughs but with a purpose.

Saturated colors dominate every frame, whether it be the dank sepia tones of the Florida night or the water park. But even that destination stands for more than just a stage for family fun. For all of its pastels and clear blue water, and the nostalgic yearning of an owner who dreams of returning the park to its glory days by attracting a whiter clientele, the place never looks anything other than shabby.

How can it not? The town where it and the rest of the action takes place is only described as “Orlando-adjacent.” The real magic kingdom isn’t in walking distance, but a person can drive there, if they can afford the gas for the trip and the price of admission once they arrive.

That’s the mixed compromise of American capitalism, and there’s a point at which Krystal is ready to reveal that truth. She seizes the spotlight and the attention of an audience of hoodwinked FAM faithful and stands ready to open her eyes.  But in a flash, it dawns on her that there’s more money to be made from being the person taking advantage of a room full of hypnotized followers than waking them up, which would be better for everyone but leave her pockets empty.

So she takes up the gospel of the go-getter and sets off on that path to open-hearted American freedom.