Gamergate is back, because it never went away: Zoë Quinn faces new round of attacks

Gamer world goes after Quinn, making clear that even in #MeToo era, many people believe myths about sexual abuse 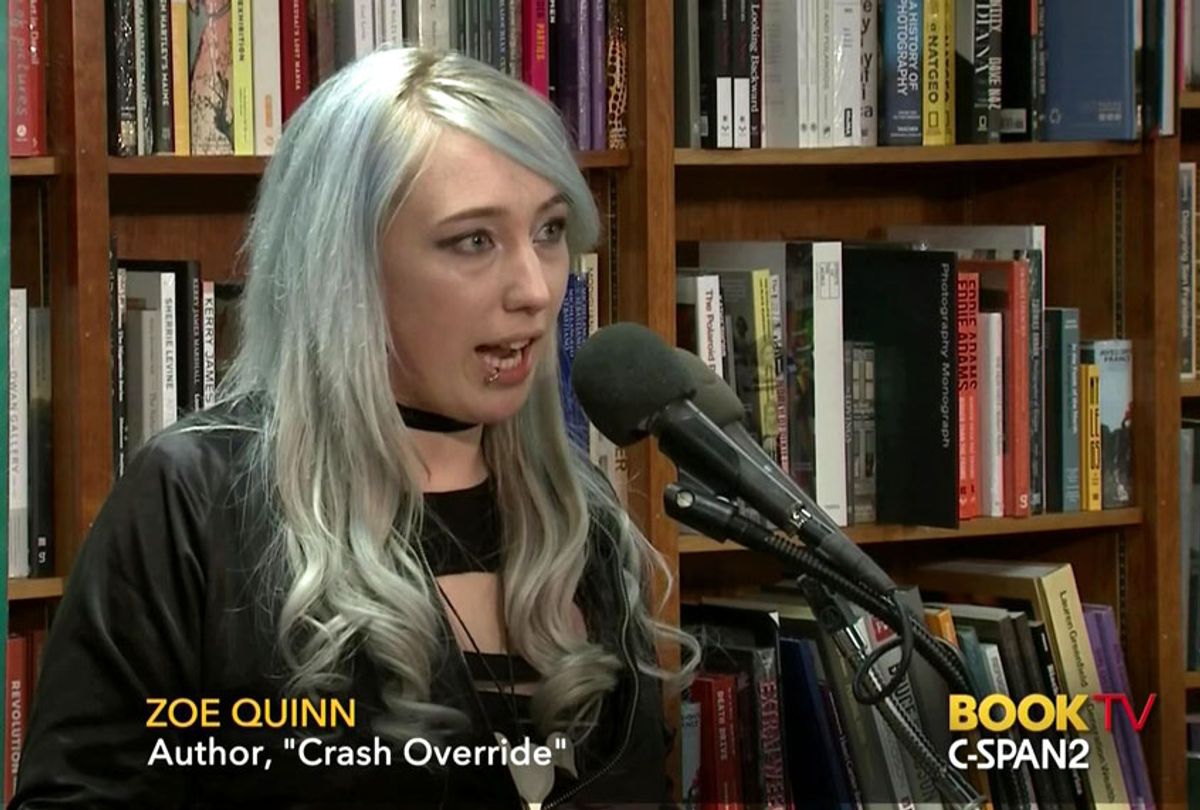 Five years ago, an angry young man who furious about being dumped by his game developer ex, wrote a blog post full of the kinds of sexualized accusations abusive men make when trying to ruin women's lives. This sort of thing is sadly common in our misogynist world, but this particular instance metastasized into what was soon known as "Gamergate": A massive online harassment campaign attacking not just this man's ex, but a large number of people who were targeted for advocating greater inclusion and diversity in gaming.

What happened next has been documented in my 2018 book, "Troll Nation," as well as earlier this month in a fifth-anniversary package at the New York Times: Gamergate continued to expand, growing beyond a gaming-centric scandal into a larger movement of white male resentment, which in turn helped lift Donald Trump into office.

But Gamergate going big-time didn't mean it went away. Five years on, the whole thing may be gearing up again, because the person who was the original target of an angry ex-boyfriend — game developer Zoë Quinn — has come out with another accusation, this time against Alec Holowka, a game developer who has worked on projects like "Night in the Woods" and "Aquaria."

On Tuesday morning, Quinn — who uses gender-neutral pronouns — tweeted out a harrowing story alleging that, during a short-lived relationship, Holowka basically trapped them in his house in Winnipeg, Canada, promising Quinn he'd buy them a ticket home but reneging when they actually arrived. During this time, Quinn alleges, Holowka subjected them to extensive abuse, both emotional and seemingly physical. ("He'd jam his fingers inside me and walk me around the house by them when I told him it hurt," Quinn wrote.) Quinn alleges that they were only able to return home after a roommate, using accrued frequent-flier miles, bought Quinn a ticket home.

Salon reached out to both Quinn and Holowka for comment and received no reply from either.

Immediately after Quinn published the tweets, the awakened forces of Gamergate went after Quinn, accusing them of lying. You see, Quinn has accused more than one man of abuse, including Eron Gjoni, the man who started all this with his slut-shaming blog post in 2014. Because of this, Gamergaters have decided that Quinn must be making all this up to gain attention, because it's preposterous to imagine that someone has been abused by two different people in the course of a lifetime.

"[A]pparently she’s been sexually assaulted by everyone under the sun so forgive me if I consider her credibility to be strained," read a typical response on Twitter.

"I'm sure she gets off gaslighting herself into thinking she really is some huge target for rapists," said a typical commenter on Kotaku in Action, a forum on Reddit that has kept the Gamergate spirit alive for the past 5 years.

To bolster claims that Quinn is a repeat false accuser, many Gamergaters floated the claim that Quinn once claimed to have stabbed someone. Despite much searching, Salon could find no evidence that Quinn has ever made such a claim in public, just many instances of Quinn-haters claiming that they heard the story from someone else.

It's easy to dismiss all this as the jabberings of misogynists — which it absolutely is — but the sad truth is that these particular misogynists are reflecting a more broadly-held notion, which is that a woman who makes multiple accusations is probably a liar. Call it the Highlander Theory of abuse: For any given victim, there can only be one man who has ever hurt them.

In reality, though, being abused multiple times by different perpetrators is quite common, arguably more common than not. Researchers have repeatedly demonstrated that once a person is victimized, the odds are high that it will happen to them multiple times.

There are a couple of reasons for this. For one thing, abusers tend to target vulnerable people, knowing they are easier to control. Quinn's account, in fact, alleges just such a situation, where they were financially and emotionally vulnerable and Holowka took advantage of that. People who are struggling with post-traumatic stress or other mental health issues resulting from abuse can become juicy targets for other abusers.

Another reason is simple bad luck. Abuse is common — really common. The National Domestic Violence Hotline estimates that there are 12 million victims of rape, domestic violence or stalking every single year. That's nearly twice the rate of police-reported car crashes in the United States. There are more than 6 million car accidents a year, it's no surprise that many people experience more than one in a lifetime. Intimate partner violence is even more common.

(It is worth noting that the man who started all this, Gjoni, was unmistakably abusive. There's simply no other way to describe writing a blog post designed to whip thousands of trolls into a harassment frenzy, as a way to punish someone for dumping you.)

Another insidious talking point ginned up by the Gamergaters was that Quinn must be doing this for, sigh, attention. Quinn had posted their accusations against Holowka in response to artist Nathalie Lawhead earlier accusing "Skyrim" composer Jeremy Soule of rape. According to the Gamergaters, this means Quinn is trying to steal Lawhead's thunder, because in the bizarro world of misogynists, coming out about abuse is what women do for fun.

It hardly bears noting that this is not the likely story of why Quinn came out now. Quinn writes that they read Lawhead's post and felt "ashamed" of having kept their own story to themselves for so long, and that "Nathalie's strength" gave Quinn the courage to come forward.

This is in line with what has been happening over the past couple of years with the #MeToo movement — and frankly, is implied in the name. Victims of abuse find strength in numbers, and when one person tells their story, that often inspires others to step forward. Nothing about this is unusual, and it certainly is not evidence that the allegations are false.

There's no way to adjudicate the truth of Quinn's allegations at this moment, but the Gamergate pile-on is a troubling reminder that we live in a time of maximized conflict over these gendered issues. On one hand, marginalized people are speaking out in greater numbers, demanding  not just equality but accountability for the various ways that men use the cover of privacy to enact oppression in the most personal of ways. On the other hand, there's an equally robust movement of people who will use low tactics like dishonesty and bad-faith arguments in order to reassert the male privilege to abuse without accountability.

We see this cycle on a national scale. Trump won in 2016 largely because communities like Gamergate saw him as a way to shut down the internet-aided rise of feminism, Black Lives Matter and other social justice movements. But Trump's win gave rise to the Women's March and, eventually, to the #MeToo movement, as more women, angry that a professed sexual predator was in the White House, felt the need to speak out. This latest dust-up over Quinn is yet another reminder that the forces of progressive and reactionary politics continue to be locked in a struggle, with no real way yet to guess at who will eventually prevail.