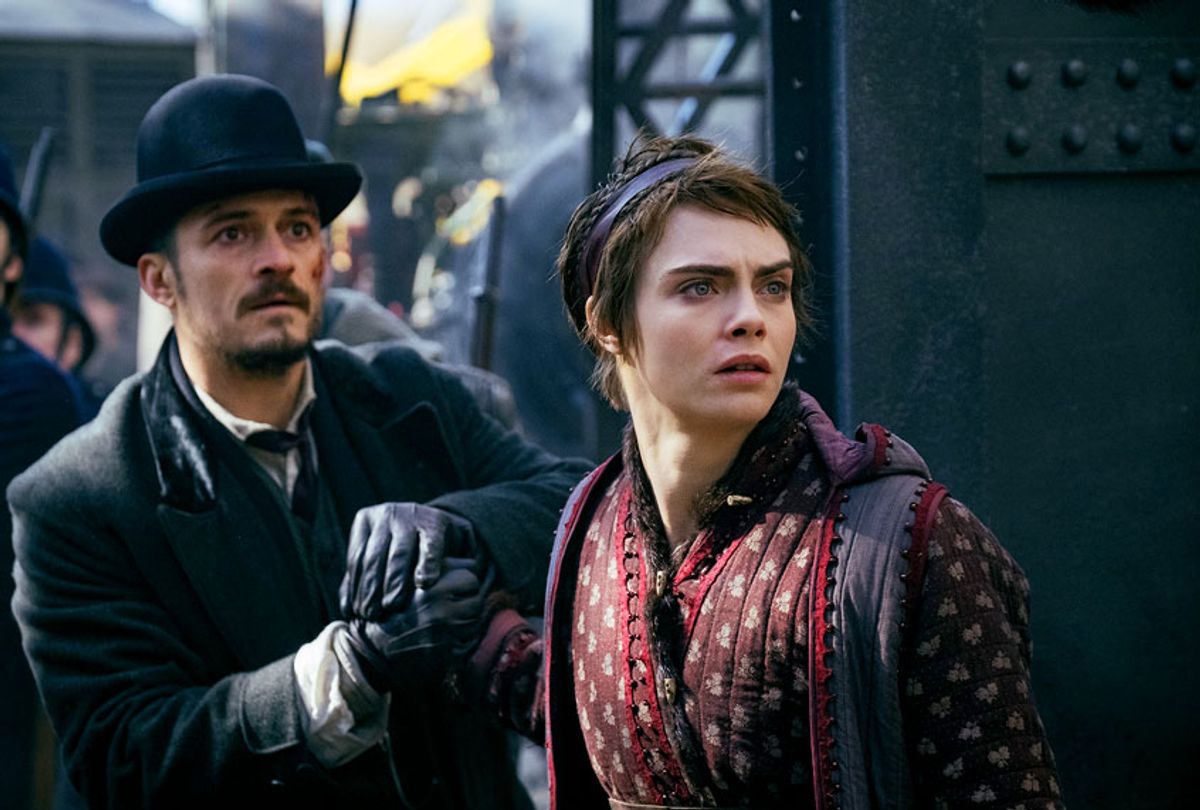 Various cultures around the world have their own versions of fairies, but a constant is their tendency to be capricious. Either they bestow blessings or curse a person with ill fortune. They trip people, swindle them and steal their babies. Humans have pinned a load of sins on the fae, these creatures that nobody can see but everybody swears are to blame for … something.

“Carnival Row” comes into the world destined to have certain expectations attached to it and will likely fail most of them. By its very nature of being a fantasy series tethered to a familiar-seeming reality, people will likely dismiss it as Amazon’s attempt to capture the “Game of Thrones” audience — which doesn’t seem to be its aim.  (Would a steampunk cosplayer enter a contest for knights at a renaissance faire? I mean, probably. But she wouldn't expect to win.)

It is, however, selling a number of plot accelerants within eight episodes. It’s a fable about refugees and immigrant discrimination written to reflect the crises and cruelties of our times. It’s a tale of clashing cultures and warring belief systems. But it’s also a Victorian-style murder mystery in which a Jack the Ripper-style killer is hunting unsuspecting fae.

Or wait, is there also a political intrigue plot surrounding an elected official? Why, yes. On top of that, there’s a subplot to be examined about how a nation recovers from a war it has lost, and how well or poorly it tends to tyrannized people left behind to die or escape in however limited ways that they can.

Mainly, though, it’s a love story wrapped around an identity quest. A very pretty one, starring Orlando “Legolas” Bloom, and a supermodel with wings, Cara Delevingne, two very pretty people. For some viewers the promise of seeing fairy-on-man sex scenes may be a sufficient lure—and sure enough, the eponymous street’s crown jewel is a brothel full of winged ladies.

That is not what the show is about, though. I mean, yes, it has that; but on the whole, the intent of “Carnival Row” is to sink us into a world that looks like Victorian London but isn’t.

The title refers to a seedy street in a place called The Burgue, where fairies, fauns and other mythical creatures eke out an existence in any way they can alongside humans, who have nothing but contempt for them.

The beings we know as mythical folk are refugees from their native Tirnanoc, a land conquered by an alliance of nation states called The Pact. The Burgue initially sides with Tirnanoc but pulls its forces out when the war is going sour, resulting in a surge of migrants desperate to escape genocide. In exchange for their lives, the fae are expected to refrain from flying or aspiring to be on equal social footing with humans.

And naturally, the government is well-invested in keeping its foot on the neck of the faerie folk. “They bring vices, wantonness, the scourge of elixir addiction, the worship of wanton gods,” booms one of the speakers at the Burguish parliament, earning him thunderous applause.

Even so, Bloom’s Rycroft Philostrate meets and falls in love Delevingne’s Vignette Stonemoss during the war, when he is a Burguish solider and she a freedom fighter. Years later, he’s a detective in the Burgue when she turns up as a refugee and is angered to discover the man she believed to be dead is very much alive, and working for the same cops that blackmail and threaten her kind.

But they’re not as much of danger as a murderer stalking the people of Carnival Row, for reasons that are not initially clear.

“Carnival Row” is a visual splendor, make no mistake about that. Even when the setting is at its dingiest, its directors Thor Freudenthal and Jon Amiel draw the eye to the beauty in the muck, making the loveliest scenes glow all the richer. Of course the real test is how well the CGI sells the fairy flights and mid-air skirmishes, and it passes on both counts. The fae wings, when unfurled, are enviable.

The challenge “Carnival Row” faces to find purchase with viewers is somewhat akin to the one I suspect waits in store for Netflix’s “The Dark Crystal: Age of Resistance,” which also comes out on Friday. Each, in its own very specific way, gauges the audience’s presumed affection for the fantasy genre as fiercely as it presses our appetite to absorb politics in fantastical escapism.

Fantasy and fairy tales were never entirely intended to remove us from the world’s ills, and indeed, the most resilient myths speak directly to the multitude of forms human malice takes.

But where “Age of Resistance” may benefit from the halo effect of Jim Henson’s legacy and that of the film that inspires it, Amazon’s drama pushes into somewhat underexplored genre territory. Dragons, elves (even the adjacent variety called Gelfling) and knights are a simple sell. Fairies and fauns are still somewhat specific in their appeal, levitating orgasms notwithstanding. (Oh, see, now you want to watch, hmm?)

Another major difference between these two very disparate genre titles is in clarity of mission.

Travis Beacham, who conceptualized the story that became “Pacific Rim” and began constructing the world of “Carnival Row” nearly two decades ago, originally intended the piece to be a parable about racism. The world being what it is and doing what it does over the intervening 17 years, he and co-creator René Echevarria, along with fellow executive producer and showrunner Mark Guggenheim, expanded the tale to speak to current events and encompass classic hooks of popular entertainment. Hence the stew of plotting.

The divided world of the Burgue is harrowing enough to navigate with a killer on the prowl. Then add in the drama’s array of subplots only loosely connecting most parties during the first four episodes of season one, and at times, keeping all the stories in order feels akin to sorting through entrails — though much lovelier, of course, and peddled by extraordinary actors.

On the political side of the story quilt, Jared Harris and Indira Varma pair nicely as the paranoid Chancellor of the Burgue Absalom Breakspear and his manipulative wife Piety. David Gyasi turns in a wonderful performance as a faun named Agreus, who defies social order and purchases a nice house in a nice community and as one might imagine, the neighbors are not thrilled.

And though the chemistry between Rycroft and Vignette is fine (although their starcrossed romance ignites almost out of nowhere) the scenes Delevingne shares with Karla Crome, playing Vignette’s best friend Tourmaline, are about as enticing. If her love affair with Rycroft doesn’t work out, their partnership as friends may be worth watching.

Anyone who knows fairy tales will be prepared to absorb the politics and societal commentary driving these eight episodes; that’s not the issue. What keeps the drama from flying completely true, in spite of all its beauty, is that it falls short of its obligation to utterly enthrall the audience with its stories as well as its glamour. Fortunately Amazon picked up a second season of “Carnival Row” already, granting its creators a pass to comb out the tangles, or maybe even create more fascinating ones.