The birth certificate in your mouth 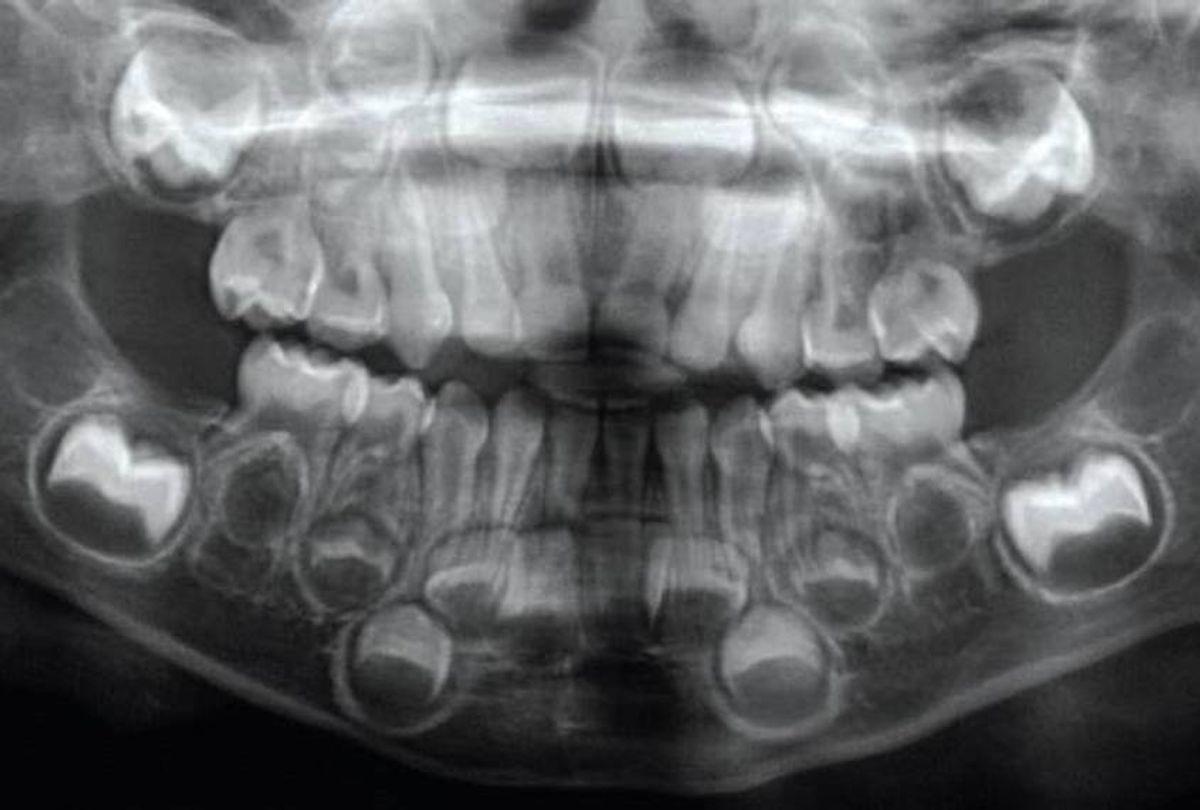 The French paleontologist George Cuvier famously remarked, “Show me your teeth and I will tell you who you are.” As the forefather of comparative anatomy, Cuvier helped to establish how the shape of a structure relates to its function. The pointed canines of lions are useful for piercing animal prey, for example, while the flat molar teeth found in specialized seed-eating monkeys efficiently crush and grind hard objects. Paleontologists use the anatomy and behavior of modern animals to infer the diets of extinct species, thus “telling” what something is from their teeth alone.

Cuvier also pointed to a deeper truth about teeth, albeit unintentionally, since the details of an individual’s early life are registered in perpetuity. Teeth are unlike any other body part, recording physiological rhythms as often as every 8–12 hours, and as infrequently as every season or year. Kids today learn about annual tree rings in elementary school, yet many dentists and oral health specialists are surprisingly unaware that the focus of their livelihoods is a sophisticated time machine — one that, amazingly, goes all the way back to before birth. 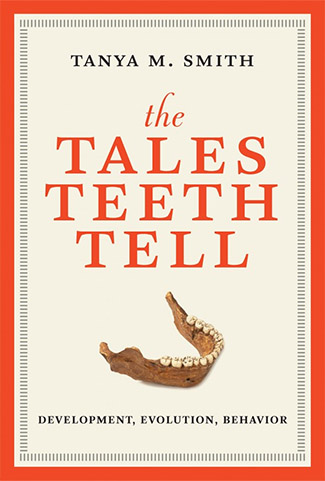 Baby teeth begin calcifying when we are still in the uterus, as does our first permanent molar. These teeth preserve lines that indicate the temporary position of enamel- and dentine-forming cells during birth. Scientists discovered these neonatal lines by examining hundreds of baby teeth from human children, finding dark, accentuated lines in a similar position in most teeth. Dental researcher Isaac Schour was the first to suggest that this microscopic disruption is caused by the physiological transition of birth. Others have since counted subsequent daily growth lines in young individuals, finding close agreement with their age and confirming that this line is indeed formed at birth. Under the microscope one can often see that enamel prisms deviate slightly from their straight course as they pass through the neonatal line. The adjacent enamel also shows a change in mineralization, producing a darkly contrasted line. Some hypothesize that these lines appear in infants’ teeth because of changing calcium levels during or just after birth.

This is undoubtedly a stressful time for infants, who often lose weight for the first week or so after they are born. (My colleagues and I have foundsimilar disruptions during periods of weight loss in young monkeys long after birth, hinting at a causal connection among different types of accentuated lines in teeth.) Enamel secretion may even slow down immediately after birth, which researchers can detect from the compressed spacing of daily growth lines.

The neonatal line is quite broad in most individuals, indicating a disruption in tooth formation that lasts longer than one day. Scientists have wondered whether a difficult birth process leads to darker or broader neonatal lines. Current evidence appears to be mixed. One comparison of 147 infants born by three different processes — naturally, via Cesarean section, or with an intervention like forceps or vacuum — showed that the C-section babies’ teeth had the thinnest birth lines, followed by those born naturally. Infants born after an operative intervention due to complications had the thickest neonatal lines. However, another study of 100 children did not find that these lines varied among children born different ways. My hunch is that the discrepancies between these two studies may relate to the difficulty of preparing sections for microscopic analysis, which often involves a combination of skill and luck.

It turns out that nonhuman primate infants also have neonatal lines in their teeth, as do other mammals. They appear in the first molars of free-living wild primates, as well as in captive ones, and many show strongly marked birth lines. This is interesting because nonhuman primates appear to have a more mild labor and delivery process than humans. Their babies pass through the birth canal with much less difficulty than large-brained human babies. When one considers these various types of evidence, it doesn’t seem possible to determine how a modern human baby was born solely from the appearance of the neonatal line. 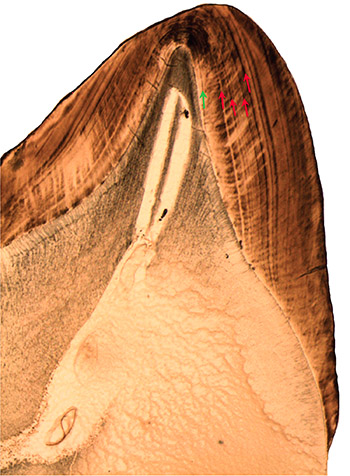 However, this line does allow scientists to determine whether individuals survived the birth process. One example is an investigation of ritualized human sacrifice in Carthage, an ancient Phoenician city in Northern Africa. The teeth of 50 young infants buried in ceramic urns were assessed via microscopic study to determine if they were stillborn, or if they survived long enough to record growth after the neonatal line. Apparently half of the individuals did not preserve this marker, which means that they were unlikely to have lived long enough to be sacrificed. The research team concluded that, while occasional practices of this grisly ritual may have influenced historical reports, the prevalence of very young children in ancient Mediterranean funerary contexts is more likely due to stillbirths or infectious diseases during early infancy.

Another remarkable use of the neonatal line is the determination of whether an infant was born prematurely. In one study, world-renowned histologist Christopher Dean teamed up with his former student Wendy Birch to analyze the baby teeth of a colleague’s twins. Dean and Birch sectioned the teeth, located the neonatal line of each twin, and counted the number of days these teeth had been forming prior to birth. They came up with counts of 75 and 74 days for the two twins, which was 65–66 days shorter than the average prenatal formation time for premolars. They inferred that the twins were born approximately two months prematurely. After completing their study, they learned from medical records that the twins were born 58 days before their predicted due date — confirming their conclusion. This approach could become a powerful forensic tool for investigations of unidentified remains from young individuals.

Incredibly, babies are not the only ones who form a line during birth — young mothers can too. We know this because pioneering Japanese researchers developed a crucial time-marking system in the late 1930s, employing this to examine the teeth of young female rabbits that had given birth. Their study showed a broad light-colored area in the dentine a few days prior to delivery that switched to a dark band immediately afterward. They referred to this structure as a parturition line in keeping with the scientific term for giving birth, and hypothesized that it is caused by changes in the carbon dioxide and acidity of blood. Subsequent experimenters have confirmed that a parturition line may be seen in other mammals, including dolphins and ground squirrels.

The exciting possibility of finding a similar line in human teeth motivated Christopher Dean to team up with Fadil Elamin, a Sudanese dentist. They examined the teeth of Sudanese women who had given birth while they were teenagers, prior to the completion of their third molars around 20 years of age. After this point, teeth stop adding daily lines, thus the importance of choosing women who became mothers at young ages. Dean and Elamin found several broad lines in the third molars of four women. These resembled the parturition lines found in other mammals, and nearly half of the lines were believed to match with birth events. The results show potential, yet the study also underscores how complicated it is to be definitive about their identification in humans. While first molars have neonatal lines in a consistent location, allowing assessments of age, third molars begin forming several years after birth, making it more difficult to tie their formation to a precise age. Moreover, memory tests prove that most people are not able to recall past events accurately. It isn’t clear how well the Sudanese mothers estimated the timing of their deliveries years later, since they couldn’t be verified with hospital records. And there is a final complication — it’s nearly impossible to rule out alternative causes for similar parallel lines that form after the neonatal line.

Being able to find dental birth certificates and subsequent physiological disruptions etched into teeth has opened up new possibilities for understanding the development of our ancestors and close evolutionary relatives. Neonatal lines allow precise age estimates for young individuals in the fossil record though counts of the microscopic daily growth between birth and death, when tooth formation ceases prematurely. This has helped to confirm that earlier hominins grew and erupted their teeth more quickly than humans living today — likely maturing earlier than modern children. The presence of postnatal accentuated lines has also allowed us to explore the first few years of Neanderthal childhoods on a weekly basis — showing greater disruptions during wintertime, including a likely illness during the height of winter. These are just a few of many tales that we can tease out of those who are brave enough to bare their teeth.

Tanya M. Smith is a Professor in the Australian Research Centre for Human Evolution at Griffith University in Brisbane, Australia, and the author of "The Tales Teeth Tell," from which this article is adapted.