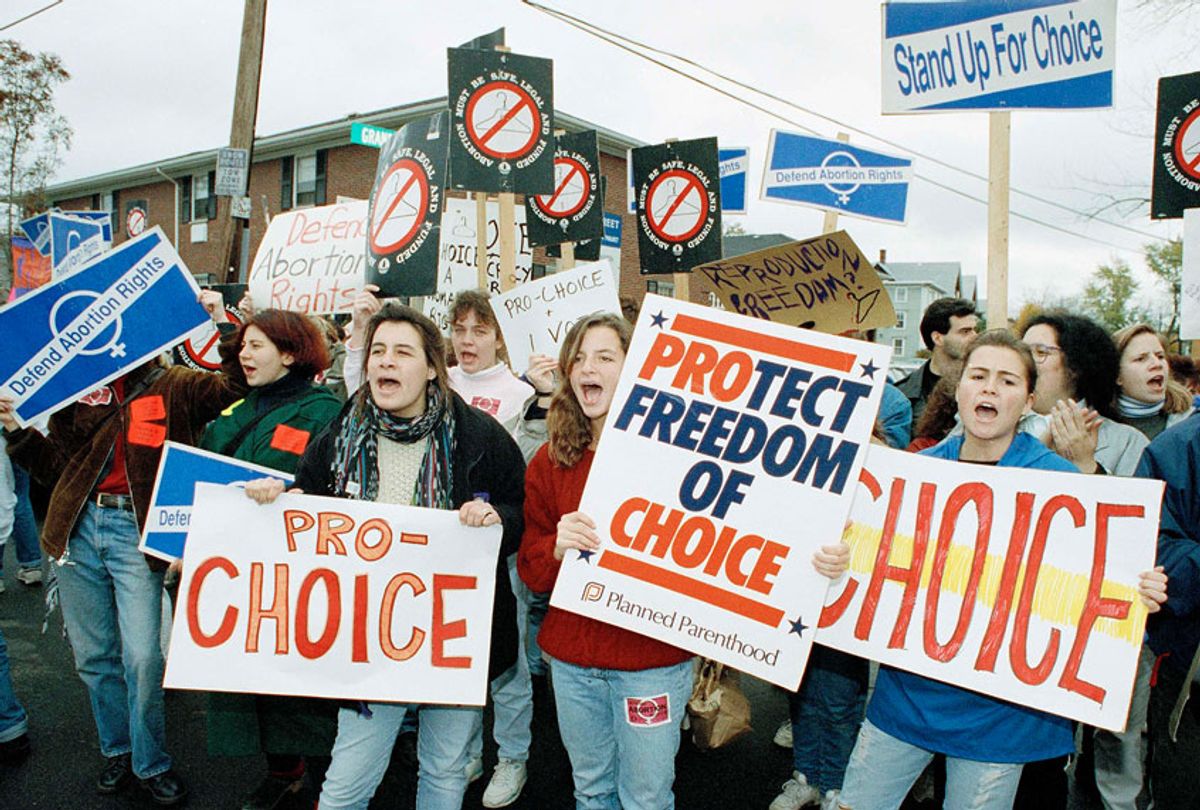 It used to be a joke, kind of.

People would ask me why I’d chosen to set my young adult novel "Rebel Girls" in the 1990s, a notoriously difficult era to sell to teen readers. And I would say, “Because I don’t want to write a dystopian novel.”

Back when I started saying that, long before I got an agent or a book deal, dystopian novels were at the peak of their popularity and Obama was president. It was an easy deflection, a way of saying I didn’t want to write to current trends (not that I thought that recent political history would be the next big trend in YA). And even though I loved books like Suzanne Collins’s "The Hunger Games" and Lauren Oliver’s "Delirium" trilogy and could see how they served as allegories for issues we face in the world—such as inequality—I wanted to write something more specifically rooted in our everyday reality.

And, at the same time, I wasn’t entirely joking about that dystopia. I’ve been a patient escort at an abortion clinic in New York City for about seven years and involved with reproductive rights advocacy for even longer. I knew more than most people that a lot of states—including Louisiana, the one where I grew up, and where my novel is set—were working to decrease access to abortion through TRAP laws. In 2016, the Guttmacher Institute, which tracks abortion policies, noted that the years between 2010 and 2015 featured more attempts to restrict abortion at the state level than any other five-year period since Roe v. Wade. But at the time, this chipping away of abortion rights felt like an invisible problem (which is part of the insidiousness of TRAP laws). People often don’t understand about the loss of access until it’s too late, and it’s easy to miss the decline in numbers of clinics when abortion is theoretically still legal.

But neither making a cynical joke about a then-popular YA genre nor a genuine fear that we might be heading toward a dystopia constitutes a strong argument in favor of a setting that would make agents and editors dismiss my book as a nostalgia project. Instead, I was driven by a genuine need for a time and place that illustrated the stakes around abortion debates. Not around the individual choice to have an abortion, but about how we talk about abortion within public discourse.

This wouldn’t have been easy with TRAP laws, because most people didn’t know what they were, let alone have a vocabulary around them. So I looked to the early 1990s, when the debate about abortion was highly visible, through large-scale protests and laws that directly threatened access, and my hometown of Baton Rouge, Louisiana, which was the site of one of Operation Rescue’s large-scale summer protests.

"Rebel Girls" is set in the fall of 1992, in the aftermath of those protests. The anti-abortion organization chose the city after the Louisiana legislature passed one of the most restrictive anti-abortion laws in the nation, overriding the governor’s veto. In the novel, a pro-choice girl at an overwhelmingly conservative Catholic high school must protect her pro-life younger sister from a vicious rumor that she’d had an abortion during the protests over the summer. The novel is about bullying, abortion stigma, and empathy, and the tricky realities of helping people whose beliefs might not align with yours.

In many ways, 1992 marked a turning point in the fight for abortion rights, both in terms of protests and in terms the types of laws that targeted abortion. Operation Rescue’s protests in Baton Rouge were not that successful, compared to the organization’s protests in Wichita, Kansas, the year before and earlier that year in Buffalo, New York. The organizers expected hundreds of arrests, but thanks to a hastily built fence that kept anti-abortion protesters and clinic defenders apart, there were only 58 arrests—though there was still plenty of verbal harassment toward patients. After that summer, Operation Rescue changed its tactics from focusing on large demonstrations one city to creating smaller, local protests across the country.

But something else changed that summer, as well. On June 29, a little over a week before the protests began outside the Delta Women’s Clinic in Baton Rouge, the Supreme Court decided what would be a landmark case for abortion law: Planned Parenthood v Casey. It was an unusual decision, in that it made both sides somewhat unhappy. It reaffirmed the right to an abortion in Roe v. Wade, but it changed the way that state-level abortion restrictions were evaluated and introduced the “undue burden” standard. What exactly constituted an “undue burden,” though, was left open.

Anti-abortion legislators shifted their strategy away from efforts like Louisiana’s 1991 law—which would have eliminated all abortions, except in the case of rape and incest, both of which had to be reported within seven days to the police—that were likely to be struck down by the Supreme Court’s reaffirmation of Roe v. Wade. Instead, they focused on the “undue burden” portion of the ruling. Essentially, the Planned Parenthood v. Casey decision opened the door to whittle down abortion access through TRAP laws. Over the next decade and a half, numerous states enacted these laws, requiring various hurdles for abortion providers. These ranged from requiring that doctors performing abortions have admitting privileges at local hospitals to requiring abortion clinics maintain the standards of a surgical center.

Of course, choosing a different decade for more contentious setting to heighten the stakes for my novel made sense when I was writing it. Back then, the setting felt different enough to be truly the past. And when in 2016 the Supreme Court decided in Whole Woman’s Health v. Hellerstedt that the Texas TRAP restrictions were an undue burden, it seemed like issue was settled.

And then President Trump was elected.

For the first time in years, Roe v. Wade is under direct threat, instead of the slow-drip of TRAP laws. During the 2016 presidential election, Donald Trump suggested—and quickly withdrew—that women should be punished if they sought an abortion. This was counter to the standard anti-abortion rhetoric, which viewed women as “second victims” of abortions. Even though he quickly walked back the statement, it had an effect on the kinds of laws that were passed at the state level. Since the beginning of 2019, nine states have passed laws restricting abortion, including one in Georgia that punishes women who have illegal abortions.

One of those states is Louisiana. Unlike the 1991 law that was too strict for the self-identified “pro-life” Republican governor Buddy Roemer to sign, the current Louisiana law does not make exceptions for rape or incest. It was signed into law by the Democratic governor, John Bel Edwards.

These laws will undoubtedly face challenges. But with President Trump appointing a record number of appeals court judges and Brett Kavanaugh’s appointment to the Supreme Court, the future is less certain.

This assault on reproductive rights is real, dangerous, and happening quickly—and it definitely has dystopian overtones. It leaves me wondering how to maintain a sense of empathy, instead of despair, in a nation that seems to be enacting cruelty all around—and not just around abortion. The Muslim ban; the treatment of immigrants throughout the country, but especially along the border with Mexico; discrimination against transgender people; ongoing racism. The list goes on.

The goal of the young adult writer is to create a space where young readers learn empathy, not just to see themselves reflected but to look through windows into other worlds. But lately I’ve realized something. I want that for adults, too. I want empathy to enter the political conversation of the present. I’m sure that to some people, my talk about empathy and abortion seems very one-sided, that I’m not empathetic for “the unborn.” But it’s hard for me to reconcile concern for the “unborn” with the lack of support that women often receive if they do carry an unplanned pregnancy to term.

I want a space we have to talk about abortion and reproductive health care, where it’s not a dystopian vision where women’s rights keep getting eroded, where people seeking medical care aren’t stigmatized, where “choice” is a real option.

I didn’t want to write a dystopian novel, and I don’t want to live in one, either.

Elizabeth Keenan is the author of "Rebel Girls," forthcoming from Inkyard Press/HarperCollins.