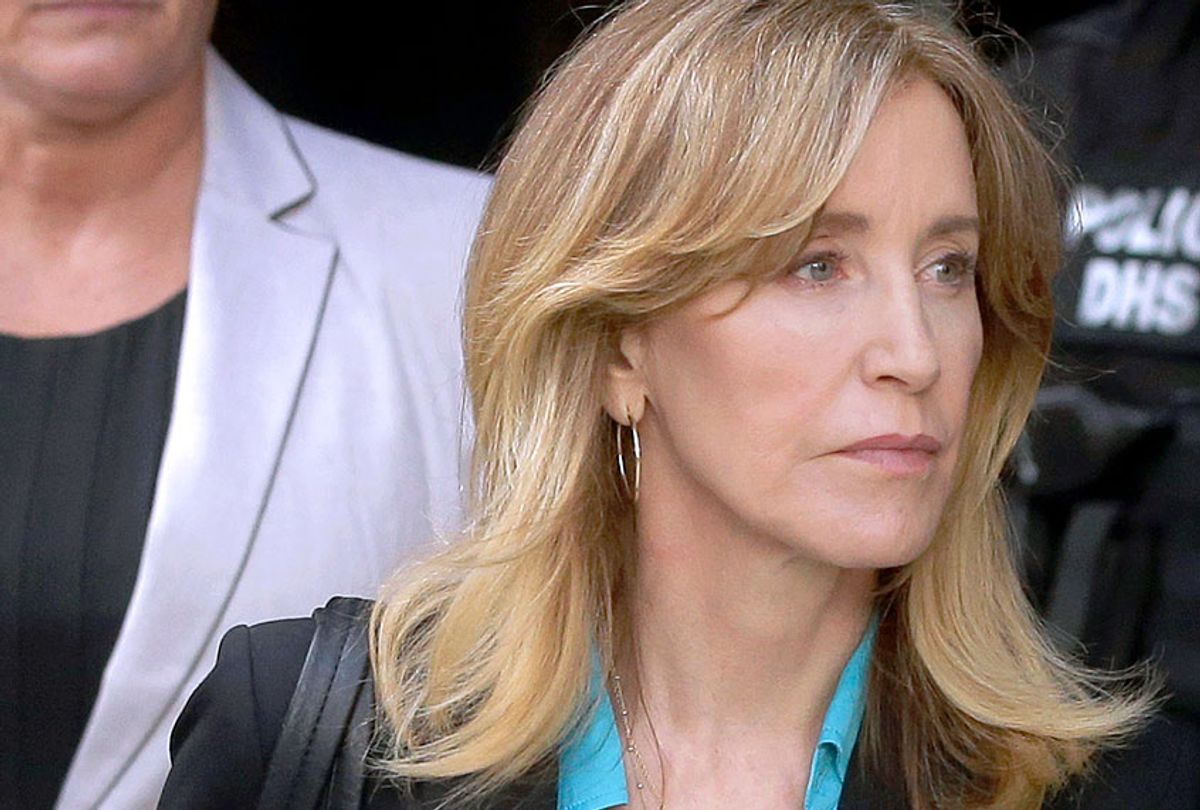 UPDATE: Huffman was sentenced to 14 days in prison, plus one year supervised release, 250 hours community service and a $30,000 fine.

Most people with basic common sense understand the race problem that exists in this country. They know that many black people don’t get a fair shake. But frequently I encounter honestly confused white people at book events who have little to no proximity to black people, other than authors swinging through their town to promote their race books — the single black dude who luckily made it out because of some rare opportunity, which leads them to believe everyone can, even those without the same opportunities — and who simply think that racism ended with slavery, and that systemic or structural racism doesn’t exist. So here’s a clear example for those who don’t get it.

Most parents, regardless of ethnicity, economic background or social class, want their kids to receive a great education. We know that education opens doors, creates opportunities and is a key in leading a happy, meaningful life. Back in 2011 Tanya McDowell was homeless and living in her van. She wanted her five-year-old son to receive a quality education, so she enrolled him in Brookside Elementary of the Norwalk School District. He was later kicked out due to a residency issue, so he transferred to Bridgeport schools.

Police investigated McDowell and charged her with fraud. A year later she pleaded guilty to first-degree larceny and conspiracy to commit first-degree larceny; for these offenses, she received a five-year sentence. Before McDowell started serving it out, she was charged with selling narcotics to an undercover police officer, an offense that killed her community support. McDowell was ultimately given 12 years, to be suspended after she served five, and followed by five years of probation; the narcotic sentence to run concurrently with a five-year sentence she had already received in the Norwalk school case. All of this story, from the over-policing of this mother to the severity of her sentence, along with everything she did, was obviously driven by poverty, which remains synonymous with "guilty" in our lopsided system of so-called justice.

On the other hand, you have a person like Felicity Huffman, who enjoys the many privileges that come with being a rich "Desperate Housewives" star, in addition to the other shows and films she's acted in, and having the resources to expose her daughter to educational advantages that McDowell may not have even been able to dream of: tutoring, unlimited books, technology, a safe learning environment, and even an SAT specialist who helps struggling kids obtain high scores. I’m not sure how Huffman educated her daughter, but we know the actress was arrested in March on mail fraud and conspiracy charges as an outcome of the FBI's Operation Varsity Blues investigation, and pleaded guilty to mail fraud, after paying $15,000 to allegedly rig her daughter's SAT scores.

Huffman is scheduled to be sentenced in Boston on Friday — for one month in prison, if the federal prosecutors' recommendation is followed. Huffman's attorneys have instead asked for a year’s probation, plus community service and a $20,000 fine.

[UPDATE: Huffman was sentenced to 14 days in prison on Friday, plus one year supervised release, 250 hours community service and a $30,000 fine.]

How cool would it be if McDowell could have simply paid a fine of $20,000 instead of facing five years? But homeless people don’t normally have $20,000 lying around to make an embarrassing problem go away. McDowell’s tax for being black and poor caused her to lose five years of her young son's hugs and kisses, and his laughs, his development, his education and the very experiences that make families. If Huffman is unlucky, she will do one to four months.

I don’t think Huffman will receive any time at all. This why black people make up around 13% of the total population in America, but represent over half of incarcerated people in state and federal prison.

That’s why I can do anything but laugh when I hear foolishness like when Fox News host Tucker Carlson said “the whole thing is a lie” in response to the power of systemic racism, and the many active white nationalist conspiracy theories that exist. “It’s actually not a real problem in America.”

Both McDowell and Huffman attempted to use the tools they had at their disposal in order to secure better educational opportunities for their respective children. And yet when examining the disparity in how those crimes are punished, it becomes clear that while on paper they are similar, in the eyes of the court they are apparently deserving of very different punishments.

The racism is real and clear to see; all deniers like Carlson have to do is simply open their eyes.