9/11 first responders are dying because officials lied about air quality. Trump is just a continuation of a problem 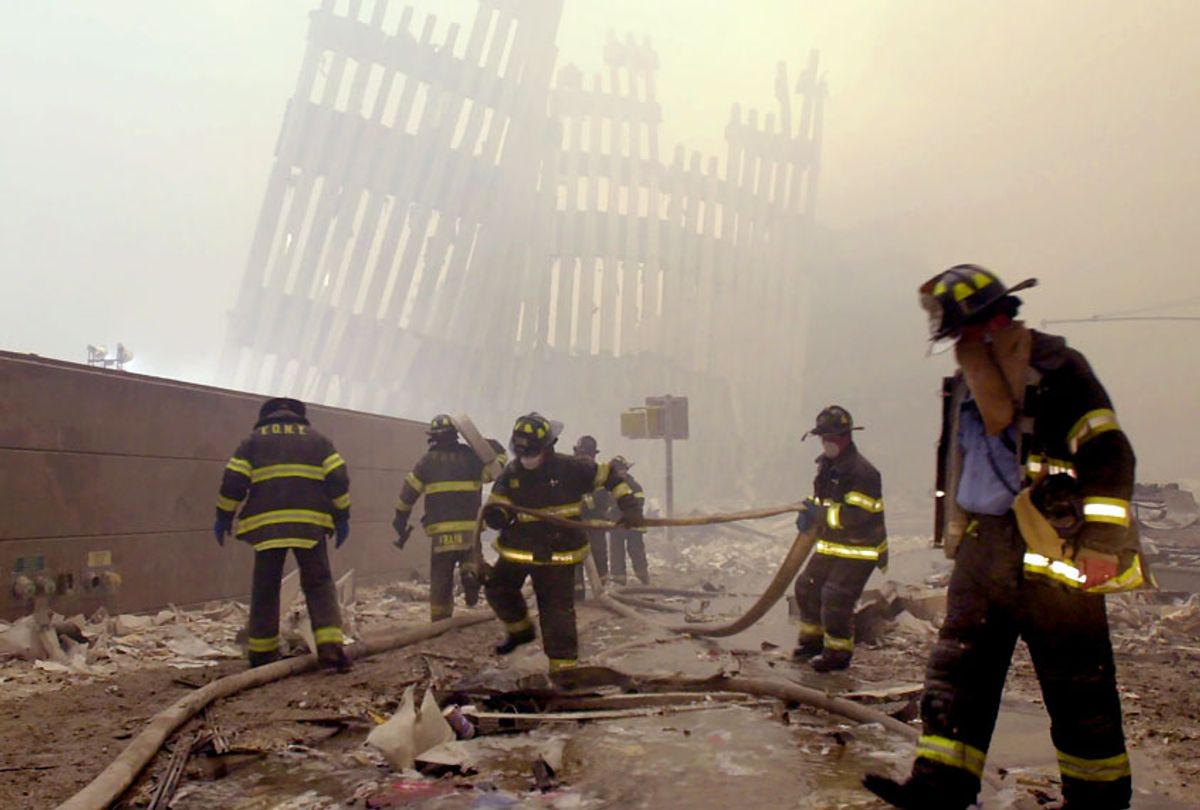 With the skeleton of the World Trade Center twin towers in the background, New York City firefighters work amid debris on Cortlandt St. after the terrorist attacks of Tuesday, Sept. 11, 2001. (AP Photo/Mark Lennihan)
--

Liberals have a tendency to paint Trump as a unique prevaricator, in a class of his own as a habitual and malicious liar. And yet, on this 18th anniversary of 9/11, in the midst of Trump’s misrule, it is critical that we keep track of the body count generated by the bold-faced lies issued to us by government officials — long before the prevaricator-in-chief came to power.

The specter of needless civilian deaths, the expansion of the military-industrial complex, and the decay of our democracy long predate Trump. But 9/11 represented a particular political turning point for us. And in the years since the attack, assorted political lies have permitted the marshaling of the entire economy, while transforming Congress into a robotic shadow, sitting on the sidelines re-electing and enriching itself. In the 18 years since 9/11, the United States has spent and obligated close to $6 trillion dollars on fighting wars in Iraq, Syria, Afghanistan and in dozens of countries. We are in so many places even Congress has lost track.

And just what do we have to show for it?

Failed nation states, hundreds of thousands of dead civilians, a massive refugee problem we can see from space, an army of homeless veterans, a mental health crisis in the military, a degraded environment, a much warmer planet, and mass shootings here at home by lone gunmen.

In the corporate media narrative, our republic has been subverted by Trump’s unique brand of sociopathic calumny, with the help of his party’s commitment to voter disenfranchisement and gerrymandering. Yet, we must ask why was the nation so vulnerable to such perfidy?

Because it was already rotten to the core.

The awful truth is that we’ve been living in an age of government disinformation for a long time now. If anything, Trump merely exploited the cynicism and despair generated by the post-9/11/Great Recession period — where only the rich made off well, while the ranks of the struggling swelled.

Both the anti-Trump right and many liberals perpetuate the notion that Trump’s lying constitutes a bloodless coup d’état that has overthrown a virtuous nation. But long before the gold-plated real estate tycoon’s name was on a ballot, Trump’s rise to power was possible thanks to the decades-long erosion of those institutions that were designed to prevent such flagrant self-dealing — and which instead morphed into promoting it.

Yet, thanks to the collective social amnesia and media spin machine there is a prevalent belief that the only way for a national moral restoration is for Joe Biden, Vice President during eight years of the post–9/11 global war on terrorism, to be elected President. But you don’t get Trump-Pence without an Obama-Biden; as the cycle of leadership of both parties prosecuted a perilous global war on terrorism and degraded the checks and balances the framers constructed.

Trump’s ability to run rings around Congress, as he pillages and loots from inside the government by directing official business to his Trump properties, is the consequence of the legislative branch abdicating its responsibilities under both Republican and Democratic administrations that each expanded the purview of executive power to monarchial proportions.

There’s no better example of this myopic opprobrium on Trump than the media maelstrom set off by his faux tweet forecast that included Alabama in the list of states “most likely to be hit (much) harder than anticipated” by Dorian. Speculation over the provenance of the Sharpie pen doodle on the official weather map Trump offered from the Oval Office as proof of his inaccurate assertion has dominated a week of news cycles.

While it’s true, as Trump’s critics charge, that Presidential lies about something as fundamental as a national weather forecast in the midst of a hurricane alert puts the public at risk, so did saying the air was safe to breathe in lower Manhattan after the Sept. 11 attack; as did saying that Iraq possessed weapons of mass destruction as a pretext to fight a war we are still fighting.

In fact, 18 years after the attacks, we have very real body counts for both of those federal government lies that pre-date Trump’s ascension.

In the case of former New Jersey Governor and EPA Administrator Christie Todd Whitman’s assertion in 2001 that the air in lower Manhattan was safe to breathe, the death toll from those who have succumbed to a myriad of diseases and cancers from breathing that air is officially approaching 3,000 — almost the same as the number of people who were killed by the terrorist attack on September 11.

It is almost twenty years since the Bush administration misled the public so they could open up Wall Street, and we have not seen the worst of the public health crisis that lie has wrought. According to the World Trade Center Health Program, which treats both first responders and survivors, there are more than 13,000 people with WTC-linked cancers — and we could see as many as 20,000 more.

More than 50,000 people are suffering with at least one certified WTC health condition.

The truth is the government has no idea who has actually died from WTC-related diseases. The way that the World Trade Center Health Program is structured only first responders are offered free annual health screening. The survivors, the estimated 400,000 people that lived, worked or went to school in lower Manhattan and western Brooklyn in the WTC toxic zone, have to wait to be symptomatic before being eligible for participation in the World Trade Center.

Nice. That’s one way to downscale a problem.

Three days after the 9/11 attack, it was former New Jersey Governor Christie Todd Whitman, then head of the Environmental Protection Agency, who told reporters that “the good news continues to be that air samples we have taken have all been at levels that cause us no concern.”

That upbeat and inaccurate statement was uttered as the fires at the World Trade Center site continued to burn and smolder, as they would for month after the towers collapsed.

Two years after 9/11, a review by the EPA Inspector General concluded EPA “did not have sufficient data and analyses to make such a blanket statement,” as “air monitoring data was lacking for several pollutants of concern.”

Despite the reality that samples taken indicated asbestos levels in Lower Manhattan were between double and triple EPA’s limit, the CEQ described the readings as just “slightly above” the limit the EPA IG found.

And when the EPA’s Inspector General tried to determine who had actually written the press statements they “were unable to identify any EPA official who claimed ownership” because investigators were told by the EPA Chief of Staff that “the ownership was joint ownership between EPA and the White House” and that “final approval came from the White House.”

Some of those students, now young adults, are suffering with WTC-linked rare cancers and diseases.

Today, former Governor Whitman, an anti-Trump Republican, is a frequent guest on MSNBC. Of all the times I have watched her appearances on the cable news outlet, she has not been asked about her central role in the Bush administration’s betrayal of the public trust after 9/11.

Because, according to the corporate news media, official lies only started when Trump took office.