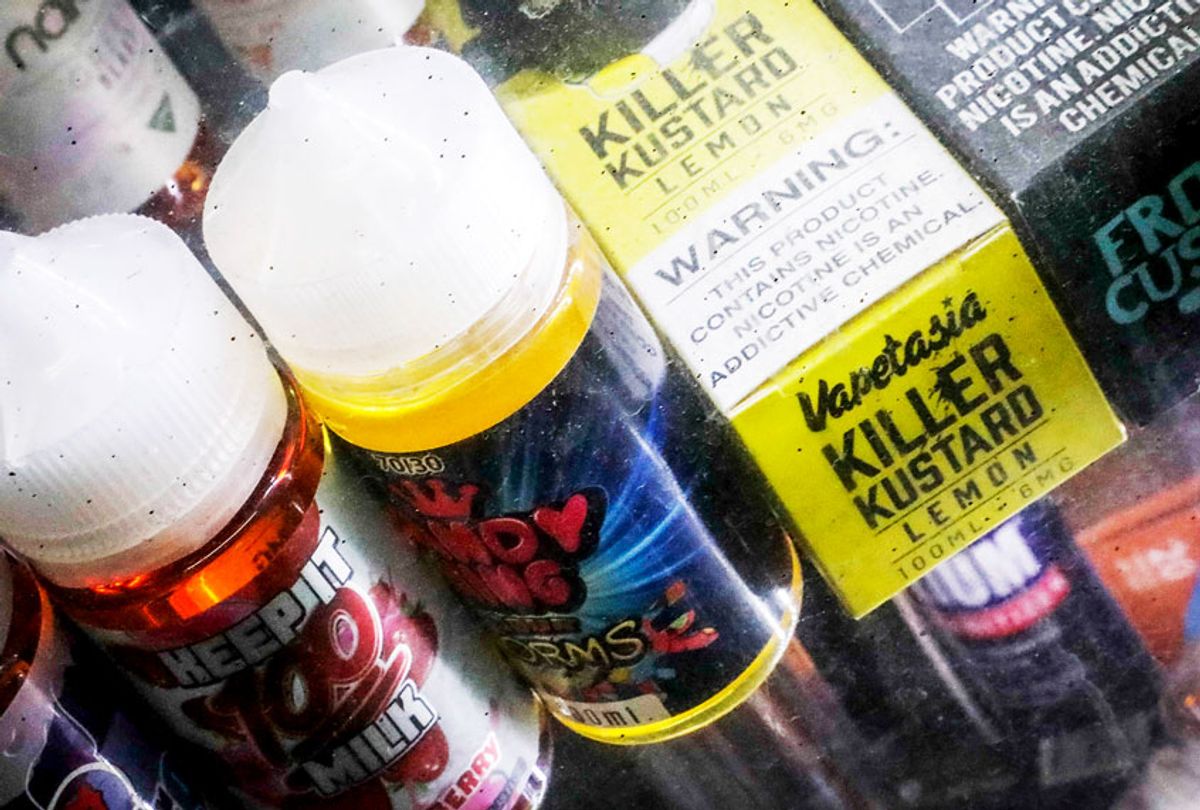 Flavored vaping solutions are shown in a window display at a vape and smoke shop, Monday Sept. 16, 2019, in New York. New York Gov. Andrew Cuomo is pushing to enact a statewide ban on the sale of flavored e-cigarettes amid growing health concerns of vaping. (AP Photo/Bebeto Matthews)
--

A 40-year-old California man died from a mysterious lung illness linked to vaping last weekend, marking the second death in the state and seventh in the country. While the Centers for Disease Control and Prevention (CDC) is still investigating the cause of the nationwide outbreak, new research has surfaced that found a food additive and potential carcinogen, pulegone, has a high presence in electronic cigarette liquids and smokeless tobacco products. Pulegone is an organic compound historically used in flavoring agents.

“Our analysis suggests that users of mint- and menthol-flavored e-cigarettes and smokeless tobacco are exposed to pulegone levels higher than the FDA considers acceptable for intake in food, and higher than in smokers of combustible menthol cigarettes,” Sven-Eric Jordt, Ph.D., a professor of the Department of Anesthesiology at Duke University and lead author of the study, said in a statement.

The study, which was published this week in JAMA Internal Medicine, found that pulegone is present at alarmingly high levels in menthol and mint flavored e-cigarettes and smokeless tobacco products. The U.S. Food and Drug Administration banned pulegone as a food additive last year, but despite the ban researchers found it present in smoking products that are under scrutiny today for causing a potentially fatal lung illness.

"Our findings suggest that the FDA should implement measures to mitigate pulegone-related health risks before suggesting mint- and menthol-flavored e-cigarettes and smokeless tobacco products as alternatives for people who use combustible tobacco products," Jordt said.

Jordt said in a statement that the tobacco industry has “long known about the dangers of pulegone and has continuously tried to minimize its levels in menthol cigarette flavorings.”

There are a couple limitations to the study. One is that the FDA’s ban on pulegone is based on animal consumption data. The second is that there is no data regarding the toxicity from inhaling pulegone versus consuming it. However, it adds to the growing pile of evidence around the lack of regulation of e-cigarettes, a political problem which many experts believe to be the partial  cause of this latest mysterious vape-related disease.

“The fact that e-cigarette[s] have been allowed to be in this unregulated quasi-state for so long is really why we are here now,” Erika Sward, National Assistant Vice President of Advocacy at the American Lung Association, told Salon earlier this month. “Because the FDA took forever to assert authority over e-cigs and then delayed the review of each of these products is really at the heart of why we are having this cluster of illnesses.”

As Sward said, the FDA has the authority over the components in the parts of e-cigs.

“Regardless of what is found in the products themselves that are causing the pulmonary disease cluster, FDA has authority over the components,” she said.

In 2018, Salon reported how some of the chemicals used to add flavor to vaping are billed by manufacturers as safe, because the FDA has approved them for ingestion. Yet no one knows for sure if you can breathe the same chemicals safely, and many chemicals approved for ingestion become toxic after combustion. Diacetyl, which the Occupational Safety and Health Administration has warned workers about inhaling because of its link to the respiratory disease bronchiolitis obliterans (colloquially referred to as “Popcorn Lung”), was present in 75 percent of the flavored electronic cigarettes tested.

Officials have not been able to pin down one contaminant, ingredient, or counterfeit, linked to all the illnesses yet.

“The focus of our investigation is narrowing, and that is great news, but we are still faced with complex questions in this outbreak that will take time to answer,” Ileana Arias, CDC acting deputy director for noninfectious diseases, said.