"Today, we celebrate. Tomorrow, we'll be in the streets." 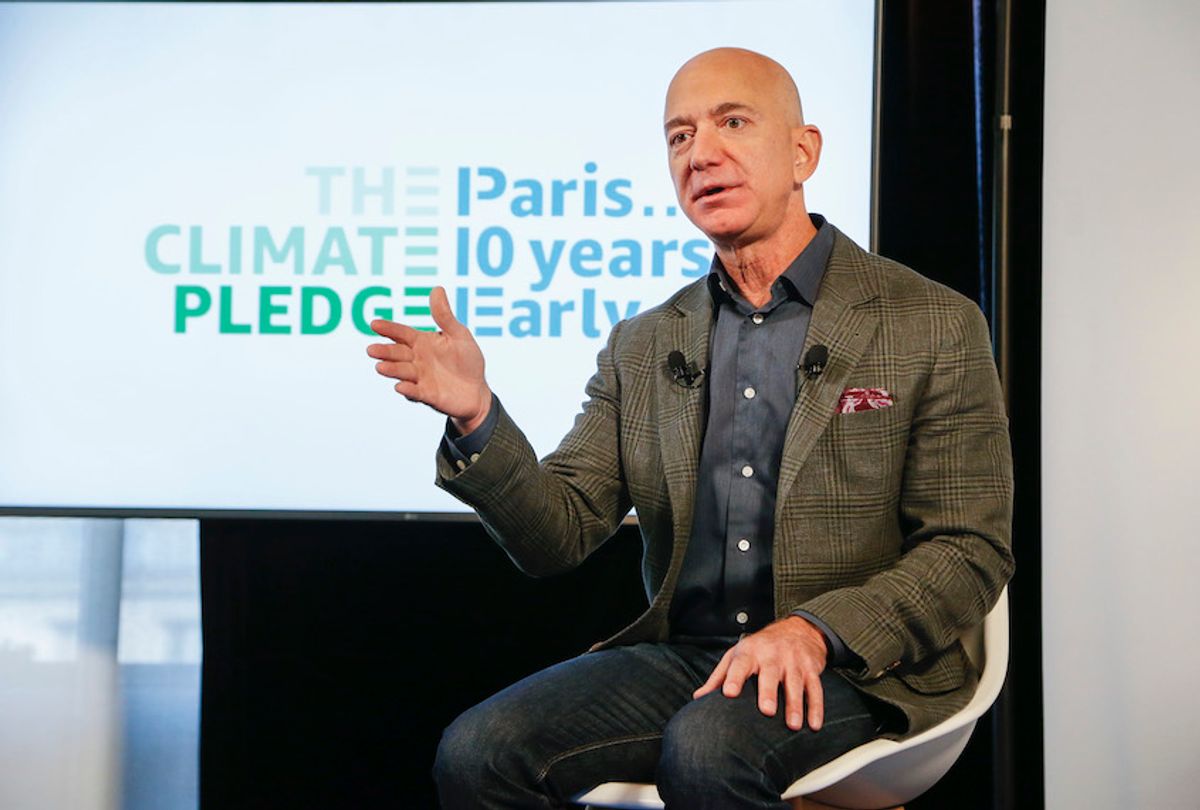 Amazon CEO Jeff Bezos announces the co-founding of The Climate Pledge at the National Press Club on September 19, 2019 in Washington, DC. (Paul Morigi/Getty Images for Amazon)
--

Amazon workers who plan to walk off the job Friday in support of the Global Climate Strike celebrated the power of employee pressure on Thursday as CEO Jeff Bezos released a plan to combat the climate crisis — even as they and outside critics noted that the paltry proposal shows the world's richest man still doesn't get it when it comes to the planetary emergency.

Bezos said the company plans to reduce its carbon emissions over the next two decades, becoming carbon-neutral by 2040. Amazon's operations will run on 80 percent renewable energy by 2024 according to the pledge, and Bezos plans to use electric vehicles for deliveries and regularly report on Amazon's emissions.

Amazon Employees for Climate Justice, the coalition that includes more than 15,000 workers who plan to strike on Friday, said the release of the plan demonstrates the importance and power of direct action.

Bezos stressed that under the plan, Amazon is scheduled to reach its goal ten years ahead of the timeline the Paris climate agreement put forward for world governments in 2015 — but Amazon workers noted that the Paris accord's originally stated goals are insufficient to avert climate catastrophe and called on their company to put forward a more aggressive plan.

"Amazon's Climate Pledge is a huge win for Amazon Employees for Climate Justice and we're thrilled at what workers have achieved in under a year," the group tweeted. "But we know it's not enough. The Paris Agreement, by itself, won't get us to a livable world. Today, we celebrate. Tomorrow, we'll be in the streets."

As outlined in the demands they released earlier this month, Amazon workers want the company to cut all carbon emissions by 2030.

Author and Climate Strike supporter Naomi Klein applauded the employees for continuing to apply pressure to the company.

Greenpeace welcomed Bezos's pledge to help meet the Paris agreement's goal of limiting global warming to 1.5 degrees Celsius, but demanded transparency from the company about its carbon emissions.

"While the purchasing of one hundred thousand electric vans is certainly more than a token investment, Amazon is still one of the few companies who have not published its carbon footprint," said Gary Cook, senior corporate campaigner at Greenpeace USA. "We are still missing how fast its emissions are rising and a sense of what effort is needed to achieve these commitments."

Bezos said earlier this year that Amazon would disclose its carbon emission levels by the end of 2019, but the company has yet to do so.

Cook also questioned Amazon's level of commitment to reigning in all the emissions it contributes to, both directly and indirectly, considering its relationships with the oil and gas sector.

"Throwing money at carbon offsets and continuing to support the oil giants find even more oil is an early indication that Jeff Bezos doesn't understand the transition that is needed," Cook said.