4 reasons why we’ll never see another show like "Friends"

Since "Friends" premiered, both the television industry and the sitcom genre have undergone huge transformation 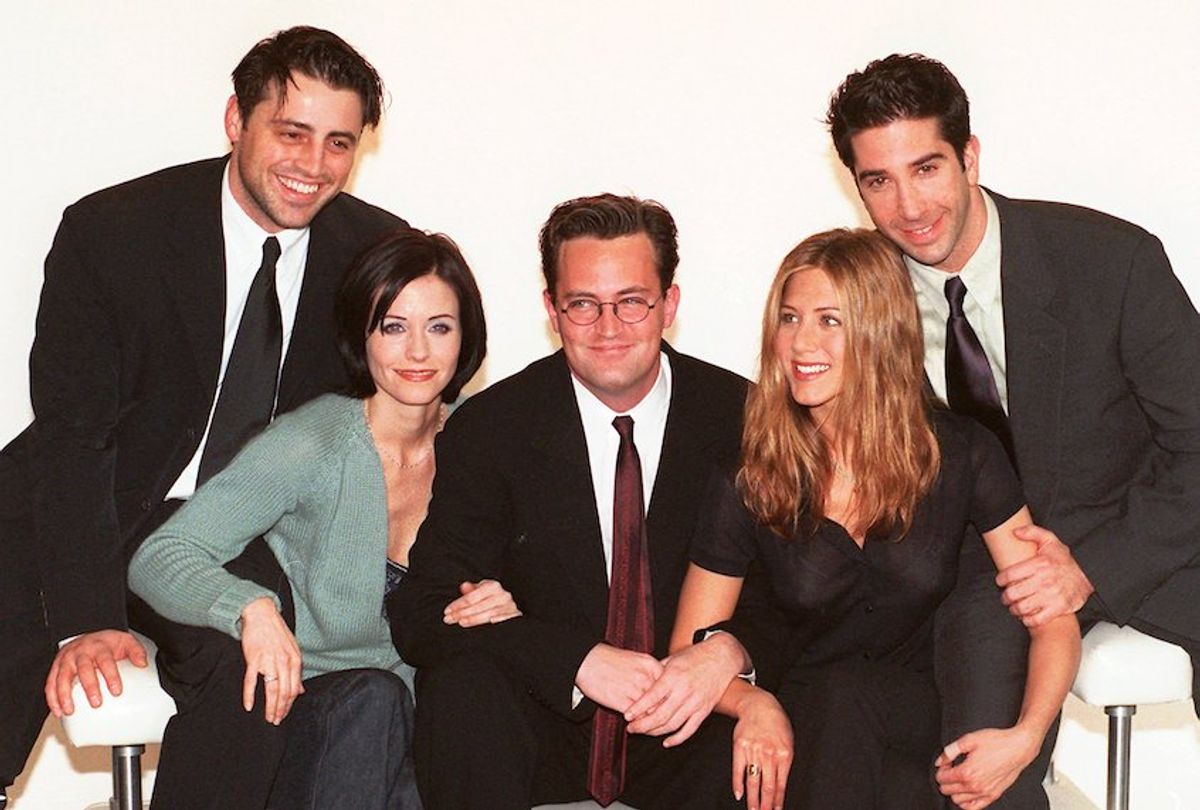 Cast members of the television sitcom "Friends" pose for photographers at the studios of Channel 4 in London Wednesday, March 25, 1998. (AP Photo/Lynne Sladky)
--

On Sept. 22, 1994, six telegenic 20-somethings frolicked in a fountain in front of credits that announced the arrival of “Friends,” a new NBC sitcom that would forever change television.

As sitcom scribes scrambling to land on writing staffs during the mid-1990s, we witnessed — with awe and a bit of envy — how “Friends” instantly became a red-hot comedy commodity. According to Nielsen Ratings, it was a top-five most watched program for nine of its 10 seasons.

The series was a ratings juggernaut during its network run, but its afterlife in syndication and streaming has been just as remarkable.

Now we’re TV and screenwriting professors in Emerson College’s Comedic Arts Program. And we couldn’t have ever predicted that our current crop of students would be just as spellbound by Ross and Rachel’s romance, Monica’s lovable neuroses and Joey’s passion for sandwiches. Netflix recently paid a whopping US$80 million for the rights to run the show through 2019.

Networks would love to replicate the series’ success. But the realities of the television landscape today make it unlikely that we’ll ever see another series with as much of a cultural impact as “Friends.”

Here are four reasons why.

The television season was once as certain as death and taxes.

Shows started in September and ran until May. Most had an average order of 22 episodes per season, with each episode airing once a week. This allowed viewers to make tuning into their favorite show a part of their weekly routine over the course of nine months. From 1994 to 2004, NBC produced 236 episodes of “Friends,” an average of 24 episodes per season.

Today, television seasons are much shorter. While the occasional sitcom still receives that coveted 22-episode order, others get considerably less, and this includes those with a proven track record.

For example, even though “Brooklyn Nine-Nine” has won a Golden Globe for Best Comedy, NBC greenlit only 13 episodes for its upcoming season.

There are a host of reasons for this shift, from star actors being less willing to commit to so many episodes to changes in the way syndication works. But shorter seasons mean viewers have less of an opportunity to become deeply invested in the show and its characters.

Back in 1994, there were only four major broadcast networks: ABC, CBS, NBC and Fox. A limited number of networks meant only a limited number of programs would air — making it that much more likely that a popular show would attract a huge swath of Americans.

In 1994 and 1995, an average of 75 million people tuned into NBC on Thursday nights. NBC rolled out the slogan “Must See TV” to market its Thursday night blockbuster comedy lineup, which, in addition to “Friends,” included heavyweight series such as “Mad About You” and “Seinfeld.” To miss out on a hit show meant being out of the loop the next day when everyone was talking about what happened.

But over the past decade, cable and streaming have completely upended this model.

Over the first six months of 2019, more than 320 scripted shows aired on television networks, cable and streaming platforms.

The massive viewing menu has fragmented audiences. No longer beholden to network schedules, viewers can watch what they want, where they want and when they want.

Like “Friends,” “The Big Bang Theory” was a hugely popular sitcom on network TV about a group of friends. It ran for 12 years, from 2007 to 2019. Approximately 18 million people watched the series finale, which also aired on a Thursday night.

But the “Friends” series finale blew it out of the water: On May 6, 2004, more than 52 million people tuned in to say goodbye.

In today’s marketplace, getting a show to that level of “Must See TV” status is an almost impossible feat for even the most seasoned producer.

Sitcoms are categorized as “single-cam” or “multi-cam,” which refers to the style of filming. Multi-cam shows such as “Friends” and “The Big Bang Theory” are typically shot on a sound stage in front of a live studio audience. They’re often enhanced by a laugh track, and the final product resembles a filmed play.

Single-cam shows such as “Girls” and “Brooklyn Nine-Nine” are produced more like films. They’re not limited to a small number of sets and locations.

While live studio audiences can infuse multi-cams with energy and immediacy, single-cam shows tend to have more storytelling flexibility, and they can possess a level of visual intimacy that’s difficult to attain in multi-cams.

In 1995, when “Friends” received its first Emmy nomination for Best Comedy Series, three of the four other nominees — “Seinfeld,” “Mad About You” and “Frasier,” which took the prize — were multi-cam sitcoms on NBC.

In 2019, the list of Best Comedy Series contenders is bigger, with seven nominees. But each is a single-cam show; there’s not a multi-cam or laugh track in the bunch.

4. The rise of the "dramedy" and the anti-hero

In a way, “Friends” creators David Crane and Marta Kauffman, along with their original producing partner, Kevin Bright, revolutionized the sitcom genre.

The new show they were pitching — originally titled “Insomnia Cafe” — was still a multi-cam, but it was a very different kind of multi-cam.

The team envisioned a multi-cam that was denser, packed with more storylines and scenes to accommodate a six-lead ensemble. While an episode of an older, more traditional multi-cam like CBS’s “All in the Family” might make do with six to 10 scenes, two storylines and fewer sets, “Friends” would have at least three storylines and up to twice as many scenes.

“We don’t want it to feel like anything else on TV,” Crane and Kauffman wrote in their original pitch document. “We want a fast, quick cutting style. The whole show should have a fast, over-caffeinated feel.”

“Friends” took the genre in a new stylistic direction, and subsequent multi-cams like “How I Met Your Mother” continued the trend.

But sitcoms were already undergoing an even more dramatic evolution. Whereas most traditional multi-cam sitcoms were expected mainly to deliver big laughs, an emerging spate of single-cam shows started infusing comedy with darker themes and edgier storylines.

Known as “dramedies,” they became even more popular with the proliferation of streaming platforms. Viewers who have embraced the stark realism of shows like HBO’s “Girls” and Amazon Studio’s “Transparent” often find traditional multi-cams hokey.

Then there’s been the rise of the sitcom anti-hero, a new kind of lead character who could be flawed and not always likable — think Larry David in “Curb Your Enthusiasm” or Julia Louis Dreyfus’ Selina Meyer in “Veep.”

Will modern, more jaded viewers who have crossed over to dramedies ever be willing to embrace the glossy, rom-com fluff of a show like “Friends”?

The current TV ecosystem might not be amenable to cultivating another “Friends,” but that shouldn’t detract from its impact on the genre.

It changed the game, raising the bar for all sitcoms to come.