Back to school, with a baby: What living in a Harvard dorm taught me about being a mother

From a distance, if you squinted, maybe I — now 36 — was even a student, with all of that discovery ahead of me 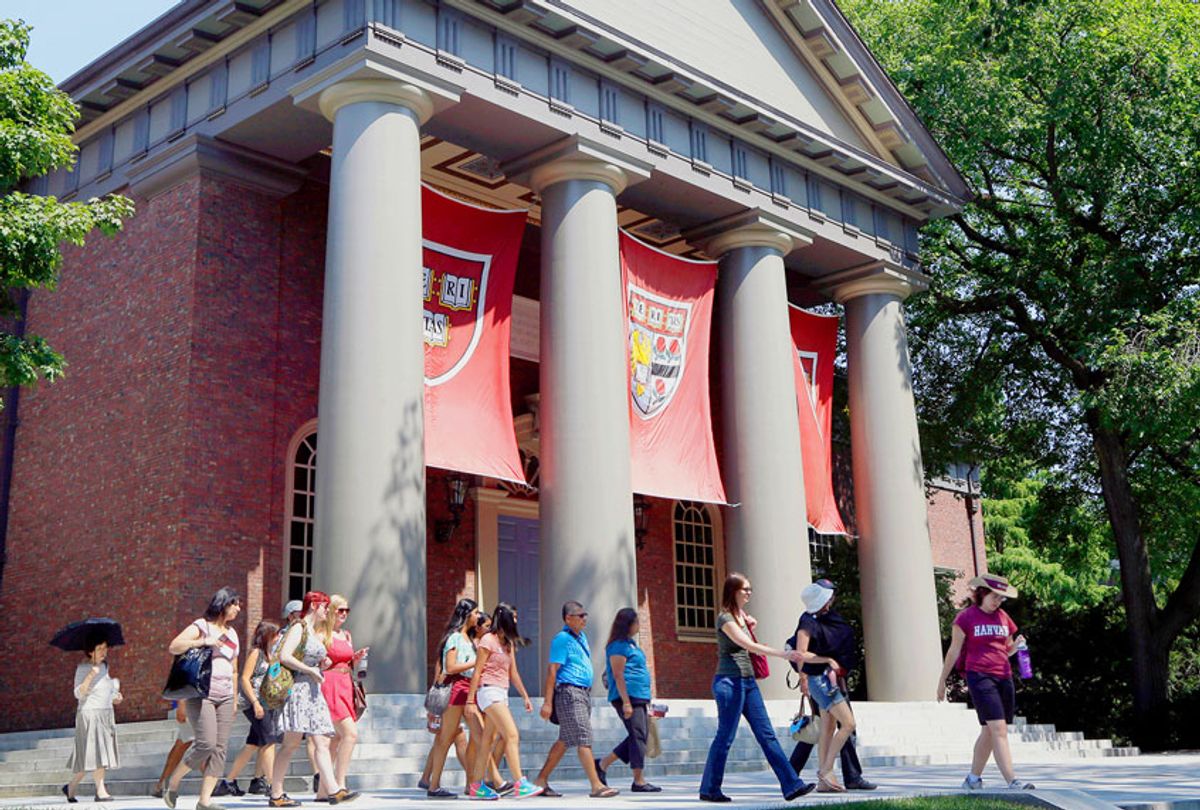 A tour group walks through the campus of Harvard University in Cambridge, Mass. (AP Photo/Elise Amendola)
--

Three years ago, I moved with my newborn baby and husband into a Harvard residential house, the college’s version of a dorm, called a house in part due to the presence of families like mine that serve to make the spaces less institutional and more welcoming. In our house, we have a lively courtyard, a library and other families — three babies born in 2019! — as well as dogs and cats, hammocks, and of course students: playing indecipherable yard sports, speaking dozens of languages, talking about electrifying ideas, studying and partying and figuring out who and how they wish to be as adults in the world.

When we moved into the dorm I was 36, but still I harbored delusions that I might have been mistaken for a student. I had an ID that did not even say "graduate student," but it did say Harvard, so I could enter certain buildings around campus and imagine where I might sit at the seminar table, were I 18 years younger, and many leagues more ambitious. My leopard print baseball cap was pulled low over my forehead wrinkles, and no one could tell that my trendy knapsack was filled with diapers rather than books. From behind, from a distance, if you squinted, maybe I was among the throng arriving back to school, en route to reunite with beloved friends, to squeal and embrace after a summer apart.

But come a bit closer and the truth was plain: I was no undergraduate. I was bound up in a different sort of embrace with my six-month-old baby, whom I wore everywhere that fall, and who did sometimes squeal at a head-turning volume. Grey hairs shot through my ponytail; while the students were sun-kissed and bare-skinned, I had the pallor of a person who had not had a solid six hours of sleep in as many months. Bits of fabric seemed to trail from me: two long tails of my baby wrap, a spit rag tucked into a bra strap, the corner of a tri-fold piece of organic cotton from the reusable diapers we had not yet forsaken with an eye to the chaos of our new shared dormitory laundry room.

Every back-to-school season calls up some nostalgia in me, but the pangs were perhaps more acute that first fall semester as I struggled to inhabit my new role as a mother, while balancing freelance work and trying to write a novel alongside some of the brightest and most ambitious young people I’d ever met. Some mornings at brunch in the dining hall (I maintain that no one appreciates access to a dining hall more than new parents), I bristled at their 11 a.m. laments at how tired they were, even as I envied them their Sunday afternoon freedom.

One night when my husband (who, as official resident tutor, was the one responsible for such tasks) was traveling, I had to shut down a party that was spilling out into the hallways, still thrumming past the university-wide enforced quiet hours. I wore spit-up stained nursing pajamas, and the expression of a woman all too familiar with 2 a.m. My baby was in tucked in her bassinet, but she slept in our room and we didn’t use a monitor in our small space, so there was a ribbon of terror at leaving her, even if only to follow the deep thump of the bass from down the hall.

When the door to the students’ room opened, I was struck by how absolutely foreign the party appeared to me, though it was like any number of parties had by college students anywhere: loud music, furniture all pushed to the periphery, people sweating and lights low. No snacks or small talk. Oh, that’s right, I remembered. That’s what parties used to mean — music that vibrated in your guts as you danced and jumped and flirted for hours, hoping to make out with your crush or a cute stranger. No part of me wanted to change out of my postpartum pajamas and enter the crimson light of that sweaty room. I felt instead that our lives were comically, even cosmically, distant. We were on different planets.

I didn’t want to join their party, but I wanted to remember that there was a version of me that understood this ritual to be a party. The haze of new parenthood was so consuming and transformative that it was a gift to live among these students and remember an earlier version of myself at a time when she could not have felt more foreign, when I would not have been able to recognize her had she been the one to answer the door at the party that night.

My new neighbors allowed me to appreciate the intensity of college friendships that kept you up all night dancing and talking even as the most intense relationship in my own life was with someone who could not yet walk or speak. I had moved to a land of altogether different late nights, but the glimpses I got of their planet were enough to make me grateful to be standing on the shore of my own, overwhelming and unfamiliar as it still was.

I’m guilty, like so many new parents, of posting to social media sweet pictures of their briefly-sleeping babies with some variation on the caption: Another wild Saturday night. But this was the party where I belonged now, no one mistaking me for an undergraduate, or for anyone so wild and young and free. No. Instead I am bedraggled and infatuated with my new burden, her weight on my heart as loud and powerful as any quiet-hour-violating bass, the party in my own dorm-room-cum-apartment raging all night: milk-drunk, sleepless, feral with a whole new world of love and hunger.

Elizabeth Ames is the author of the novel "The Other's Gold," out now from Viking. She currently lives in a Harvard dormitory with her husband, toddler, and a few hundred undergraduates.