Can you reverse engineer nostalgia by eating foods associated with childhood artifacts? 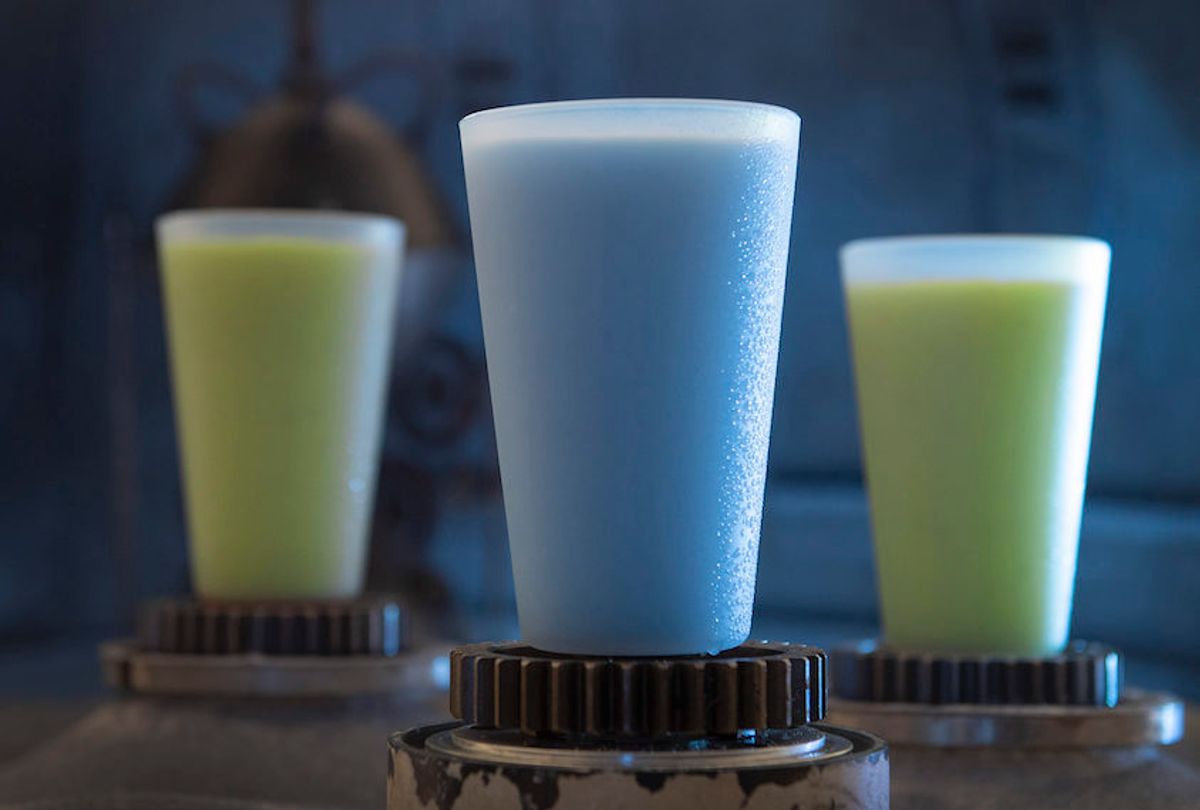 When I look up nostrophobia to see if it is real, Google suggests I might really mean gastrophobia, which is the name of a web comic from Australia. At least, that's as deep as Google is prepared to go on page one. The fear of going home, the unsettling predictions of the algorithm suggests, is located in the pit of the stomach. Google makes this connection, because enough people have gone looking for a web comic from Australia and stumbled instead into their darkened childhood kitchens, bewildered, the taste of dread on their lips. Which reminds me, I went to Disneyland's Star Wars: Galaxy's Edge recently and drank the blue milk.

The robin's egg-colored drink — as seen in "Episode IV," a still-innocent Luke Skywalker pouring it over his stifled ambitions, his naïve yearning for adventure, at dinner with Uncle Owen and Aunt Beru before he stomps out to drink in the binary Tatooine sunset — should taste like unanswered questions about fathers, legacies of trauma, the order to wipe a memory clean and the defiance of said order, like the gaps between what we hunger for and what can feed us. Which is a long way of saying it should taste blue.

Another way of tasting blue is to recall the flavors of childhood: cerulean ICEEs and Otter Pops, neon gummi sharks, Kool-Aid, Dum Dums, a shattering sweetness the color of a spring funeral sky, which scientists in flavor labs would like for us to identify, preposterously, as a varietal of raspberry. Really, the flavor is blue.

What Luke's milk actually tasted like, according to Mark Hamill who had to drink it on set, was "warm, oily, sickly-sweet" and "gag-inducing." It might interest you then to know that the blue milk served in Disneyland's Star Wars: Galaxy's Edge is not that. Please also understand, it barely tastes blue at all.

In Disneyland's Galaxy's Edge — unlike at its Orlando counterpart, where the booze has been flowing a bit more freely across Walt's empire of late, because (I can only assume with grudging admiration) Florida — blue milk is only served virgin. There's time for all that at the Galaxy's Edge cocktail bar, Oga's Cantina, a more industrial-chic counterpart to the Mos Eisley dive that imprinted on me early and inspired so many lost nights in various wretched hives of scum and villainy, which is another way of saying my twenties. Oga's comes complete with an upmarket menu for grown-up drinkers looking to treat themselves. I enjoyed a high-octane Jet Juice, their spicy bourbon cocktail, and a Jedi Mind Trick, which is blue in color but a decidedly more adult citrus-floral in flavor. If you order a glass of white wine, I might as well warn you: It's going to come to you already blued.

The soundtrack at Oga's is provided by robot DJ R3X instead of an analog jams-kicker like Figrin D'an and his adenoidal Modal Nodes and is ruled by a door worker with an ironclad reservation list. Snacks are minimal at Oga's — you're better off noshing at Docking Bay 7, where the chilled Yobshrimp (indistinguishable from Earth shrimp, we really are one universe) noodle salad, tossed with a citrusy vinegar sauce and crisp vegetables, can take the edge off.

Outside in the sun, though, sipping my blue milk to rehydrate, I suspected the sweet blended iced drink — a kind of theme-park cousin of horchata — might pair exceptionally well with a decent white rum if not for my pockets, empty of contraband; if not for Florida being light years away. The non-alcoholic drinks at Disneyland's Milk Stand cost 7.99 units, as the cast member tells me in character, which is the currency of Black Spire Outpost, a scrappy village on the far-flung planet of Batuu, both similar to and yet also not the Tatooine of my heart or the Jakku, perhaps, of yours. On whether Batuu is canon, opinions can differ. I am not here to argue but to pretend the fly the Millennium Falcon and buy things like this milk, which also comes in green. In fact, I order both milks — the blue and the green —  because I'm insatiable not so much for a place as for a time, a yearning which — of course — I also fear.

Does the milk taste as blue as it looks? Not really. There's the undercurrent of the coconut and rice milks complicating the sweet flavor, which if you put a blaster to my head, I would identify as a pleasant if indiscriminate berry. Is it better than the green variety, modeled on the hand-squeezed thala-siren sea sow milk Luke drank while exiled on the Porg-infested planet of Ahch-To? I lied; I am here to argue. Of the two alien milks — and this bet I would have lost — the green is better.

I'd also be lying if I said that realization didn't shake me. I came to Galaxy's Edge with a question: Can you reverse engineer a feeling of nostalgia by eating foods for the first time, which are closely associated with beloved childhood artifacts? (Like, could eating a madeleine awaken a strong rush of memory-laden emotion for a longtime Proust fan who had previously only encountered them on the page?) I bet on blue.

Because Batuu is not on my personal star map, and because the art direction of this whole part of Disneyland trades heavily in the feel of the most recent era of films — dance with the one that brought you, I get it — I assumed that the blue milk, that rare recognizable relic from the "Star Wars" of my childhood, all three films and 30,000 toys of it, would taste the best to me by virtue of transferred nostalgia. I was wrong. The blue milk tastes neither blue enough to properly evoke the stickiness of hot walks to the corner Circle K nor foreign enough to light-speed me back to Tatooine — to before I knew all the things I can't unlearn. It's a decently tasty, sweet, blended iced berry-flavored drink — that's all.

The green milk, on the other hand — also iced, blended with coconut and rice milks — packs a citrusy flavor with a mild and pleasant grassiness that would not be out of place with a shot of spirulina or bee pollen if Batuu suddenly caught the wellness bug. If blue milk comes poured from plastic pitchers at family dinners heavy with the things that can't be said, green milk is self-served — one of the many intentional decisions that makes up an adult life. It tastes, well, green: the color of new growth, not of blue mirages hinting of the past, the one you seek or the one you fear.