From fat bears to "Nature": TV displays our complicated feelings about the natural world 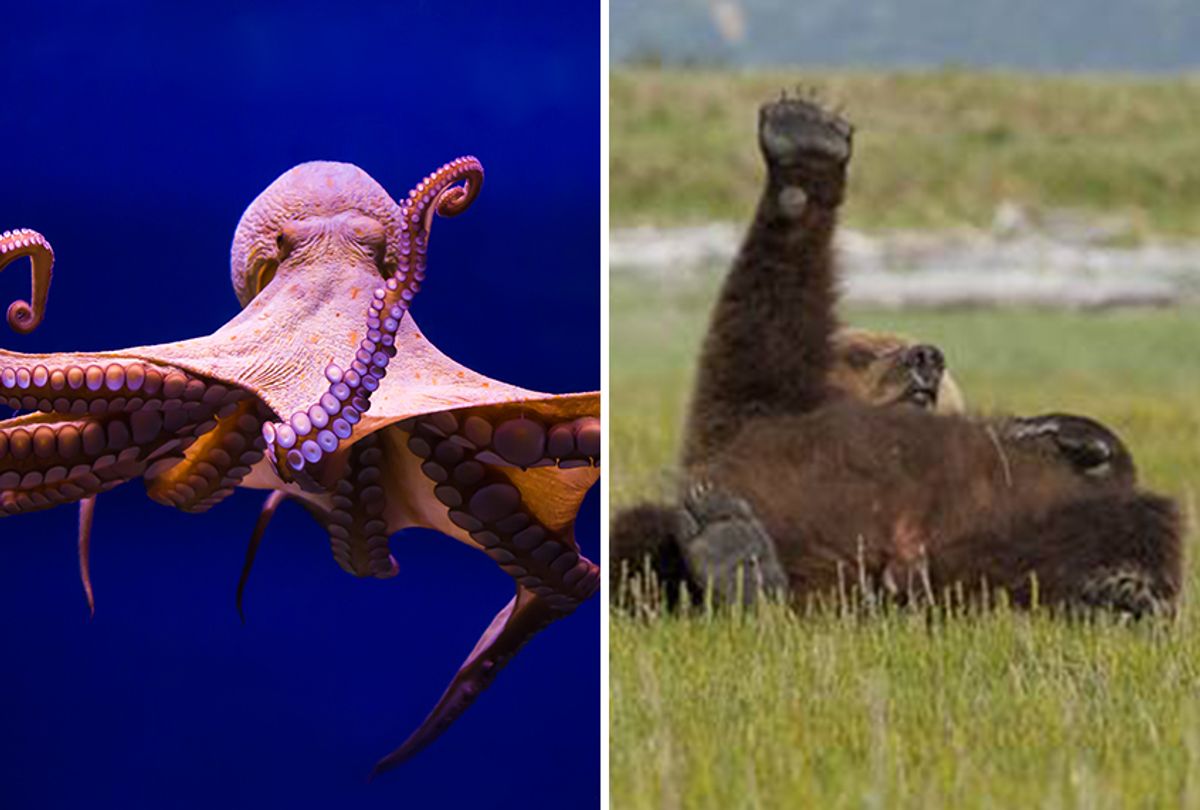 Fat Bear Week has arrived, and not a moment too soon. The BBC America-branded event, now in its fifth year, invites the public to enjoy a live camera feed direct from Brooks Falls in Alaska’s Katmai National Park, where groups of ursine pals munch their way to last call at the salmon buffet before winter arrives.

And why not? Right now there are far worse visuals to absorb than the sight of wild bears serenely sitting in frothing water and waiting for fish to swim into their paws. Bears also may be the most anthropomorphized creatures in our culture; at a young age many of us were gifted with a toy effigy of such a creature, leading us to associate it with cuteness and security.

That’s why, in the middle of a tough day, watching these apex predators lazily catch and eat salmon in their natural habitat is a happy affair for everybody but the fish.

But then, the fish are there to feed the bears, a species we fear and respect for the same reason — its intelligence.  We tend to assume that non-mammalian sea life is driven by instinct and survives by luck and little else. Rarely do we consider the possibility that they might harbor some level of intelligence.

The 38th season premiere of PBS’ series “Nature,” debuting Wednesday at 8 p.m., might change that to a degree.  “Octopus: Making Contact” introduces viewers to Heidi, an Octopus cyanea or “day octopus” that Dr. David Scheel, a professor of marine biology at Alaska Pacific University in Anchorage, brings into his home to live with him and his 16-year-old daughter Laurel.

Scheel is part of a growing community of cephalopod researchers keen on quantifying the intelligence of these creatures, although he firmly tells viewers that his purpose in bringing Heidi into his home is not, as he says, to “do science.”

“I’m just trying to think a little bit,” he explains. “It’s a chance to be more available and more present for whatever the animal’s living day to day.” He also admits that Laurel wanted her father to get a pet for her. She was hoping for a dog. But as it turns out, she and Heidi end up bonding more than the 10th grader expected.

Scheel placed Heidi’s tank right in the center of the living room, where he and Laurel could watch her behavior – and more to the point of his casual experience, notice her watching them. Soon they realize Heidi recognizes his face and Laurel’s and can tell the difference between the two of them. She plays with the teenager, clinging to her arm when she isn’t ready to end their interactions.

And the surprises don’t end there. Throughout the hour we see Heidi solve puzzles, watch television and, in a scene Scheel claims to be a TV first, we see possible evidence that octopuses dream.

The title of this “Nature” hour tips its cards as to what documentary writer and producer David Allen and director Anna Fitch suspect audiences think about these creatures: “Making Contact” is the sort of phrase one associates with space research or speculative fiction about aliens, and the octopus and others of its ilk certain fit that image. Scheel refers to the film “Arrival” and the alien’s intentional resemblance to cephalopods, in fact, to illustrate the fascination, lack of understanding, and mild unease humans harbor for creatures like Heidi.

This also quietly points to a truth about the majority of nature specials and series that’s been pointed out many times by conservationists, the fact that regardless of the noble intentions of wildlife filmmakers and the studios that produce these shows, there’s a longstanding tendency to focus on the rock stars of the natural world. Discovery’s “Serengeti” gave us a live action narrative reminiscent of “The Lion King.” Sir David Attenborough creates entire family histories around orca pods and penguin survival stories in the “Planet Earth” series, or reminds us that we’re on the verge of losing the planet’s flora and fauna supermodel species in “Our Planet.”

Even a series as exhaustive as “Planet Earth: Blue Planet II” spends more time observing fish than their fellow tentacled sea dwellers, including one finned coral reef dweller that showed some signs of intelligence by using tools. (“Octopus: Making Contact” has its own version of that character in a wild octopus who uses what looks like a split coconut as a home, a hiding place, and a vehicle.)

That said, the age of memes and animal-centric social media has elevated the octopus into the strata of fascinating creatures, thanks to testimonials of overt acts of intelligence demonstrated when octopuses come into contact with humans – something Scheel gleefully says is happening with more frequency, shown by way of a viral video excerpt.

And this is an aspect of the episode likely to spur some debate. Scheel’s and Lauren’s adventures with Heidi fit the pattern of a heartwarming family narrative – basically it’s the video-journaled adventures of a single dad who welcomes an alien creature into his home, in part, to bond with his daughter. If it weren’t a PBS special, Will Smith could have bought the rights for a family movie to star in with Willow or Jaden. (Who says Laurel has to be a girl in the theatrical scripted version? Not Hollywood!)

But its premise also turns upon the very factor that is actively degrading the environment. In most nature series and documentaries, human proximity to nature is presented as a key factor in deterioration and disappearance of key ecosystems and habitats.

A version of this criticism also is lobbed at live events like BBC America’s Fat Bear Week too, by the way. To see the salmon leaping in those live feeds, one might fool themselves into thinking the furry residents of Katmai National Park have plentiful resources and aren’t being impacted by the ravages of climate change. But although Alaska salmon populations are believed to be healthy, king salmon has become less plentiful, and the size of the fishes in general are shrinking. More troubling is news of the possible opening of an open-pit metal mine near Bristol Bay, one of the last remaining pristine fisheries on the planet.

There’s nothing about these worrisome environmental concerns on the landing page of Fat Bear Week, probably because that would take away from our enjoyment of those fat bears.

To be clear, the minds behind BBC America’s nature event, and Scheel, Allen and Fitch have their hearts in the right place.

No other program about the natural world spends as much time viewing the octopus as something more complicated than very smart predators, maze runners or puzzle masters, or possibly as individual beings capable of bonding.

Several times during “Octopus: Making Contact,” Scheel returns to the central premise of the program. That is, what kind of connection is possible for humans to have with an animal so unlike us, one with three hearts, no bones, a beak with a venomous bite, and blue blood running through its veins? Is it possible to see aspects of ourselves in these very different-seeming and kind of freaky-looking creatures? And, it implies, can we perhaps see them as something more than food or objects of fear by doing so?

We’ve gotten so used to finding comfort in experiencing tiny corners of nature from a place of distance remove, brought to us by live camera feeds or lushly edited recordings productions that it’s almost easy to accept the loss of these miracles as inevitable.  But “Octopus: Making Contact” demonstrates the value and worth of bringing the earth’s alien ambassadors into our midst to better understand their uniqueness, and in doing so, champion their existence.

(By the way, your reward for reading an entire article about a “Nature” episode starring an octopus is the link to the Fat Bear Week live camera feed. No…thank you.)