"The View" receives Hillary and Chelsea Clinton with uncharacteristic bipartisanship

The talk show's hosts are on the same page as Hillary and Chelsea Clinton, authors of "The Book of Gutsy Women" 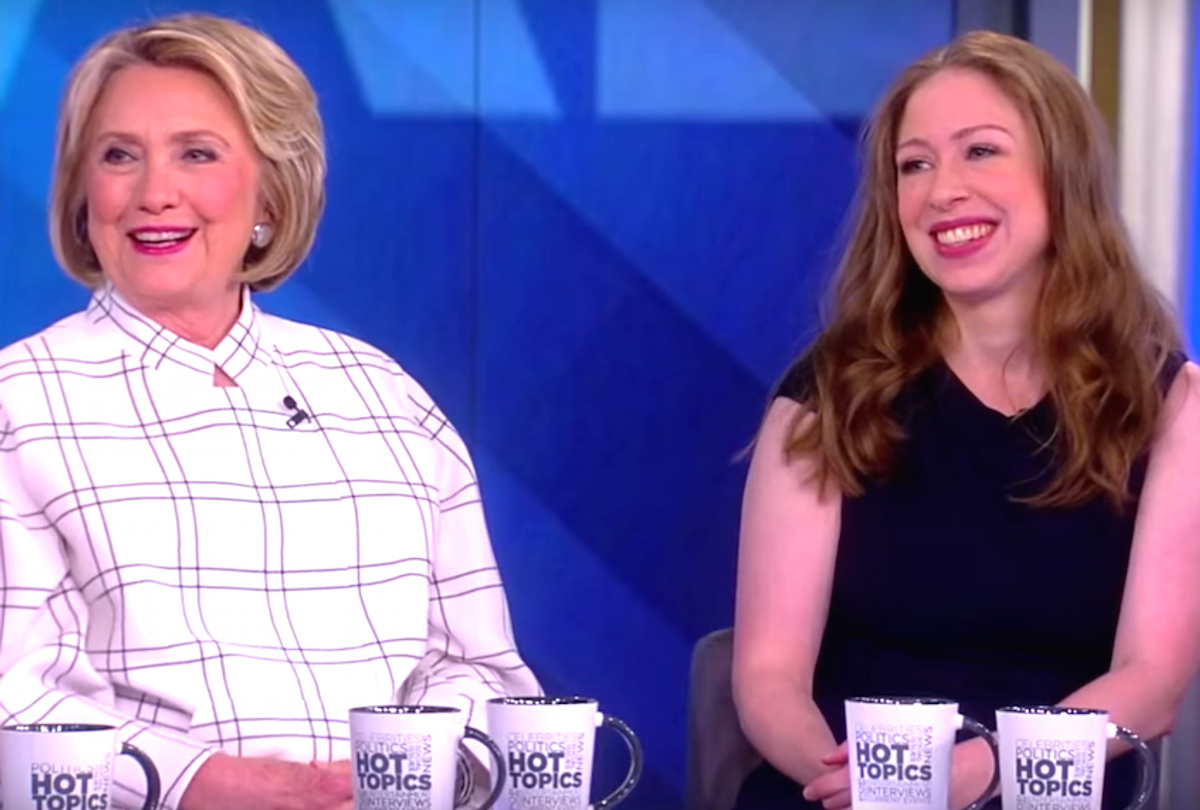 Time and again Hillary Clinton has said she's not running for president or any other office. Activist Chelsea Clinton currently has no plans to do so either. But do not be mistaken – the mother and daughter are campaigning for the 2020 election whether they intend to or not.

The Clintons made a joint appearance on "The View" Wednesday morning in support of their co-authored work, "The Book of Gutsy Women: Favorite Stories of Courage and Resilience."

"Gutsy Women" is a celebration of leaders, activists, and transformative women whose historic achievements personally inspired Hillary and Chelsea.  Importantly, their chosen profile subjects hail from across the political and social spectrum. As an example, when Hillary Clinton spoke about the book on "The View," she cited her and Chelsea's inclusion of Margaret Chase Smith, a staunch Republican.

"Gutsy Women" also highlights the stories of such usual suspects as Amelia Earhart, Harriet Tubman, Eleanor Roosevelt, Betty Ford (for making her battle with breast cancer public), Donna Reed, all of whom were mentioned during the Clintons' gauzy sit-down with Jane Pauley on "CBS Sunday Morning."

But citing Smith on "The View" is a savvy political move, and one meant as more than a performative gesture to appease vocally conservative "View" co-host Meghan McCain. In 1950, the Maine representative became the first senator to speak out against Sen. Joseph McCarthy and the House Un-American Activities Committee.

Her Declaration of Conscience is considered one of the most historically significant speeches of the 20th century. In Smith's view the nation sorely needed a Republican victory in 1950, and McCarthy's campaign appeared to be doing the trick.

"I don't want to see the Republican Party ride to political victory on the Four Horsemen of Calumny — Fear, Ignorance, Bigotry and Smear," Smith said near the end of her speech. "I doubt if the Republican Party could — simply because I don't believe the American people will uphold any political party that puts political exploitation above national interest."

For her part, McCain displayed no acrimony for Hillary or Chelsea, whose appearance took up most of the episode. Both McCain and Abby Huntsman, whose father also worked with the former Secretary of State, were quite affectionate with her and with Chelsea. The collegial relationship McCain's father John McCain had with the Clinton family in general leads us to expect nothing less.

Even so, the first headlines to come out of the Clintons' appearance on Wednesday's episode touted the moment McCain and Hillary Clinton passionately agreed. In Hillary Clinton's words, Julian Assange and WikiLeaks operated as an arm of the Russian intelligence service when it published tens of thousands of emails and attachments in July 2016, obtained by a hacking of the Democratic National Committee and personal email account of John Podesta, her 2016 presidential campaign chairman.

"I want to tell Republicans, if they'll do it to you," McCain said to Hillary, "They'll do it to us." Then, referring to her recent and famously heated exchange with Pamela Anderson, McCain added, "That's the part that I don't understand about WikiLeaks and the defense of Julian Assange…Thank you for agreeing with me!"

Neither Hillary nor Chelsea quoted directly from Smith's Declaration, perhaps in an effort to keep their "View" tour stop as non-partisan as their "Good Morning America" appearance the day before. But if you think that's even possible given how deeply polarizing the elder Clinton has been since her earliest days as a public figure, then I have an election to sell you.

With each fresh horror that has plopped into the news stream since November 2016, millions of people have silently or loudly pined for what might have been (or never would have happened) under a Clinton presidency.  So like it or not, what the Clintons think about the impeachment inquiry is of interest to voters.

Separately Hillary and Chelsea Clinton have written a combined 13 books.  Had "Gutsy Women" come out at any other time, the promotional focus would have been on its message of female strength and the many ways women have stepped up and answered history's call for justice and moral rectitude. Its message is sure to resonate with readers in the heat of a contentious presidential election, one whose outcome will determine whether many of the legal victories won by feminists will be rolled back.

But as much as the co-authors may have  hoped to keep the sole focus of their publicity tour on "Gutsy Women," lots of people watching were probably more curious to hear Hillary Clinton's thoughts on our current national disaster.

Or as Stephen Colbert crowed to Hillary when she dropped by his show on Monday night, "Your fault for coming on Ukraine week!"

It should not escape notice that the Clintons' first TV appearances this week, on "CBS Sunday Morning" and on Monday's "Late Show," played up more of the book's celebration of all-star feminist icons as opposed to political rabble rousers and whistleblowers such as "Silent Spring" author Rachel Carson, a former government employee of whom Chelsea spoke at great length.

"Gutsy Women" is published by Simon & Schuster, which is owned by CBS Corporation.  And Pauley and Colbert each took a softer approach with Hillary and Chelsea. Even when the "Late Show" host — no fan of Trump's — steered the conversation away from the book to drill down on the impeachment conversation, he teased out more of Hillary's sense of humor and Chelsea's warm protectiveness of her mother.

This is not to say that CBS blunted Clinton's edges entirely to serve its marketing purposes. Separately, Pauley and Colbert also point out that in 1974,  Hillary Clinton was part of the legal team that worked on the document spelling out the constitutional grounds for presidential impeachment, referring to President Richard Nixon. "As I like to say," she told Colbert, "you cannot make my life up. Really. You can't make it up."

She also gave credit to a lawyer who worked with her on that document: William Weld, the former governor of Massachusetts who is running against Trump for the Republican nomination.

What they were seeking to do then, Hillary told her CBS hosts, was to plainly spell out for American people what constitutes an impeachable offense. And she did something similar, in minutes-long concise and simple soundbites, in each of her appearances.

This will never, ever matter to anyone who can never see her as anything other than "Crooked Hillary."

But the audience for "The View" is one that both parties are desperate to win over – particularly Republicans, whose incumbent presidential candidate is performing badly with the white women voters who were crucial to Trump's 2016 win. Several recent polls indicate he's lost that demographic; and 2018's massive defeat of Republican congressional candidates bears out that data.

Hillary and Chelsea Clinton know this — hence the shout-outs to Smith, whose stated warning in 1950 should echo in the nation's collective conscience in 2019, and Carson, a foremother of the modern environmental protection movement.

This may be why Clinton declared in her multiple ABC appearances that staying with her husband after his infidelity became public is the gutsiest thing she's done, and she alludes to this in her book's segment on Eleanor Roosevelt.  Feminists might look askance at her for that choice, but that headline-grabber might make her seem more relatable to women who shun feminism but find themselves in a similar situation to hers.

This also explains why she responded to Huntsman's question of what she wishes she'd done differently with her 2016 campaign with an answer that speaks to the impossible standard of likability placed on women who run for office, or work in a corporate environment, or dare to exist in public.

You know, I'm a serious person, but I'm also a fun person. But I think I came across as too serious. I really believed that my job, especially as a woman and the first woman to go as far as I did, that I had to help people feel good about a woman in the Oval Office. A woman Commander-in-Chief.

So I may have over-corrected a little bit. Because sometimes people say, "Oh why can't you be like that?" or "Why don't you [sic] weren't you like that?'"...I did feel a heavy sense of responsibility and it was such that, you know, maybe I wasn't as loose or open as I could have been. So I take responsibility for everything I didn't do as well, or my campaign didn't do as well.

In some alternate timeline Donald Trump could have been counted on to endorse "Gutsy Women" with a few tweets in response to this and her other appearances, likely associating "crooked Hillary" with some conspiracy theory perpetuated by QAnon followers on some message board, or InfoWars.

Not that Hillary and Chelsea need any help here: One day after its release, "Gutsy Women" sits at the top of Amazon's Best Sellers list — beaten only by Rachel Maddow's "Blowout" and Ta-Nehisi Coates'  novel "The Water Dancer."

"Gutsy Women" is likely to land on the New York Times bestseller list as well, although we may never know whether its popularity will be impacted by Hillary and Chelsea's multiple TV appearances. The common assumption is that the majority of voters have made up their minds already about the merits of these women and "Gutsy Women."

Fortunately, the authors are not campaigning for anything, and they're not endorsing any of the current Democrats contending for the party's nomination. But on their TV tour, they are stealthily lending whatever weight they can to tip the scales against the figure Clinton refers to on "CBS Sunday Morning" as "a corrupt human tornado," by way of uplifting great women. That may be the best subtweet of the week.