As we enter the final season of Sam Esmail and Rami Malek's USA drama, our reality is as dark as its fiction 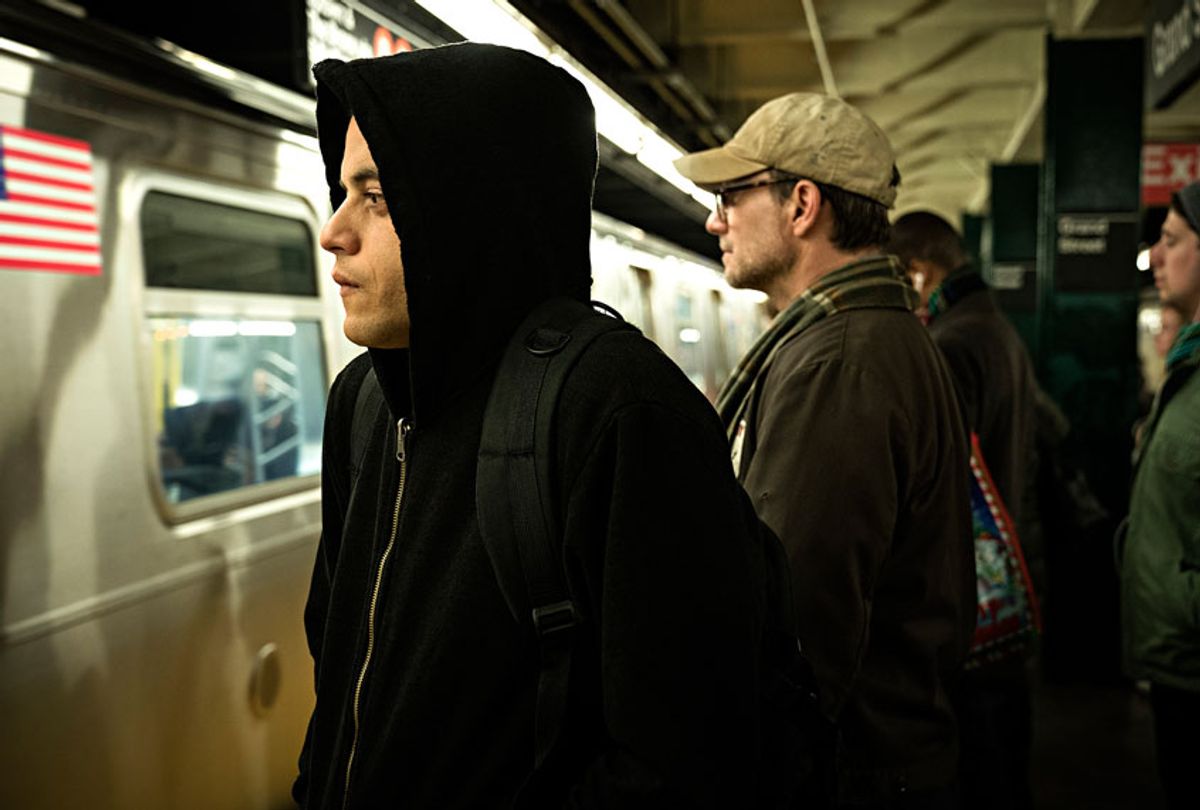 Juxtaposing cheery, upbeat music over tense or violent visuals is a time-honored technique in psychological thrillers, a succinct means of highlighting the extremity of a situation. Typically this manufactured dissonance between what we're seeing and what we're hearing is a single-use, blackly humorous flourish.

But the fourth and final season of “Mr. Robot” makes this stylistic clash a feature, not a bug, by setting the action in the heart of the holiday season.  In nearly every scene a carol or hap-happy song sung in major key lilts behind the frenzied action. Some tunes dance in the foreground as a partner to pulse-pounding chases and captures, or tearful conversations; in others, the melody is just loud enough to serve as wallpaper that doesn’t quite go with a bleak room.

The effect throws off everything a bit more than it already is in this sideways world of hacker anti-hero Elliot Alderson (Rami Malek), in which the viewer is his only friend. And it's another consciously inspired choice on the part of creator Sam Esmail to end Elliot's doomed mission in the season associated with long nights, unrelenting cold, and forced merriment, cosmetically enhanced by gaudy lighting and sentimental glitter that's otherwise worthless. It's an apt stage for a chilly ending that dangles the  promise of newness and redemption...if you believe in myth and buy into the false hope of holiday magic.

Two years have passed between the third season of “Mr. Robot” and the fourth, which kicks off Sunday at 10 p.m. on USA Network. That's IRL time we're talking about. In the drama's chronology, it's still 2015, and Elliot (Rami Malek), Darlene (Carly Chaikin) and Mr. Robot (Christian Slater) have only slogged through several months since the hack they hoped would wrest power out of the hands of conglomerates like E Corp, the show’s multi-headed super villain, and give it back to the people.

Instead, their actions only emboldened the company and the puppet masters behind it, led by Whiterose (B.D. Wong) and her fearsome The Dark Army. Elliot never was a conventional hero or met the pure definition of a white hat. But it is startling to witness a character to whom we were first introduced as a fearless, apparently all-powerful hacker operating to serve chaotic good reduced to prey and staying barely a few steps ahead of the jaws that would snap him in two.

The real world has starkly transformed since “Mr. Robot” was first introduced to us. Those opening episodes entranced us with its slick homages to cyberpunk classics such as “The Matrix” and the works of William Gibson and Phillip K. Dick, blended with the types of psychological twists abundant in the 1970s paranoid thrillers Esmail loves so well. Anyone could see that Elliot wasn’t quite right in the head, and he was upfront about that, sharing his diagnosis of social anxiety disorder from the jump.

Now, in our 2019 as in Elliot’s late 2015, the entire world suffers from that malady while his integration of multiple personalities — himself, and Mr. Robot — has kept him alive. Trump's reality has left us less paranoid than tired and expecting the worst. This also makes the “Mr. Robot” strain of paranoia stimulating in some regard. Then again,  the world has basically been trashed by Elliot and his group fsociety’s efforts to free it, and people are so exhausted and hungry for a return to normalcy that they’ll accept any structure handed to them that will make their lives easier. A viewer can relate...or she can choose to watch a comedy instead.

Reality and “Mr. Robot” have already met and crossed paths; we’re neck-deep into technology’s  promise to make our lives better, more streamlined and convenient for the low price of our privacy and control. “Mr. Robot” isn’t the first series to show our technological age for the dangerous grand illusion that it is and it won’t be the last.

But Esmail is one of the few series creators to expertly utilize classic analog cinematic techniques to make the conceptual oppression of surveillance state palpable. By placing the viewer inside scenes where the action is in the coding, and whether you understand the commands is irrelevant, he found a way to convey the idea that we’re all little more than ones and zeroes in a world built to run like a massive mainframe, programmed to benefit a precious few.

We've seen guys like Elliot at work in the form of our office I.T. colleagues;  we trust them to fix things and translate our needs and tasks into the machinery. By way of "Mr. Robot" and Esmail's direction,  maybe by the end of the series we'll come to understand that we've trusted all of this automation too much. Did you hear the one about the Iranians taking up where the Russians left off in terms of hacking Democratic presidential candidates and their associates? Do you still care? Can we even hope to do anything about it? Elliot doesn't have a clear or hopeful answer.

On a more positive note, students of cinematic technique should find much to puzzle over in Esmail’s vision. His fondness for god’s eye perspectives, using wide lens in small spaces, and framing scenes to place main characters off-center to telegraph how small they are against the system’s giants, still feel fresh and revolutionary. And his fondness for setting scenes on trains and buses, in transport stations, and on roads solidifies the depiction of the human world as one massive set of circuitry. Flesh as blood though we may be, we're also cogs.  There are comedies about that, too.

When both "Mr. Robot" and the audience lived in 2015, the fictional dystopia it presented felt heady and unconventional.  Now it looks like a dire day at the office. Because of this, I wonder whether the present-day viewer, once Elliot’s truest friend, is in the right frame of mind to stick with him to the end of this adventure.

By no means is this a knock on the quality of Esmail’s writing and directing in these last chapters or Malek’s work in it. The star won an Oscar for his work in "Bohemian Rhapsody" during his hiatus from "Mr. Robot"; his work in this series continues to prove that wasn't a fluke, nor was the Emmy he scored for playing Elliot.  And Esmail remains one of TV’s most intriguing storytellers for reasons on display here, as in his other work, the Amazon series “Homecoming." That is, he places us inside the headspace and passions of his characters in a way that breathes life and pumps adrenaline into cold code.

And yet, the fourth season episodes provided for review show “Mr. Robot” taking a conventional approach to landing the story. As far as one can tell with four out of the five opening episodes, no mind-blowing twists lurk ahead like previous ones that made curious viewers into evangelizing fans. That’s also probably for the best, since there aren’t many higher-voltage jolts Esmail can give the viewer beyond those revealing the depths of Elliot’s delusion that wouldn't feel necessary.

But these final episodes get dark even by the show’s standards, and extraordinarily quickly. Nobody who is familiar with “Mr. Robot” should be expecting sunshine and lollipops at the end of this road. However, the moment that Esmail establishes the level of ruthlessness Elliot, Darlene, and their few remaining allies are up against, there will indubitably be a few people who will ask themselves if they want to sign up for a weekly hour of fictional grimness in the midst of an increasingly grim reality. We get it.

Maybe the music will help. Maybe not. It still has an important role to play.

Since Season 1, the song choices in “Mr. Robot”’ have revealed more about Elliot’s emotional state than what he tells us —especially in those 2015 episodes, when the drama first broke the USA Network mold by countering everything about its blue skies programming aesthetic. Elliot’s world is rendered in a palette of muddy tones, and Malek absorbs those sullen colors like a sponge, his haunted, hollow eyes reflecting their bleakness right back at us.

But Elliot’s outlook could never bleed the color from the tunes the show’s music supervisor placed in his head and ours, tweaking our emotional wiring to help us better appreciate the extent of its hero’s psychological damage.

Christmas challenges that dynamic, at the best of times. The holidays in New York City evoke everything to rail against for the viewer – false cheer, mindless consumerism, a willful blindness to the evil running roughshod over the world. But in these final episodes, Elliot is tapped out, nearing the end of his tether. He’s not even really treating the viewer like his omnipresent friend anymore – he barely talks to us at all, in fact.

This opens the conversation to other perspectives – Mr. Robot’s, and other unexpected protagonists too. Endgames make strange bedfellows it seems. More prominent, however, is the reminder that the world keeps stumbling forward despite impending disasters Elliot thrusts himself and us into, ones intentionally hidden from a public that refuses to see them.

At one point Elliot laments that people have nearly forgotten the “5/9” hack, an amnesia enabled by E Corp’s handy replacement of the national currency with its own coin, complete with deals and discounts to keep customers happy and the population indebted to them. It’s only a problem if we choose to notice it, if we aren’t hypnotized by the colorful lights and holiday glee, and the joyful melodies played just loud enough to drown out the apprehensive drone of doom.