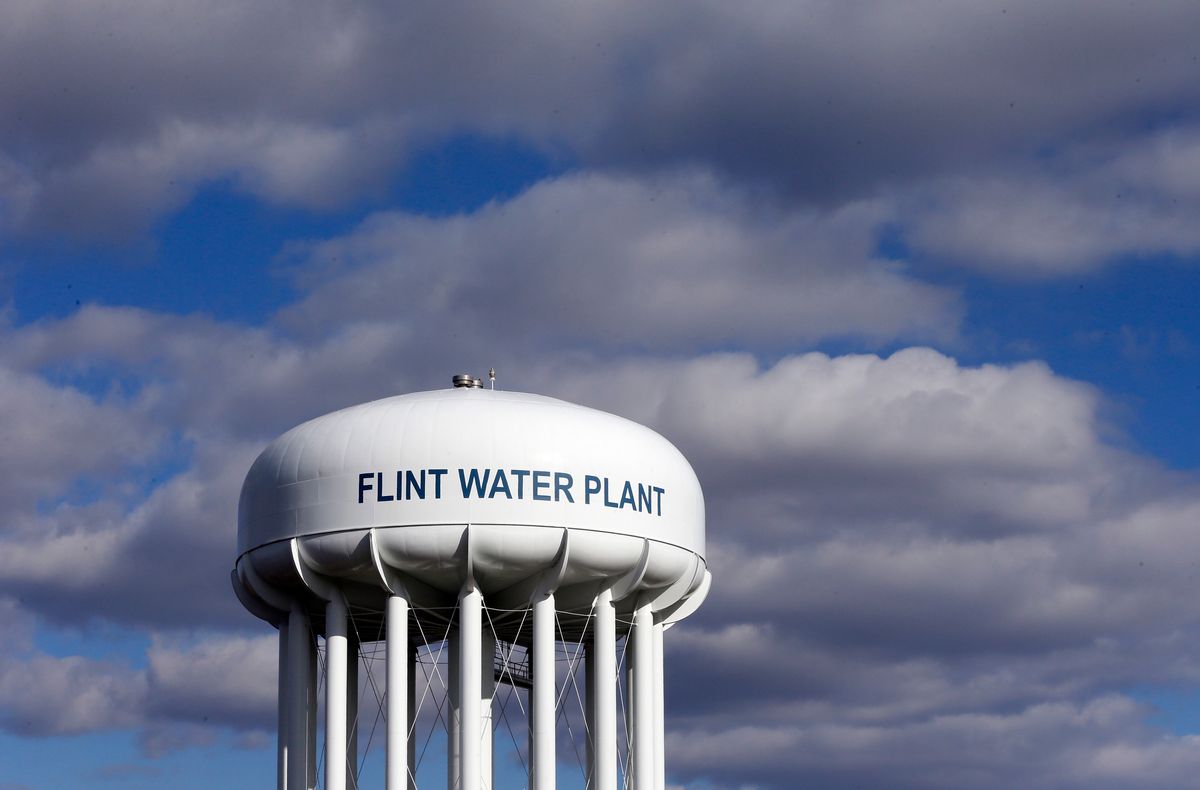 FILE - In this March 21, 2016 file photo, the Flint Water Plant water tower is seen in Flint, Mich. The Trump administration would slash programs aimed at slowing climate change and improving water safety and air quality, while eliminating thousands of jobs, according to a draft of the Environmental Protection Agency budget proposal obtained by the Associated Press. (AP Photo/Carlos Osorio, File) (AP)
--

A rural water district in a northern Nebraska county that voted for Trump in the 2016 presidential election had to resort to setting up a gofundme account when a flood wiped out running water to half of the county for six months.

Rancher Rex Black, the president of the Boyd County Rural Water District, hopes FEMA eventually reimburses the district 75% of the $1.7 million to $1.8 million cost to run a new water pipe under the Niobrara River and other expenses. The district got a no-interest loan from the state revolving loan fund, and Black’s wife and daughter set up a gofundme account which helped raise more than $300,000 toward the cost of repairs.

“They told me it will be four to five years out,” said Black who voted for Trump. “I sure hope it comes through because it will be hard on our little water district if it doesn’t.”

A FEMA spokesman said the agency is compiling information about the project.

Residents of Spencer, Lynch, Anoka and about 450 farms and ranches in Boyd County relied on bottled water to drink after a dam on the Niobrara River failed in March, washing away the district’s water main. Much of the county went without running water they could drink until September.

Trump’s FEMA would rather spend our nation’s taxpayer dollars on forcing would-be immigrants to stay in Mexico instead of paying for disaster relief like Nebraska flooding or helping Puerto Rico recover from Hurricane Maria.

The Department of Homeland Security, now run by Kevin McAleenan, the acting secretary, told Congress that FEMA transferred $155 million from FEMA’s disaster relief fund to ICE to pay for temporary courts for asylum seekers along the border. The money will help ICE detain almost 50,000 immigrant children and adults at a time.

DHS told Congress it was transferring the money instead of asking Congress for permission because under McAleenan, the department believes it has the authority to move the money after Congress didn’t fund more ICE detention beds in June.

Our nation’s drinking water system needs an estimated $473 billion over the next two decades to improve pipelines and how the water is treated and stored. Most of the investment has been by cities, counties and states.

“We are in a national crisis,” said water consultant Robert Bowcock.

In May, Trump walked out of an Oval Office meeting with House Speaker Nancy Pelosi and Senate Minority Leader Chuck Schumer where they were supposed to talk about a proposed $2 trillion plan for water projects, repairing roads and bridges, and other infrastructure improvements.

Boyd County has fewer than 2,000 residents. The county is older and poorer than the national average with a per capita income of about $26,000 a year. Trump carried the county with more than 85% of the vote.

In March, the 92-year-old Spencer Dam failed during the bomb cyclone that inundated much of the Midwest. The water district provided water for showering, washing and toilets from three refurbished irrigation wells and distributed free bottles of drinking water.