The whales in the Bay Area are especially vulnerable during Fleet Week. 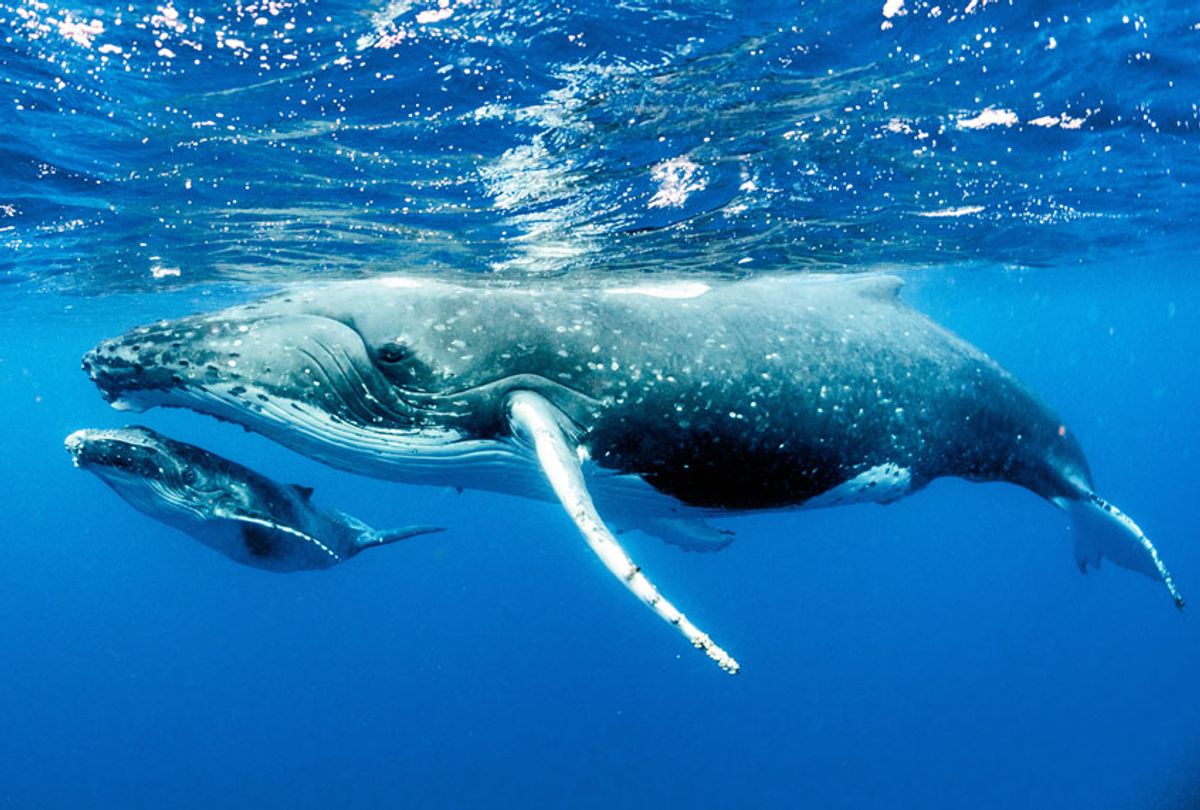 Most major American cities are annual hosts to "Fleet Week," a sort of military pageant in which military vehicles, mostly jets and boats, parade through the city's harbors and skies. Yet in liberal San Francisco, such spectacles are publicly polarizing for obvious reasons relating to their celebration of militarism.  This year, the chorus of Fleet Week concerns is joined by an unlikely voice in marine life advocates.

Indeed, marine researchers in the Bay Area are concerned the increased ship traffic stemming from Fleet Week will harm the region's vulnerable population of humpback whales. As of Friday afternoon, researchers at The Marine Mammal Center spotted two humpback whales, a cetacean stock they believe breeds in Baja and migrates north, swimming under the Golden Gate Bridge.

Humpback whales lingering, feeding, and breaching under the Golden Gate Bridge is a new phenomenon. In 2012, researchers photographed humpbacks outside of the Golden Gate strait. In 2015, they documented them swimming closer to the bridge. In April 2016, humpback whales started to swim under the bridge and into the San Francisco Bay. Since then, they have witnessed more whales pay a visit and for longer — sometimes 15 at a time in the Bay. This is because they “follow the food,” Dr. Tim Markowitz, a Research Associate at The Marine Mammal Center’s Cetacean Field Research Program, told Salon. Humpbacks filter feed on tiny crustaceans like krill and small fish like anchovies.

“It says a lot about the health of the San Francisco Bay,” Markowitz said. “Ecologically, we are doing well, they go where the food is, a lot of that is the good news, but the downside is they are living, feeding, foraging, they are doing a lot of diving, and they are doing this in an urban environment.”

In 2016, the National Marine Fisheries Service removed 10 distinct populations of humpback from the Endangered Species List. Commercial whaling has hurt humpback whale populations, but most populations have been able to recover, with the exception of four populations, including the ones who breed in Mexico and visit the San Francisco Bay. Currently, these humpbacks are still considered threatened — and one of their biggest threats are vessel strikes and entanglements.

Markowitz said in the San Francisco Bay Area, ship strikes have increased over the last two years. Last year, two of the six whales killed by ship strikes in the Bay Area were humpback whales. Markowitz explained that noise pollution caused by passing ships is a problem, too. Studies have shown that loud noises can hinder the sea creatures’ ability to communicate and find prey.

Ship traffic across the West Coast is a problem for these humpback whales. In 2016, at least 54 humpback whales were found tangled up in fishing gear. According to a study in 2017, an estimated 22 humpback whales die each year after being hit by ships off the coasts of  California, Oregon and Washington.

“Mortality from collisions with vessels is one of the main human causes of death for large whales,” the researchers wrote. “Ship strikes are rarely witnessed and the distribution of strike risk and estimates of mortality remain uncertain at best.”

As Markowitz explained, it is hard to know how many humpbacks die because they happen offshore, and often humpback carcasses don’t wash to shore. For autopsies on intact carcasses, researchers determine the cause of death by conducting a necropsy, which isn’t always feasible.

Last week, the National Marine Fisheries Service proposed a new rule that would designate nearly 175,000 square nautical miles in the Pacific Ocean as critical habitat for the threatened humpback whales. The proposed rule came after the Center for Biological Diversity filed a lawsuit against the federal government for failing to protect three Pacific Ocean humpback populations listed as endangered and threatened under the Endangered Species Act.

Catherine Kilduff, an attorney at the Center for Biological Diversity, told Salon under the Trump administration, these humpbacks are especially vulnerable.

“Historically, some administrations are more hostile than others, but the Trump administration is the most hostile and they have repeatedly been trying to undermine the Endangered Species Act,” Kilduff said. “A critical habitat designation puts these animals on a route to a healthy population.”

Kilduff said that is the rule is approved next year, it could prevent a large piece of infrastructure like an offshore drilling rig from being built. However, it does not protect humpbacks from private cargo ships traffic.

“As we have since time immemorial, the indigenous people of coastal California hold a sacred ancestral responsibility to care for our ocean relatives. Their well-being is deeply tied to our own,” Alicia Cordero, First Nations program officer at Wishtoyo Foundation, said in a media statement. “Ensuring the identification of humpback whale critical habitat is an essential step in meeting our cultural mandates and maintaining our traditional lifeways.”

Angela Somma, chief of the endangered species division at NOAA Fisheries, told Salon there is often a misconception about what a critical habitat designation means.

“It is not a no-go zone, the regulatory impact applies only to the U.S. government  agencies, they have a duty once an area is formally designated to ensure any action they take does adversely impact that population of the area,” she said. “If a company was to install a pipeline, it would require a federal permit, so we would have to evaluate that action, if it would destroy or modify that habitat, and we look at it on a case by case basis.”

Back in the San Francisco Bay, Markowitz said ships can choose to voluntarily slow down when there are humpbacks in the Bay.

“There is a huge difference in mortality rates between 15 knots and 10 knots,”  Markowitz said. “There is a drop, 90 percent, in the probability of mortality.”