Unlike "Fast Color," "Raising Dion" may be an industry underdog tale where the little guy wins

Netflix's show about a boy with superpowers isn't from Marvel or DC, and may be why you didn't hear about it earlie 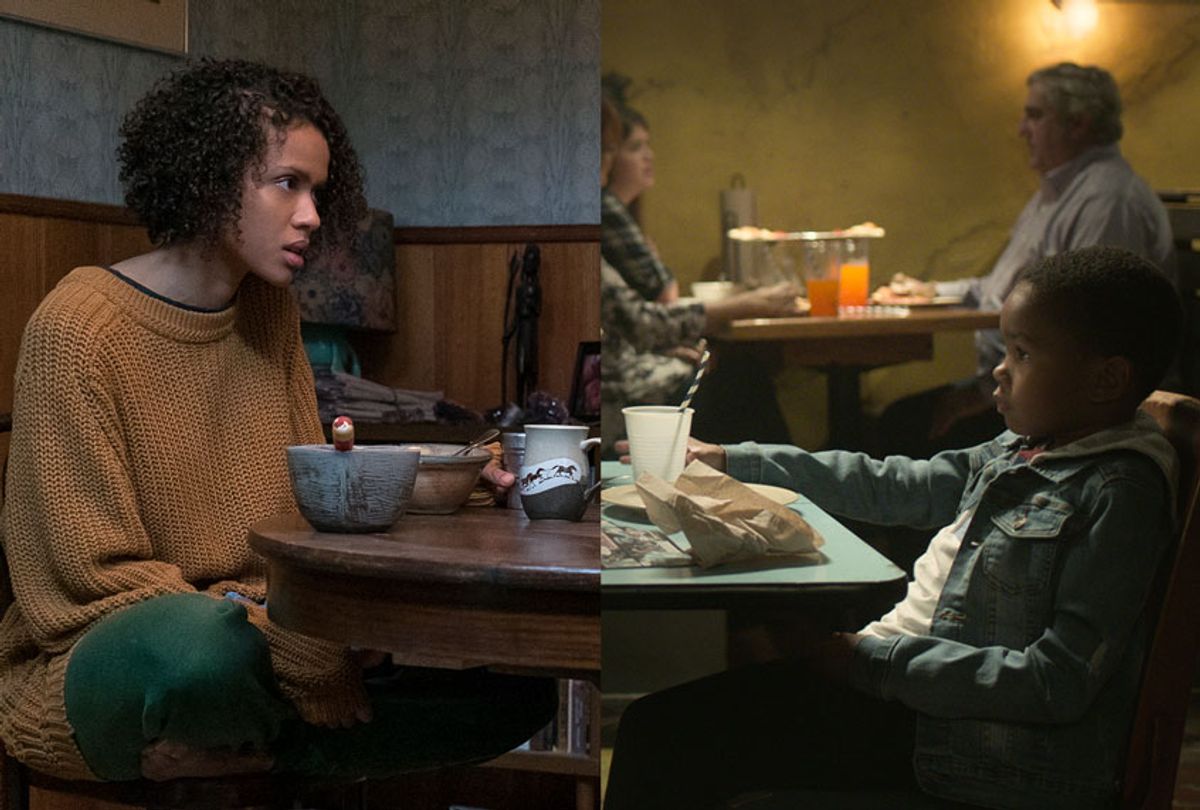 Dion Warren is a precocious 7-year-old who loves action figures, hungers for friendship, and doesn’t quite fit in at his new school, no matter how hard he tries. He’s the light of his mother Nicole’s life, and Nicole would move the Earth for Dion. She doesn’t possess the ability to actually do that, of course. But as it turns out, he does.

Contending with the onset of superpowers – telekinesis first, others shortly after – is yet another challenge mother and son deal with in “Raising Dion,” a new series that debuted on Netflix on Oct. 4. Nicole is raising Dion on her own following the sudden death of her husband Mark, who is lost in a New Orleans storm a year before the events of the series take place.

If you haven’t heard of “Raising Dion,” that may be because it is not a Marvel or a D.C. title. It isn’t led by widely recognizable stars, either. Dion is played by relative newcomer Ja’Siah Young, with Alisha Wainwright as Dion’s mother Nicole.

Jason Ritter, as Dion’s doting godfather Pat, is the show’s second-most famous co-star; executive producer Michael B. Jordan shows up only sporadically as Dion’s father Mark, mainly there in flashback and memory.

There’s also the matter of the drama’s point of view: the story may be about Dion, but it’s really an origin story about Nicole, the single black mother raising him. From the drama’s opening moments it’s apparent that Nicole and Dion haven’t had the time or psychological space to fully come to terms with the loss of Mark.

Wrangling Dion by herself makes it difficult if not impossible for Nicole to keep a job, even before they both discover he can make his cereal float.

Filmmaker and comic book creator Dennis Liu originated the title as a live-action trailer and comic book in 2015, releasing the short film to promote the comic and witnessing both go viral. And this unconventional premise is right there in the pitch, on the page where you can download the comic:

The subtext of “Raising Dion,” however, is that Nicole does have abilities – only ones that the rest of the world takes for granted. While Dion struggles to understand and control his powers, Nicole desperately strives to pay the rent and put food on the table.

“Raising Dion” is an all-ages appropriate family series, with storylines built to appeal to parents as well as their kids. And the series depicts Nicole striving to maintain her sanity while she come to grips with the realization that her son can make fish rise out of lakes and float in the air, and inadvertently cause sturdy trees to bend low, even break.

This would place him in peril in any circumstance, but adding to the dangers in store for her tender-aged son is that he is a black boy in America, and executive producer Carol Barbee, who writes the nine-episode series, shows what this means concisely and early on.

A white classmate incites a scuffle by taking something of Dion’s, but it is Dion who is punished for the incident by the school’s white principal, a moment that mirrors real statistics. Barbee includes a plethora of such messages in her script, adding in vital commentary about respecting boundaries and ableism, and granting a layered, central role to Dion’s best friend Esmerelda (Sammi Haney, who steals the show). She’s another grade-school outcast who claims the power of invisibility owing to being wheelchair-bound.

But it also resembles a show one would expect to encounter on the Disney Channel or perhaps a broadcast network during family hour, one of the main critiques raised in the mixed praise it has received from critics, which isn’t surprising due its presentation and the platform streaming it. Those expecting a whiff of thematic complexity in the writing are sure to be disappointed.

People wondering why the story focuses as much on Nicole’s travails as it does on Dion aren’t going to love it. Its virtually star-free casting pretty much ensures that “Raising” wouldn’t receive a weekly berth or even a pickup on a major network. Again, remember – it’s not a Marvel or DC property.

Moms and dads desiring something different from the saccharine pabulum that passes as “safe” viewing for kids, and shy about trying out supposedly family-oriented series that lean heavily on effects-enabled violence, seem to have connected with “Raising Dion,” and that’s likely what Netflix was betting on.

The service picked up Liu’s story to series in 2017, one of those happy and increasingly rare stories of an independent filmmaker succeeding in a marketplace dominated by blockbuster franchises such as the X-Men, Batman and the Avengers. Until recently, even Netflix had a piece of the Marvel universe in the form of its “Defenders” series – “Luke Cage,” “Iron Fist,” “Daredevil” and “Jessica Jones,” and its related “Punisher” series.

We may claim to have reached superhero saturation, but they’re still big business. And yet, getting back to the part about title awareness, there was not the level of widespread pre-launch hype that the likes of “The Punisher” or those other Marvel titles received prior to their launch. Netflix released trailers and stills for “Raising Dion,” as it does for many of its new shows, but most of the awareness for this series has been accomplished via online word of mouth.

To be fully transparent here, originally I was to take Netflix to task for this, especially in the wake of how miserable the road was for “Fast Color,” another non-brand name superhero fable released last May in just over two dozen theaters around the exact same time as “Avengers: Endgame.”

But inadvertently, perhaps, the fact that “Raising Dion” is somehow holding its own atop Netflix’s jukebox system might tell the industry something, and save future titles unaffiliated with Disney (owners of Marvel) and Warner (which owns the DC film and TV universe) the ignominy of having to prove there’s an audience for it.

The three superhumans in “Fast Color,” played by Lorraine Toussaint, Gugu Mbatha-Raw and Saniyya Sidney, are black women representing three generations in a family where powers are passed down matrilineally. The world they subsist in is dying – rain has disappeared, and drought has devastated the land. Water is the most expensive resource around, and fear abounds – which is why this grandmother, mother, and daughter that can deconstruct matter with their minds have chosen to remain in hiding.

Although it may have been possible for “Fast Color” to ride the “Avengers” momentum, I suspect the fact that it is an origin story that, like “Raising Dion,” lacks explosive demonstrations of power and happens to feature people of color who aren’t from Wakanda has something do with the fact that it barely showed in theaters.

“There were women and people of color at every company that loved the movie — some men and some white men,” Hart continued. “At the end of the day, when it got to the white male gatekeeper — time and time again — they said, ‘I don’t know who this movie is for. I don’t know how to market it.’”

Months later, perhaps this small Netflix show can stand as proof that there is an audience for these kinds of stories. Netflix doesn’t release its viewership data to the public – at least, not without a publicity purpose, and not data that is verified by a third-party service such as Nielsen.

However, in the week following its premiere “Raising Dion” began showing up in the service’s “Popular on Netflix” promotional row – for what that’s worth. (That designation doesn’t necessarily tell a user what’s popular on the service overall, but what’s popular among viewers who have similar tastes in movies and TV shows.)

A better indicator may be the online percolation on sites with tools that measure awareness via user interest. For example, although user ratings systems on sites like Rotten Tomatoes and IMDb are more reliable PR tools than anything else, consider that “Raising Dion” shot up 514 slots on IMDb’s MovieMeter rankings, which is powered by monitoring user search.

At the time of this story’s publication, it was ranked at No. 93 – higher than “Ballers,” which stars Dwayne Johnson and concludes on Sunday, and “Riverdale,” and only three slots lower than “Killing Eve.”

These numbers aren’t perfect, flawless evidence of success, but they amount to some kind of validation. And they’re important to note in order for future filmmakers and writers creating stories centered upon protagonists that don’t fit the conventional hero or savior mold, i.e. white males.

This has long been the case; in a recent conversation with Kal Penn, he recalled that when “Harold and Kumar Go to White Castle” came out, the studio suits doubted that audiences would pay to see a stoner comedy starring two Asian American leads. When it hit the box office, he says, it tanked because it wasn’t marketed properly.

“Then it comes out on DVD and like coast to coast, people are buying it,” Penn said. “The numbers are peaking in Oklahoma and Kansas and Iowa, places where you wouldn't expect, or at least we were trained not to expect that we would have fans. And it was so empowering to prove those guys wrong. Because at some point as a comedian or as an artist, you have faith that if you're telling universal stories and you want to make people laugh, that audiences will gravitate towards that.”

The same can be true of superhero stories. Reportedly there was trepidation about whether “Wonder Woman” would find an audience because it starred a female superhero in the central role, and it broke records. Director Patty Jenkins revealed that the studio apparently wanted to cut the famous No Man’s Land scene; she fought for it to stay in, and now it is iconic. The film’s sequel is due next year and expected to be a hit – the studio started hyping it a year before its release.

If “Raising Dion” receives a second season, maybe it will get a similar marketing push as titles like “Stranger Things” and shows that Netflix recently brought to New York Comic Con; oddly, this one was not among the ones paneled. In any case, at least it has found a home and an audience in an entertainment world that has historically undersold or dismissed titles like it. And who doesn’t love a good underdog story?