Can dogs predict when earthquakes will happen? 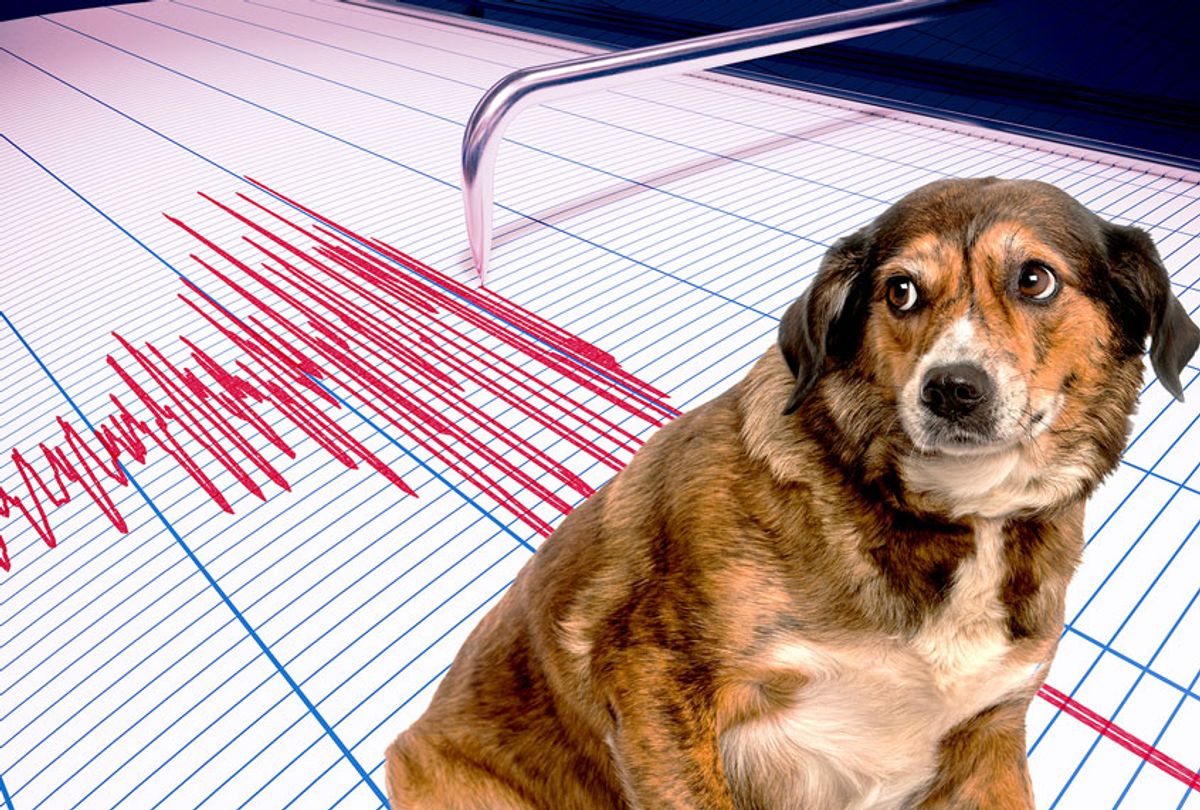 Californians often refer to fall as “earthquake season.” But there's no science to support that; earthquakes can occur at any time of the year, day or night.

Nevertheless, Thursday, Oct. 17 marked the 30th anniversary of the 1989 Loma Prieta earthquake, a particularly violent temblor that registered a 6.9 on the Richter scale. Now, whether it is because of the perceived earthquake season or mere coincidence, people have been on high alert for any little tremor. Thus, it was appropriate timing when a 4.5 magnitude earthquake jolted the East Bay on Monday night just before the anniversary, and another 3.7 quake rattled the Los Angeles area on Friday morning, mere hours after the anniversary.

This meant “earthquake Twitter” was in full swing this week, sharing stories about a shaky few seconds of terror — and about their dogs acting strangely beforehand.

“In east la on my side, coyotes and dogs outside were barked frantically before earthquake,” one Twitter user posted. “Then earthquake happened and then they went quiet.”

“It’s crazy how dogs sense shit like earthquakes,” another Twitter user reported. “This dude started to bark then i s**t you not 5 seconds passed and BOOM, earthquake.”

There have long been reports of animals acting strangely before earthquakes  – as if they knew when one would hit – dating back to an earthquake in Greece in 373 BCE. But is there any science to back it up, especially when it comes to dogs?

In 2011, Japanese researchers launched a study to investigate dog behavior after a 9.0 magnitude earthquake hit the Pacific Coast of Tohoku in Japan. According to the study, 236 of 1,259 dog owners said they observed strange behaviors, such as neediness, barking, and howling before the quake. Some said their dogs were so restless they even escaped. Sixty percent of these reports happened in the seconds and minutes before the earthquake.

According to the United States Geological Survey (USGS), unusual animal behavior can be linked to their ability to notice the smaller seismic compressional waves, known as P waves, which very few humans notice. Instead, it's the shear wave, aka S wave, that people usually feel during an earthquake.

“But many animals with more keen senses are able to feel the P wave seconds before the S wave arrives,” the USGS states on its website. “As for sensing an impending earthquake days or weeks before it occurs, that's a different story.”

Indeed, more research needs to be done on the topic. Last year, a paper published in the Bulletin of the Seismological Society of America suggested that most "evidence" cannot be tested rigorously.

"The animals may sense seismic waves – it could P, S, or surface waves – generated by foreshocks," Heiko Woith, one of the authors of the paper, said via Science Daily. "Another option could be secondary effects triggered by the foreshocks, like changes in groundwater or release of gases from the ground which might be sensed by the animals."

The problem is that to scientifically prove dogs can predict when an earthquake is coming, long-term observations are needed. Considering the unpredictable nature of an earthquake, that would be difficult to achieve.

"What we're faced with is a lot of anecdotes," Andy Michael, a geophysicist at USGS, told National Geographic. "Animals react to so many things — being hungry, defending their territories, mating, predators — so it's hard to have a controlled study to get that advanced warning signal."

Even as stories have been shared this week about past and present earthquakes, the myth of dogs and their ability to predict quakes remains unproven. Perhaps we will know more when the next big one hits in the San Francisco Bay Area, which USGS officials say is inevitable.

“We at the state and federal USGS fully expect the Hayward fault to go again sometime in the future, and for there to be another big earthquake,” Tim McCrink, Supervising Engineering Geologist at the California Geological Survey, told me in an interview last year.

In the meantime, whether it's earthquake season or not, and whether one owns dogs or not, it's best to be prepared for any tremor, no matter what size. Because one thing we do know about earthquakes is that they're unpredictable.