Why Michael Moore's "Bowling for Columbine" matters now more than ever

Great satirical films hold up over time. Their messages keep resonating because the flaws they diagnose persist 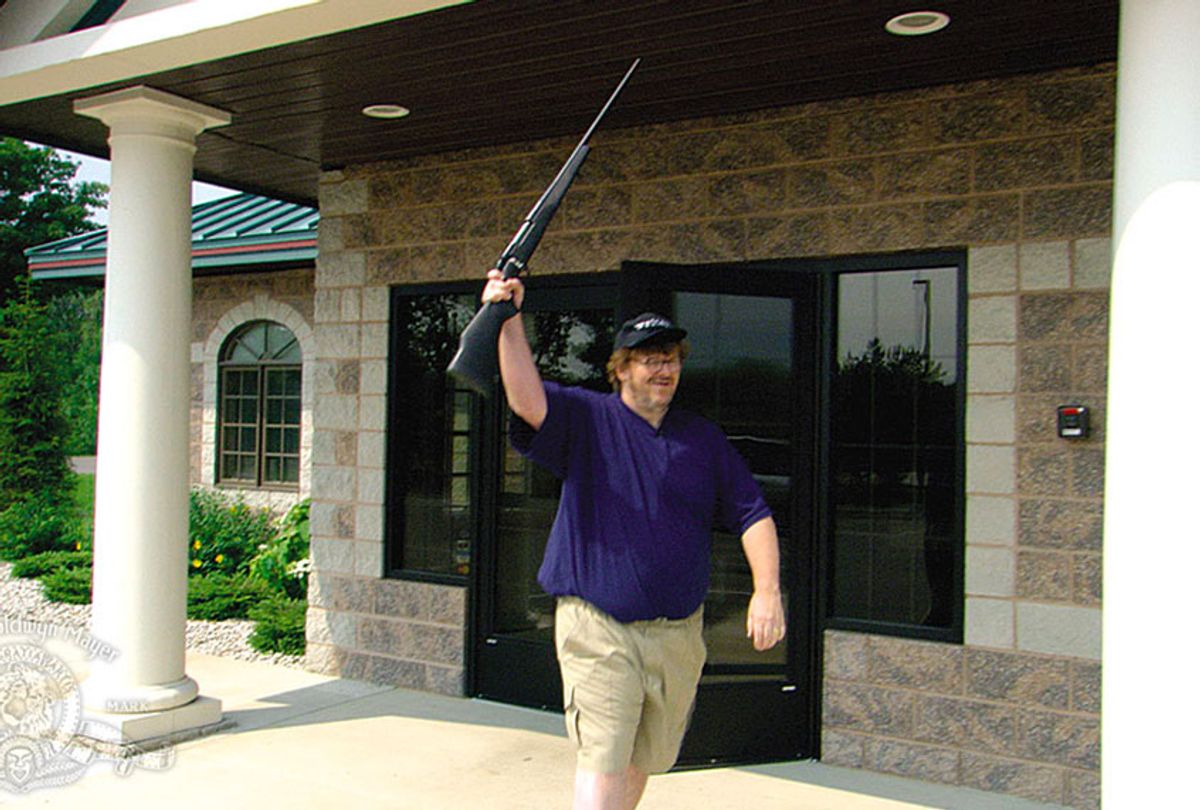 On Saturday, October 19 at 9 p.m. ET, MSNBC will air a special screening of Michael Moore’s Oscar-winning documentary “Bowling for Columbine,” followed by a live interview between Moore and Ari Melber, host of “The Beat.” Originally released in 2002, one year after the 9/11 attacks, the film explores the circumstances leading up to the 1999 Columbine High School massacre and the violent culture that fostered it.

The film is worth watching (or re-watching) for the simple fact that it drives home the painful reality that our nation has failed to act to reduce gun violence. As Moore explained in an interview preceding the special screening, “The day the Columbine shooting happened, that afternoon, my crew and I decided we have to do something about this. We have to make a documentary about this and we have to make sure that there is not another — I remember saying this that day — that there is never another school shooting. Sadly, now we are some 17 years later and there was more than one Columbine.”

In scene after scene, from a bank that hands out guns to a mom who thinks the only way to protect her kids is by being armed, the film digs into the disturbing ways that gun culture has been not just justified, but normalized in the United States. Moore conducts a series of interviews with a wide range of gun owners — militia members, suburban housewives, farmers and more — all of whom are happy explain that they only feel safe if they have weapons.

In Moore’s artful style of satire, he often lets his interviewee reveal the flaws in their own logic. After a Lockheed Martin executive explains that he thinks the problem at Columbine was anger management, Moore asks, “You don’t think our kids think to themselves, well gee, dad goes off to the factory every day and he builds missiles, these were weapons of mass destruction. What’s the difference between that mass destruction and the mass destruction over at Columbine High School?” When the executive responds that he doesn’t see the connection, he makes Moore’s ironic point for him. At other times, he gently asks a reasonable question that underscores irrational, illogical, or incomprehensible actions: After he gets a gun from a Michigan bank handing them out to new customers, he asks, “Do you think it’s a little dangerous handing out guns in a bank?”

Great films hold up over time. They are worth watching for the art of their style, for their messages, and for the ways that they remind us of their context. Satirical films also help us think through moments when society was caught up in habits and behaviors that were profoundly irrational, destructive or delusional. Their messages continue to resonate because the flaws they diagnose persist. Stanley Kubrick’s 1964 film “Dr. Strangelove, Or How I l Learned to Stop Worrying and Love the Bomb,” for example, continues to offer poignant commentary on toxic military masculinity.

“Bowling for Columbine” is worth screening today for all of those reasons.

But now, 17 years later, the film has another message. Watching the film today it becomes abundantly clear that our problem isn’t gun culture; the problem is that we have failed to do anything about it. Every message and every argument about the problems of U.S. gun culture appear in the film. They are all there.

But there’s more. The film also points out the ways that we would rather freak out over crime than pollution, even though pollution is far more dangerous to us. In another scene, Moore interviews one of the creators of the “Cops” reality TV series and asks why the show couldn’t focus on corporate crime. Why, Moore asks, couldn’t the show feature the real criminals in our society, the ones who are destroying the economic security of major segments of the population? The answer Moore gets is both hilarious and disturbing.

Ultimately, Moore zeroes in on how the culture of fear in the United States is the one component of U.S. society that distinguishes it from other nations. Canadians, for example, have guns, but they have less gun violence. So, the problem in the United States is not the guns per se; it is the fear-based culture that wants them.

Scenes in this film play differently today. The moment when Moore interviews then-NRA President Charlton Heston and pushes him on why he appeared at an NRA rally in the Columbine community when they were still deep in grief falls harder now.  It is not just the specific ways in which the NRA has become more aggressive since Heston was at the helm; it is also the reality that the interview had tough consequences for Moore himself.  Moore received death threats, including two from Clint Eastwood, in response to that scene.

Perhaps the most chilling moment in the film that screens differently today takes place in the first hour when Moore interviews a suburban man who shows him various ways that a house can be protected from intruders. After showing Moore a safe room and explaining how it works, the man then shifts gears and tells Moore that “Columbine changed how we talk.” With tears in his eyes, he explains that there was “something overwhelming about that kind of viciousness, that kind of indiscriminate killing.”

But, as we screen this film 17 years later when the events of Columbine are more commonplace than ever, the film forces us to wonder if there really was “something overwhelming” about Columbine after all. Because if there were, why haven’t these shootings stopped? Why are they worse? And why has there been such inertia over this crisis?  Moore, who has been a strong supporter of the Parkland students who organized March for Our Lives in the wake of the Marjory Stoneman Douglas High School shooting, is not giving up the fight.

And that, perhaps, is the last new lesson of the film. It is also a story of how a committed artist, intellectual and activist can continue to champion a cause after death threats and after public scorn. It is important to recall that in 2003 when Moore received the Academy Award for this film he used his acceptance speech to publicly condemn the War in Iraq, which had begun only days before. And, for that, he was booed, called an “asshole” and told his career was over.  The next week he began work on “Fahrenheit 9/11” — a film that broke box office records for a documentary while exposing the George W. Bush administration's abuses of power. Screening “Bowling for Columbine” today we now know that Moore’s career was far from over. It was only getting started.