Inside the world of spooky ASMR videos

A slow stabbing, a vampire bite, an autopsy – these are all role-play scenarios meant to relax you 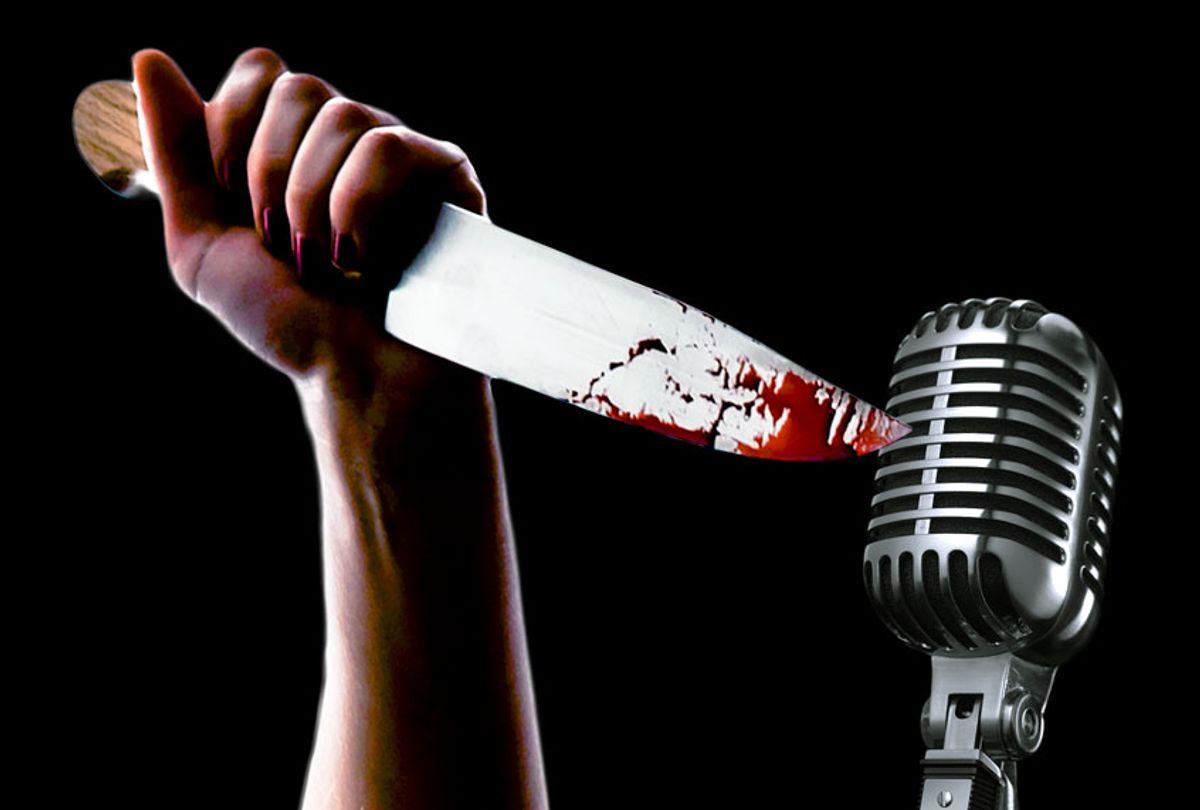 I don’t personally know YouTube ASMR host who calls herself Slight Sounds, 25, but for the next 26 minutes she will glow on my dark computer screen like friends and family often do when I’m on Facetime. There is a crinkling noise in the background as she turns the pages of a book, where my name is supposedly written down for our “appointment.” I can hear each page turn perfectly. She welcomes me with a whisper and perfectly enunciates her words. “So, you’re in today for a measuring, okay, and I’m going to have you sign a consent form, but you’re in to get measured to then get your blood sucked, is that correct?” she asks.

She explains that I’m letting a vampire suck my blood for money, which she jokes is a “creative” way to make a profit. I agree. “OK, I’m just going to gently wipe you down, now just close your eyes,” she whispers, as she proceeds to wipe the camera lens in a circular motion with a scarf as if she were wiping my face. “Everything is looking very clean, very usable, so you don’t have to be worried about any of that.” She continues to wipe.

There is no consent form to sign, no real vampire to suck my blood, and no live interaction with Slight, who goes by her YouTube name for privacy reasons,. In fact, what feels like a very personal interaction, is not personal at all. She would never know if I’m actually closing my eyes or how I answer her questions. Nearly 1.5 million people have watched this same video on YouTube—and not because this is some throwback to "Twilight" fandom, but because people want to feel brain tingles, like the feeling one might experience in response to certain sounds or a light touch.

Slight’s video is one in a growing niche genre of dark-themed autonomous sensory meridian response (ASMR) role-play videos on YouTube. The idea is to take the popular triggers that may cause people to feel brain tingles — such as whispering, tapping, crinkling, brushing, and plucking— but add dark themes. These can include getting your blood sucked by a vampire, which is a relatively playful scenario when compared to what other ASMRtists, YouTube creators who make ASMR videos, do in the dark-themed arena.

Some ASMRtists cross the line of being just plain morbid. There is a slow stabbing in which you are slowly stabbed to sleep, an ASMR autopsy where the ASMRtist looks like she is moving your organs around for 43 minutes to determine your cause of death. Then there is the ASMR Mortician who assists you in preparing you for your funeral. There’s one where you can be a victim of a serial killer, if that’s your jam too. Slight’s YouTube channel, which is called Slight Sounds ASMR, is a mix of traditional ASMR videos with traditional direct triggers, but her most viewed one is the vampire video.

Are these dark-themed ASMR videos meant to shift the experience from innocent and feel-good to horror-film scary, accelerating the heart rate? Craig Richard, a professor of physiology at Shenandoah University in Virginia and founder of ASMR University, told Salon no.

“As long as the role-play fits the core formula, a kind person providing personal attention while making gentle sounds and movements, then it is still likely that the role-play can trigger ASMR,” Richard said. “This has resulted in a lot of creative ASMR videos that include aliens, vampires, and even soft-spoken serial killers.”

ASMR videos have become a cornerstone feature on YouTube. Videos of people playing with slime, carving soap, tapping, and even pretending to be your boyfriend, are all part of it. ASMRtists rack up millions of views, but up until 2010, ASMR wasn't even referred to as ASMR. Instead, it was referred to as "Weird Sensation Feels Good.” Today, ASMR isn't in the dictionary, but Merriam-Webster added the term to its Words We're Watching list this year. Indeed, the rise of ASMR runs parallel to the internet, and we probably yet to see what it will fully become. What is certain, at least in this moment, is that ASMRtists follow a “core formula,” Richard explained.

“According to core formula for almost all ASMR videos, it's a kind person providing personal attention while speaking softly and/or making gentle sounds and movements,” Richard said. “As long as this core formula is adhered to, then there are almost endless creative options to the role-plays and sounds for each video.”

Richard said while actions like whispering, tapping, and crinkling are often mentioned as ASMR triggers, it is context that ultimately causes the ASMR triggers. It is hard to imagine how dark-themed role-play and soap carving can exist in the same realm and achieving the same outcome, but Richard says they all provide the same valuable offering: personal attention.

“Although a slime-poking video just seems to be someone's hands manipulating slime, it is still personal attention because they are doing it directly and personally for you,” Richard explained, adding it’s like having someone in front of you showing you how to set a watch or solve a Rubik's cube. “You would be looking at their hands doing something for the benefit of teaching you, helping you, and, or, entertaining you.”

The hands, Richard said, provide the viewer with “a positive, personal moment.”

Indeed, Slight said she decided to do a tape measuring vampire role-play for the sake of being creative, not dark.

“I wanted to do a tape measuring video, which is really popular in the ASMR community. There is something about the personal attention and the silence of looking at a tape measure, and I wanted to incorporate that, but I didn’t want to do something I have seen a lot, like wearing a suit and doing a doctor role-play,” Slight told Salon in an interview. “And I had always wanted to dress up as a vampire, so I decided it would be a little spooky and a little alluring.”

While many comments on the video are about people feeling attracted to Slight, many comments are about feeling relaxed and watching it multiple times in a row to feel the tingles. “This video calms me down so much I've watched it like 5 times,” one user wrote.

ASMR videos have health benefits that have mostly only been reported anecdotally, although some scientific studies are suggesting they are true. One study found that watching ASMR videos can decrease your heart rate. In various surveys, people report they watch the videos to feel less stressed and reduce anxiety. Slight, before becoming an ASMRtist, watched ASMR videos because they helped her feel less anxious.

“I have always had anxiety, I’ve had racing thoughts, loneliness, depression, and I think finding a community where I felt safe and comfortable really drew me in,” she said. “It was a place where the whole objective is just to relax you.”

The neuroscience behind ASMR is still being investigated by researchers. Richard and a few researchers published the findings of a brain scan study of 10 people while watching ASMR videos. In the study titled, “An fMRI investigation of the neural correlates underlying the ASMR,” participants had their brains scanned by a functional magnetic resonance imaging (fMRI) during moments when they reported brain tingles from watching ASMR videos. Those brain images were compared to moments without brain tingling. They found that the regions of the brain that were strongly activated during the tingles were similar to regions that are activated when humans, and other animals, engage in soothing social behaviors. Interestingly, the insula, supplementary motor areas, and dorsal anterior cingulate cortex, were also activated,  which have been found to be activated when humans feel empathy.

However, not all people feel the tingles after watching an ASMR video.

As more ASMRtists turn to darker-themed role-plays, Slight agrees with Richard's assessment about their appeal.

“It comes back to personal attention and being taken care of, and I find it fascinating that even if the attention is coming from a so-called kidnapper, there's still something about the viewer and content creator’s personal attention that makes people feel at ease,” she said.