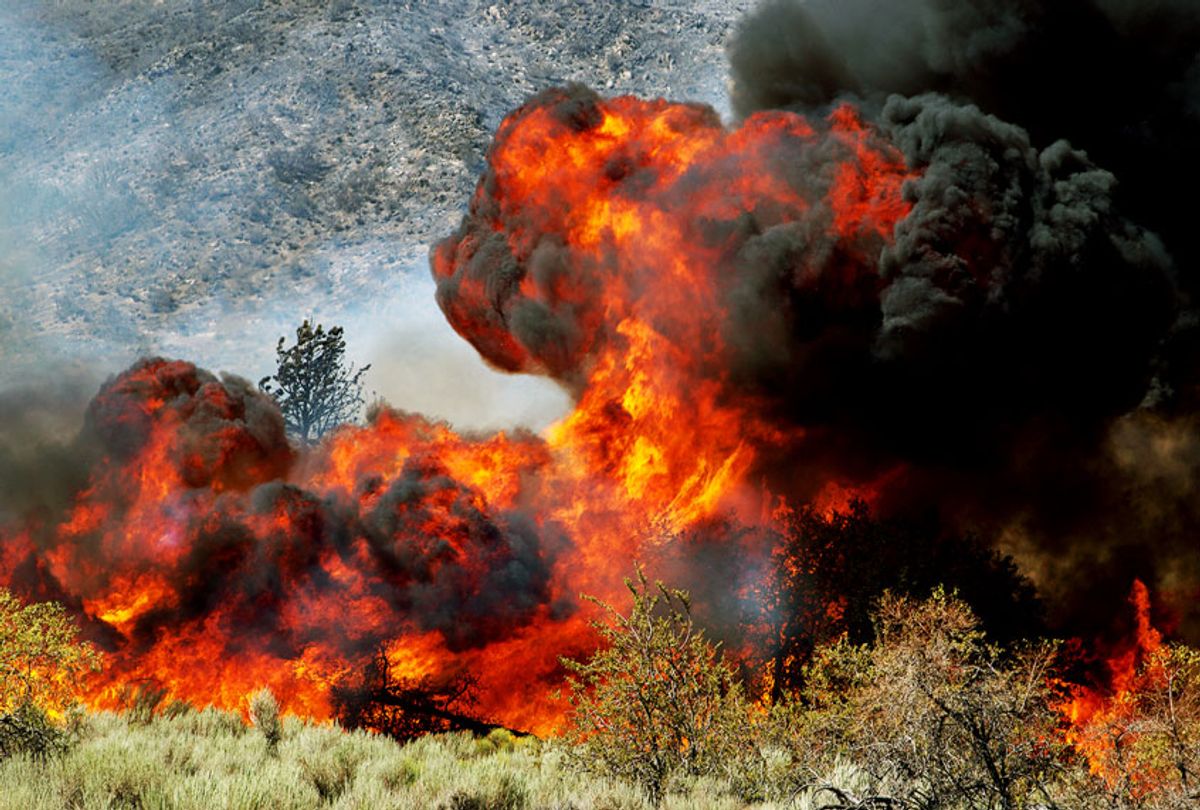 The Getty Fire. The Kincade Fire. The Tick Fire. The Burris Fire. This is only a partial list of the wildfires raging across California. On Monday evening, firefighters continued to work tirelessly to control multiple, massive fires, both new and ongoing, across the state.

In Los Angeles, the Getty fire continued to cause mandatory widespread evacuations near the Getty Center, an area known for its celebrity-filled population and high-value homes. In the north, the Kincade Fire in Sonoma County shows no sign of waning as it inches toward Santa Rosa, has nearly doubled in size, and has resulted in the evacuation of nearly 200,000 people, the largest evacuation in the region. It almost doesn't feel like hyperbole when newscasters declare that “California is on fire."

Wildfires are nothing new to the West Coast. They have two seasons in which they are expected to occur each year: the summer season, when hot temperatures dry out vegetation providing fuel, and the fall fire season, when hot, dry winds blow over dried out vegetation. Research shows both seasons have become more frequent and more intense over the last 50 years. The past decade has seen some of the state’s largest and most destructive fires. As the trend continues, the implications for human health, infrastructure, and ecosystem management worsen too. While the effects, at the surface, appear to be isolated to the state of California, the impact of more tense wildfires could extend beyond the golden state, too.

When wildfires occur, burning trees release pollutants and gases into the atmosphere, one of which is known as “black carbon.” Black carbon is a component of fine particulate matter (PM ≤ 2.5), which is formed through an incomplete combustion and is emitted through both human-related activities, like diesel fuel, and natural occurrences like wildfires.

As explained by the Center for Climate and Energy Solutions, Black carbon is one of the main drivers of climate change, possible second to carbon dioxide. Black carbon’s primary sources come from diesel engines, cook stoves, wood burning ... and wildfires.

“Reducing CO2 emissions is essential to avert the worst impacts of future climate change, but CO2 has such a long atmospheric lifetime that it will take several decades for CO2 concentrations to begin to stabilize after emissions reductions begin,” the Center for Climate and Energy Solutions explains. “In contrast, BC remains in the atmosphere for only a few weeks, so cutting its emissions would immediately reduce the rate of warming, particularly in the rapidly changing Arctic.”

While the effects of black carbon in the atmosphere are still being studied, some researchers have explained that when it does ascend through the atmosphere, mixes with clouds, and falls falls on ice and snow, it inhibits their brightness which results in less sunlight bouncing back to space. In other words, it can lead to more global warming. More recently, a study on smoke in the stratosphere found that Canadian wildfires sent smoke into the stratosphere that was detectable by satellites for more than eight months. “The smoke rose to altitudes between 12 and 23 kilometers within 2 months owing to solar heating of black carbon,” the researchers of the study stated.

While black carbon is not the only concern when it comes to wildfire smoke, concerns have been raised around how California’s severe wildfires are impacting the state’s overall carbon emissions. In 2018, the carbon emissions released from California wildfires were about 68 million tons — which is about the same amount of carbon emissions that are produced to provide electricity to the state in a year.

However, climate experts say that we are in a fire-prone region, and it isn’t fair to say that wildfires will cancel out the state’s efforts to reduce emissions as there are challenges in developing the estimates of greenhouse gases (GHGs) from a wildfires.

“A big one is the fact that wildfire has always been part of the natural forest ecosystem, which means that over time, the forest carbon released in a wildfire is eventually re-sequestered by the trees and foliage that grow up to replace what burned,” Dave Clegern, a Public Information Officer for California Air Resources Board, told Salon. “So separating what would be ‘excess’ emissions from what would occur naturally is one challenge.”

As trees are dying at unprecedented rates, and wildfires are destroying more land than before, it does pose a problem for the natural process of reducing carbon emissions since trees suck up carbon dioxide. The planet’s ability to regulate carbon emissions will be out of whack. As a NASA study stated, if carbon levels continue to increase, forests won’t be able to maintain “a healthy balance between the carbon dioxide that's released and the carbon that is stored.” Wildfires will then just make the matter worse.