How humans kicked off the Pyrocene, a new "age of fire" 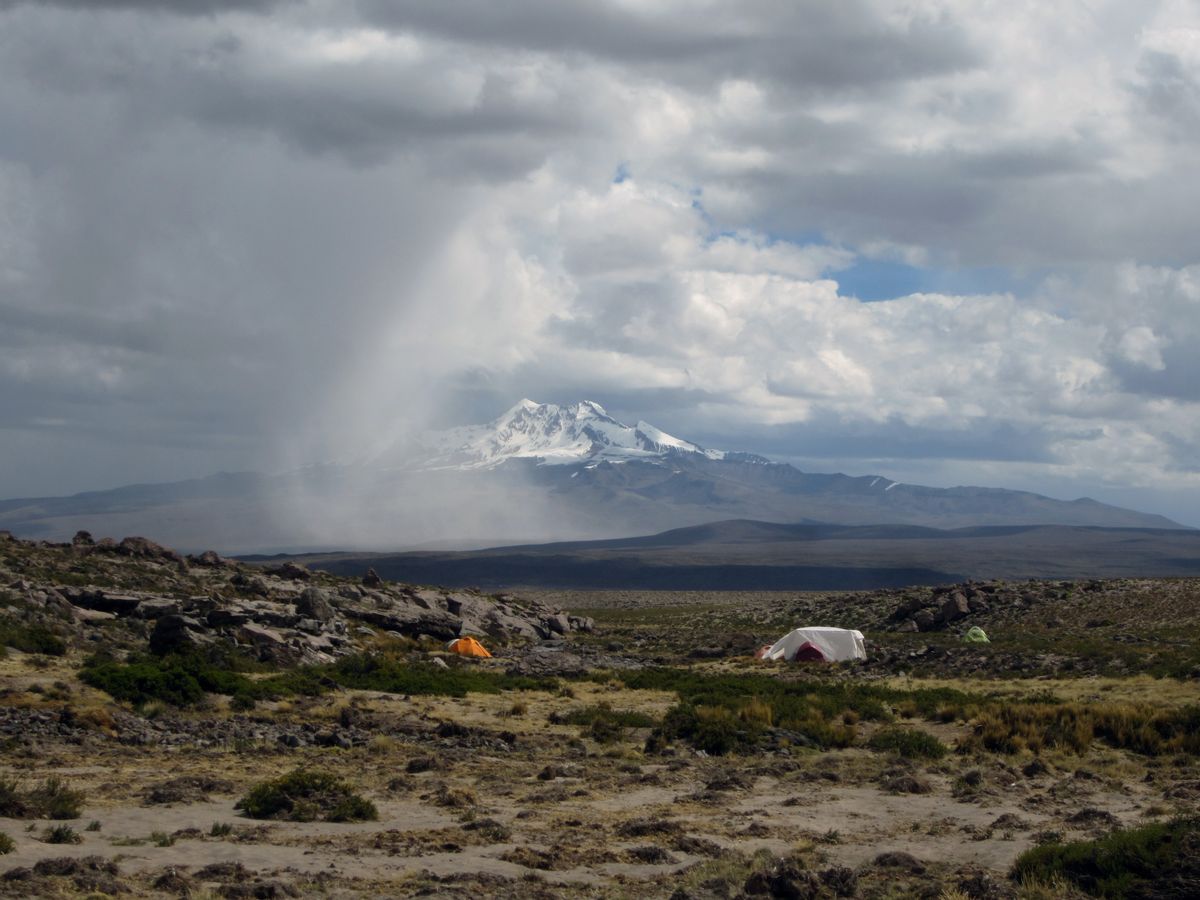 This undated image provided by journal Science shows a campsite in Pucuncho Basin. Stone tools and other artifacts have revealed the presence of hunter-gatherers at about 14,700 feet above sea level, between 12,000 and 12,500 years ago in the Peruvian Andes. (AP Photo/Science, Matthew Koehler) (AP)
--

The Amazon, Alaska, and of course California — more of the world is going up in flames, and with climate change, that progression shows no sign of stopping. Are we reckoning with a new age of fire? Is this the Pyrocene?

The word was coined in 2015 by Stephen Pyne, an emeritus professor at Arizona State University’s School of Life Sciences and the author of nearly 30 books about the history of fire. At first, it was just “a catchphrase,” Pyne said. But since then, he has started to take it more seriously. The way Pyne sees it, humans have left their mark on the planet with fire. First for clearing landscapes for hunting and gathering, now for powering our cars and homes and gadgets.

“We went to the top of the food chain because we learned to cook landscapes,” Pyne wrote in an essay. “Now we have become a geological force because we have begun to cook the planet.”

This “fire age” is reshaping our planet much like the last ice age carved out our rivers and lakes. “Mass extinctions, changes in sea level, large changes in vegetation and the arrangement of plants and animals — it kind of looks like the equivalent of a fire age,” he said.

There’s already a catchphrase for the geological epoch shaped by human activity. It’s called the “Anthropocene,” and it’s pretty controversial. Geologists disagree about when the epoch started (one group of researchers tasked with figuring out such things proposed 1945, the year the U.S. dropped the first atomic bombs) or whether the category should even exist. After all, in the grand scheme of Earth’s history, human civilization is but a blip.

Pyne doesn’t have a problem with the Anthropocene idea, but he thinks the Pyrocene offers a new frame for understanding our relationship to the overheating planet. The term has recently sparked some interest, gracing headlines and panel talks, and Pyne is starting to work on a book about the concept.

He envisions the Pyrocene (and the Anthropocene — they’re synonymous) stretching back to the beginning of the Holocene after the last ice age nearly 12,000 years ago. “The environmental power source behind the Anthropocene has been our control over fire,” he said. And he’s not just talking about cooking food or burning forests, though those are certainly part of it. He’s also talking about combustion — you know, burning fossil fuels.

“Almost all the things we do in the environment at some point involve fire, not necessarily directly, but as a catalyst,” Pyne said. “If you took fire out of the technology chain, you wouldn’t have much left.”

He’s especially interested in the moments when fossil fuels and landscape fires interact — like in 2016, when the wildfires tore through Canada’s Fort McMurray, a community set up to support the mining of tar-sands oil, a particularly nasty fossil fuel. Or more recently in California, where aging power lines and electrical equipment from the state’s largest power utility, PG&E, have sparked more than 1,500 wildfires over the past six years.

“Here are these two worlds, these two lines of fire, if you will, intersecting in lethal ways,” Pyne said. “The Pyrocene seemed to me a way to try and capture the way they interact.”

Since the end of the last ice age, Pyne said, we’ve driven ice further and further back with fire, with catastrophic consequences. Our glaciers are disappearing. The sea is rising and swallowing homes.

Pyne takes the long view when it comes to humanity’s relationship with Earth and fire. He points out that we’re still in an interglacial period (the time between ice ages) and someday far in the future, the ice is bound to creep back up. When that day comes, perhaps all of our antics with fire could stave off another ice age.

But on the other hand, if we don’t stop this binge-burning of fossil fuels soon, humans might find it hard to survive in a hothouse Earth.