Mothers and monsters: On writing through the terror of parenthood

"I don’t understand how a mother could write a book like that," my neighbor told me. How could I not? 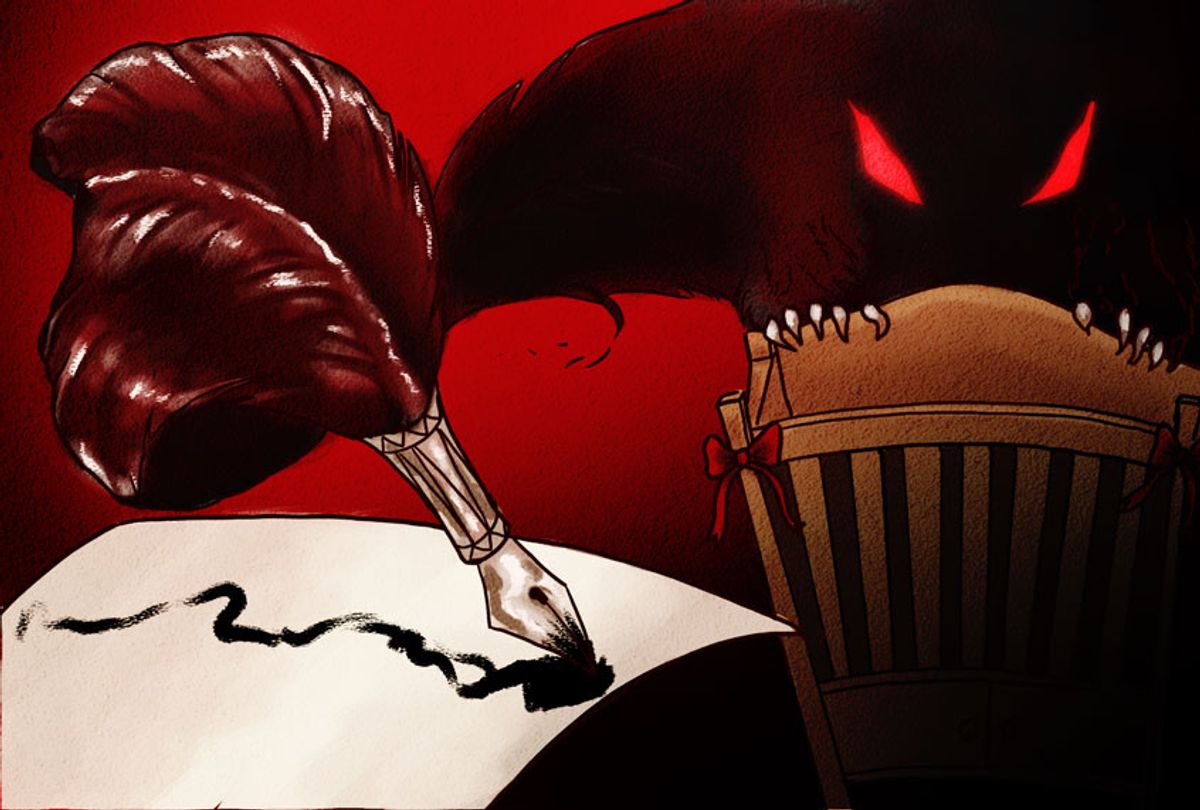 About a month after my first novel, a domestic thriller titled "Rapid Falls" came out, my neighbor stopped me on the street.

“I just finished your book,” she said.

“That’s great,” I replied, hoping for a positive review.

Instead, suspicion flickered in her eyes as she regarded me. In the lengthening silence, I began to feel odd and possibly dangerous. Finally, she spoke.

“I don’t understand how a mother could write a book like that.”

I was stunned. I didn’t want to start an argument with a woman who gives my kids treats on Halloween so I changed the subject. In that moment, I chose to let my book speak for me but in the months that passed, the conversation kept coming back to me demanding an answer.

So here it is.

I don’t know how anyone but a mother could write a book like that. Having two children has given me many gifts: wonder at the warmth of their flat hand on my cheek, astonishment at the depth of my love, and a daily struggle to find patience in a sea of babbling demands. But it has also brought a dark desperation, especially in the early days, as I grappled with the unlearned and unceasing duty of keeping my babies alive. Sleep deprivation and terror at my inability to care for a helpless creature gave rise to waking terrors: demons behind doors and monsters relentlessly searching for an unlocked window. I have always had nightmares. Often, I am woken by creaks or bumps in the night and spend hours twitching at the slightest hint of noise with fear buzzing through my veins like caffeine. But I have never been more gripped by fear than I was the first night of my daughter’s life. Motherhood doesn’t exclude me from writing the way I do. If anything, it is my strongest qualification.

Here is a snippet from my resume. My daughter was born at 8:35 a.m. at home with the assistance of two midwives who stayed with us to help me learn to feed her. It was challenging but I wasn’t scared. Not until they left. In the gathering darkness, something changed. My husband and my mother, both of whom had been awake for most of the labor the night before went to bed. I was alone, with my fragile newborn baby in my arms. Dawn was hours away.

Outside of her bedroom window, there was a large tree. In the sunshine, it was beautiful. In the black of night, its spindly branches cast shadows of clawed fingers on the wall moving up and down as if impatient for its prize. I felt the presence of something biding its time as it taunted us both by darting toward me forward and back.

But the fear of what lurked in the corner, twitching toward me, wouldn’t leave my body. I became convinced that my baby was starving to death. She was sucking and sucking and crying and crying. I called my midwife in between the shrieks which were like a saw to my soul. The issue was colostrum: the early fluid that must be dispersed before a mother’s milk comes in. The only solution to our problem seemed impossible.

My daughter had to eat. And I had to feed her. Or she was going to die.

She survived. My daughter is nearly seven now and her brother is almost four. Both of them have gotten through numerous heart-stopping moments with me and though making a million lunches and wiping a billion noses has dulled the knife of panic that was present that night, it’s still here, in my heart. It comes creeping up again when I lay in bed at night and think about the way my son almost fell into the deep end of the pool or the sound of my daughter’s cough as they catch in her throat.

Without a way to channel that terror, I would go insane. So, I write. I drafted my first novel in the first six weeks of my son’s life, balancing him on a nursing pillow clipped around my body like a cigarette girl’s tray. My first book features a mother who does terrible things. My second is about a mother trapped by her own trauma. I wrote the two women the way they needed to be written: raw, troubled and deepened, not diminished, by their decision to have children.

I am not alone in constructing women whose lives were both darkened and lightened by motherhood. In many recent works, I have been relieved and comforted by a wealth of characters who were exactly like the women I spoke to on the playground, their eyes dancing with panic as they noted how little sleep we had had for days, for weeks, for years. Mothers filled with fear and anxiety, compromised by their sheer exhaustion and unrelenting terror, and made vicious by the burden they must protect. Mothers like me.

Ruth Ware’s third novel, "The Lying Game," opens with Isa Wilde being forced to make a frantic trip with her newborn baby. Each manic thought racing through her head as she schleps her small daughter from bus to train, sweating and fretting about the wisdom of her decision and the danger she is forcing upon her child, could have been a transcript of my own mind in the first year of my daughter’s life. Ware’s creation of a narrator in the throes of early motherhood who is beholden to obligations from her past as a woman without children developed a delicious tension which would have been impossible to render using different circumstances. Every plot point in the unbelievably fraught world of the novel relies on the internal collision of the main character’s new responsibilities and old allegiances. From inciting incident to the striking climax, Ware skillfully manipulates the guilt and obligation felt by her main character into the web of suspense to make mothering an integral component to the scary story. Without Isa’s baby, the story would be as flat and lifeless as David Bowie kidnapping a teddy bear instead of an infant in the legendary "Labyrinth."

Speaking of baby snatching, the inciting incident in the "The Couple Next Door" by Shari Lapena features just that. A mother is reluctantly coaxed into attending a small dinner party at the house next door. The proximity between her house and the one in which the party will be held allows her to forgo a babysitter and rely on only a baby monitor to keep her child safe. Over the course of the dinner, Lapena masterfully details the very same fears that I had when leaving my children for the pursuit of pleasure: the heady rush of independence weighed down by the burden of guilt in seeking it all doused by drink after drink of alcohol. My mouth was dry with sympathetic tension as the novel charges toward the inevitable moment of the parents returning home, drunk, cranky and unfulfilled by the evening’s party — only to check on their child and find nothing but an empty crib. Once again, without the child, there would be no fear, no tension, and no story.

If Ware and Lapena serve as examples of how to write stories that both encapsulate and embed motherhood, Shirley Jackson is a model of how to make a career of it. Jackson moved between works of horrifying fiction which often placed mothers at the center of the story and non-fiction autobiographical essays about her real life as the mother of four children. Though an early reviewer stated that the two types of her work were as different as “a thunderstorm from a zephyr” and readers in the early 1950s marveled at the way Jackson could write both monster stories and tales of motherhood, the fit between the two is highly understandable to me. In her fiction, Jackson was able to use her fiction as catharsis — a place to keep her anxiety and terror about being responsible and mostly alone with four children as a mid-century housewife — so that she could enjoy and transcribe the real-life events with gentle humor and joy. Writing fiction allowed her a place to talk freely about how genuinely dark motherhood can be without the judgement such statements might have inspired in her peers then — the same judgement I felt from my neighbor over fifty years after Jackson’s death.

It’s well past time to allow mothers to be creepy, dark and bleak. At times, our minds are full of monsters that need a place to escape. As Jackson once said, "I have never liked the theory that poltergeists only come into houses where there are children because I think it is simply too much for any one house to have both."

Amber Cowie is the author of the acclaimed debut novel "Rapid Falls" and the new release "Raven Lane." A graduate of the University of Victoria, she is also a mother of two, wife of one, and reader of many. She continues to write books that make her browser search history highly suspicious. For more information, visit her at www.ambercowie.com.