The best way to make Thanksgiving stuffing, according to so many tests

There's good stuffing — and then, there's the absolute best stuffing. 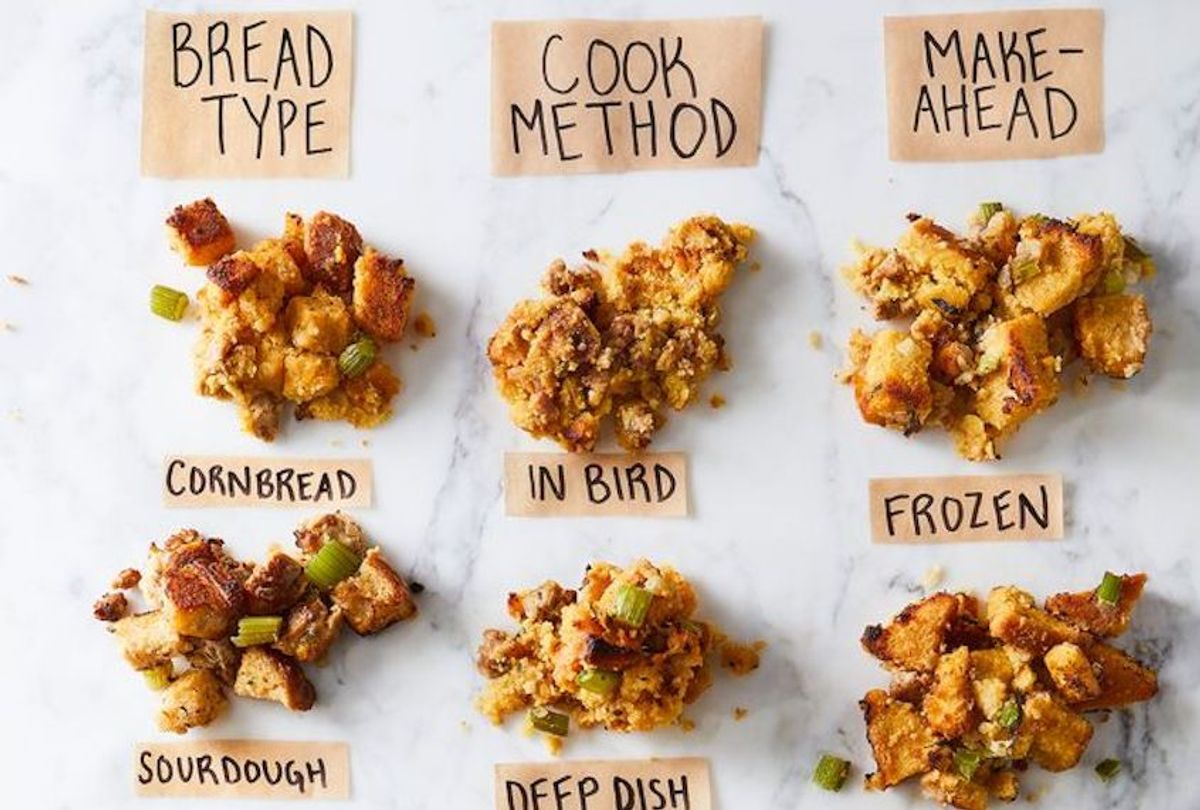 Ten years ago, my mother tried to mess with our family’s classic Thanksgiving menu. She billed it as “lighter” and “vegetable-forward” and “not a punishment, Ella, I promise.” On her blasphemous docket appeared swill like baked apples in place of pie, and puréed turnips in lieu of mashed potatoes. Most devastatingly, she suggested a ban on bacon in the stuffing.

“I’d rather eat hair,” replied my sister Zoe, by way of confirming she’d received the proposed menu. My dad read the list of dishes once, emitted a single, high-pitched shriek, and refused to come out of his room for hours.

“I think someone who lives on my dormitory floor has an extra seat at his Thanksgiving,” I wrote. “His aunt makes two kinds of pumpkin pie. I’ll see you guys at Christmas!”

Fortunately, my mother quickly relented, and we made a double batch of bacon stuffing. Our family remains intact to this day. (Thank god, since I was bluffing about that other invitation.)

We aren’t the only ones out there with strong feelings about stuffing, it would seem. Recently, when I asked my readers for pressing opinions (best bread? Ideal carb-to-liquid ratio? Unmissable mix-ins?), dozens wrote back, seemingly within seconds:

“MUSHROOMS DO NOT BELONG,” said another.

Which made stuffing both a necessary and extremely daunting subject for Absolute Best Tests. I put it through three rounds of trials: first, a head-to-head bread-type face-off; second, a series of cook-method appraisals; and third, a test of make-ahead protocols.

By the end, I expected I'd never want to look at a mound of it again. But honestly? I could eat stuffing again right now. Especially the kind with extra bacon.

There are truly as many recipes for stuffing — aka, dressing — as there are appropriate moments to eat its leftovers.

To simplify my tests, I experimented with a few different mix-ins before settling on a classic combination: crumbled and butter-browned sweet Italian sausage, sautéed yellow onion and celery, sage, and enough chicken broth to moisten—but not soak—each batch. (A few trappings that were this close to making the final cut included leeks, green onions, mushrooms, and finely diced Jimmy Nardello peppers.) Every batch was seasoned with kosher salt and freshly cracked black pepper, and bound with eggs.

Each contender loaf was whittled into bite-sized cubes and toasted before use—excluding the mix, which is already in gravel-sized pieces, and dry as any Thanksgiving small-talk. Trials were scored for overall ranking, as well as where they landed on the squishy-crispy spectrum (aka, the plush-to-crust range). For test rounds two and three, cook method and make-ahead protocol, I used cornbread based on the results of round one. And with that spoiler...

Overall Ranking
Of the bread trials, Herb Seasoned (Classic) stuffing mix ranked fourth, due to its low absorption of flavor and moisture. The resulting stuffing evoked crackers that had somehow been baked twice, plus some adornment.

The Squishy-Crispy Spectrum
The stuffing mix retained almost no moisture—perhaps it never really penetrated the bread-y pebbles to begin with, leading to more rapid evaporation—less than each of the cornbread, sourdough, and challah trials. It served as the crispy-side bookend on the squishy-crispy spectrum.

Keep In Mind
I used the Herb Seasoned version of Pepperidge Farm's mix offerings here, since I was already testing cornbread separately, but would caveat that Pepperidge Farm's cornbread mix has a much better flavor and aptitude for moisture absorption.

Overall Ranking
Sourdough tied with challah for a two/three spot. It lent the stuffing a wonderful tanginess, and despite its inherent chewiness as a bread, made for a surprisingly silky batch, thanks to a quick and thorough gulping down of the stock.

The Squishy-Crispy Spectrum
Sourdough retained more of its moisture than the mix and the cornbread, and less than the challah, putting it a little left of center on the squishy-crispy spectrum.

Keep In Mind
Trials with each of a firmer boule and a more cushiony loaf revealed that the sturdier model stood up better to the stock, and facilitated a crispier top crust. 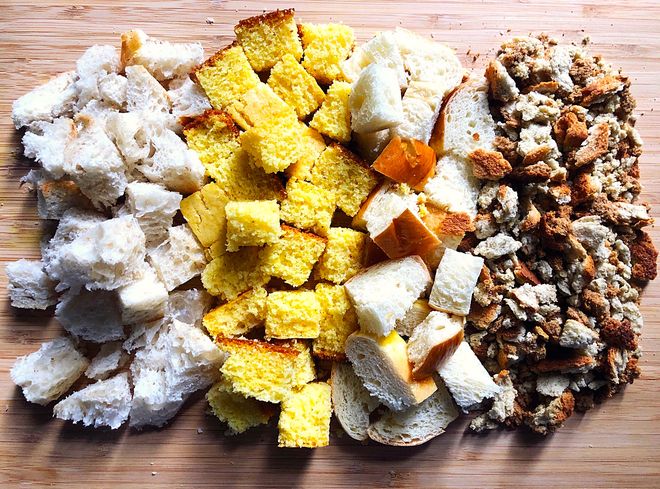 Overall Ranking
Challah tied with sourdough for a two/three spot. Where sourdough stuffing was silky-light, the challah test was all custard and velvet, like a particularly excellent bread pudding. (Its crumb somehow yielded an eggier stuffing than any other trial, despite a consistent ratio of egg-broth-bread across batches.) And, the challah imparted some welcome sweetness into the mix.

The Squishy-Crispy Spectrum
Challah retained more of its moisture than the mix, cornbread, and sourdough. Its top crust, while existent, was more of a delicate matter — putting it far left of center on the squishy-crispy spectrum.

Keep In Mind
For best results with a challah stuffing, flip its pieces so they're crust side down if you plan to finish the stuffing at a high temperature — swaths of its crust burned more readily than with other breads.

Overall Ranking
Cornbread ranked first, thanks to its agreeable capacity for just enough moisture retention below the surface with an extra-crispy top crust. And, even more so than the challah, its slight sweetness played perfectly with savory elements (looking at you, sausage and sage).

The Squishy-Crispy Spectrum
Cornbread retained more of its moisture than the Pepperidge Farm mix, and less than both the sourdough and challah, putting it firmly in the middle of the squishy-crispy spectrum.

Keep In Mind
I conducted tests with both a softer cornbread and a drier, denser loaf. The fluffier specimen crumbled into smaller pieces despite gentle mixing and absorbed the broth better, which produced a much more desirable batch of stuffing.

Overall Ranking
Sheet-pan stuffing—as in, a standard batch of cornbread stuffing packed into a shallow sheet pan and baked covered at 350 degrees Fahrenheit until warmed through, then briefly broiled till browned—ranked third among cook methods, due to its dryness and remote lack of any soft layer.

Keep In Mind
For those who live life with an all-crust, all-the-time mentality, this method would appeal.

Overall Ranking
Deep-dish stuffing — as in, a standard batch of cornbread stuffing packed about three inches deep into a high-sided dish, and baked covered at 350 degrees Fahrenheit until warmed through, then briefly broiled till browned—tied with the in-bird batch for a first/second ranking among cook methods. A deeper baking dish produced the ideal combination of a soft, fleecy stuffing below and enough surface area for a crispy top layer.

The Squishy-Crispy Spectrum
Dependably, firmly in the very middle.

Keep In Mind
I tested with an eight-by-eight inch dish, but a nine-by-thirteen inch, or even a deep pie dish would work here. 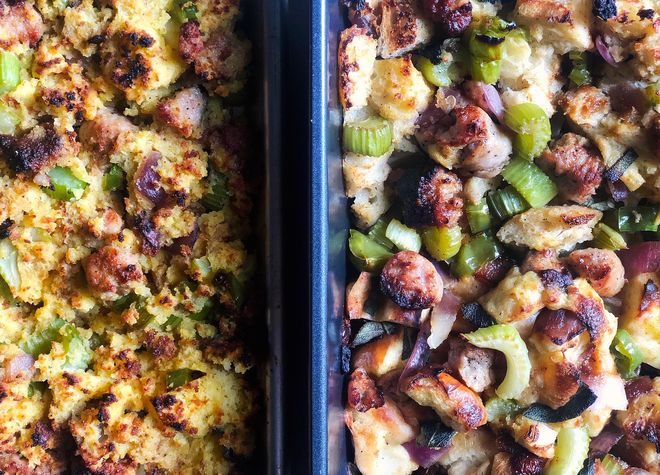 Like the Capulets and Montagues, but way lower stakes. Photo by Ella Quittner.

Overall Ranking
In-bird stuffing — as in, a standard batch of cornbread stuffing loosely packed into a bird, and baked until both the poultry and the stuffing reached 165 degrees Fahrenheit, for safety reasons—tied with the deep-dish batch for a first/second ranking among cook methods. Across all trials (bread-type round included), the in-bird stuffing had far-and-away the best flavor.

The Squishy-Crispy Spectrum
All squish, no crisp. (For crispness, the in-bird stuffing could've been packed post-cook into a dish and briefly broiled.)

Keep In Mind
The USDA would have me remind you that, "Cooking a home-stuffed turkey is riskier than cooking one not stuffed." The danger? That the stuffing itself wouldn't have reached 165 degrees Fahrenheit even when the thickest part of the turkey has, potentially resulting in food-borne illness (or, if you leave it in longer, an overcooked turkey).

Overall Ranking
The stuffing composed in advance, frozen, then baked straight from the freezer ranked second among make-ahead protocols. It was extremely wet, which created a soggy bottom layer that wasn't apparent in any other test (during this round or otherwise).

The Squishy-Crispy Spectrum
Mostly squish (plus a touch of sog), but with some top-crisp.

Overall Ranking
The stuffing composed in advance, frozen, then thawed overnight in the refrigerator before being baked was much better than the batch baked straight from the freezer. (Perhaps the thaw allowed the stuffing time to more thoroughly soak up liquid from the ice that formed in the freezer?) There was no discernible difference between this round and the cornbread stuffing baked fresh.

The Squishy-Crispy Spectrum
Firmly in the middle. 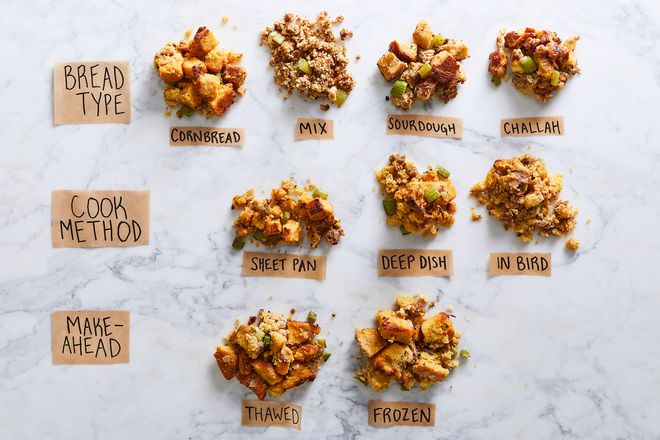 BREAD TYPE: If you're aiming for stuffing with a soft, plush texture beneath a crispy top crust — plus some light sweetness — cornbread's your best bet. Challah and sourdough are both excellent choices for a flavor riff, with the former leaning heavier and the latter leaning lighter.

COOK METHOD: A deep-dish bake-then-broil is ideal for texture, though if you're a flavor maximalist who's willing to overlook the USDA's advisories, cooking in-bird provides an extra boost.

MAKE-AHEAD PROTOCOL: And if you'd like to make your stuffing ahead, thaw from frozen before baking to avoid a soggy bottom.