The Emmy-winning Adult Swim series is back for Season 4, with changes teased by Dan Harmon and Justin Roiland 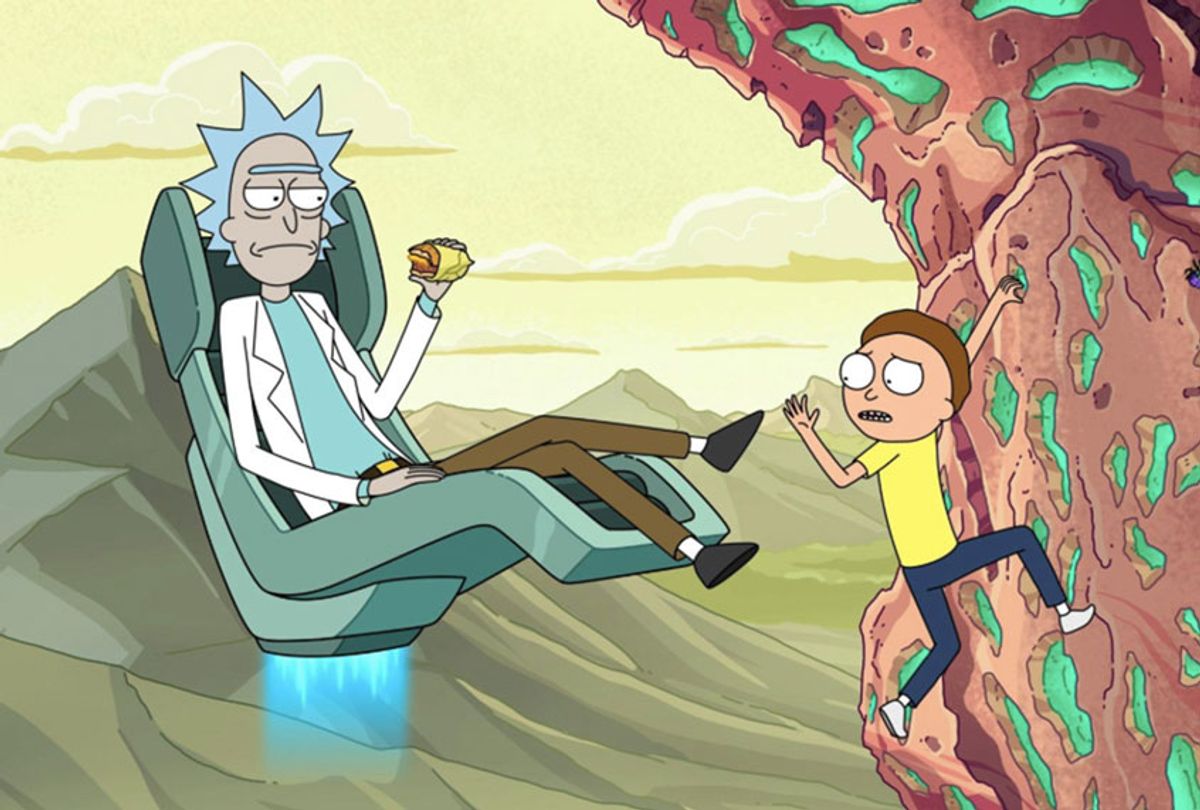 On October 1, 2017, “Rick and Morty” blew off America. This is the date the third season finale aired, an episode in which the President of the United States (voiced by Keith David) enlists Rick Sanchez and his grandson Morty Smith (each voiced by Justin Roiland) for a mission the pair believes to be beneath them. And to be honest, it is. The Leader of the Free World brings the smartest man in the known universe and his grandson to the White House to hunt down some kind of annoying pest.

Instead, using Rick’s inter-dimensional portal gun, they bounce around the planet solving world crises in a snap and giving the president credit in every instance. But the president knows they aren’t enacting these diplomatic triumphs in service of the greater good.  He sees Rick's display of benevolence for what it is: an elaborately staged act to show him up and, to paraphrase the POTUS, be a d**k about it.

This story captures the essence of who Rick Sanchez is and why "Rick and Morty" fans love hanging out with him more than Morty often does. He's a character who sees the random, topsy-turvy madness of the universe and shrugs, takes a slug of booze and dives right into the fray knowing he'll figure out a way to triumph. He has no Prime Directive to keep him in check nor even the Time Lord's benevolent devotion to justice and doing what's right.

That much is clear when the third season finale's plot deteriorates into an elaborate, violent battle that reveals the White House to be a cross between a Bond villain’s tricked-out lair, the X-Men's Danger Room, and Thunderdome. Fortunately the situation resolves well, unlike other messes Rick and Morty leave in their wake.

Good thing, too, since that finale marked the start of a two-year hiatus that very well could have been permanent. Adult Swim hadn’t announced a third season, and creators Dan Harmon and Roiland hadn’t communicated anything about the series continuing. Fortunately the network soon announced the order of 70 additional episodes – more than doubling the size of the series as a whole – to be aired over an undisclosed number of seasons.

The first new “Rick and Morty” returns to Adult Swim this Sunday night, at last, and is very likely to be viewed by a larger audience than past seasons. But who can say with certainty?

While it’s been off the air, previously uninitiated viewers have discovered it on Hulu, and for those folks, watching just one might not be enough.

"Rick and Morty" is utterly bingeable, and a case can be made that this is the best way to experience it .Episodes range from between 22 and 24 minutes apiece, and although the plot has serialized elements it’s also the kind of series you can watch in just about any order you’d like.

Harmon and Roiland hint that will change somewhat in this fourth season; enough action has transpired for the writers to revisit characters from past episodes that Rick has screwed over or offended deeply. There's quite a selection to choose from.

But as much as one may be tempted to allow the five “Rick and Morty” episodes set to debut over the coming weeks to stack up on their DVRs to gorge all at once, it’s just as likely (and recommended) that we watch them now and view them again some time later. Because as Rick might arrogantly observe, we need the excitement he offers, if only to help us make sense of our thoroughly disordered reality.

"Rick and Morty" is one of the few escapist series on TV that allows us to relax into the notion that most of what happens in life is out of our control, and the only thing we can do it organize our small corner of it to the utmost of our ability. What a simple and therapeutic concept.

For many people, the average animated series exists as a simple distraction, tapping into the plumbing within our consciousness where reserves of affection have been stored for cartoon silliness. (This assumes the viewer in question was indoctrinated into that grand tradition of being babysat by Nickelodeon and Disney Channel, or rising with the sun on Saturdays to watch hours of Looney Tunes.)

“The Simpsons,” “Bob’s Burgers,” and “Family Guy” may have hauled the genre into the more adult climate of prime time, and “South Park” takes what animation can get away with a step further to brutally skewer culture and politics.

“Rick and Morty” sets its gaze beyond all this, inviting the viewer to ponder the gift and burden of genius and what people of gargantuan intellect owe to the rest of humanity, starting with those closest to them.

And that’s just the crust of it.

Rick is a superior and admittedly unstable genius who lives with Morty, his daughter Beth (Sarah Chalke), his 17-year-old granddaughter Summer (Spencer Grammer), and the simpleton son-in-law he barely tolerates, Jerry (Chris Parnell).  In the show's universe, the characters we're following are but one version of an infinite number of themselves. Earth Rick C-137 declares himself to be “The Rickest Rick,” and the rest of his kind treats him as such, which is to say with envy, disdain, and some version of aggression.

But it also means he and Morty have buried versions of themselves in the Smith family’s backyard, a necessity after destroying their original home and leaving one version of their loved ones behind for a saner place.

A person could tumble down the tubes into all kinds of theories in these episodes, or simply tune in to laugh their heads off, but the singular allure of “Rick and Morty,” particular in 2019 (and 2018, when it won the Primetime Emmy for Outstanding Animated Program) is its comforting sense of nihilism.

Rick Sanchez’s entire outlook is predicated on the idea that he is an actor with a significant power to impact dimensions that tend toward chaos. He reminds his grandson Morty, a 14-year-old boy who is all heart, anxiety, and self-doubt (the things Rick lacks, in other words) of this on a regular basis. He also reminds Morty that he doesn’t care about him or his sister or anyone, really. Except he does, on a level he describes as irrational.

The President describes Ricky as “a living god,” which is pretty close to getting it right. But gods are secure in their place in the universe, even the ones prone to petty emotions like anger and jealousy.

Rick, in his loneliest moments, is profoundly depressed, and  that's why he's never too far from alcohol or some other altering substance, all of which makes him belch uncontrollably and sport a cascade of greenish goo on his lower lip.

Morty and the rest of the Smiths, meanwhile, keep Rick human by reminding him that they actually matter and, by extension, so do the rest of the universe’s “lesser” beings. Morty is the avatar for average goodness, but also sheer averageness.

And even though we often want Morty to win in his battles of will with Rick, the central moral of the story shows the hellish result of good intentions while positing that they're worth the effort anyway. Rick plays the hero most often to satisfy his own ego, to save his own skin, for profit or purely for the fun of it. Morty gets dragged along to tether Rick to what remains of his humanity or draw incoming fire. They’re the mascots for our understanding of how a corrupt and greed-driven world works.

“Rick and Morty” is ultimately an optimistic, hopeful series, however, precisely the kind of medicine the audience needs. The best episode are the ones in which Rick allows the worst to almost happen, then makes a last-minute move to correct the downward tumble either to preserve some dimensional equilibrium or wring some payback out of the hide of someone who richly deserves it.

Rick is the best and worst hero a world leader could call upon, acting with a confidence in the endless possibility the universe can offer, while demonstrating a potent level of snobbery when estimating, often correctly, the ways that its denizens underutilize or utterly waste that possibility. To him, every world in every dimension is stupid and wonderful and full of danger and delight.

Rick understands the pure pointlessness of existence — in any dimension, in any time, on any planet — and therefore behaves as if nothing matters and everything matters.  That kind of freedom can't be contained by any government, organization or societal structure, and knowing it fuels the ethos of "Rick and Morty" makes the show damn inspiring.

Remember, however, that Rick and Morty also are cartoons that can escape their mistakes with a portal gun, and nihilism is mainly soothing in theory. We can draw philosophical inspiration and embrace the swirl of disorder.  But do proceed with caution.

Check out the Season 4 opening sequence below: