Trifle is suitable for fancy dinners, holiday gatherings or even laid-back buffets and seasonal potlucks 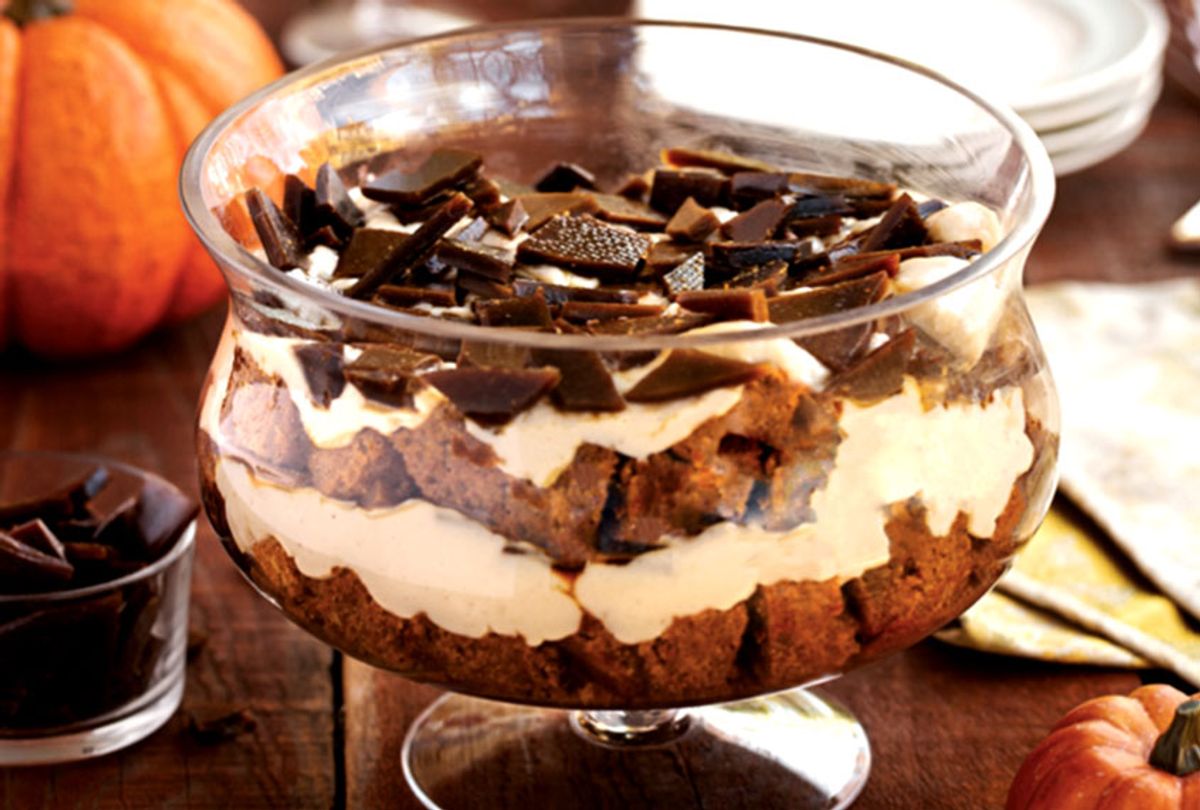 Hannah Kaminsky is a longtime vegan author who has developed an international following for her delicious recipes and mouthwatering food photography at the award-winning blog BitterSweetBlog.com. She is the author of Vegan Desserts, Vegan à la Mode, and Easy as Vegan Pie. But these decadent treats aren’t just for vegans—they’ve been tested and approved by both vegans and non-vegans alike, and are guaranteed to satisfy any sweet tooth! Whether you're a master baker or simply a dessert lover hungry for a more satisfying fix, these recipes won't disappoint. Friends and family won't believe that they're entirely plant-based—no eggs, dairy, or animal products. Finally, desserts that everyone can enjoy are just a few thoughtful ingredients away.

Piled high with several strata of cream, cake, and crunchy morsels all served up in one grand, family-style goblet, the trifle is the epitome of unpretentious decadence. It’s suitable for fancy dinners, holiday gatherings, or even laid-back buffets and seasonal potlucks. Although it does take some patience to make, each separate element can easily be prepared ahead of time and assembled when you’re ready. If candy making is not your forte, or you’re simply more of a chocoholic than you are crazy for caramel, throw in 1 to 2 cups of chocolate chips in place of the toffee, for pumpkin chocolate perfection.

To make the toffee, line a baking sheet with a silicone baking mat or piece of parchment paper. Heat the butter, brown sugar, and water together in a large saucepan over medium heat. It’s very important to stir the mixture continuously once it comes up to a boil, as it could very easily boil over if left unattended. Once rapidly bubbling, cook the sugar mixture for 12 to 15 minutes, until it reaches 300ºF (150ºC) or when a small amount of the mixture dropped into a cup of cold water creates hard, brittle threads. At that point, immediately pour the liquid toffee onto the center of the prepared baking sheet, being careful not to pour so much in one spot that it spills over the edges. Let the mixture sit until it has completely cooled and solidified. Break the resulting toffee into bite-sized pieces and set aside.

In a large bowl, beat together the yogurt, both sugars, pumpkin, oil, vanilla, and lemon juice until everything is thoroughly combined. In a separate bowl, sift together the flours, baking powder, baking soda, spices, and salt. Slowly add the dry ingredients into the bowl of wet, stirring just enough to bring the batter together into a smooth, homogenous mixture. Pour your batter into the prepared pan and bake for 30 to 40 minutes. When done, the cake will be golden brown on top and pulling slightly away from the sides of the pan. Let the cake cool completely before cutting into bite-sized cubes. Set aside.

The last component for your trifle is the vanilla pudding, which is also probably the easiest. You’re in the home stretch now! Begin by heating the nondairy milk in a large saucepan over medium heat. Whisk in the sugar and cornstarch together while the milk is still relatively cool, dissolving all the starch now to prevent lumps later. When the liquid begins thickening, whisk more vigorously and continue to cook for up to 5 minutes, until it takes on the consistency of pancake batter; it will thicken further as it cools. Remove the mixture from the heat, stir in the vanilla, and keep agitating it for a few additional minutes. Wait for the pudding to cool completely before assembling the trifle, or the toffee will melt. If you have the time to spare, refrigerate and chill the pudding in advance.

To put everything together, place half of the cake cubes in a trifle dish, in as even a layer as possible. Top this with half of the pudding, and then half of the broken toffee pieces. The rest of the cake follows, continuing the same pattern with the rest of the pudding on top of that, and the remainder of the toffee to finish. If you don’t plan on serving it immediately, cover with plastic wrap and store in the fridge. Just bear in mind that the toffee will soften as it sits; it’s still every bit as tasty, if less crunchy.