How to make gravy: Everything you’ve ever wanted to know 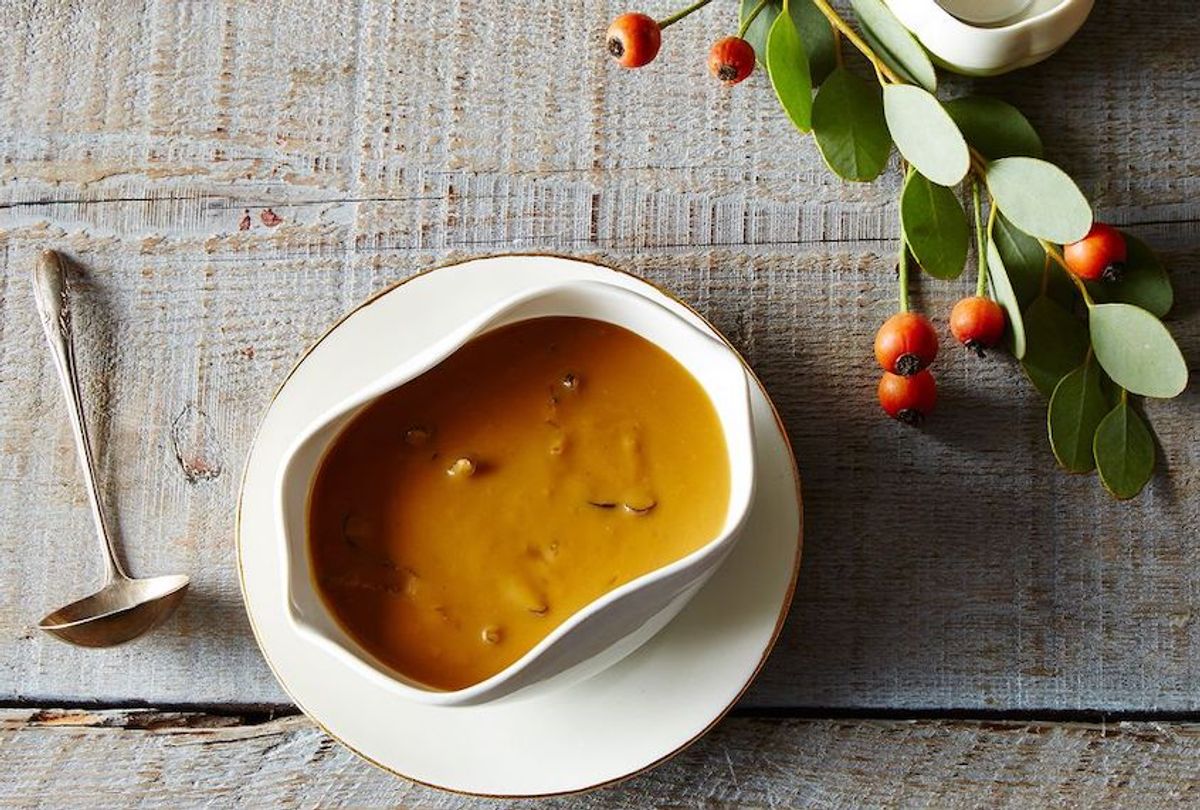 The word “gravy” has a secondary meaning after the first drippings-based one we already know. According to Merriam-Webster, gravy also means “something additional or unexpected that is pleasing or valuable.” Considering how great gravy (the first meaning) is, the second definition doesn’t surprise me at all. Because considering the magic, velvety sauce you can make from the gunk in the bottom of a turkey roasting pan, gravy is truly something valuable that’s completely unexpected.

As great as it is, gravy is typically an afterthought on Thanksgiving, literally one of the last things you make. As the drippings from the pan in which you roast your turkey are the main component of the recipe — meaning the bird must not only be out of the oven, but rested a bit so it’s no longer too hot to lift out — gravy is often hastily assembled five minutes before everyone sits down to eat. This probably means that, if you’re the one cooking, gravy brings memories of stress. It’s one more dang thing to churn out when you should really be putting your apron away and a glass of wine in your hand.

But did you know it doesn’t have to be that way? Not only can gravy actually be the first thing you make on Thanksgiving, it can even be prepared days in advance. (More on that soon.)

Whether it’s your first time making Thanksgiving dinner or you’ve hosted for the last 15 years, I bet you’ve come across some questions when it comes to making gravy. You might be wondering how to make a gluten-free gravy. Or a vegan one. You might be wondering how to make your go-to recipe thicker or thinner, or richer in flavor and color. Maybe you’ve never actually made it from scratch and would love to trade in your packet for the real thing.

Let’s ride the gravy train together, shall we?

But first, what is gravy?

Gravy is a sauce made from the pan drippings of a cooked meat dish that’s whisked together with stock and thickeners like flour or cornstarch.

Can you break that down for me?

A classic gravy starts with drippings, the rendered fat and juices that accumulate in the bottom of the roasting pan as meat cooks in the oven. Technically, you’ll get drippings from any roasted meat, be that poultry, pork, beef, or game; Thanksgiving gravy, of course, typically calls for turkey drippings. After pulling your turkey from the oven, let it rest for at least 20 minutes in the pan. Tip out any juices from the inside of the turkey onto the roasting pan, then remove the turkey to a cutting board. 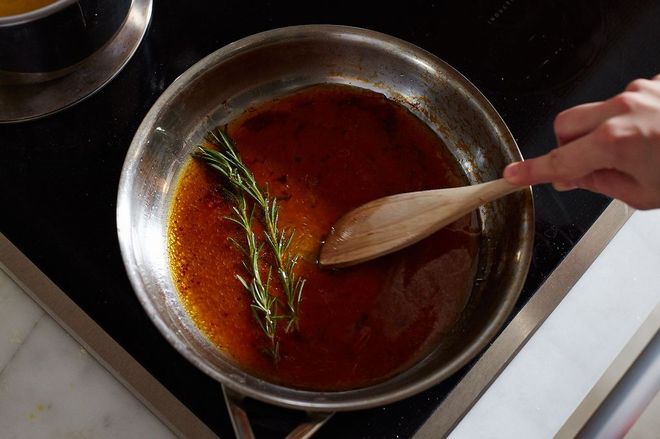 A note on fat: I’m sure someone will feel compelled to comment on the amount of fat that turkeys render, and how they’re concerned about all of it winding up in their gravy. I consider fat to be flavor, and rendered turkey fat will help your gravy taste rich and meaty. Unless you’re dumping several cups of gravy onto your plate, I think there’s no need to skim off excess fat from the drippings. However, if you feel strongly about losing the fat, after transferring your drippings from the pan to a liquid measuring cup, the fat will float to the top, and you can skim off as much as you want.

The next most important part of any good gravy is roux, a mixture of equal parts fat (typically butter) and flour that are whisked together on the stove. Roux, which is a common component of many classic French sauces like bechamel, can be cooked to any color, from a very pale gold to a deep brown — the darker the color, the more intensely toasty the flavor. In a gravy, the rendered fat from meat drippings can be used along with flour to make a roux, but you’ll often see the butter and flour roux fortified with fat from the drippings in recipes, as it helps make the most balanced flavor.

Now, for stock. In a perfect world, every time you roast a chicken, you’d save the carcass and make your own rich stock. You’d keep it portioned out in the freezer and never buy another carton of grocery store broth again. But we don’t live in a perfect world, and it’s okay if you only have packaged. Not to sound too much like Ina (store-bought is fine!), but keep in mind that the depth of flavor will never be the same as if you DIY, and always buy low-sodium so you can control the seasoning. Whisking stock into gravy transforms it from a thick and chunky paste into smooth, silky sauce. 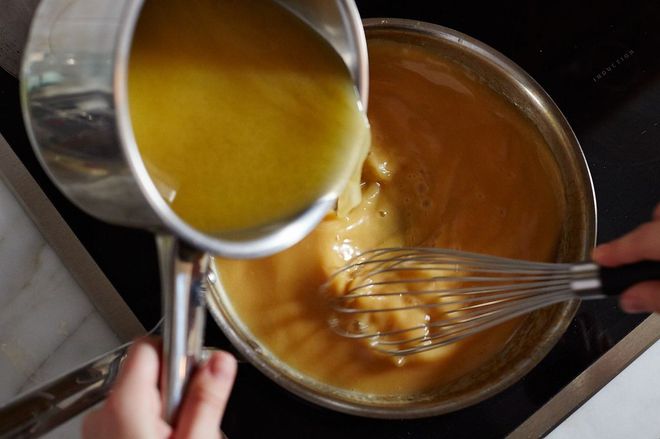 Gravy can be as simple as drippings, roux, and stock (and salt and pepper!), but to really kick the flavor into high gear, you’ll need some mix-ins: fresh herbs, vinegar, soy sauce, white wine, MSG, miso paste, and Worcestershire sauce will all punch up your gravy immensely.

How do I make gravy ahead of time?

One of the most common questions people have when it comes to gravy is about whether it can be made ahead of time. Of course it can! Instead of using drippings from the Thanksgiving turkey, you can roast off a tray of chicken wings and another of roughly chopped carrot, onion, and garlic. When the pans come out of the oven, you’ll combine the chicken and veg with stock to make an extra-strong mega stockthat will double as drippings and liquid. From there, you can follow a standard gravy recipe, pack it in airtight containers, and reheat it on Thanksgiving. 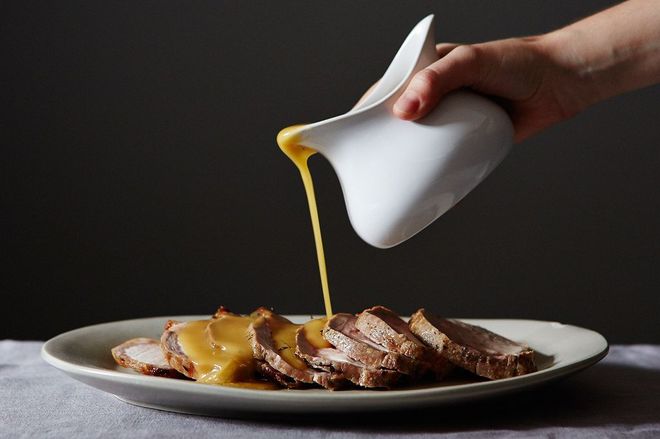 Can I make vegan gravy? Or gluten-free gravy?

Another common question when it comes to gravy is how to make one that vegetarians and vegans and those who don’t eat gluten can enjoy. Also totally doable! You can roast a mixture of mushrooms, onion, garlic, and potato with thyme until golden. Toss everything into the blender with vegetable stock and a bit of tamari and apple cider vinegar. Blend until smooth, then serve. The thickness from the vegetable puree will negate the need for flour—and it’ll be vegan to boot.

Now, here are my three go-to gravy recipes, one for each craving:

Combine drippings, stock, and wine if using in a large liquid measuring cup or bowl (strain the drippings through a fine mesh sieve if you want perfectly smooth gravy, but it's not required).

In a large saucepan, melt the butter over medium heat. Whisk in flour and cook until the roux darkens to the color of a cafe au lait, about 4-6 minutes.

Whisk in the drippings mixture to the roux 1 cup at a time, letting the mixture fully incorporate and start to bubble before the next addition.

In a small bowl, whisk together miso paste and apple cider vinegar, then pour into the gravy mixture and whisk to combine. Let gravy cook down until it’s thickened enough that it coats the back of a spoon. Season with salt and pepper to taste.

On another large unlined sheet pan, toss carrots, onions, and garlic with ¼ cup olive oil, salt, and pepper. Place both sheet pans in the oven and bake for 40 minutes, rotating the pans and tossing their contents halfway through. Turn the oven to broil and broil for 3 minutes.

Scrape the contents of both pans into a large stockpot or Dutch oven. Deglaze both sheet pans by pouring ½ cup of stock onto each pan and scraping it clean with a spatula. Dump the contents of both pans into the stockpot along with remaining broth, wine, and herbs. Bring the mixture to a boil over medium high heat, then lower heat and simmer until liquid reduces by almost half, about 35-45 minutes. Strain the liquid through a fine mesh sieve into a bowl and discard the solids.

Wipe out the stockpot (or use a clean large saucepan) and melt the butter over medium heat. Whisk in flour and cook until the roux darkens to the color of a cafe au lait, about 4-6 minutes.

Whisk in the faux-drippings mixture to the roux 1 cup at a time, letting the mixture fully incorporate and start to bubble before the next addition.

In a small bowl, whisk together miso paste and apple cider vinegar, then pour into the gravy mixture and whisk to combine. Let gravy cook down until it’s thickened enough that it coats the back of a spoon. Season with salt and pepper to taste.

Add 2 cups stock, soy sauce or miso, and vinegar to the blender and blend until smooth. If your blender needs help or the gravy is thicker than you like it, add more stock by the ¼ cup until your desired consistency is reached. Taste and season with more salt, pepper, or vinegar if desired.

Reheat the gravy in a saucepan when you’re ready to serve.