"Long before there was Donald Trump, there was Peter King" 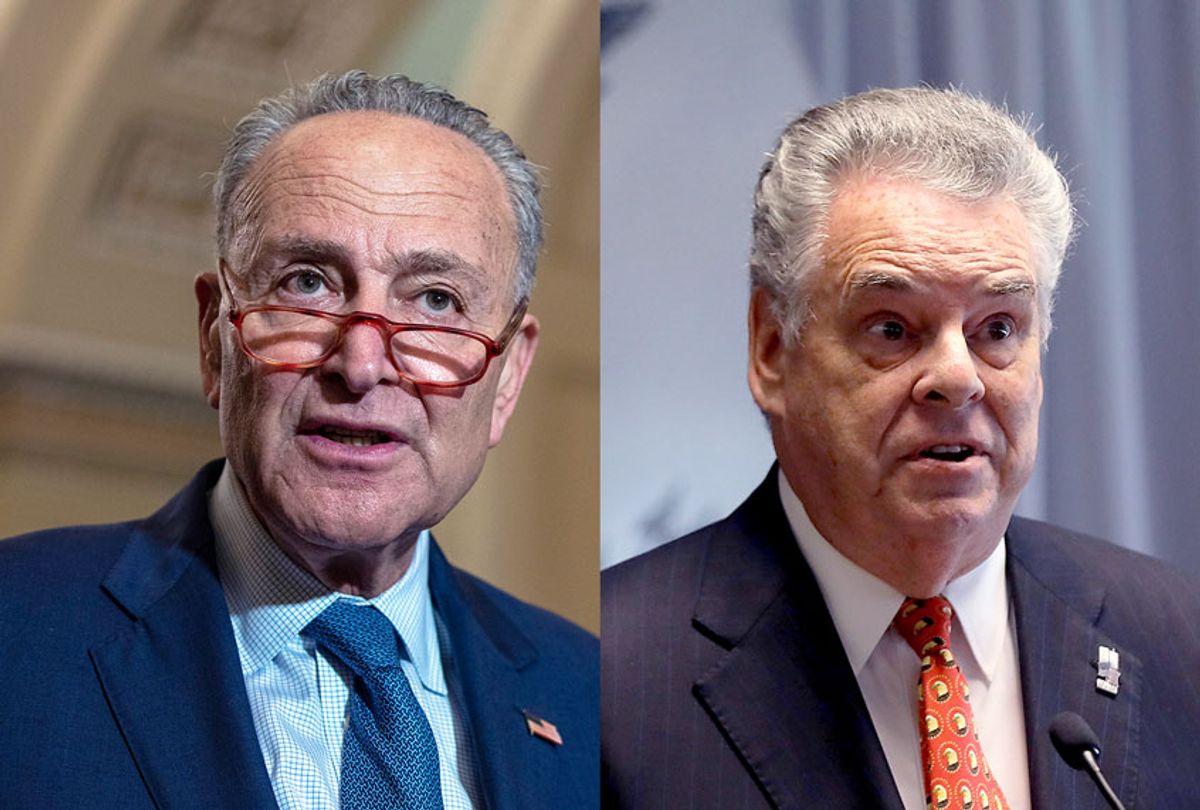 King announced Monday that he would not seek re-election after serving 14 terms in Congress, becoming the 20th Republican who has opted against seeking a new term in 2020.

"He's been principled & never let others push him away from his principles," Schumer tweeted of his fellow New Yorker. "He's fiercely loved America, Long Island, and his Irish heritage and left a lasting mark on all 3. I will miss him in Congress & value his friendship."

The comment came under fire from some Democrats, who pointed out King's extensive history of anti-Muslim and racist comments over his 25 years in Congress.

"Peter King has praised Trump's immigration policy, and here is Sen. Schumer fawning over his 'principles,'" he wrote. "We need a new Democratic Party."

Other Democrats pointed to King's comments that there "are too many mosques in this country" as evidence that he deserved no praise.

"Peter King is an Islamophobe who held McCarthyite hearings targeting American Muslims, said 'there are too many mosques in this country' and blamed Eric Garner for his own death at the hands of police," Rep. Ilhan Omar, D-Minn., wrote on Twitter. "Good riddance."

Matt Duss, an adviser to Sen. Bernie Sanders' presidential campaign, complained that "in 2019 you can be one of Congress's most outspoken anti-Muslim bigots and still be considered 'one of the more moderate GOP members of the House.'"

King's history of Islamophobic rhetoric is well-documented. Along with complaining about the number of mosques in the country, he also falsely claimed that 85 percent of American mosques were controlled by "extremist leadership."

After taking over as chairman of the Homeland Security Committee in 2011, King quickly launched hearings on "radicalization" among American Muslim communities, which Rep. Sheila Jackson Lee, D-Tex., called "a way to demonize and castigate a whole broad base of human beings." After Trump's election, King recommended that the new administration create a federal Muslim surveillance program and backed Trump's Muslim ban. King also said former President George W. Bush "should get a medal" for torturing terror suspects.

And King's controversial comments are not limited to Muslims. After Eric Garner was killed by a New York City police officer in 2014, King praised the grand jury for "doing justice" by not indicting the cop that killed him. King claimed that Garner "almost definitely . . . would not have died" if we weren't "so obese."

Last year, King compared NFL players protesting racial injustice during the national anthem to "Nazi salutes" and claimed that there was a "false narrative of police bias against black men."

Writing about the death of Michael Brown in Ferguson in a column last year, King complained of "the glorification of common criminals like Michael Brown, who was lawfully shot dead attempting to attack and take away the gun from a police officer with an unblemished record."

Spencer Ackerman, a columnist for The Daily Beast, questioned why Schumer would praise someone like King.

"While King had stiff competition, no legislator did more to demonize American Muslims than he did. Long before there was Donald Trump, there was Peter King," he wrote. "It is a testament to how cheaply mainstream American politics have come to value Muslim lives that King's career lasted as long as it did."

Ackerman added that the "principles" Schumer referred to "were the second-class citizenship of American Muslims."

Intercept columnist Mehdi Hasan wrote that Schumer's attempt to "fetishize the idea of bipartisanship" also "exemplifies is the Democratic establishment's unwillingness to take Islamophobia seriously — or to stand up for the rights of Muslim Americans in the same way that they stand up for other minority communities."

"Schumer's shameful tweet is a reminder that the Democrats need new leadership," he wrote. "They need senators and members of the House who are willing to call out Islamophobia and racism across the board, and who won't sacrifice the safety or security of minority communities at the altar of 'bipartisanship.'"