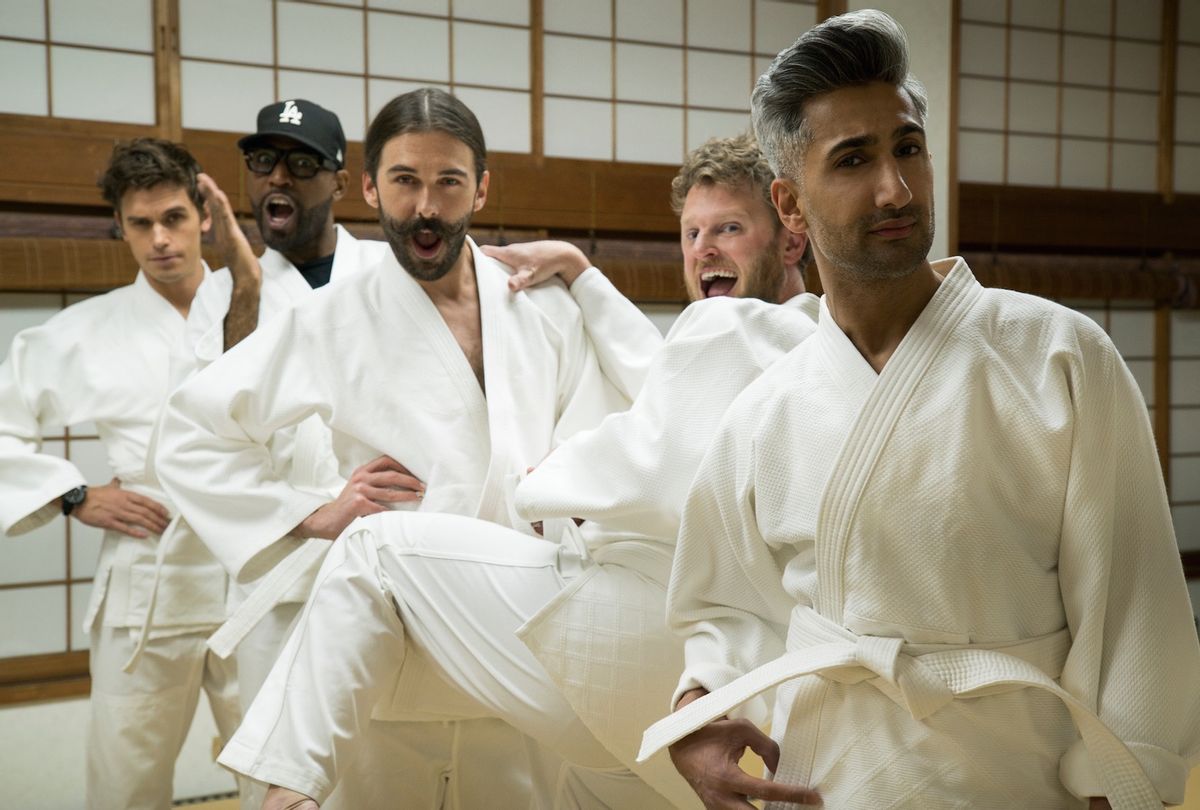 A few months before ABC’s groundbreaking comedy “Fresh Off the Boat” premiered, one tone-deaf reporter asked at a press conference for the show, "I love the Asian culture. And I was just talking about the chopsticks, and I just love all that. Will I get to see that?"

The collective cringe that rippled across the room was palpable. To reduce the lived experience of a multi-generational immigrant family to a mere set of eating utensils showed just how much "Fresh Off the Boat" was needed on TV.

With the rise of better representation of Asian American actors and storytelling, such blatant stereotyping and expectations are almost a thing of the past, at least in media portrayals. Yet old habits and less rigorous attention to detail can die hard; even well-regarded properties like “Twin Peaks” and “The Karate Kid” can fall back on Orientalism, an outsider’s view that sees Asians and their culture as a strange and exotic other, better used as window dressing than understood.

So when it came time for Netflix’s hit makeover series “Queer Eye” to visit Japan, the producers made every effort to not only do their research, but bring the Japanese perspective to the storytelling. The show has traveled overseas before to visit Australia, and although there was still a cultural exchange, everyone spoke the same language and had similar Western influences. The season in Japan might literally be an East meets West situation, but it didn’t need to retread any of those tired tropes.

In the four episodes, the Fab Five are guided through Japanese culture by fashion icon Kiko Mizuhara, with assists from comedian Naomi Watanabe and Buddhist monk/makeup artist Kodo Nishimura. While the gang struts and dances through the streets, getting the confidence party started in Tokyo, they also connect with and help four “heroes”: nursing home carer Yoko, who sacrifices for everyone but doesn’t seek anything for herself; young Kan, who’s more comfortable being out in the Western world than his own country; shy manga illustrator Kae, who has body confidence issues; and musician Makoto, who’s been stuck in an affection-less, sexless marriage due to his overwhelming fear.

Salon.com spoke with “Queer Eye” showrunner Jennifer Lane about the considerations - chopsticks or no chopsticks? – and challenges of putting the culturally educational season together.

Lane said that Netflix wanted to “test the waters of internationality” to see if the show’s appeal could grow “beyond the United States.” Japan seemed like a natural partner since its reality series “Terrace House” is coproduced with Netflix, and Japanese decluttering expert Marie Kondo is also a hit for the streaming service with her “Tidying Up” series.

For this season of “Queer Eye,” Netflix partnered with Japanese production company, Twenty First City Inc. out of Tokyo to get the logistics like the accommodations and timeframe hammered out.

“They started the casting producers off and that was where we'd struck gold. We had an amazing woman named Hana Sakata who was our casting producer and was so connected at the point when we had found our top four that we asked her to be our producer in the field,” said Lane.

“It was really wonderful that our heroes in Japan could have a familiar face when we started shooting,” she added. “We only, shockingly, brought 11 crew people to Japan to do the series. The rest of our crew was Japanese. I wanted to make sure that Kan or whoever was in a scene that they were looking up at Japanese cameras.”

“Queer Eye” is a highly personal show that requires its heroes to be vulnerable and acknowledge their insecurities in order to effect change in their lives. They’re usually nominated by friends or family members who want to a recognize the hero who doesn’t know their own value. In Japan, the network of nominators was more important than ever in a society that values conformity and not standing out from the crowd.

“These people that end up becoming our four heroes, they're obviously unique individuals to be able to say yes to us. We're choosing heroes who are going through a chapter in life where they might need help to get themselves where they want to be.

“I always liken it to if you were a beautiful girl and you were asked to be on ‘The Bachelor.’ You might be cynical about it, but at the same time wonder, ‘Is this the thing that might change my life forever?’ And I think there's a romance to that. ‘I was chosen; maybe this could benefit me.’”

The first episode in the series features Yoko, a single woman in her 50s who runs her own hospice care home and sacrifices everything – even her own bed – to the patients. Despite the constant, backbreaking work, she has a lighthearted and goofy spirit that enchants the Fab Five. She adores aspects of Western culture, including the movie “Roman Holiday” and apple pie. She was the perfect hero with whom to kick off the season.

“Yoko was so jovial and interested in playing along from the very beginning. She's so lovable. And you know when you have somebody who's in service to others that brings such a lovability to their character. Having her also gave such a universal appeal. This woman, the story is so common in every culture. She was our No. 1 from the moment we knew of her.”

Watch the clip below of Antoni teaching Yoko how to make tarte tatin:

One of the most heartbreaking heroes this season is Makoto, a man who hasn’t had a romantic moment or intimate conversation with his wife in years. Although he is not technically among the class of younger “herbivore men” who are indifferent to having physical, sexual relations since he’s married, he hasn’t been assertive about his desires either. He’s been driven by hear that his wife doesn’t love him and regrets marrying him.

“Even our casting producer, she was saying this is rare that people will be willing to talk about something that is obviously very common. It just goes to show that our greatest heroes are ones that are ready and willing to be vulnerable,” said Lane. “Usually if they're willing to be on television and share their very intimate stories, they are desperate for change.”

It may seem incomprehensible for a couple to prefer years of yearning over having a few honest but awkward conversations, but the drive to avoid confrontation and to get along is strong in Japan. Although this may seem to our Western mindset to stifle individuality, it values community and compassion.

Therefore, when it comes to Kan’s unwillingness to dress and act in ways that would code as more gay in Japan – after proudly going glam in Pride parades in Canada – he’s not facing the same type of antagonistic homophobia that can be found in the Western world.

“We came in strong with a feeling that we would not judge this culture at all and that includes in terms of LGBTQ rights,” said Lane. “As we came to realize in telling Kan's story, it’s safer to be a gay [person] in Japan than in the United States. People aren't getting beaten to a pulp in Japan. That's the bottom line.

"It may be more unique to be out and proud in Japan, but that's not necessarily because of a hatred towards gays or a religious aspect. That's because it's more common in Japan is to do as the masses. It’s respectful to do as the flock, to find synchronicity. So Kan really struggled with feeling disrespectful to his fellow Japanese, so his coming out story is braver in a different way than we have here.”

That sense of community also contributes to another aspect that surprised the Fab Five: a lack for littering and trash around the city. Despite Tokyo’s crowded streets and subways, everyone is conscientious about keeping the city neat and clean, even bringing one’s litter home to dispose of if no bins are handy.

“In Japan, we all recognize they were moved by this incredible sense of aesthetic beauty that the Japanese people have,” said Lane. “Not only is there no trash on the street, there's no gum stains on the sidewalk. You don't hear the horns honking. It's gentler.”

The Fab Five become the students

Even with Japanese experts in front of and behind the cameras, it was still important for the Fab Five to show their process of assimilating to a different culture.

“All the guys were very keen on asking questions, so we came in just like sponges, wanting to learn and know everything,” said Lane. “Do I bow? If I don't take off my shoes, am I rude? We had to learn the very basics. It was really eye-opening.”

Some of these learning experiences are incorporated throughout the episode, such as when they’re briefed on who their heroes are, and Tan asks if he should address Yoko as Yoko-san out of respect. Or when they take a judo class as part of teaching Kae confidence.

But each episode also includes an end cap, a brief and upbeat lesson where the Five learn some aspect of Japanese culture. These range from understanding why so many Japanese people wear surgical face masks to . . . how to use chopsticks. Yes, we’ve come full circle to chopsticks. But this isn't just a shortcut stereotype. At this point in the series, a range of Japanese experiences and cultural details have been shown. Kiko demonstrating how to use chopsticks just becomes one more lesson, not an encapsulation of an entire people.

“On our show we have the Hip Tip, and so what we wanted to do in this space was a Cultural Hip Tip. Here’s a little piece of Japanese culture that you can take away if you're interested in knowing,” said Lane.

“This was certainly discussed by us: ‘Who is this for? Like, wait, it's confusing. Japanese people don't need to learn these things.’ It was more of the Japanese saying to the international audience, ‘Here’s a little insight into who we are. . . into something that you probably didn't know about Japanese culture.’”

Once again, production wisely turned to the Japanese consultants on this matter.

“The way to hopefully avoid cultural embarrassment is to make sure that the Japanese people were leading those choices,” she said. “Our Japanese producers came up with a bunch of really fun ideas. I remember sending Naomi four ideas and she picked the face mask one and ran with it and came up with the bit.”

There’s also an added benefit in showing the Fab Five having to be vulnerable in this circumstance.

“Honestly, it's meant to show that the Fab Five don't know what the hell they're doing,” said Lane. “It's meant to admit that although we're here, we are fish out of water and we have a lot of learning to do. And it starts by asking questions and having fun.”

Lane isn’t sure which country that “Queer Eye” will visit next, but judging from how positive the Japan trip was, she’s sure more passport stamps are in their future.

“We were crying the night before we left, having to say goodbye to our friends. I think it was because we knew we had created something special,” she said. “But I am so proud that we were able to kind of reach across the Atlantic ocean and shake hands with our friends in Japan.”

“Queer Eye: We’re in Japan!” is currently streaming on Netflix.