A new recipe for your dinner repertoire. 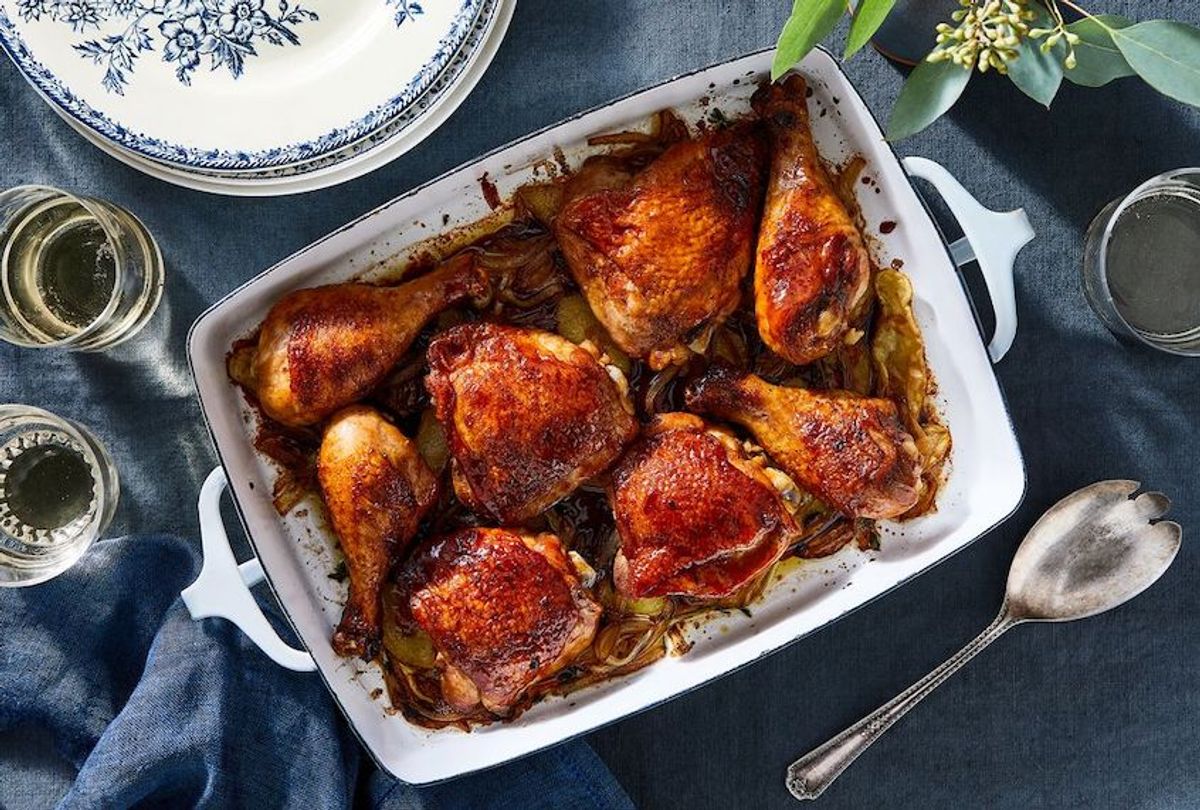 I’ve heard it all my life, the British staple statement: “You either hate it or you love it.”

I’ve never really known where I stood with Marmite. It’s never been more than a foreign condiment with which I had no relationship. I do know that there aren’t many flavors for which I’d use the word "hate." There are very few foods I don’t at the very least "like" when they’re prepared in the right way. Peppers, for example, can only be used in their truest form and not meddled into another dish; same goes for olives. Anchovies, on the other hand, must be in something else and no longer in their truest form—unless they’re fresh, floured, and deep-fried like I once had them in a tiny fish restaurant floating in the middle of the Italian sea.

Hating a food, however, has never come naturally to me. I find it a dramatic word to use for the very material that nourishes both our bodies and our lives. Even as a child I’d eat whatever was on my mom’s plate (I imagine to her dismay). It took me until I was all grown up, 29 years old and in the peak of pregnancy morning sickness to finally find myself truly hating food. To be blunt, ground beef—the base of so many frequented family favorites—was less desirable than the juice that drips out of a garbage bag, and protein was generally no longer considered a food group for me at all. This was around the same time I had a desperate hankering for the ambiguous dark gunk they call Marmite, and I found that I belonged with the side of the country that in fact loves it.

I must disclaim that once whatever life form that is possessing me to purchase four varieties of salt and vinegar potato chips for breakfast is finally released from my womb’s clutches, I could turn on this condiment at any point. But for now, I really love it. I know where I stand with Marmite—and for now, I am here to stay.

I’ve never favored sweets, but I’ve always appreciated the hypnotizing effect that chocolate being tempered or a cake being iced had on me. Marmite holds the posture of a pourable caramel and sends those same endorphins of satisfaction through me when I see it being decanted. Opening a fresh jar for that first dunk of a knife or teaspoon feels almost mystical. Its flavors have so much more of an umami richness than anything ever. Right now, I want to put it on everything, especially hot, over-buttered white toast, the first vehicle I ever tried it on. A friend’s husband made it his hangover cure of choice on a holiday weekend away, and as I watched with wonderment and curiosity, he proceeded to butter-and-Marmite my very own piece of toast for me, assertively handed it to me plate-less, and said: “Try it”. For that, I’m forever grateful.

But truthfully, the sticky elixir is worth more than just a spread for toast and a common topic of cultural debate.

Now that I’m free from the shackles of first-trimester blues (or greens, the color of my complexion most mornings until recently), I’ve been experimenting. Marmite is so concentrated that, unlike peanut butter, butter, or Nutella, even a teaspoon is overkill, which to me is a bit of a shame. I feel that its powerful flavor needs to be put to better use—and that’s where this recipe comes into play.

Heat and patience bring out Marmite's true capacity as an ingredient in cooking. I marinate my blank canvases (chicken thighs or drumsticks) in a mixture of Marmite, honey, vinegar, and olive oil and roast them atop lemony potatoes that cut the richness of the glaze. The result is crispy, full-flavored, and down-right miraculous.

2. Bring a pot of water to the boil. Add the potatoes into the boiling water along with a tablespoon of salt and the juice of 1/2 lemon, plus the squeezed lemon carcass. Boil for 10 minutes. Drain and shake well to fluff up and slightly damage the edges of the potatoes.

3. Add the potatoes to a medium-large roasting tray. Drizzle with 3 tablespoons olive oil, a pinch of salt, and the remaining lemon juice (1 1/2 lemons). Roast for 40 minutes, basting the potatoes with the excess oil every 10 minutes and turning the slices halfway through.

4. While the potatoes are roasting, tidy up a little, give yourself a little breather, and when they’ve been roasting for 20 minutes, start on the chicken.

5. Make sure the chicken pieces are dried well with paper towels and season them all over with salt and pepper. On medium-high heat, heat a frying pan large enough to fit the chicken pieces without overcrowding them (if the pan is not big enough, you may have to work in batches). Heat a tablespoon of olive oil and add the chicken skin-side down. Once they are crispy and a dark golden color, about 8 minutes, turn the pieces over and repeat, ensuring they become the same golden color on all sides.

6. Transfer the chicken to a separate plate. Add another tablespoon of olive oil to the same pan along with the sliced onions. Sauté the onions, scraping any chicken bits from the bottom of the pan along with them until they’re soft and brown, and then remove from the pan.

7. In a small bowl or glass, combine the Marmite, honey, vinegar, 2 tablespoons water, and a pinch of black pepper. Mix until you have a smooth marinade, making sure the Marmite and honey that sinks to the bottom are incorporated.

9. Once the potatoes are crispy and golden, remove the tray from the oven and turn the oven temperature down to 400°F. Top the potatoes with the lemon zest, the onions, and the thyme sprigs, followed by the chicken. Brush the chicken with some more of the marinade and place the dish back in the oven for 5 minutes so the glaze caramelizes and to ensure the chicken cooks through. Repeat this step two more times so the chicken is coated really well and it’s nice and sticky.