Hallmark Christmas movie schlock has infected all of TV, and the symptoms are bland and homogeneous

These are not the best of times. And that makes us all the more susceptible to maudlin holiday movie sameness 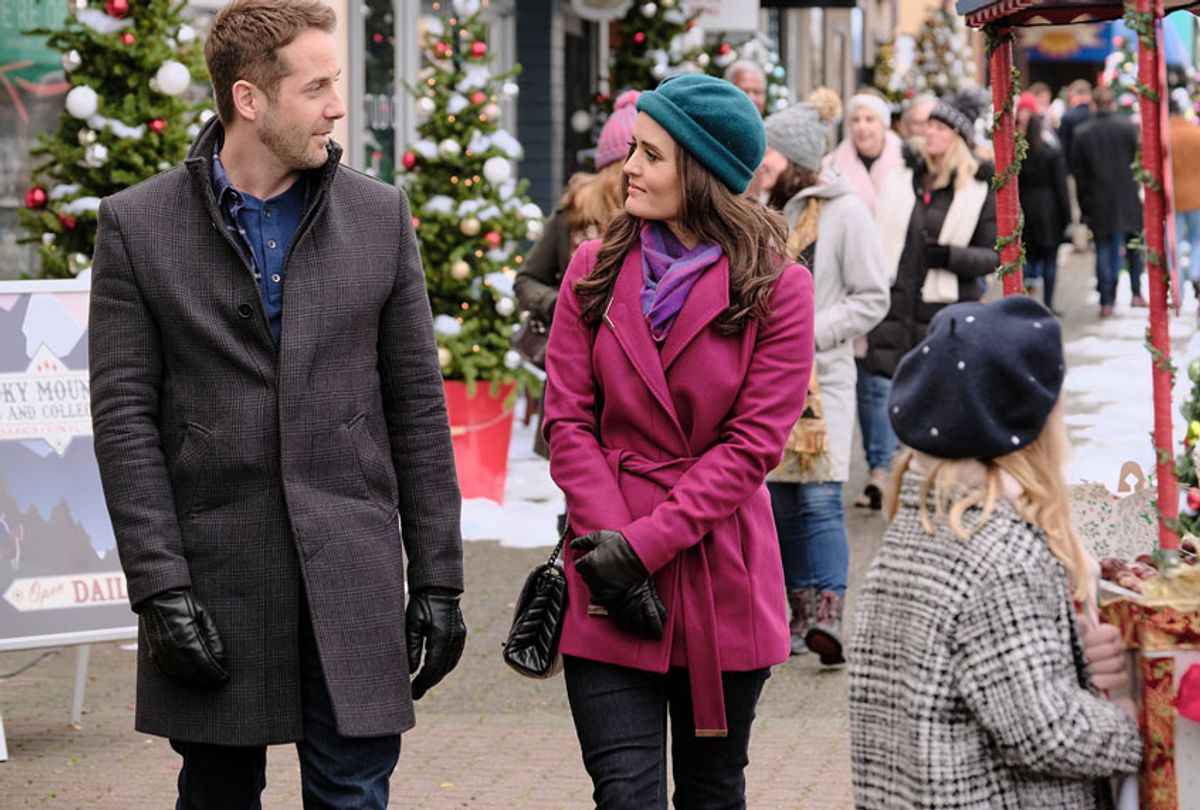 Among the many wonderful traits of a Hallmark holiday movie is that you can watch it with the mute button on and suss out exactly what's happening. This theory received a test-run while I was spending time with my mother-in-law, a woman who enjoys having the TV on while she plays solitaire on her iPad.

"For the company," she explains, as her freakishly large 45 lbs. miniature schnauzer stands in her lap.

Anyway, as visions of too-bright reds and greens and white Christmas flocking danced onscreen behind the action, I challenged myself to puzzle together a minimal storyline simply by evaluating body language.

In this particular story, "One Tree Hill" alumnus Hilarie Burton is invested in winning over some Conventionally Handsome Swain; their smiles are friendly and relaxed whenever they are together. Everyone clenches when the town snotty-but-hottie (Lauren London) swings by, speaking with an animated flurry of exaggerated undulating and overcompensating smirks. Those two young ladies really don't like each other, I thought to myself.

By the end of the story the "girls" (in Hallmark movies, adult women under 40 are "girls" or "young ladies") have mended fences, much to the relief of Hilarie Burton's parents (John Schneider and Sharon Lawrence). Like clockwork, Burton's character is snuggling up to Conventionally Handsome Swain. Roll credits.

Purely by observing bodies going through the usual motions of Hallmark holiday drama, the details of this particular Hallmark holiday film formula became clear: Young woman drops everything to return to her small home town and save the family business, finds love with some eligible bachelor tangentially related to enterprise.

That part, I was right about. After a confusing level of online digging, I found out we were watching "Poinsettias for Christmas." The official plot description explains that our heroine, Ellie, is called home to help her dad (Schneider) on the pointsettia farm to get things ready for the town's holiday parade. (Parades, parties or other types of pressure-inducing event also factor into Hallmark holiday flick action.) The source of the dramatic tension? The poinsettias have yet to turn red!

My error rested in the other details, and that's why it took a little while to find the movie in an online search. The problem? It wasn't "One Tree Hill" star Hilarie Burton I was watching, but "One Tree Hill" star Bethany Joy Lenz; and it wasn't Hallmark we were tuning into, but Lifetime.

Give me a pass for failing to recognize Marcus Rosner, love interest and local botanist, OK? He's been a regular on Hallmark's "When Calls the Heart" and Lifetime's "UnREAL" but otherwise he blends right into the scenery in which he's planted.

Like their stars, all of these movies blur together, and that's is less of a critique than an observation that this is the very point of their existence. The Hallmark holiday film serves as a screen capture of going through the motions of the season, and that goes quite a way towards explaining why they are near-perpetual residents near the top of the cable ratings at this time of year, either tying with or beating "The Walking Dead" in total scripted program viewership.

Hallmark movies are the ugly Christmas sweaters of the television medium. They're the butt of many jokes; nevertheless, we put them on in the name of being "festive," celebrating them anew right around the time Pumpkin Spice starts to wear out its welcome. Their general inoffensiveness (if you don't contemplate their core messages too deeply) makes them perfect to watch with the kids and with grandma and grandpa.

Over the years they've also become a strangely anticipated American pop culture tradition, evidenced in their proliferation across channels. A few years ago Lifetime, Hallmark's second closest competitor in the original movie space in terms of volume, began ramping up its holiday film roster. In 2019, Hallmark Channel and Hallmark Movies & Mysteries will run a total of 40 new original holiday movies, while Lifetime is showing up strong with 30.

Netflix, in the meantime, has six holiday originals queued up and this year, no doubt in reaction to an under-served market. OWN has leapt into the schmaltz factory with three new originals, all featuring black leads and ensembles of color.

In this era of lower levels of home ownership and smaller living spaces, these movies are the modern holiday hearth. Regardless of how we culturally identify, families welcome Hallmark holiday movies into our homes with few questions and treat them with the same regard or disregard as other holiday décor.

(My mother-in-law demonstrated this during our shared experiment, occasionally offered her review of Posner's portrayal by way of "he's hunky" without paying attention to what he was doing at any given moment or, indeed, the fact that TV wasn't making a sound.)

And when I describe these movies as Hallmark flicks, this applies to versions of them airing on Lifetime, Netflix, Freeform and as of this year, OWN. The three or four Hallmark Christmas movie formulas serve as the basic framework for most seasonal-specific movies that we are out there, meaning a whole lot of holiday mediocrity now joins the overall flood of TV mediocrity.

It's difficult to tell which network is bringing you a particular story about a career woman who forgot to find love but discovers it in an agrarian-adjacent exurb. After a point, it's also tough to tell one of the various Fox, WB, and CW and soap opera stars apart from another.

And thanks to these channels — Hallmark especially — the Christmas season begins a day or two before Halloween and stretches past the New Year. The term Christmas is used intentionally. There are a couple of new movies for 2019 that feature an interfaith romance between a Jewish lead and a Christian one, but beyond that, Hallmark assumes this holiday belongs to white Anglo-Saxon Protestants living in postcard-perfect small towns.

People of color are still a rarity in the context of these films, save for the character who is there to support or antagonize the white lead. I have written about this before, as have others in years past and in the present. Last year Hallmark Channel featured black leads in five of its 21 original holiday originals; this year there are four.

It remains somewhat perplexing to read Crown Media Family Networks CEO Bill Abbott evolving explanations as to why this is: This year he tells The Hollywood Reporter that "In terms of broadening out the demographic, it's something we're always thinking about."

In 2016, he told Salon that the main issue with finding talent of color for these movies was that the majority of production takes place in Canada. (Last time I checked, Vancouver B.C. has a sizable Asian population, and yet no new Hallmark movies feature Asian leads.)

Aside from Netflix's "Let It Snow," few if any new LGBTQ Christmas couples are forged under this year's mistletoe crop, either: Not one of Hallmark Channel's 2019 originals features a queer lead or central character. To be fair, Lifetime isn't better in this department: nary a major storyline depicting an LGBTQ relationship exists in its 30 new Christmas originals.

And while this remains a pain point among people yearning to see themselves in these stories, it also washes over the larger audience, part of a flood of sameness that negates the perception of humor and charm that used to be part of this cheerful cheese log of a viewing experience.

In the final analysis this is the true meaning and purpose of holiday film schlock – that is to say, you can tune out while you're tuning in. We used to think of these movies as specials. Now, I guess it's enough to accept that they're simply . . . there.