As the History saga starts its journey to Valhalla, what it says about leadership and power is worth looking at 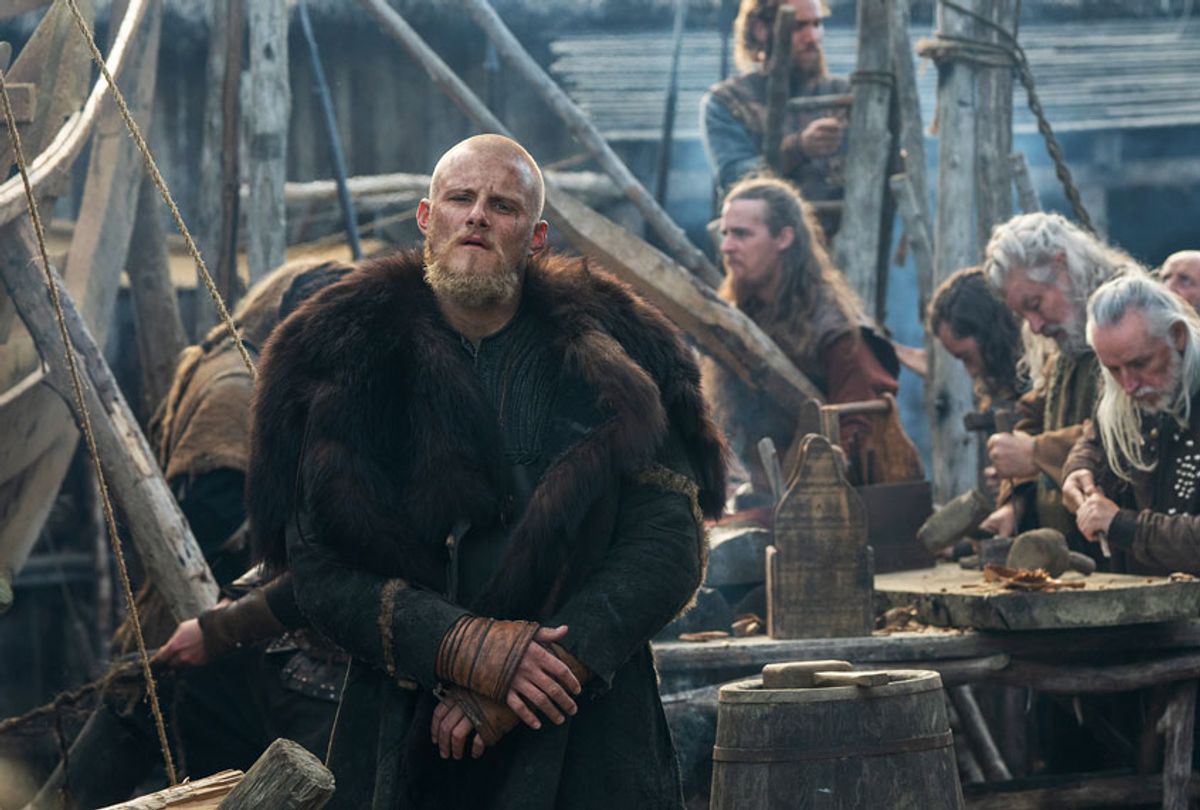 As 2019 draws to a close, one TV drama asks us to contemplate the weight of leadership and what makes a ruler great. Is it strength, mercy, benevolence? Or, in the end, does it really just come down to who has the best story?

This is not a late-hitting take on a certain HBO epic that concluded in the spring. Rather, History’s “Vikings” is asking these questions directly and with ample clarity.

The drama’s 20-episode endgame starts this week and sails into 2020, closing the book on a number of Norse legends it has tinkered with to enjoyable effect.

As it does so, its double duty as a fictionalized history-based saga and a political parable could not be more obvious. Kattegat, the story’s center, is a Norse kingdom newly freed from the clutches of a ruthless leader, and in the earliest days of reestablishing its openness to trade and cultural exchange. But that grim recent era has left Kattegat vulnerable and heightened divisions between it and its neighbors in nearby kingdoms and fiefdoms.

Basically, then, this is one version of that “tender moment in the life of [a] country” presidential candidate Pete Buttigieg keeps on talking about. Kattegat doesn't suffer from a power vacuum though, because a leader stepped up in the fifth season finale, one its people know and trust.

Instead it and its leaders have entered a space in its history, and history itself, filled with possibility, peril, and the unknown.

Applying the term "tender" to this scenario feels right. In a world where power is established by the people most skilled at wielding swords and military strategy, that’s not a good thing.

“Vikings” may partly owe its existence to the popularity of “Game of Thrones” — it debuted two years after HBO’s fantasy first premiered  — but across its six seasons the series established its own devoted fanbase and respectable ratings.

Nevertheless, some have outright rejected “Vikings” since its 2013 debut mainly because it isn’t “Game of Thrones.” It never aspired to be, but that doesn’t matter. Here there be no dragons, only shield maidens and conquerors. In some cases, they are one in the same. Here we have a cast of actors mainly known for their TV work (other than Gabriel Byrne, who appeared in the first season).

And here we have a program running on a basic cable network that for years was synonymous with cheeseball re-enactments. “Vikings” never had such low standards and in fact, steadily improved with each passing season. No matter; those who refuse to watch are free to stay that course, although they’ll be missing out on a final season I suspect will be more satisfying and fully baked than anything “Game of Thrones” creators D.B. Weiss and David Benioff presented during their finale run.

Season 6 picks up after a contentious arc pitting the sons of the long-gone king Ragnar Lothbrok (Travis Fimmel in early seasons) against one another for control of Kattegat, a major seat of power in Scandinavia in the series' timeline.

Kattegat’s throne has changed hands throughout the series, passing from Ragnar to his queen Aslaug (Alyssa Sutherland, also departed) to his ex-wife Lagertha (Katheryn Winnick) who reclaimed it by force.

In the fifth season, Ragnar and Aslaug’s son Ivar the Boneless (Alex Høgh Andersen), born without the use of his legs, established a style of rule that may seem awfully familiar to some watching at home.

Prodded by some old-fashioned sibling torture at the hands of his brothers Ubbe (Jordan Patrick Smith) and Hvitserk (Marco Ilsø), Ivar spends his entire life compensating for his disability by establishing a reputation as a heartless killer.

Where his father, mother, and Lagertha expanded Kattegat’s wealth by opening it up to trade, Ivar closes its gates to foreigners. Ivar is incurably paranoid, silencing all who speak against him by using an inspired variety of cruelties, even burning Hvitserk's lover alive. He declares the right to do all of this by claiming he is a direct descendant of Odin, a god.

Eventually Ivar’s half-brother Bjorn Ironside (Alexander Ludwig), Lagertha, and Ragnar’s eldest son overthrow him, but he disappears and escapes justice. And Lagertha, dethroned in a previous season and drives into madness, returns to crown her son king. The End . . . of Season 5, not the story.

History and TV storytelling follow predictable cycles. One repeats, and the other echoes certain refrains — one being if the villain is not dead, he’s not done. Sure enough, in the two-hour premiere, we find Ivar wandering the Silk Road and heading east to Kievan Rus, where his path crosses with another ambitious ruler with a cruelty streak that is at least equivalent to his own.

In creating “Vikings,” Michael Hirst loosely follows the outlines of various legends and accounts from Norse history, legend, religion, and politics to build a multi-generational family drama fueled by impressive battles, muscular swordplay, and bloody betrayals. The action is the smashing costume to the story’s substance and its provocative examinations of the benefits and drawbacks of cultural expansion.

Time and again the ruling clans of Kattegat and Norway have joined forces and collided philosophically —and physically — over the definition of what it is to be Viking. Are they explorers, raiders, warriors, or farmers? More recently, it asks how long the Norse beliefs that have long guided the Northmen can hold out against the ever-expanding forces of Christianity.

Hirst, who wrote the Oscar-winning “Elizabeth” and Showtime’s “The Tudors,” stitches together these threads we know about Viking society, politics and religion while luxuriating, if one can call it that, in understanding that the average person knows little about Norse heroes or their exploits. That allows him some creative license while at the same time obliging him to meet up with an ending already recorded by historians and storytellers.

The biographies of many major “Vikings” characters are readily available by way of a Google search, although owing to the generally ambiguous timelines and facts surrounding this era, Hirst has played around with a few of the details. Some of the drama’s best characters are, or were, entirely fictional.

Out of all the “Vikings” characters named for actual historic figures, Bjorn Ironside may be the most famous. His story is a great one, in that he was one of Scandinavia’s greatest rulers. But as Hirst always does, having an inkling of where a character ends up does not negate the tension and pleasure in getting to that part of the story.

And Ludwig’s performance has sharpened and matured along with Bjorn. At the end of many seasons of acting beside larger performances by the likes of Fimmel, Gustaf Skarsgård’s Floki (still missing as the new season begins), and Andersen, who maintains Ivar’s charisma even as he grows more evil, it's satisfying to watch him shoulder the plot’s center at last.

But a post-authoritarian regime held in place by a violent despot is not easily healed. “Vikings” is a realm where brutality is an indisputable way of life, and a person’s worth is in part defined by his or her ability to survive and overcome it. Even within this framework there are rules and traditional norms, and some who thrived under Ivar’s rule chafe at their return. Those people, in fact, prefer a barbaric culture in which they’re the ones doing the butchering.

And this is where the sixth season of “Vikings” has the potential to foment a more interesting conversation than simply guessing who will survive or who ends up on the throne. We have a good idea of the answer to the second question, and we’ve learned that the first matters very little. Many characters fans came to love over the years died sudden and brutal deaths, including Ragnar, the story’s first star. (In Viking warrior culture a noble death guarantees entry to Valhalla, so it’s not the worst outcome.)

With some of those mysteries mitigated or removed, Hirst can instead dissect a question presented time and again as we approach the 2020 presidential election: what is the best way for a nation to reunite and rebuild in the aftermath of reckless, destructive leadership? (Just for kicks, Hirst even throws in a B-plot that makes Hvitserk a failson, undone by madness and addiction.)

A person might conclude that the answers for 9th century Vikings markedly differ from those that suit 21st century Americans. But we soon see that many are fundamentally the same. Immediately Bjorn’s assurances to the people of Kattegat that he will be fair and just set up negative and possibly dire consequences for his family and rulership down the road.

Bjorn grapples with other conundrums forcing him to choose between mending relationships at home and answering an ally’s plea for assistance. With trust and alliances deeply damaged both domestically and regionally, where should a leader’s priorities lie? What is the cost of focusing on shoring up one deteriorating diplomatic area while others equally as pressing languish?

All the while we’re reminded that Ivar and his dangerous new frenemy Oleg (Danila Kozlovsky) are general unknown factors. And how is this for an unsubtle parallel to current affairs: the territory known as Kievan Rus is the precursor to several modern nation states, including Belarus, Ukraine and, yes, Russia. Oleg’s aims are far beyond mere meddling.

As is the case with all scripted programs, most “Vikings” viewers watch purely for its entertainment value and nothing else. No one should be denied their escapism in these times or any other. None who consider the possible allegorical parallels between the political machinations set more than 1,000 years ago and our fraught present should be dismissed either.

In either case, be glad that Hirst has 20 episodes to escort Bjorn to his throne – and relieved that he has demonstrated his ability and willingness to take the proper amount of time and care to do justice to his characters, real or legendary. We can never be certain about how well a series will nail the ending, but at least with “Vikings,” the fandom’s faith can lean on a firmer foundation based in history and demonstrated skill as opposed to spectacle and whim. And we hope any questions it leaves us with, gods willing, will be worth ruminating upon.

The first half of the sixth and final season of "Vikings" begins with a two-hour premiere Wednesday, Dec. 4 at 9 p.m. on History.