"The L Word: Generation Q" wants us back, but we'd rather hang with "Work in Progress"

Showtime's reboot is the return of a bad ex-friend, but its neurotic, sensitive new comedy feels like a keeper 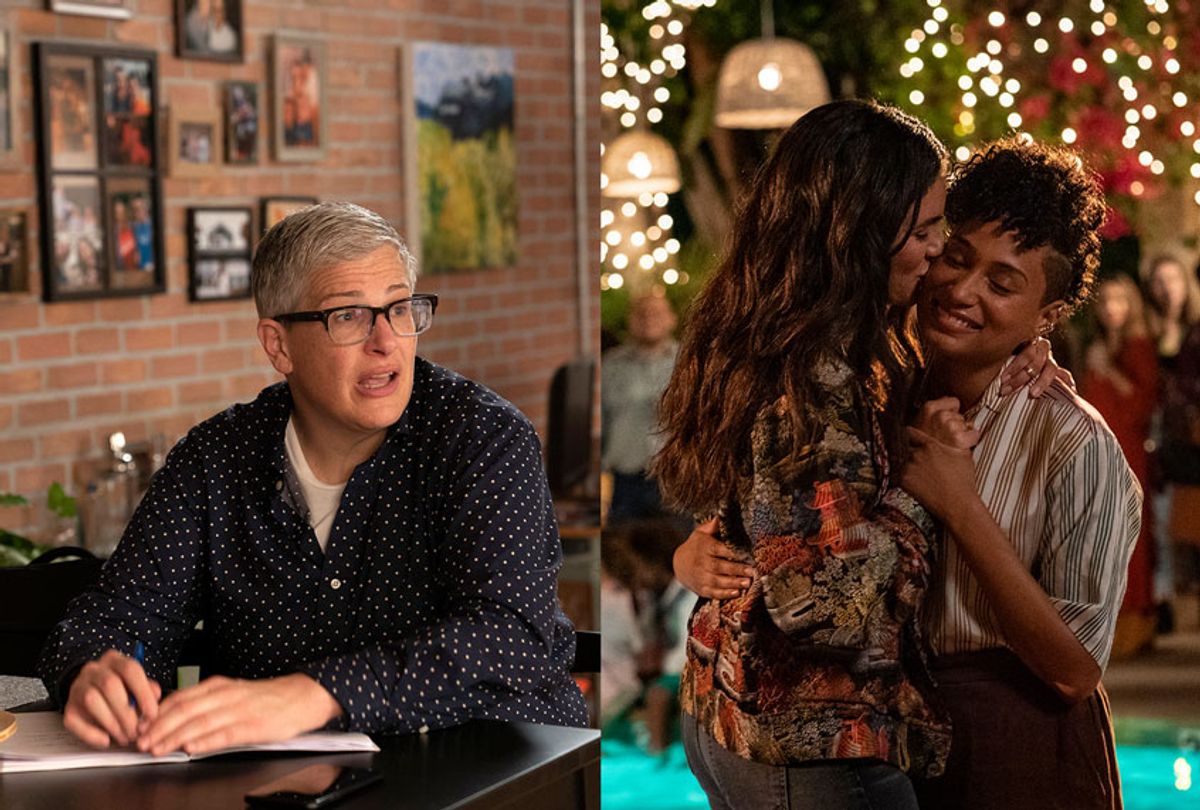 Television shows are a lot like friends. There are the solid, reliable blokes you enjoy spending time with, and there are the ones that introduce themselves as glam attractions that turn out to be bad pennies. The good ones make a person feel warm, affirmed, and accepted. The others leave a bitter taste that never entirely go away. And the worst of the lot? They leave us with baggage.

On Sunday, Showtime drops us a good friend/bad friend mixer by way of “The L Word: Generation Q” and “Work in Progress.” Just so we’re not mistaken, “Work in Progress” is the keeper . . . that is, if Abby McEnany will have us. She’d be the first to tell you that it’s not you, it’s her — rather, it's the version of herself that she plays in this show, a 45-year-old Chicago woman who self-identifies, right up front, as a fat, queer dyke.

As she opens the door to her life a little more, we also discover that she lives with obsessive compulsive disorder, struggles with her self-image (which is bound to happen to a person who has spent her entire life being misgendered) and carries around enough neuroses to collapse and elephant.

She’s also one of the sweetest characters to be introduced to the television audience, the sort of person you want to stand with and root for. Unsurprisingly, she is surrounded by friends accept her anxieties; that she has a wicked sense of humor helps a lot in that department.

Also to the surprise of nobody: Abby’s adventures come after “The L Word: Generation Q,” which is probably the Showtime series you’ve heard about. This new edition of “The L Word” arrives a decade after we collectively shut the door on this group of sophisticated, effortlessly fashionable, and preternaturally cool Los Angeles lesbians. And when I say shut the door, picture me slamming that mother so hard that the walls shake.

In its time, “The L Word” felt like a breezy, sexy, and fun show that you could watch with your gal pals. You could watch it with your man pals, too, since its cast of character is obviously sculpted to be alluring to straight men as well as women.

Jennifer Beals’ Bette, Leisha Hailey’s Alice, Katherine Moennig’s Shane and the rest of their power lesbian tribe lived in nice houses, wore the best clothes and partied with the fanciest people. Since they came on the scene right after “Sex and the City” peaced out in 2004, we were glad to have them.

And then the usual problems set in. The drama grew a little too melodramatic, a couple of the characters really started working our nerves — here’s to you, Jenny Schecter — and in the final season, the writing was a fresh version of awful.

As for the last episode, it still tops my list as the worst finale I have ever endured.

And now that terrible ex-friend is back with with a younger entourage in tow, and it is oh so confident that you’ll want to hang out again. Did we mention everyone’s moved up in the world? Ah yes: Bette, the former art gallery owner, has divorced Tina and is raising their teen daughter Angie (Jordan Hull) while she runs for mayor.

Shane touches down in a private jet and following an expedient plowing of its busty flight attendant, settles into her ultra-modern bachelorette pad with a view and a sexy dose of moodiness and angst. Why? Stick around, says “Generation Q.”

Pray tell, who makes up this “Q” group? Meet Dani, the daughter of a power broker with shady connections to Big Pharma (Arienne Mandi); her longtime lover Sophie (Rosanny Zayas), who works for Alice, who now has a talk show because average is out of the question for the O.G. “L Word” divas; and Finley (Jacqueline Toboni), their butch slacker Bud who is basically a younger Shane minus the ambition, plus a binge-drinking problem.

Rounding out the pile of young ‘uns is Dani and Sophie’s friend and roommate Micah (Leo Sheng), a transgender man, is probably the most levelheaded figure on the show and seems like a joy to be around.

However, despite the very intentional shot of Finley’s hair armpits and its opener on an explicit sex scene between Dani and Sophie, which ends with Dani showing Sophie, by way of her digits, that she’s menstruating, none of these women feel real, down-to-Earth or approachable.

On the contrary, the “Generation Q” crew seems mostly there to give the O.G.s an excuse to set up shop again. Much of the time “The L Word: Generation Q” feels like two glee-deficient series slapped into the same pair of pants, but sadly, left me with little desire to revisit “The L Word” or invite “Generation Q” over for a hang.

It has nothing to illuminate about queer life that isn’t explored with more sensitivity or emotional intelligence on shows like “Work in Progress.”

McEnany’s Abby is the opposite of model-esque: she’s constantly being mistaken for a man, and she doesn’t sugarcoat the fact that being a middle-aged fat, queer dyke is difficult. She wears Abby’s plain, gender non-conformity almost as a shield. She doesn’t do this for show; it’s just who Abby is. The huge laugh that sets up the series occurs within a couple of minutes, and boy is it dark. Abby announces she want to kill herself . . . and the party listening to her cry for help checks out in the most extreme sense.

“Work in Progress” counts Lilly Wachowski among its co-writers, along with Tim Mason, McEnany’s writing partner from the Chicago improv scene. Mason's and McEnany’s improvisational energy show through in the form of Abby’s unexpected choices and methods of coping, making her challenges feel all the more honest and relatable.

Her conventionally attractive straight sister Alison (Karin Anglin) refuses to cater to Abby’s self-pity and fixes her up with the adventurous and forward Chris (Theo Germaine), a transgender man who pursues Abby with a determination to figure out what makes her tick that quickly evolves into a lusty devotion.

The best part about all of this is that McEnany, Mason, and Wachowski design Abby’s adventures, which grow ever more ridiculous, with an emphasis on believability. McEnany’s treats Abby’s quirks as parts of herself that don’t need to be explained are never played for laughs, and Chris, her family and friends – lead by the very funny Celeste Pechous and her best friend Campbell – accept them and don’t tiptoe around her for it.

She refuses to let them, shutting down one potentially disastrous exchange with her brother-in-law concerning his curiosity about Chris by saying, “May I please remind you it is not the job of the queer community, in this case, me, to teach the straight cis community, in this case“ — she emphatically gestures at him — “this, something that they could easily learn in a public library. Or Google. My god, Mike. Would it kill you to read a book?”

The upshot is that we focus on Abby, her vulnerability, and her identity journey, an odyssey that isn’t centered upon her queerness but, instead, her expansive and unusual personality. But while Abby’s life is opening before us, we’re also granted a few lessons about how oppressive heteronormative mainstream culture can be to people who don’t easily fit into a box.

And none of this is presented as obviously as the expositional setup in “The L Word.” We see it in action by way of a chance meeting with Julia Sweeney, whose androgynous “Saturday Night Live” character Pat made Abby’s life a living hell, or through her deepening romance with Chris, who smoothly walks Abby through the etiquette of respectful communication and intimacy.

And its first four episodes include an inspired view of the frustrations Abby faces every time she goes to use a public bathroom, for reasons other than her appearance. Its whirlwind climax skewers the hypocrisy of discriminatory bathroom laws and transforms into a circular farce lampooning comparative suffering that keeps on finding ways to top itself.

“Work in Progress” makes no assumptions about anybody’s understanding when it comes to sexual orientation or gender identity, Abby included. We’re all stumbling through this new frontier, we’re all trying. And in its own way, it welcomes us into the awkwardness of moving into new social and psychological frontiers through Abby’s experience, in way that makes a viewer want to get to know her better. If not that, at the very least it may move some people to read a book.

The older you get, the more daunting it is to make new friends. That’s why a buzz from a long abandoned ex-bud can have a slight amnesiac effect, provided it hits under the right circumstances – like, say, a social drought or a moment of loneliness.

All it takes is a well-timed ding for you to consider, for a moment, the possibility of starting over with this person who was so very bad for you the first time around.

Don’t fall for it. Hold out for the real ones. “Work in Progress” is definitely one of those.