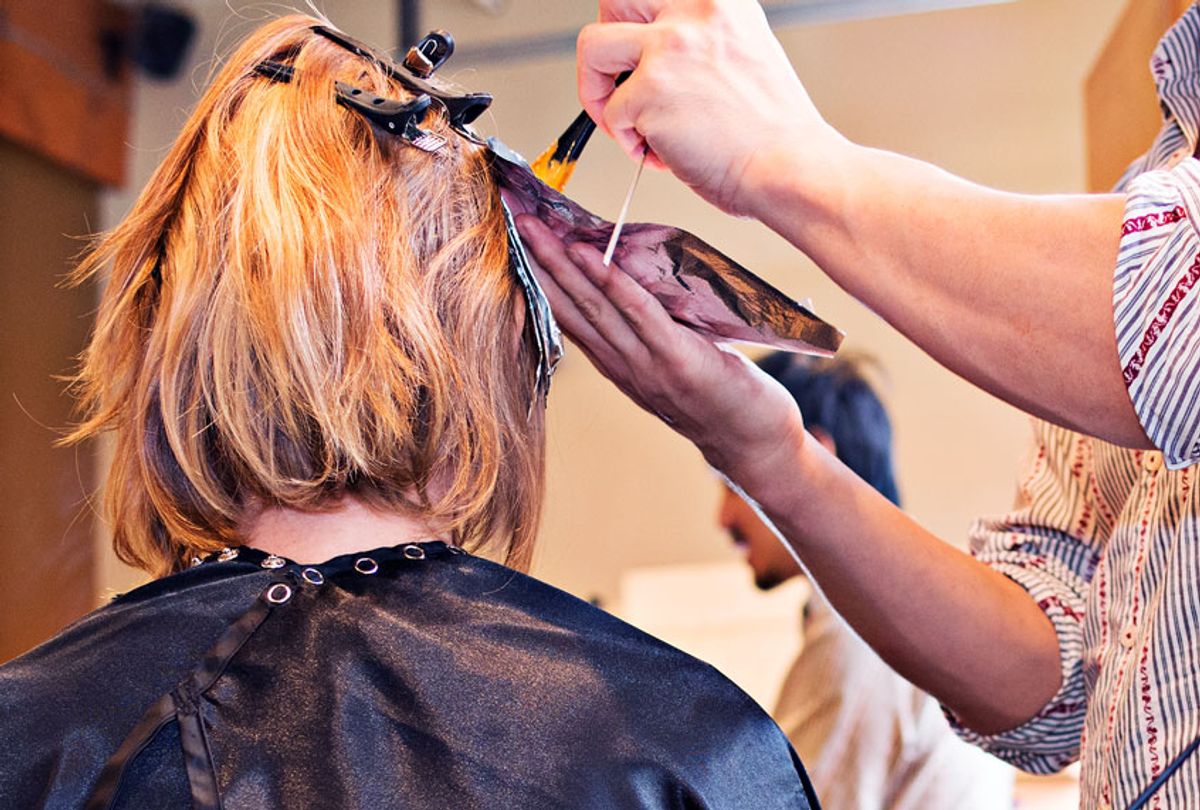 Woman having her hair colored in salon (Getty Images)
--

Current public health data predict that one in eight women will develop invasive breast cancer over the course of her lifetime. And while the definitive causes of breast cancer remain unknown, according to a new study published in the International Journal of Cancer, women who use permanent hair dye and chemical hair straighteners have a higher risk of developing breast cancer than women who don’t. Scientists suspect it is related to the chemicals used in the products.

Researchers at the National Institute of Environmental Health Sciences (NIEHS) published the study last week, using data from  46,709 women in the Sister Study, a landmark study aimed at identifying breast cancer risk factors of women whose sisters had been diagnosed with breast cancer, thus having an elevated risk. Women in this study were between the ages of 35 and 74, and participated in the study between 2003 and 2009. None of the women had breast cancer at the beginning of the study, but over eight years, 2,794 breast cancers were diagnosed. Using this data, researchers conducted a statistical analysis to estimate hazard ratios between dye and straightener use and the risk of breast cancer.

According to the results, all women who regularly used permanent hair dye the year before the study were 9 percent more likely to develop breast cancer than women who didn’t use hair dye. When looking at specific ethnic groups, the increased risk disproportionately affected black women. Among black women dyeing their hair every five to eight weeks (or more frequently), the risk of developing breast cancer increased to 60 percent, though that subgroup was also less likely to use permanent hair dye. For white women dyeing their hair that frequently, the risk increased by 8 percent. Researchers found little to no increase in breast cancer risk for semi-permanent or temporary dye use, as the frequency of use appeared to increase the risk.

"Researchers have been studying the possible link between hair dye and cancer for a long time, but results have been inconsistent," corresponding author Alexandra White, Ph.D., head of the NIEHS Environment and Cancer Epidemiology Group, said in a media statement. "In our study, we see a higher breast cancer risk associated with hair dye use, and the effect is stronger in African American women, particularly those who are frequent users. "

The association between the use of chemical hair straighteners and breast cancer intrigued researchers, too. Women who used chemical hair straighteners every five to eight weeks were 30 percent more likely to develop breast cancer. The increased risk was similar for both black and white women, but black women were more likely to use the chemical hair treatment regularly. The researchers suggest that this could be because the treatment uses chemicals that sometimes include formaldehyde, which is a known carcinogen.

Co-author Dale Sandler, Ph.D., chief of the NIEHS Epidemiology Branch, said in a media statement results need to be replicated in other studies — especially in light of prior evidence supporting the association between chemical straighteners and an increased risk of breast cancer, as well as prior evidence stating there is not a risk.

"We are exposed to many things that could potentially contribute to breast cancer, and it is unlikely that any single factor explains a woman’s risk,” Sandler said. “While it is too early to make a firm recommendation, avoiding these chemicals might be one more thing women can do to reduce their risk of breast cancer."

Researchers estimated that there are over 5,000 chemicals, including some with endocrine-disrupting properties, in hair products. Yet doctors and researchers advise that there is currently no need to panic, as more studies will be required to firmly establish this link.

"I think it's important for women, particularly African American women, not to panic every time a study comes out," Dr. Doris Browne, a medical oncologist and former president of the National Medical Association, told NPR.  "But it should raise questions for our primary care providers."