A corollary to the Green New Deal, or a step beyond? Experts weigh in on Warren's new plan 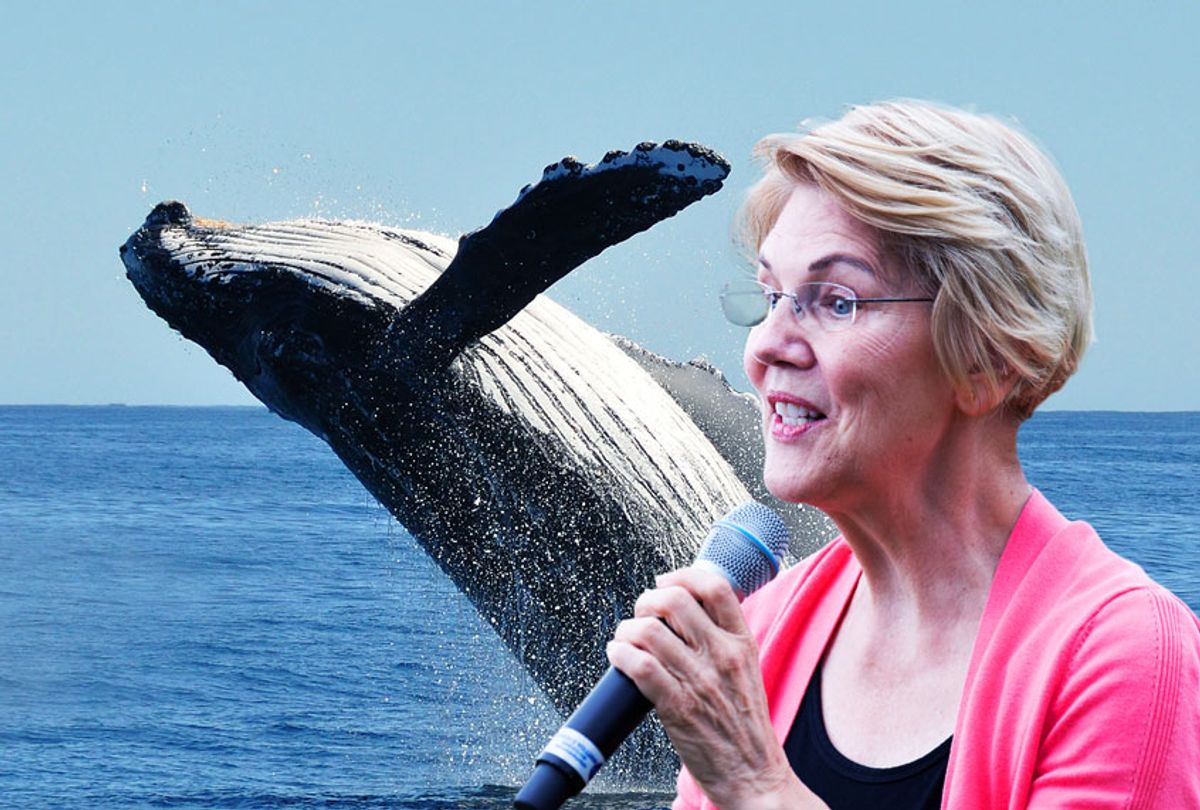 Warren is already a co-sponsor of the Green New Deal, which other Democratic candidates endorse as well, though the Blue New Deal is significant because it’s the first of its kind to be solely marine-focused.

“While the ocean is severely threatened, it can also be a major part of the climate solution – from providing new sources of clean energy to supporting a new future of ocean farming,” Warren states in the plan. “That is why I believe that a Blue New Deal must be an essential part of any Green New Deal – helping us fight climate change, protecting our health, and creating good, high-wage union jobs in the process.”

At a high level, the plan offers obvious and important solutions to fighting climate change. Considering that 71 percent of Earth's surface is covered with water, there is no question about the role marine biodiversity plays in the overall health of Earth. Indeed, scientists continue to explore and suggest ways in which healthy oceans could protect us from climate change. Yet the world’s oceans are suffering as a result of rising carbon emissions and global warming, and ocean pollution is part of a positive feedback loop that accelerates climate change.

Warren's announcement of the Blue New Deal was well-timed. On the same day, the 14th annual Arctic Report Card, compiled by more than 80 scientists for the National Oceanic and Atmospheric Association (NOAA), revealed troubling trends. The report card noted that the Arctic is warming more than twice as fast as the rest of the planet, and that the region’s permafrost continues to thaw, which has the potential to release up to 600 million tons of carbon into the atmosphere each year. Likewise, Warren's announcement positions her to steal back the media narrative from former vice president Joe Biden and Sen. Bernie Sanders, who have been at the top of various national polls.

When it comes to climate plans, Warren currently has an “A-” grade in the Greenpeace 2020 climate scorecard — ranked a bit  lower than Sanders' plan, by nine points.

Warren's announcement is also savvy in that climate change is (finally) an issue Americans care about, according to repeated surveys. A new Pew Research poll found that 77 percent of Americans believe it is a priority to develop an alternative energy source to fossil fuels. Warren's plan suggests solutions like making renewable fuel out of algae and seaweed.

"These resources even have the potential to become a key ingredient in renewable fuels — in the future, we might power our cars and airplanes on the algae grown in our seas," Warren states in the plan.

Many environmental groups and climate scientists were pleased to see a candidate focus on ocean conservation and draw attention to it by creating a specific plan.

“The climate crisis is an oceans crisis, and it’s vital that our next president realize we’re already in hot water,” Greenpeace USA Senior Climate Campaigner Jack Shapiro said in a statement. “Only by phasing out fossil fuels and creating a network of ocean sanctuaries can we prevent the worst impacts of climate change on ocean ecosystems, which millions of people rely on for their food and livelihoods.”

On Wednesday, a peer-reviewed study published in the scientific journal Environmental Research Letters found that emissions traced to the world’s largest fossil fuel companies — ExxonMobil, BP and Chevron — are responsible for more than half of the ocean’s acidification since 1880. Scientists believe ocean acidification is what wiped out many dinosaurs and marine life 66 million years ago,.

Indeed, Warren's plan takes a big stance against oil companies. It proposes to reinstate the Outer Continental Shelf Oil and Gas Leasing Program, which protected more than hundreds of millions of acres in the Atlantic Ocean and Arctic from oil drilling under the Obama Administration. In addition to entirely phasing out all offshore drilling, the plan states it could create up to 36,000 jobs by 2030 while transitioning to offshore wind and wave energy. For those who choose to transition industries, job training will be provided.

“I am committed to leaving no worker behind as we transition to 100% clean energy, and the men and women who have tirelessly worked in the offshore drilling industry are no exception,” Warren states in the plan. “A Warren administration will provide job training and guaranteed wage and benefit parity for workers who choose to transition into new industries.”

The plan also proposes establishing “Blue Carbon Zones” in federal waters, in which the government can identify, protect, and manage areas where carbon can be naturally sequestered — such as coral reefs, kelp forests, and wetlands. The plan states it will implement policies that combat marine plastic pollution, however the details on that are murky.

"It is exciting to see an ocean-focused environmental plan especially since the health of our oceans is linked to the threat of climate change,” Judith Enck, former EPA Regional Administrator and Visiting Professor at Bennington College, said in an email statement to Salon. “The next version should also address the growing problem of plastic pollution in the ocean, especially since plastics are made from chemicals and a by-product of hydro-fracking, bringing yet another climate change element to this issue.”

“I believe this is the first ocean protection plan  of its kind from a major Presidential candidate and is welcomed and very much needed," Enck added.

Andrew Rosenberg, director of the Center for Science and Democracy at the Union of Concerned Scientists, told Salon he was also enthusiastic about an ocean-focused plan, although he hasn’t analyzed it in detail.

“We should be a leader in not only ocean policy, but ocean policy to address climate justice,” he told Salon. “Coastal wetlands are an incredibly important sequestration mechanism and we could be a real leader the conservation of those areas.”

However, not all climate scientists are impressed, and would like to see more from candidates in terms of fighting climate change.

“Elizabeth Warren is on the right track with her ‘Blue New Deal,’ but frankly, I think we need to go much further in what I would call a ‘Whole New Deal,’” William Ripple, a professor of ecology at Oregon State University in the Department of Forest Ecosystems and Society, told Salon. “Rather than piecemeal solutions, we need transformative change in the way society functions and interacts with all of nature on planet Earth.”