To save the redwoods, scientists debate burning and logging 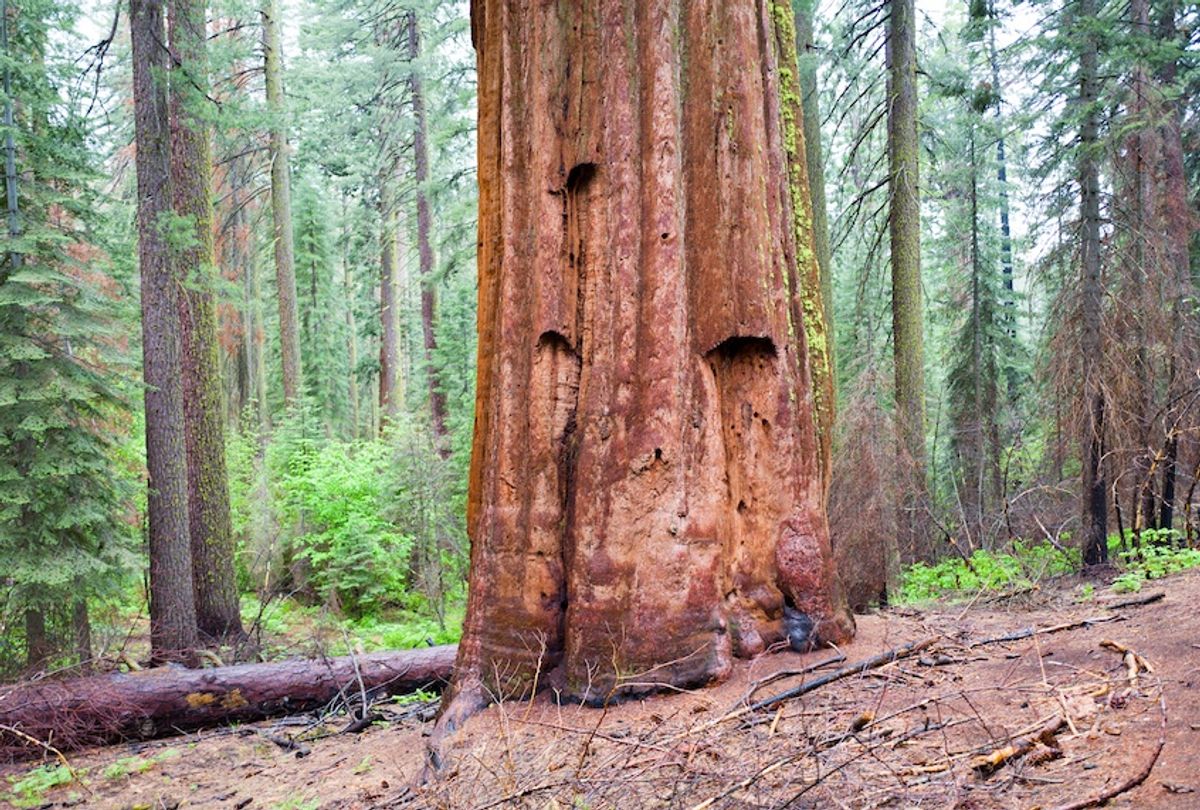 Millions of people travel to California’s redwood forests every year to marvel at the few remaining stands of old-growth trees. Sequoia sempervirens, or the coast redwood, thrives in the damp climate along the Pacific Ocean. Some are more than 2,000 years old, and the tallest can reach 380 feet. The state is also home to a second type of giant redwood, Sequoiadendron giganteum, or giant sequoia. The world’s most massive tree, it grows in the inland Sierra Nevada mountains, sustained by melting snowpack. The oldest sequoias are 3,000 years old, and although not as tall as coast redwoods, they are wider, sometimes reaching an impressive 30 feet in diameter.

Redwoods draw crowds, but they are also ecologically important. They act as natural water filters, processing trillions of gallons of clean, drinkable water every year. Redwood forests store at least three times as much carbon as any other kind of forest, and because the individual trees live for thousands of years, the carbon storage is long-term. That makes them important actors in the story of California’s changing climate.

But today, the redwoods are in danger. Climate change, pathogens, and years of misguided forest management practices have helped make wildfire California’s signature menace, and even these ancient trees are not immune. In 2008, for example, the Basin Complex Fire swept through the coast redwood groves of the Los Padres National Forest, burning for more than a month, destroying 58 structures, and forcing the evacuation of the entire town of Big Sur. The blaze consumed more than 160,000 acres on its way to becoming one of the largest fires in California’s history.

The circumstances that enabled the Basin Complex Fire haven’t improved much in the last decade. That’s why groups tasked with protecting the old-growth trees — including the state and national parks systems and the nonprofit Save the Redwoods League — practice active, hands-on management. This includes controlled burns and “restoration thinning,” the harvesting of smaller, younger trees to make way for older, larger ones.

Echoing many of the world’s forest agencies and preservation groups, Save the Redwoods League, which celebrated its centennial last year, says active management is the best way to guarantee the regrowth and preservation of forests in the aftermath of clear-cutting and in the modern era of climate change.

And yet, a century of forest management still hasn’t made clear if this is true for redwoods. Some environmentalists say forest thinning is simply logging by another name — a charge that goes back to the early 1900s, when logging was at its peak. Since Europeans began to settle permanently in California, 95 percent of the state’s old-growth coast redwoods and 33 percent of the old-growth sequoias have been lost. Today, some activist groups and scientists say these majestic trees would do best if left alone.

“As with everything in the natural world, it’s complicated,” says Jodi Frediani, a former environmental consultant and resident of the Santa Cruz Mountains who has been advocating for the redwood forests since the 1970s. “We only ever seem to know a part of the picture. And when we attempt to manage, we very often do damage.”

Prior to the 20th century, the periodic wildfires that swept through the giant sequoia forest system helped create a nutrient-rich soil and kept the understory free from the brushy undergrowth that would otherwise out-compete young sequoia trees. But then, in 1910, a series of devastating fires spread across the western U.S. By 1926, the United States Forest Service had adopted a policy of fire suppression for all fires covering 10 acres or more. The objective was total fire exclusion — keeping all fire out of wildland areas — in order to reduce the loss of resources and minimize firefighting costs.

But fire exclusion brought unintended consequences. When excess vegetation is allowed to grow, it creates the perfect conditions for devastating megafires, which burn faster and hotter and can potentially kill the old-growth trees that would have easily survived smaller fires. California’s recent drought has exacerbated the problem, spurring tree deaths. “There’s like 100 and something million dead trees in the Sierras right now,” says Richard Campbell, director of restoration at Save the Redwoods League.

Prescribed burning is one way to undo the damage caused by fire exclusion, Campbell says. A prescribed burn is a fire that’s planned and executed by people, and in modern forestry it’s one of the most important tools for managing forests. Forest managers set these fires under tightly controlled conditions that take into account things like public safety, weather, and specific objectives for the trajectory and end goals of the fire.

Prescribed burning has been practiced in the giant sequoia forests since the 1960s, when the ecologist Harold H. Biswell began studying fuel reduction in redwood stands near Sequoia National Park, earning himself the nickname “Harry the Torch.” Two decades later, when the Pierce Fire moved through Sequoia National Forest, it burned old-growth trees. But when the blaze entered the Redwood Mountain giant sequoia grove — a part of the park that had been subject to a controlled burn a few years prior — it became less intense and crews were able to contain it.

The coast redwoods face a different set of circumstances, though, says Kristen Shive, director of science for Save the Redwoods League. Fire exclusion has not been as harmful for these forests, she says, because the climate is wetter. In a damp forest, the vegetation doesn’t dry out as quickly and the microorganisms that live in the damp soil help the woody debris on the forest floor break down a little faster.

In a 2014 paper published in the Open Journal of Forestry, environmental studies professor Will Russell and his colleagues at San Jose State University wrote that active forest management of the coast redwoods might not be necessary. “In many forest types,” they wrote, “especially coast redwood forests, natural regenerative properties allow the development of old-growth characteristics over time without the need for additional active management.”

“Redwood trees are very fire-resistant,” adds Frediani, who has observed the effects of several smaller fires that swept through the redwood forests near her home. “Even 4-inch diameter saplings, their bark was [merely] scorched,” she says. “They didn’t go up in flames.”

Recent research doesn’t necessarily agree with Russell’s and Frediani’s assessment, though. A 2017 paper published in the journal Forests argued against interpreting the coast redwoods’ “ease of regeneration” and “rapid growth rates” as an indication that these giants can recover without human assistance. The authors noted that Russell’s research was conducted in unnaturally structured, second-growth forests, which are the forests that grow after a clear-cut harvest or other disturbance. Because old-growth forests are complex systems full of trees of varying ages, the authors argued that Russell and his coauthors had overestimated how quickly a second-growth forest, where most of the trees are of similar age, could achieve an old forest structure. (Russell says that he and his students have since collected additional data that further bolsters his earlier findings.)

Other studies have concluded that there may be some drawbacks to active management, specifically thinning. An influential 1983 study published in the Journal of Forestry found that redwood sprouts grew more slowly after thinning than they did if they remained unthinned. That and similar evidence are enough for some scientists to argue that the true impact of active management is still an unknown. Meanwhile, others say that the slower growth is simply a variable to be considered during active forest management.

Save the Redwoods League believes that active management will increase the forests’ resilience in the face of increasing wildfire threats, including the pathogen Phytophthora ramorum, which causes sudden oak death. This fungus-like organism has gained a foothold in parts of the coast redwood forests, and while it does not infect the redwoods themselves, it was implicated in the Basin Complex Fire.

Old-growth coast redwoods are ecologically different from California’s other forests. A diverse community of animals and plants — including tanoak trees — live in the understory. When the sudden oak death infects a tanoak, says Campbell, it kills the tree standing. The tanoak then begins to decay and break apart, creating a pile of highly-flammable material on the forest floor, under a dry but still-standing trunk. Fires in forests impacted by sudden oak death, Campbell says, burn hotter and climb higher, which puts the otherwise fire-resistant old-growth trees at risk.

Ultimately, the debate over forest management encompasses more than the interpretation of data. In fact, much of the outcry against thinning has its roots in the fraught history of logging in the state of California, and in a deep mistrust of the true motives for cutting down redwood trees. Russell thinks some of the forest management work Save the Redwoods League is doing is counterproductive, especially when it involves removing trees.

“They are doing thinning,” says Russell, “and that’s a funny word because it used to mean, at least in terms of restoration, thinning smaller, unmarketable trees.” Today, Russell says, Save the Redwoods League uses the word “thinning” to describe commercial logging, which is now being done in Redwood National Park under the banner of forest management. “They’re selling logs for income and then saying that this is also improving the forest recovery and reducing fire hazard.”

Campbell downplays the economic significance of thinning. “Most of the wood that is cut and felled is not merchantable,” he says. “It’s generally too small to be sold.” When economic opportunities do arise in the second-growth forests where logging is currently taking place, Campbell says that Save the Redwoods League doesn’t necessarily refuse them. But the organization is transparent about it, and Campbell says money is never the motive: “Every action that we take does have the stated explicit goal of forest restoration.”

Without active forest management, Save the Redwoods League says the forests might recover, but they won’t be the same as they were prior to the destructive timber management practices of the 20th century. “An entire giant sequoia grove will burn down and of course, something will grow there,” says Shive. “It’s not that if we don’t do something there will never be a forest again.” But, she says, the forest that grows there naturally may not feature sequoias, and it may no longer meet the habitat needs of the species that are native to the original forest system — the sword fern, redwood sorrel, huckleberry of the coast redwood forest, the sweet cicely, white hawkweed, and wood violet of the giant sequoias, and the hundreds of other plants, animals, and microorganisms that grow in the shadows of these ancient trees. That’s why people need to step in and guide the recovery in the right direction, she says.

“You could throw up your hands and say, we messed it up too much, let’s just walk away,” says Shive. “And I understand why people sometimes feel like doing that because ‘Oh, are we going to mess up again?’ But I think the best we can do is take all the best available science and spend some time in the woods, to better understand the forest, and then make the best decisions that we can.”

Becki Robins lives in California’s gold country and writes about science and nature, history, and travel. Her work has appeared in Earth Island Journal, Lonely Planet, and on the YouTube series SciShow.