Top 10 rap albums of the decade

From Jay-Z and Cardi B to Nas and the late great Nipsey Hussle, this was a tough list to put together 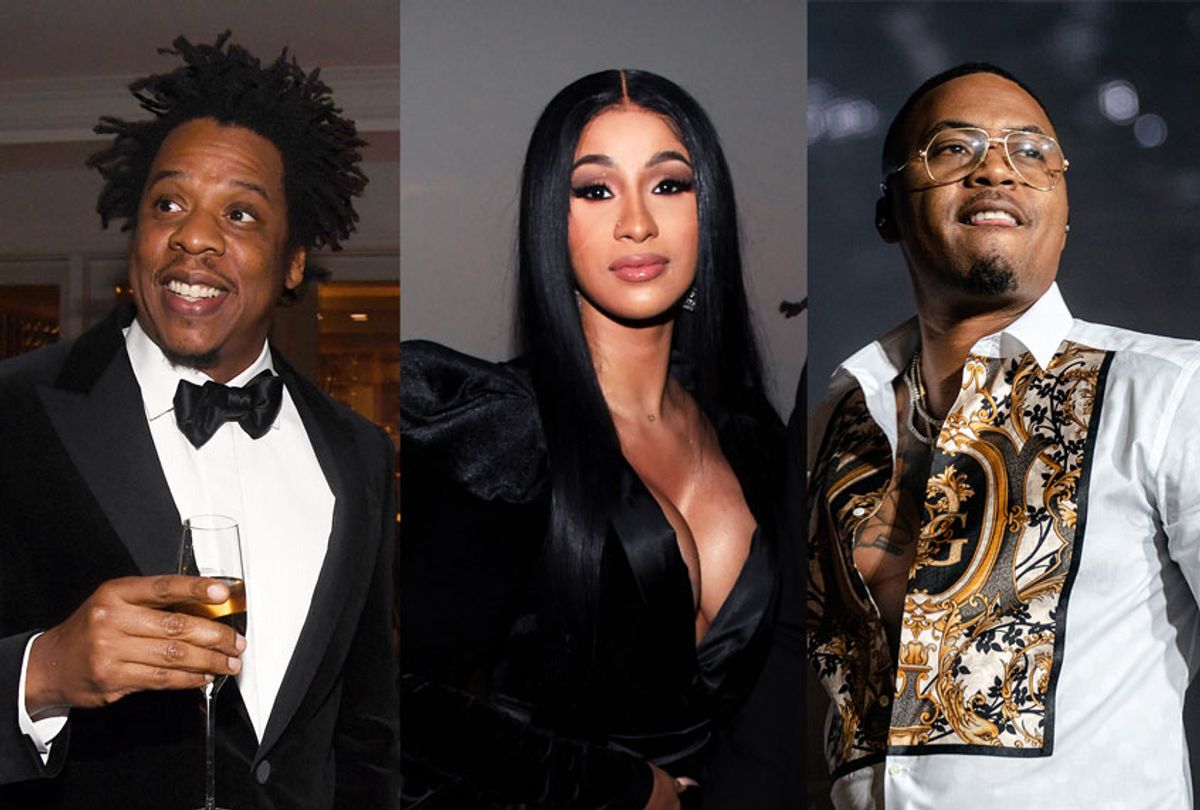 After listening to a zillion hours of music over the last week, I put together a list of the best rap albums of the decade.

The list is not ranked, and I must say that this was one of the must difficult tasks I have ever had to complete. Some of my selections  may make you upset, and I'm okay with that. Art is subjective, and I think that is cool. I would also love to see what you think should or should not be on the list.

They say rap is a young man’s game; it’s not. Jay-Z a married man, who was rapidly approaching 50, father of three and new advocate of therapy dropped arguably the best album of his amazing career in 2017.

The dude who mastered street rap and crack ballads flipped the switch on the industry by displaying the devastating after effects of the drug game, and what happens if you live long enough to crawl out of the semi-automatic era?

"4:44" talked about personal relationships, his mom coming out of the closet, financial responsibility, missteps, the power of love and getting older. It was the perfect album for both aging hip hop fans and the younger generation who wanted to know that older dudes like Jay made it through to get where he is now. My favorite tracks are "Kill Jay-Z," "Smile," "Family Feud," and "Marcy Me."

Cole has been one of the most respected artist in rap since his debut mixtape "The Come Up," and then "The Warm Up," and "Friday Night Lights" came after. They were all classics. He is master of words with a hold on language that we hip hop fans haven’t seen since Nas dropped "Illmatic" in 1994.

After Cole's studio debut "The Sideline Story" and "Born Sinner," many hip hop fans found themselves longing for Cole’s mixtapes. Though Cole’s first two studio releases were both great – since studio albums are meant to draw wider audiences and generate songs with potential for radio airplay – they didn’t give us the same feeling as his mixtapes. Then he dropped 2014's "Forest Hill Drive," 13 tracks of brilliance, a studio album with underground mixtape feel. You can listen to the album from front to back and back to front. The best tracks on the album, and this was also a very tough task, are "Fire Squad," "January 28th," and "Love Yourz."

Nipsey Hussle has been the underground king his entire career. I first heard "Marathon" back in 2010 and was in awe with the way he intertwined history with street life, gang culture, and social responsibility. And Hussle didn’t only rap it, he lived it by setting up scholarships for children, building a STEM program, and literally buying the neighborhood.

Even though "Victory Lap" was his first studio album, Hussle has been ready for the big league since he started dropping mixtapes in his early 20s. We tragically lost Nipsy Hussle this year to an act of senseless violence – he was gunned down in front of a shopping center he owned, we will never know how great he could’ve been.

Every song on "Victory Lap" is classic, my favorites are "Blue Laces," "Last Time That I Checc’d," "Dedication," "Grinding All My Life," and "Hussle & Motivate."

Nas has been hailed as one of the best rappers alive since he appeared on "Live at the Barbeque" back in 1991 spitting the infamous lines “Street's disciple, my raps are trifle, I shoot slugs from, my brain just like a rifle/ Stampede the stage, I leave the microphone split/ Play Mr. Tuffy while/ I'm on some Pretty Tone shit/ Verbal assassin, my architect pleases/ When I was twelve, I went to hell for snuffing Jesus.” That moment established Nas’ greatness, and he hasn’t disappointed since.

"Life is Good" appeared after the artist was on a four-year hiatus full of love, welcoming a new child and then divorce. The classic album cover of Life is Good displays an image of Nas holding his ex-wife’s wedding dress. He addresses the marriage, his place in hip hop, nostalgia, and rules of surviving in the game form more than 20 years. I love "No Introduction," "Daughters," "Reach Out," "A Queens Story," "Cherry Wine" featuring Amy Winehouse, and "Stay."

Kendrick Lamar dropped four albums this decade, and they all could’ve held a place on this list­­. He is the best young rapper alive and  already a hip hop legend. What’s most fascinating about Kendrick, is that he gets better with every album. Some artist buckle under the weight of fame, but the pressure seems to make Kendrick even better.

"DAMN" is a perfect album, from to start to back; it includes top-notch lyrics, creativity, thought-provoking content and original visuals. "DAMN" brought us "Love" and "Lust," two conflicting but connecting tracks, master storytelling in "Duckworth," and the mega hit "DNA." It is also the first rap album to ever win a Pulitzer Prize, so there’s that. I can’t wait to see what he does next.

A gem that came out of the decade is Rapsody. She is one of the best living emcees, not woman emcees, but emcees. She has a flow, delivery, skill set, knowledge, and work ethic that can only be matched by the likes of Kendrick Lamar and J. Cole.

Rapsody dropped three albums over the past 10years including "The Idea of Beautiful," "Laila’s Wisdom," and "Eve, and they all deserve a listen; however, "Laila’s Wisdom" is my favorite. It was her breakout album and the one that has made her a household name. My favorite tracks off of the project are "Power," "Sassy," and "Nobody."

Way before Kanye was a MAGA groupie or top-ranking mega church performer, he was running hip hop, creating some of the best beats, music, and albums in rap history. The Chicago native had a string of classic albums including "College Dropout" and "Late Registration" leading up to "MBDTF."

The whole project was dope – from the visuals, the mini film for "Runaway," to features –  Kanye brought out the great Raekwon, Jay-Z, Pusha T, Rick Ross, Kid Cudi, John Legend, and Nicki Minaj whose "Monster" verse was the best on the album. Dude had one song, "The Blame Game," where he merged a rap, a poem, and a stand-up comedy skit together, and surprisingly, it worked. Man, I miss the old the Kanye! He was the best and this album proved it.

The Clipse was one of the biggest rap acts of the early 2000s. Early on it wasn’t strange for people to pair them with Mobb Deep, and A Tribe Called Quest when debating the best rap group of all time. After their third album, "Til the Casket Drops" in 2009, "Malice," the older of The Clipse brothers found Jesus and exited the rap game.

Pusha T didn’t miss a beat – he hit the ground running, dropping mixtape after mixtape before his first studio smash "MNIMN." The album had 12 tracks, all of them knock with features from Big Sean, 2 Chainz, Kelly Rowland and Kendrick Lamar. The album is raw, so raw that it almost has an underground fell even though it received so much mainstream success. Pusha T released three great albums over the decade, "MNIMN" is the best.

Top Dawg Entertainment (TDE) has become one of the most respected labels in hip hop history – mainly because all of their artists are extremely talented from Ab Soul, Schoolboy Q and SZA to Isaiah Rashard and Kendrick Lamar. Jay Rock fits in, with a masterful skill set and west coast grittiness that has been celebrated across the country.

Kendrick Lamar has obviously been the biggest draw to TDE; however, diehard fans on the ground, who really want to feel Watts are always checking for Jay Rock. The Grammy Award-winning artist dropped "Redemption," his third studio album in 2018 after recovering from a life-altering motorcycle accident. The lyrics are hard and relevant, emotional and funny at times. My favorite tracks on the album are "The Bloodiest," "ES Tales," "Wow Freestyle," and "Redemption."

Cardi B is our very own trap Cinderella. She came on the scene about six years ago with the viral Instagram videos that landed her on "Love and Hip Hop." Reality TV wasn’t her last stop; Cardi B’s platform and reach continued to grow and she parlayed her fame into a music career.

So many people wrote the album off as they just saw Cardi B as reality TV star, but they all had to eat their words because her single "Bodak Yellow" was an instant hit, an anthem for underdogs even. People loved  it, as it cranked in clubs, cars, basketball games, everywhere! I heard it the other day and I’m still not tired of it. "Bodak Yellow" was follow by the release of Cardi B’s album "Invasion of Privacy" and it didn’t disappoint, soaring to the top of the charts, winning a Grammy for best rap album and moving over 3 million units in America.

My favorite tracks on the album are "Be Careful," "Bickenhead," and of course "Bodak Yellow."