One writer reflects on her most essential holiday ritual. 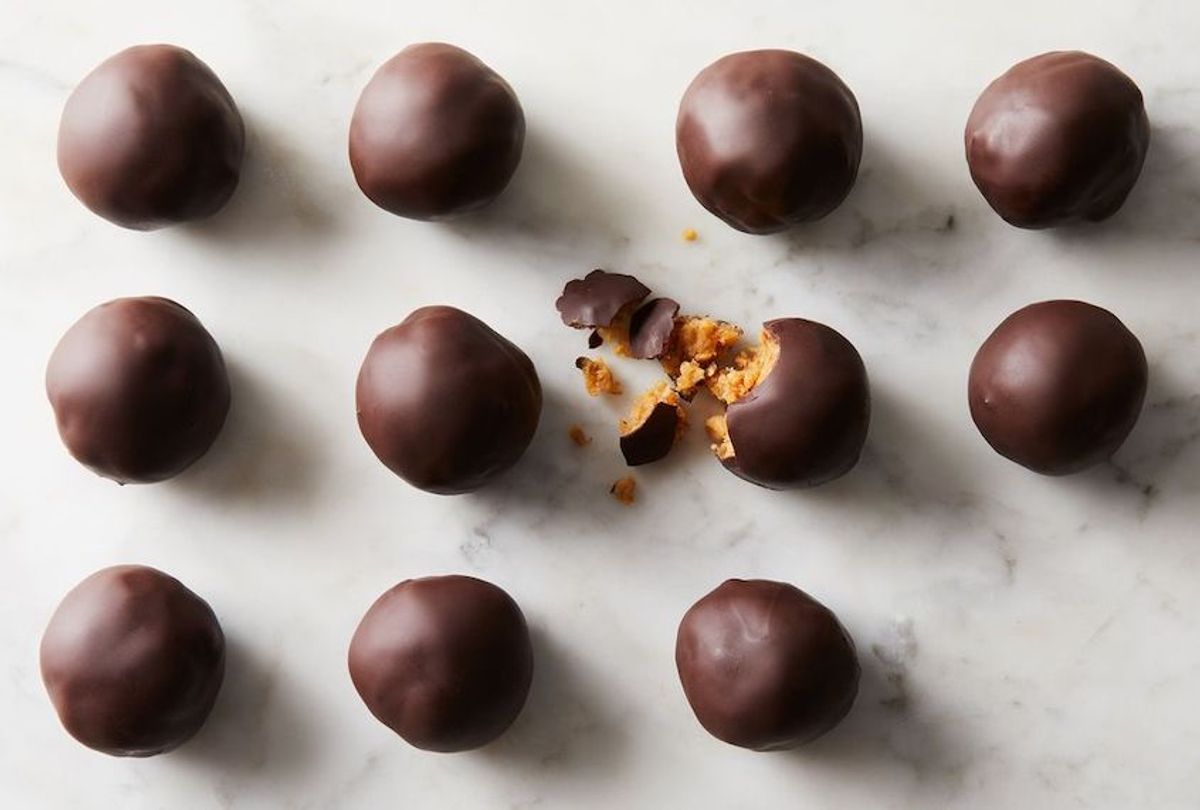 No gift has ever, nor will ever, top the festive ribboned baggies of Grandma Ruth’s chocolate-coated, date-filled peanut butter balls. One for every family member. This is a Christmas truism in my family, even now, nearly three years after her death. This is, I’m fairly certain, our only Christmas truism. Against all odds, it has held fast over many years of divorces, fallings-out, deaths. Through happy events too: marriages, babies, sugar and spice. Recipients have come and gone, but the value of the gift has remained constant.

Even my mom, who has been divorced from Ruth's son (my dad) for over 30 years now, still clamors for them when given the opportunity. And after the divorce, Ruth always had a little bag of peanut butter balls under the tree for me to bring home to my mom (divorced or not, once you’re in, you’re in).

In fact, one of the most heart-wrenching Peanut Butter Ball Stories told in our family comes from my mom. Sometime in the early 90s, a visiting exchange student—oblivious to the preciousness of Mom's stash of peanut butter balls—put them out for a New Year’s party she threw while we were out of the house. We came home to find every last peanut butter ball gone.

You don't mess with another person's stash of Grandma Ruth's peanut butter balls. It just isn't done. But how was she to know?

Every year in early November, like clockwork, we'd hear the rumblings. My grandmother would start tallying—friends, neighbors, relatives. And always on the list, her fellow amateur tap dance troupe members, whom I always suspected got more peanut butter balls than any of the rest of us (though I have no confirmation of this and now guess the truth is lost to history).

Starting when I was 15 or 16, Grandma Ruth would call me and leave a message asking when I’d come out to make peanut butter balls with her. This excursion was always a whole thing. It involved coordinating with my cousin, who lived in Hawai'i but would be home for Christmas, and sometimes also with my half-sister, who was 11 years my junior and lived across town from me. She’d need a ride out to the suburb where Grandma's house was (and it was always clear that ride was expected to be me).

I’d drag my heels. It wasn’t hanging out with my friends, therefore it was a hassle, an act of obligation. Still, we rallied.

And there I'd find myself, sometime around the winter solstice, standing in Grandma Ruth’s cramped, harvest-gold kitchen with a choose-your-own-relative (both of whom, for the record, I love very much), spooning crunchy peanut butter into the bowl of an ancient Sunbeam mixer. Flimsy, tired beaters would slog their way through the generic-brand peanut butter. Groaning, it’d nearly give up the ghost when we’d complicate things, adding a dusty cloud of confectioners’ sugar and chewy chopped dates. Our job was to stand by the churning mixer, using our hands to keep the sweet, cement-like mass from spilling over the side of the bowl as the machine worked. Eventually Grandma would say that it was mixed well enough and we could start rolling the golf ball–sized peanut butter balls.

When we were done rolling, Grandma would perform an impressive act of refrigerator Tetris so that the peanut butter balls could all get a nice, deep chill.

An hour of visiting passed—we’d check on “her” blue jay, Billy, who was often lurking in her tiny backyard, and feed him peanuts, and she’d ask us about school, boys, friends. The messy work of dipping the cold, date-studded peanut butter balls in melted chocolate as quickly as possible, before the heat of the chocolate caused the tightly-rolled balls to lose their shape—this was always the best part of the day. We’d all be a bit punchy by the end of it, buzzing with sugar and the strangeness of so much time together. Then, out into the gloaming with a tiny stash of peanut butter balls of my very own, a secret prize to tide me over until Christmas day.

If this talk of grandmotherly treats and playful infighting over an endearingly lumpy retro confection conjures up an image of a doughy, flour-aproned matron, just shake that off right now. My grandmother and I had a pretty distant relationship—echoes of the one she had with my father. She was a complicated, somewhat cold woman whom I didn’t know very well, despite the fact that we lived in the same city. Relatively remote, and not especially maternal, neither she nor I made particular efforts to be in touch, except at the holidays.

It wasn’t until Grandma was dying that I became preoccupied with her life. It was January of 2017. I was pregnant. It was a quiet, hesitantly happy secret that buoyed me through hospice visits in a way that I felt a little guilty about. And then she died, and then I had a miscarriage.

I cried. Had a cocktail. Moved on. Maybe too fast.

A few months later, I was pregnant again. As Christmas approached, so did motherhood—a looming transformative force, which I often referred to as the Black Hole. Not because it was unwanted or terrifying, but because I couldn’t see into it. The baby was due on December 18, and I was certain he was going to come on Christmas Day.

I couldn’t imagine not giving gifts to our family, though, so as the due date approached, I focused my nesting instincts on homemade Christmas gifts. I’d make up for volume with something little and powerful, something heart-piercingly meaningful. It would be our first Christmas without Grandma Ruth, and I was determined to give out little bags of real-deal Grandma Ruth peanut butter balls. Someone had to do it—the idea of a Christmas without peanut butter balls was indigestible.

Searching through my recipe binder, I was struck to find that I didn't actually have her recipe. After years of making them right by her side, I never bothered to pay enough attention to learn the recipe, to scribble it down and stash it in my binder. I knew the recipe was old—she’d been making them my whole life and before my time. Peanut butter balls obviously had peanut butter in them and were coated in chocolate—the finished product always reminded me of the Miracle Pill in The Princess Bride. But beyond that, I was in the dark.

With a little searching, I found recipes that sounded similar to hers and made adjustments to what I found based on my own taste memories. It seemed that the recipe was a derivative of a peanut butter–date ball recipe from a mid-century Betty Crocker cookbook. But I had no memory of her pulling out a big cookbook when we made them, so I wasn’t convinced that that’s where the recipe she followed every year had indeed come from.

But I remembered that she added paraffin wax to the melted chocolate to make the coating shiny, and to give it a very satisfying snap. I recall, too, my snobbish horror the year I realized that she did this. I was apprenticing with a fine chocolatier at the time, and watched as she casually stirred a stick of paraffin into a panful of Tollhouse morsels.

Hindsight allows me to see who the fool in this scenario really was, of course. As I tried to resurrect her recipe—piecing together fragments of memory and digging around the dusty corners of the internet—I was filled with doubt. I googled “chocolate coating paraffin sub” and “paraffin wax safe to eat,” terrified that it might be sacrilege to leave the paraffin out. I was humbled, finally. A little late (but better late than never).

Our son was born round and healthy on December 12. He wasn’t exactly a Christmas baby after all, although the nurses capped him with a candy cane–striped baby hat instead of the traditional powder blue.

The first year of motherhood hit me like a ton of bricks. Apparently, this is to be expected. Somewhere in the midst of the dazed cocktail of awe and exhaustion that I swam in those early months, my thoughts drifted often to Ruth. Unmoored from the smug certainty of pregnancy, and dwelling instead in the anxiety-twinged prickle of new motherhood, I’d remember that she died, and feel a sort of dissonance. I’d imagine her as a young mother, nearly a decade younger than me (she was in her early 20s when she had her two kids), and think about how she might have felt. I could project things onto her, but I found myself struck by how little I really knew her. I was full of questions that would never be answered, a new curiosity about her life.

Now, I know firsthand the demands of motherhood, and its power to pull us away from ourselves. After years of seeing her as a selfish, distracted, rather uninterested parent and grandparent, I imagine her now as a smart, curious woman who never quite managed to carve out the time she craved to get to know herself. Her high school graduation was followed closely by marriage, the suburbs, and two kids. Time passed, youth passed.

By the time I came into the world, she was in her 70s, and beginning to succumb to a subtle, lightly masked bitterness. She spent a lot of time in her own head. She liked to read, to stay up late, and (sometimes) to have a third glass of chardonnay. She sent me cards for every holiday—including Thanksgiving and Halloween—when I was in college, inscribed only with my name and “Gram Ruth” that primarily served to confuse me.

She made peanut butter balls every Christmas, of course. She ate really, really slowly. These surface facts are about all I know about her, because I didn’t put in much effort when she was alive. And in fairness, neither did she. But now, softened by motherhood, I wish I had tried harder. I wish she’d lived to meet her great-grandchild, and to know me as a mother, so that I could know her with the heart I have now.

Of course, for all my wishing, I can’t change the fact that she’s been gone for three years and the questions I have will simply have to hang in the air, unanswered. Though she is gone, I carry her in me—in my heart, in my mind, in my very biological being.

What I can do, however, is celebrate her life in all of its complexity and realness. Because her great, vast, unknowable life was both of those things, even if she didn't always feel it.

Hunting down this recipe was my small way of working to understand her a little better, to share something with her, to be a witness to her life even after the fact. Handing out her peanut butter balls—mine, now, I suppose—isn’t just a necessary element of our family’s Christmas celebration, although it is very much that. It’s a ritual of remembrance that I perform every year.

Directions
1.In a food processor, blitz the walnuts until lightly ground and then the dates until lightly chopped. Add the peanut butter, sugar, walnuts, and dates to the bowl of a stand mixer and mix on low to combine.

2. Shape the dough into tablespoon-sized balls and place on parchment paper–lined cookie sheets in the fridge.

3. Meanwhile, warm some chocolate in a double boiler on the stove until just melted. Dip the balls in chocolate and place on a waxed paper–lined cookie sheet and place in fridge to harden. Refrigerate until set.

4. Note on Serving Size: I usually triple this and it yields about 65 to 70 balls.