Buffalo is not the easiest place to track down a Virgin, but I was determined to find this specific statue 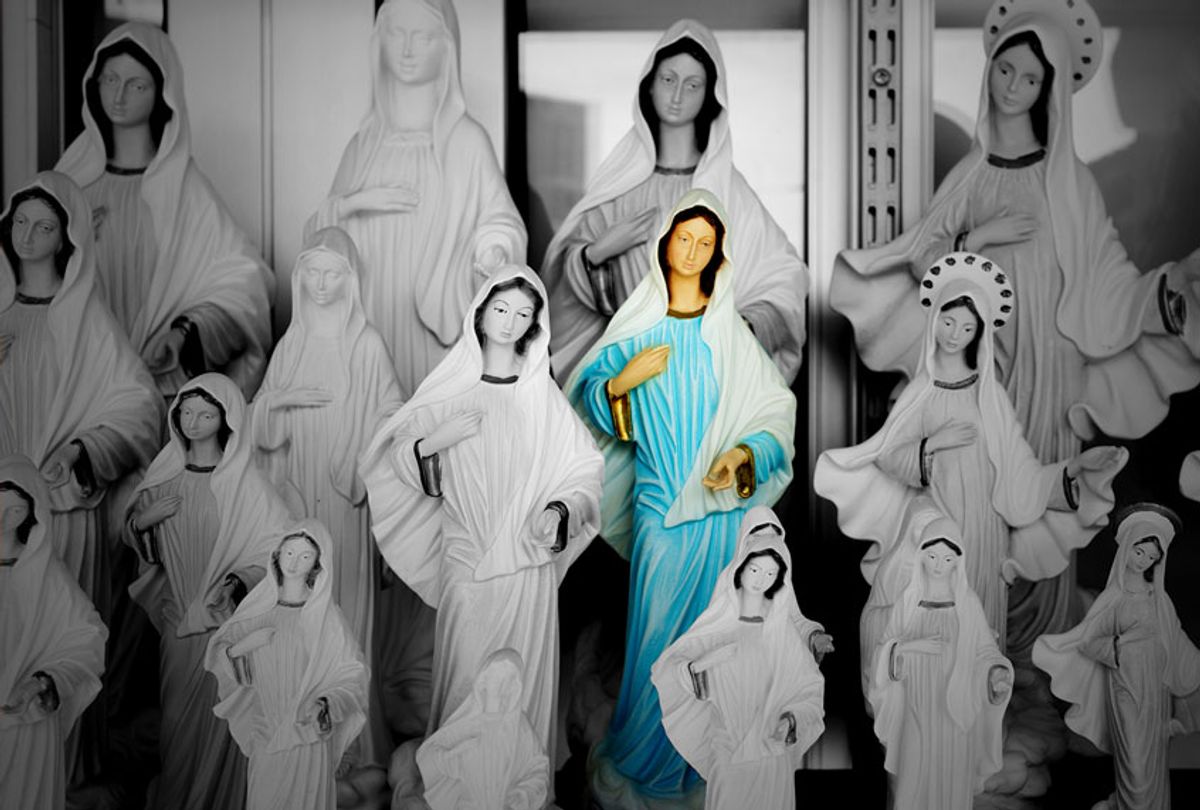 I was a kid, eleven or so, the time I was locked in the church overnight. We were gathered in the hall consuming massive quantities of cookies and punch after the Easter Vigil when my mother embarrassed me. Who knows what she said? She was unpredictable and I was on the cusp of puberty. It was a ripe combination and our clashes were frequent, so perhaps it’s no surprise that something she said sent me flying up the stairs, through the vestry, into the musty walkway behind the altar, past boxes of blue-glass candles and into a cabinet of altar servers’ robes. I folded myself under the line of white cotton hemlines and waited, taking a child’s cruel pleasure in ignoring the sound of my mother calling. Only the scrape of keys in the lock an hour later woke me to the gravity of the situation. I sprung from the cupboard and looked around the room in which I’d been accidentally locked. A carpet was rolled along the length of one wall. A throng of religious statues leaned against the others — their frozen features and glass eyes looking menacing in the dark. The gang of plaster saints and a thud from the church caused me to stuff myself, like prepubescent pimento, into one end of the carpet. I squeezed my eyes shut and waited for morning to come.

It was not quite daylight when the jangling keys returned. I slinked from my carpet and emerged heart-thumping near the altar of Mary. I didn’t want to be discovered—and knew I should run toward the heavy wooden doors—but I hesitated. I was not sure what I would find at home. Even when I wasn’t an ecclesiastical stow-away, I never knew what I’d find at home.

I turned toward the Virgin. She’d stood in the same spot my whole life. I’d looked at her thousands of times, but the light slanting through stained glass was low and golden. Her face was lit with a soft glow, as were her open hands, and the sweep of her sky-blue cloak. Which is how, just before sunrise on Easter morning in the early 1980s, the statue of the Blessed Mother snagged my heart.

My heart was not so snagged that I remained at church. Like nearly everyone my age, I left in my twenties. Unlike everyone else, I returned a few years ago. It was Christmas Eve. The choir sang “Joy to the World.” Poinsettias lined the altar. And I stood staring toward the right-side altar, rubbing my eyes to be certain I was not imagining things. I blinked and checked again. I was not mistaken. My Mary was gone. Another statue stood in her niche. Crowned and set upon a globe, I’d later learn that the new Virgin came from a nearby church that had closed. But then I only looked around, mystified. Where’s Mary? I asked the priest after Mass, but he only shook his head and backed slowly away.

The movement of statues is not so unusual. As parishioners continue to abandon their pews and churches close, sacred objects are reshuffled, discarded, or sold. My Mary’s twin is currently for sale on eBay, for instance. Cast from the same mold, the eBay Mary has been repainted with darker hair, comes with a money-back guarantee, and awaits shipment from Danbury, Connecticut. But I wasn’t interested in replicas. I wanted to know what became of my Mary and made myself into some combination of church lady and Nancy Drew to find out. I searched closets and vestries and hounded people with my questions. The best guess anyone had was that she’d been sold to someone in the next diocese over, which meant the Blessed Mother was lost somewhere in Buffalo.

Buffalo is not the easiest place to track down a Virgin. Thousands of blue-caped figures grace bathtub grottos and garden plots. Because I undertook my quest at the height of the Christmas season, an additional flock of Marys appeared in outdoor Nativity scenes. This did not deter me. What is a deluge of BVMs against a full-blown case of Statue Fever?

I must stop here to assert my levelheadedness. I was then and am now a mix of progressive optimism and cynical realism. A feminist who attended Lilith Fair back in the day and more recently celebrated Hillary’s pantsuit — a woman who leaves violets on Susan B. Anthony’s grave whenever I pass, which is more than one might expect. Now, suddenly, at mid-life, I’d worked myself into a froth over a figure regarded by some as the antithesis of feminine agency.

You’re a freakshow, I said to myself as I booked the hotel room to serve as the headquarters for my search. But even as I said it, I tore a sheet of paper from my notebook and plotted my course.

I searched old churches and new chapels and basements during coffee hours. What I’d do if I found her, I did not know. I moved through the world in a churchy fog. I woke early for Mass, lit candles, and sat in near-empty sanctuaries. Snowstorms waged. Roads iced. I ate pierogi and cutout cookies and listened to the 24-hour Christmas station as I drove from Lackawanna to Lockport to Niagara Falls. The more I could not find her, the more I could not let her go.

I encountered marble Marys, Marys so old their capes puckered and flaked, and Marys cut from a single French oak, but the one I sought was more run-of-the-mill. She was not crowned or haloed. You had to squint to see the gold-leaf detail along her hemline. A chin that rounded into a babyish swell was the only hint of indulgence — that, and her mantle, which was the color of oceans on old globes, of swimming pool tiles and the sky on certain winter mornings when everything is new. The blue is what I remembered as I walked into sanctuaries and out again into the snow. I became someone from an English novel sweeping the moors for a lost love — except the moors were North Tonawanda and my love was fashioned of plaster and horsehair.

Cast in the 1930s by Chicago’s Daprato Studios, my Mary was cut loose from her mold, sanded and cured, painstakingly painted and dried again, before being shipped from the shore of Lake Michigan to Erie and east again to Ontario, where she landed at the mouth of the smallest Great Lake. She was unloaded by the sons and grandsons of Irish immigrants who’d come west on the Erie Canal 50 years earlier and installed beside the main altar of Corpus Christi Church.

My quest to find her followed the traditional pattern. I searched and searched until the searching broke me open with longing. Only when I’d given up and headed back east along the Thruway did I receive the final clue that sent me back to Buffalo. It almost does not matter whether I found her, whether her face was even sweeter than I remember, whether her cloak was a thousand morning glories, and whether I set my hand upon her while something like violins went off in my head.

That my Mary is not alive does not sway my affection. Stability counts for something and fixedness is what statues do best. Unlike the house of seven children and the overworked single mother I came from, Mary is not subject to whims. Unlike the clerics whose outdated notions of purity make it difficult to attend Mass, Mary is locked into a position of unflinching love. She’s a statue, yes — but a statue is no small thing. She’s a more identifiable and enduring symbol of Catholicism than even the pope — and a beacon of humility in the face of an increasingly bombastic Christian world.

As a child I unthinkingly adored her. As a young woman from a neighborhood where girls were more likely to have babies than graduate high school, I rejected her unyielding acquiescence. As a woman at mid-life, I’ve begun to see that her features are cast not so much in submission as in luminous contemplation — as if Mary has something on her mind and has been chewing it over for two thousand years — as if she’s caught forever in the moment the angel appeared and rocked her world with the news that she, a nobody girl from a Podunk town, could give herself over to something larger than the snare of her surroundings.

Perhaps that’s what I saw all those years ago as I emerged from a rolled carpet after a night of tears and shame and fear. Not an obedient virgin so much as a young woman, hushed and lowly in the eyes of the world, blooming in the front of church. A statue, yes. But more than that. A sign of how wondrous even a poor girl could be.

Sonja Livingston is the author of four books of literary nonfiction. Her latest, "The Virgin of Prince Street: Expeditions into Devotion," was published by University of Nebraska Press. Her award-winning essays are widely published and anthologized. She teaches in the MFA program at Virginia Commonwealth University in Richmond.