In USA's clever potboiler "Dare Me," mean girls can be murder 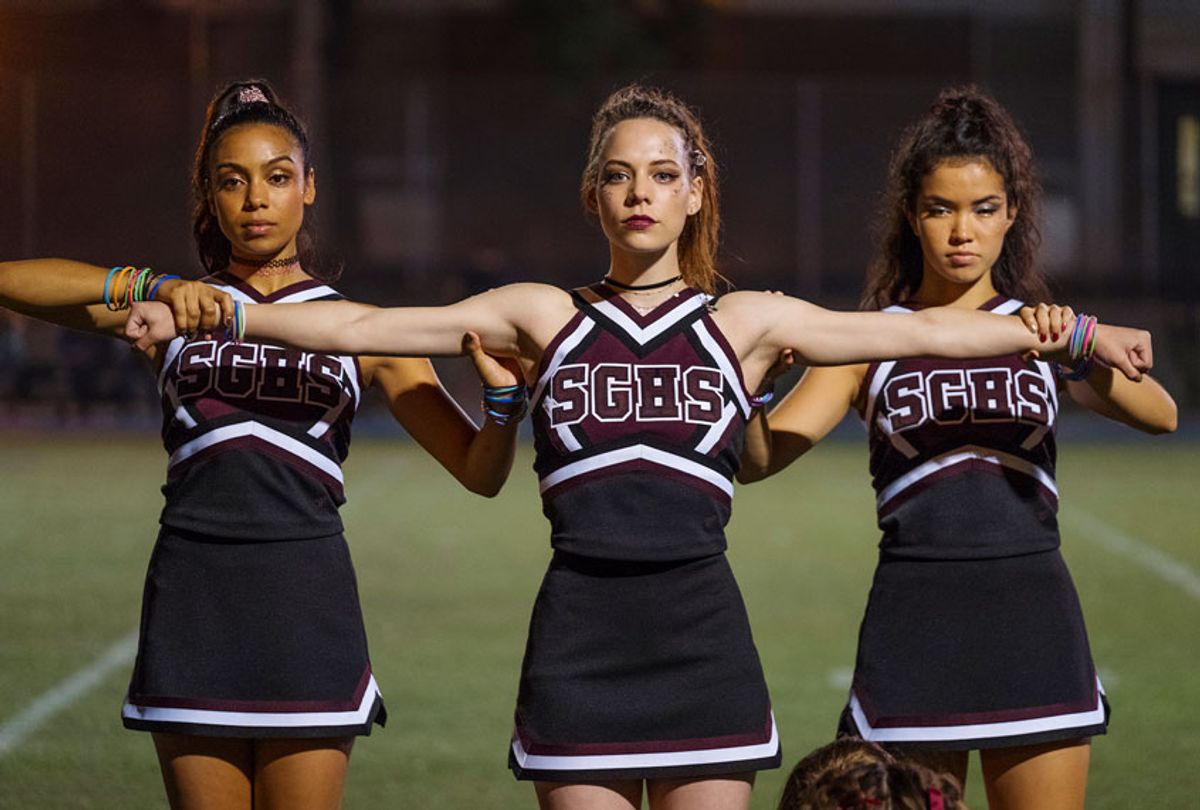 “Dare Me,” USA’s new drama about competitive high school cheerleaders, may remind a person about all they’ve learned from nature documentaries starring animals who live and die by their claw and fang. First, however, we're obliged to move past comparable works that immediately come to mind.

HBO’s “Euphoria” is an understandable frontrunner given the similar demonstrations of wild child behavior from the outset. Its cheerleaders exist in the shadow of “Bring It On” and “Mean Girls,” and since the plot revolves around a murder we may want to hold it up to the light of “Heathers,” “Jawbreaker,” and other movies about high school princesses gone wrong.

Then again, maybe it’s also “Gone Girl," swirled with a hint of "Dateline."

All of this hides what “Dare Me” actually turns out to be, which is a potboiler where the audience is rarely sure of who the predators are and who is the hunted. The camera and script are trained upon specific types we’re conditioned to see as fragile and worthy of our sympathy, or our admiration, or our scorn, only to turn around 180 degrees and reveal them as something else entirely.

And its entirely reliant upon the perspective of the series narrator Addy Hanlon (Herizen Guardiola), who calls herself the keeper of secrets for her best friend Beth (Marlo Kelly) as well as her cheerleading coach’s top fan. In the same weary voiceover she’ll talk about Beth, or even to Beth, as she’s talking with us.

But she reserves her most solid and reverential tone for Coach Colette French (Willa Fitzgerald), a returning hero from a previous generation of cheerleaders who who takes the reins of Sutton Grove High School's present-day squad.

“There’s something dangerous about the boredom of teenage girls. Coach said that once,” Addy’s disembodied voice observes at the very beginning of the pilot, setting the stage for all that happens after.

“Dare Me,” based on a novel by Megan Abbott, tricks us by digging into common presumptions about girls and women, and specifically about these girls and women.

Telling a tale about horrid girls in cheerleader uniforms is too easy and obvious, and Abbott, who co-wrote the pilot alongside fellow executive producer Gina Fattore, knows this. Initially “Dare Me” primes us to direct our ire at Beth, and true to form, she’s a hard-drinking, risk-taking party girl.

Beth's every action is part of a vendetta against her absentee father (Paul Fitzgerald) who abandoned her and her mother and uses his influence in their small town to impose his will on Beth’s school and her life.

But it could be that Beth, for all of her brazen meanness, isn’t the scariest predator in town. She may exhibit all the quintessential traits of a bad friend — emotional manipulation, withholding affection and threats of replacement — but Kelly tempers her spikiness with a reserve of sadness underneath all that performative confidence. She and Guardiola give magnetic performances as a pair of teenage friends who believe they have the high school’s social ladder on lock.

Of the two, Guardiola’s Addy is the more unsure of where she stands, in part, as a matter of economic class – Beth’s father is wealthy while Addy is the child of a single mom who works as a cop. The actor humanizes Addy’s ambition and intelligence with a warmth meant to places the viewer on her side; Guardiola plays up Addy’s sweetness when we’re looking but it seems as if Beth is not. When all eyes are on her, however, she’s as cool and mean-spirited as her partner in crime.

Among the three leads, Fitzgerald’s performance is the most enigmatic, and at first I wondered whether she was merely coming off as flat. But as the reality of who Colette French is begins to show itself, Fitzgerald's demeanor registers more as a practiced affect.

In front of the students, fellow teachers and the school’s financial boosters (i.e. the rich kids’ parents) she’s barely emotional. But when Colette takes a shine to Addy, Fitzgerald turns up Colette's charm, intentionally appearing vulnerable to this promising young person in a way she doesn’t show to anyone else.

Colette drills her squad into greatness and rewards them with parties at her home where the alcohol flows freely.  But to Addy, the girl so unlike anyone else in that dinky little town, she lets slip that the suburban fantasy about the baby and the big McMansion is there to lure unsuspecting young girls into a compromised existence.

And as the cheerleading squad’s performance improves, its social ecosystem rearranges in dangerous ways, mostly to benefit the true predator taking advantage of what she knows about her prey. The murder teased in the premiere episode is nearly incidental beside the script’s exploration of skin-to-skin closeness of female friendships and the means by which they can morph into dependency, envy, and calculated poison.

That emphasis makes “Dare Me” a  worthwhile time investment for midseason, offering something more venturesome than your standard good time with bad people. It's a safari tour among commonplace predators so accustomed to feasting on readily available prey that they don't catch the scent of a fresh danger before it closes in.